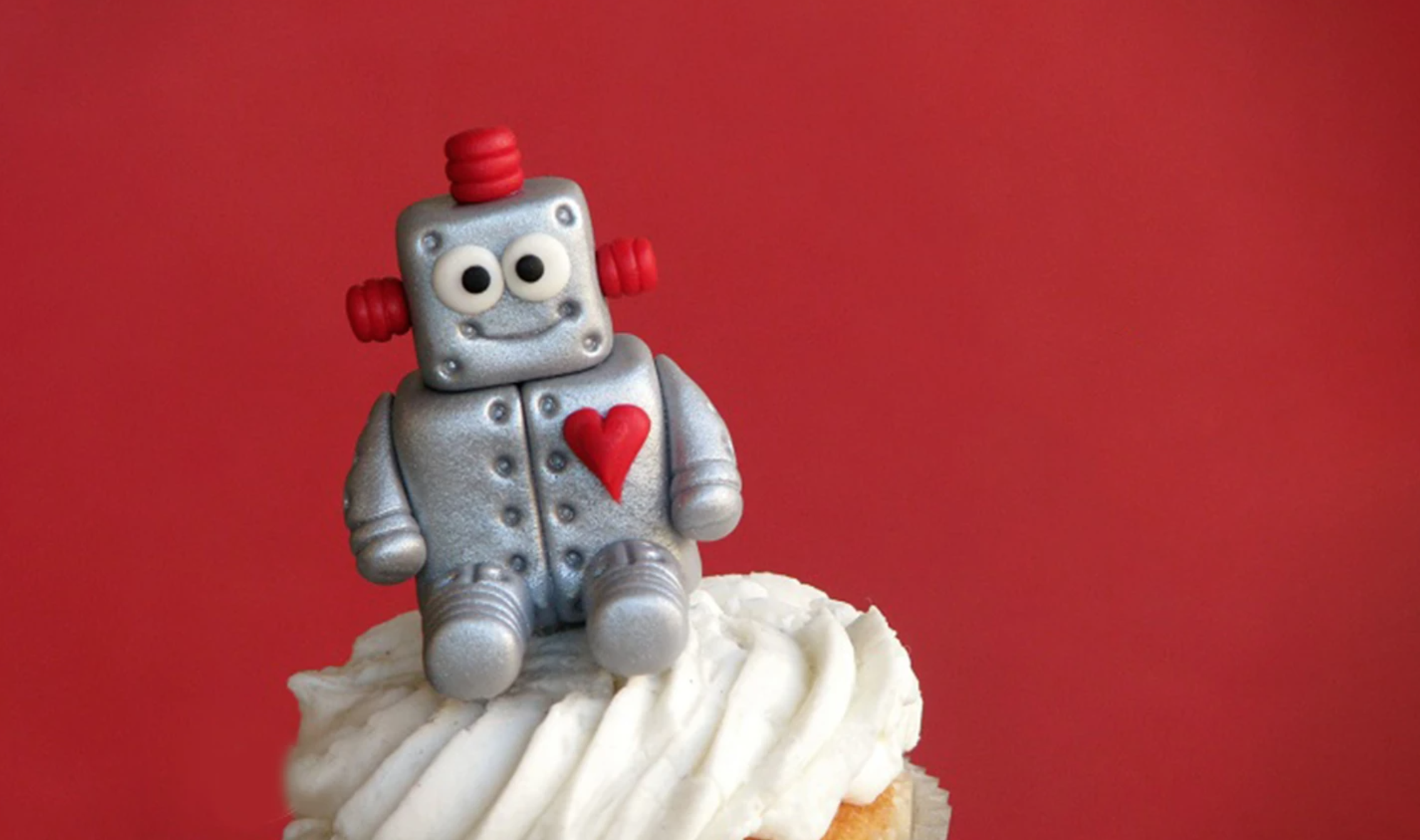 Who says you can’t teach a robot to love? This little guy is shining with Valentine’s Day spirit, and he’s guaranteed to look oh-so-cute on top of your holiday cupcakes. Make him while blasting “Love Machine” to truly get in the heartfelt mood. 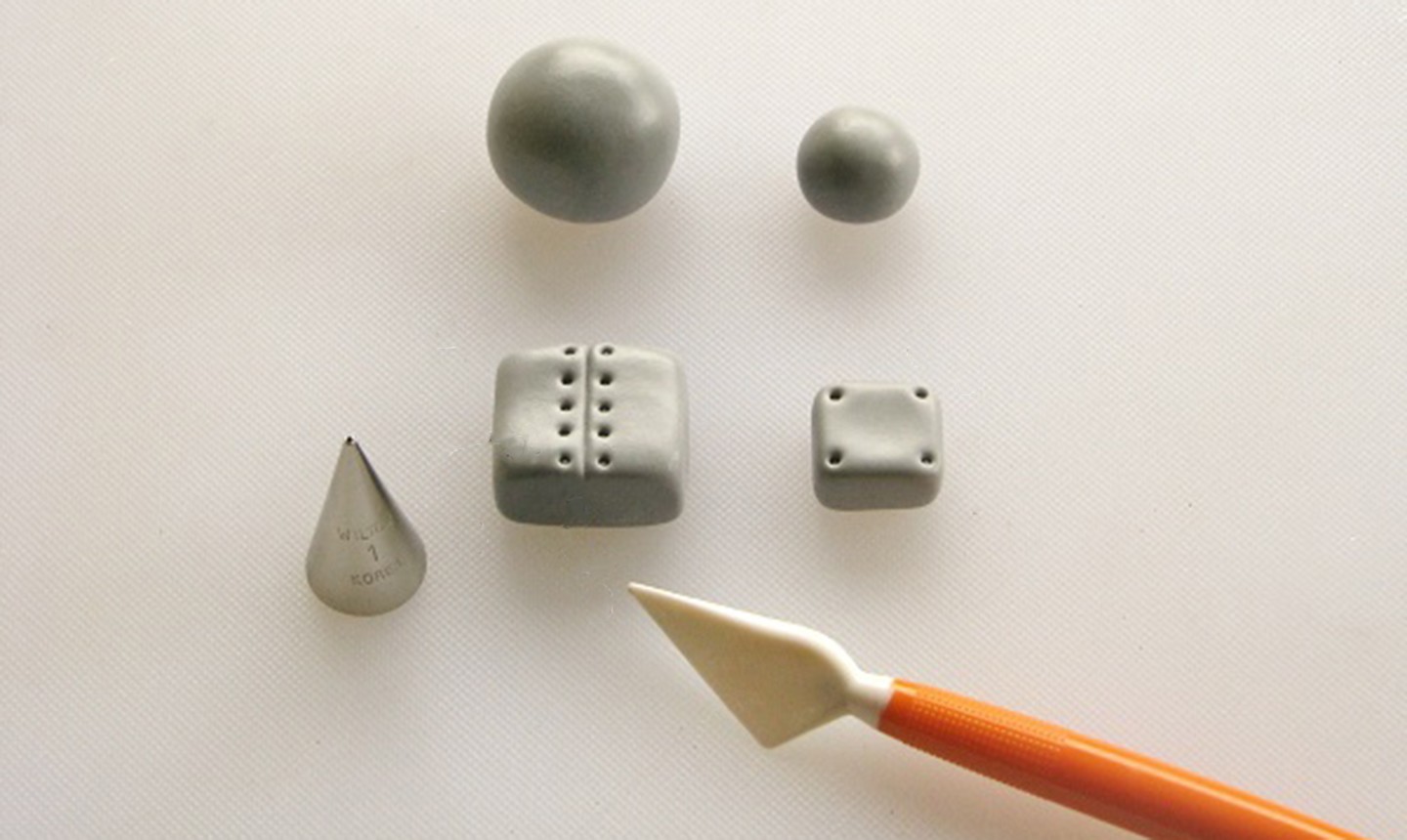 Roll light gray fondant into a 1¼” ball and a ¾” ball. Dip your fingers in vegetable shortening and shape both balls into squares. Pinch the corners so they’re squared off as much as possible.

With the knife tool, mark a vertical indent in the center of the larger fondant square (the robot’s body).

With round piping tip #1, make little indents on both sides of the horizontal line, approximately five on each side. Then, make small indents on all four corners of the small square (the robot’s head).

Use the small circle cutter to make an indent for the smile. Add dimples with the piping tip. 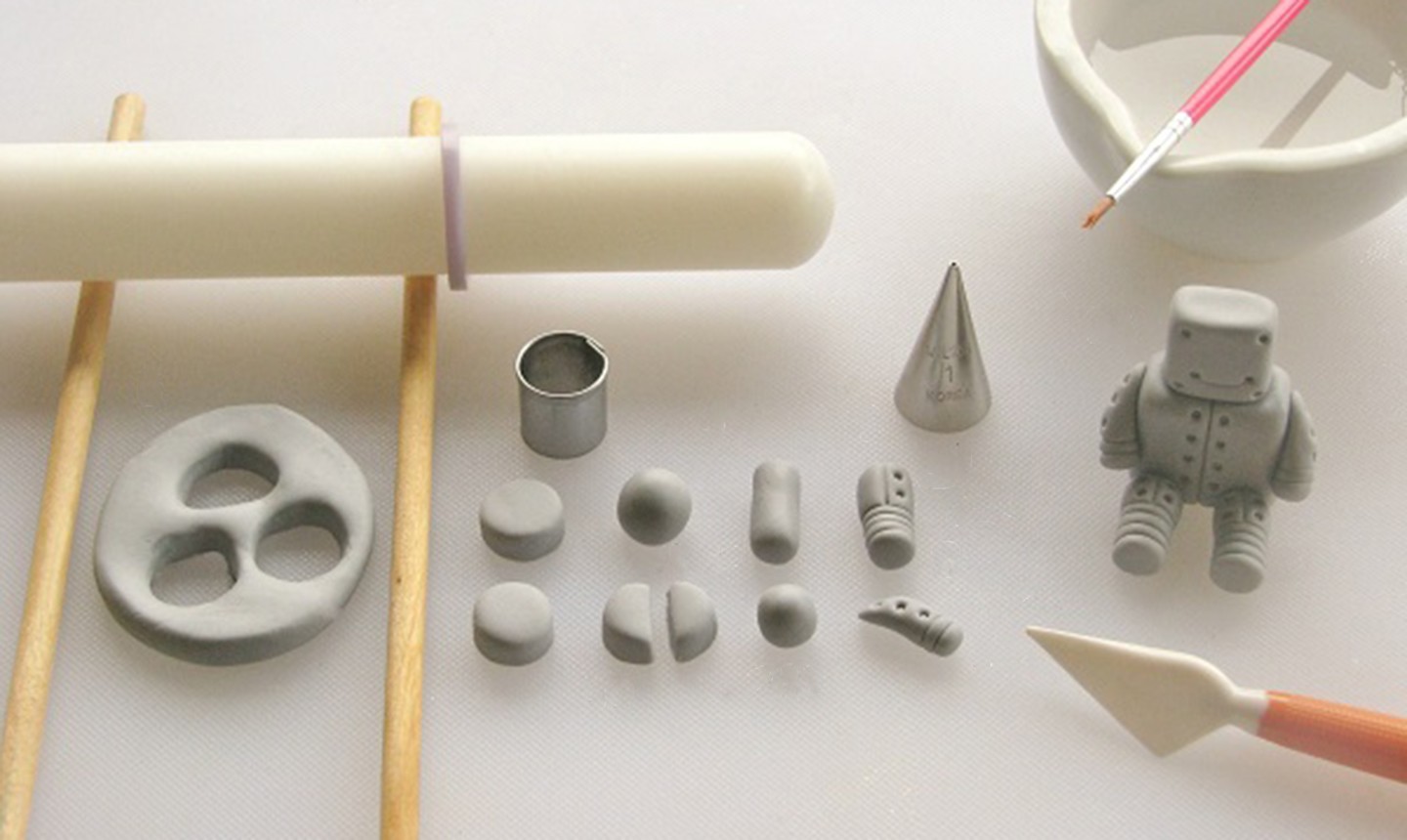 Roll out light gray fondant, using the wooden dowels as guides until it’s ¼” thick. Cut out three circles with the small circle cutter.

Roll two of the circles into balls and form them into cylinder shapes, flattening out both ends with your finger. With the knife tool, indent three lines all the way around the bottom half of the cylinders.

Make a vertical indent up the center of the top half of the cylinders (where it is still bare). Use piping tip #1 to add two indents on either side of the center lines.

Take the final gray fondant circle and cut it in half. Roll each into sausage shapes and detail them in the same manner you did the legs, using the knife tool and round piping tip #1.

Shape the top of the arms by flattening them out a bit and forming them to the sides of the body. Use edible glue to secure the arms and legs to the body. 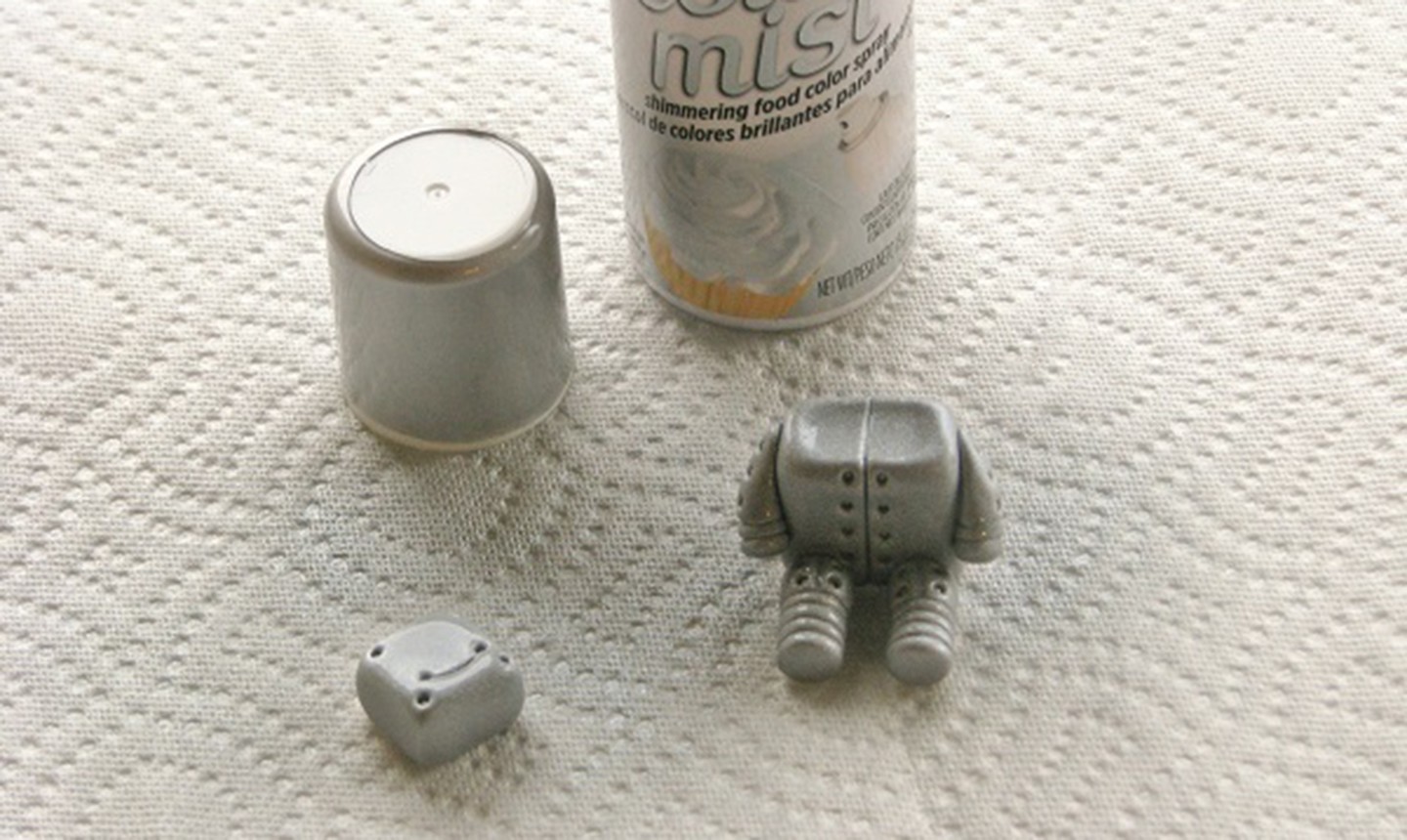 Place your fondant pieces on a paper towel or parchment paper. Spray silver food coloring until all pieces are completely covered. Let dry before moving on to the next step.

Roll out white fondant with the rolling pin and ⅛” guide rings. Cut two circles with piping tip #10 for the eyes and glue them to the robot’s face.

Roll out black fondant in the same way. Cut out two circles with round piping tip #3 and glue them onto the white eyes.

7. Give Him Some Love 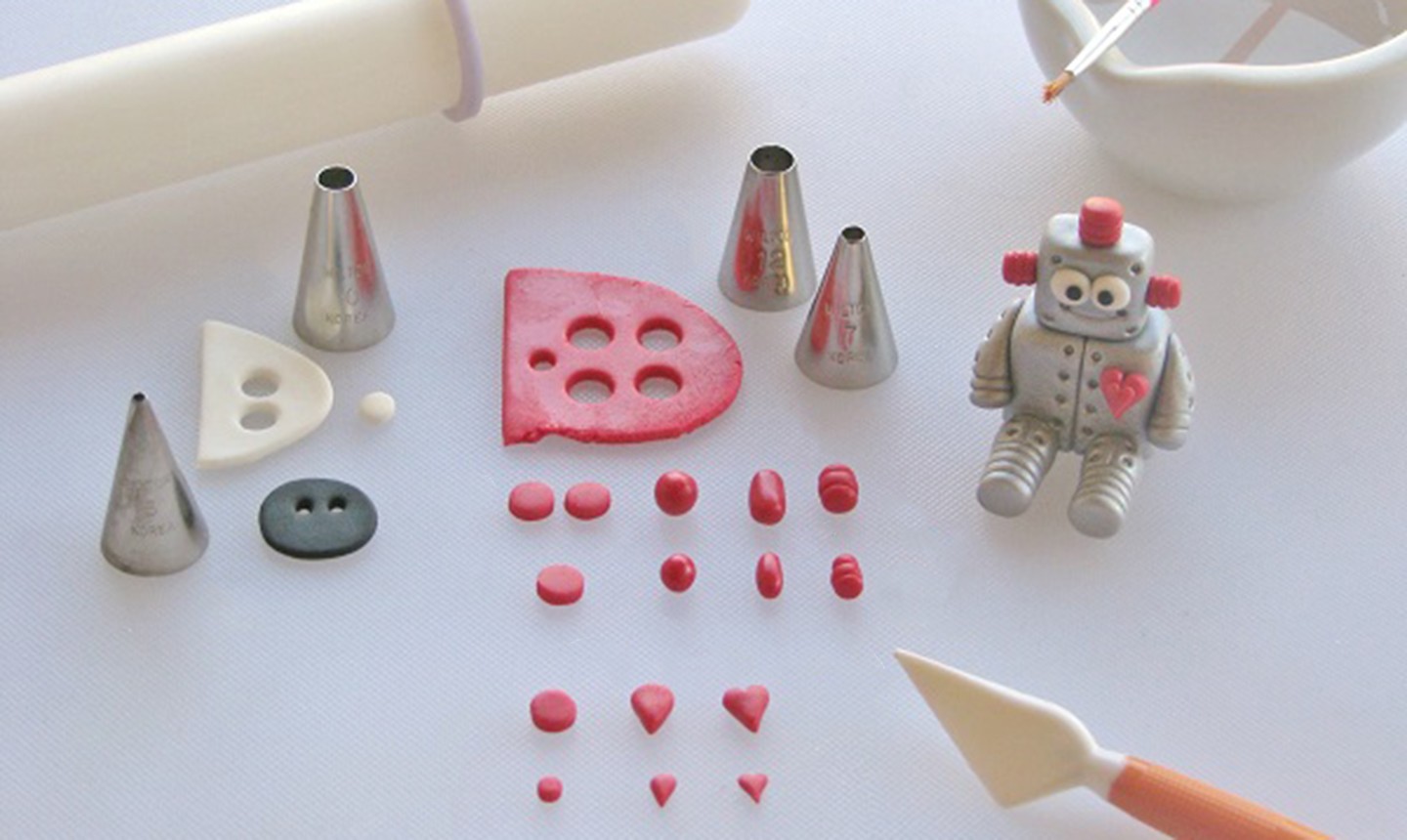 Combine one smaller red circle with a larger red circle, roll them into a ball and then form it into a sausage shape. Make two indented lines all the way around the perimeter, just like you did for the arms and legs. Press the two ends together to condense them a bit, then glue these knobs on top of the robot’s head.

Make two more knobs with the two larger circles. Glue them on either side of the robot’s head.

With the remaining large red circle, pinch one end together and indent the opposite end with the knife tool to make a heart. Glue it to the robot’s chest. Make an identical heart with the remaining small circle and glue it in the center of the larger one.

Finally, glue the robot’s head to his body and watch him come alive!