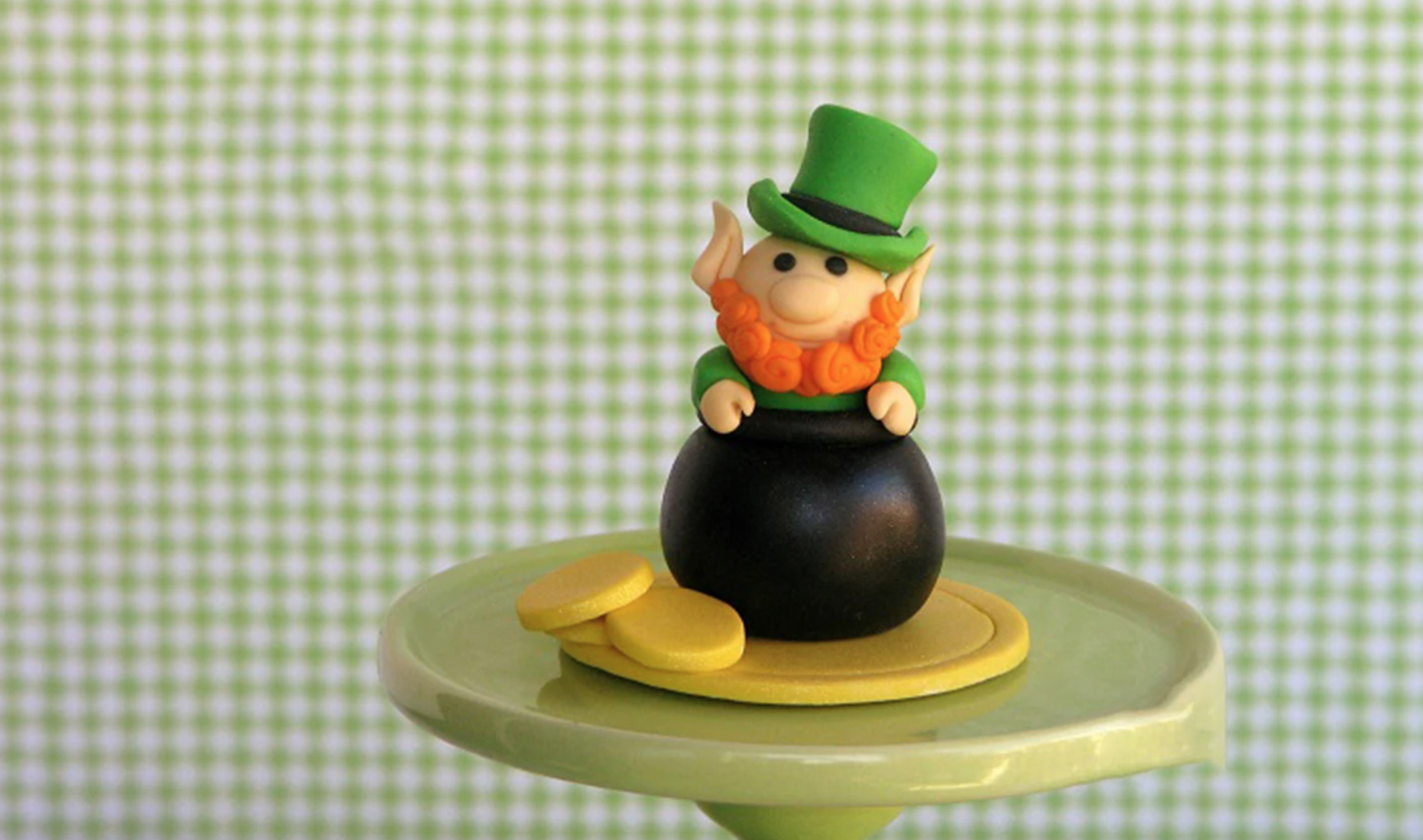 No matter what you’re baking for St. Patrick’s Day, this cute (and lucky!) leprechaun is a must-have decoration. Use it for your cake, cupcakes or anything else getting covered in buttercream. 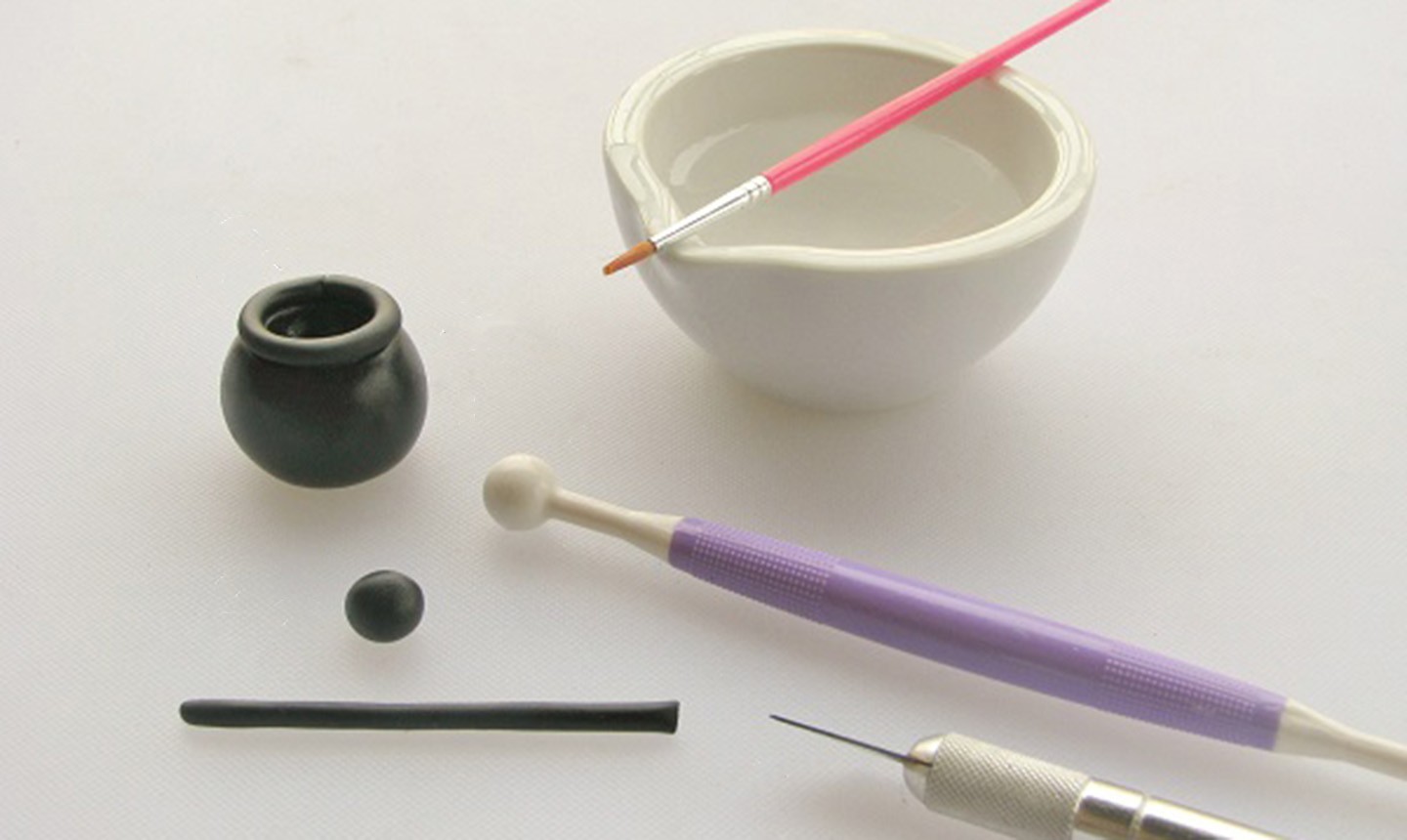 Roll black fondant into a ball approximately 1¼” around. With the ball tool, make a circular indentation in the top center to form the pot. Make sure the opening is both large and deep enough to insert the leprechaun later.

Roll out another piece of black fondant into a snake. Fit this strip around the opening and cut off the excess with your X-ACTO knife. Adhere it with edible glue and press into place with your fingers.

2. Form the Body and Head 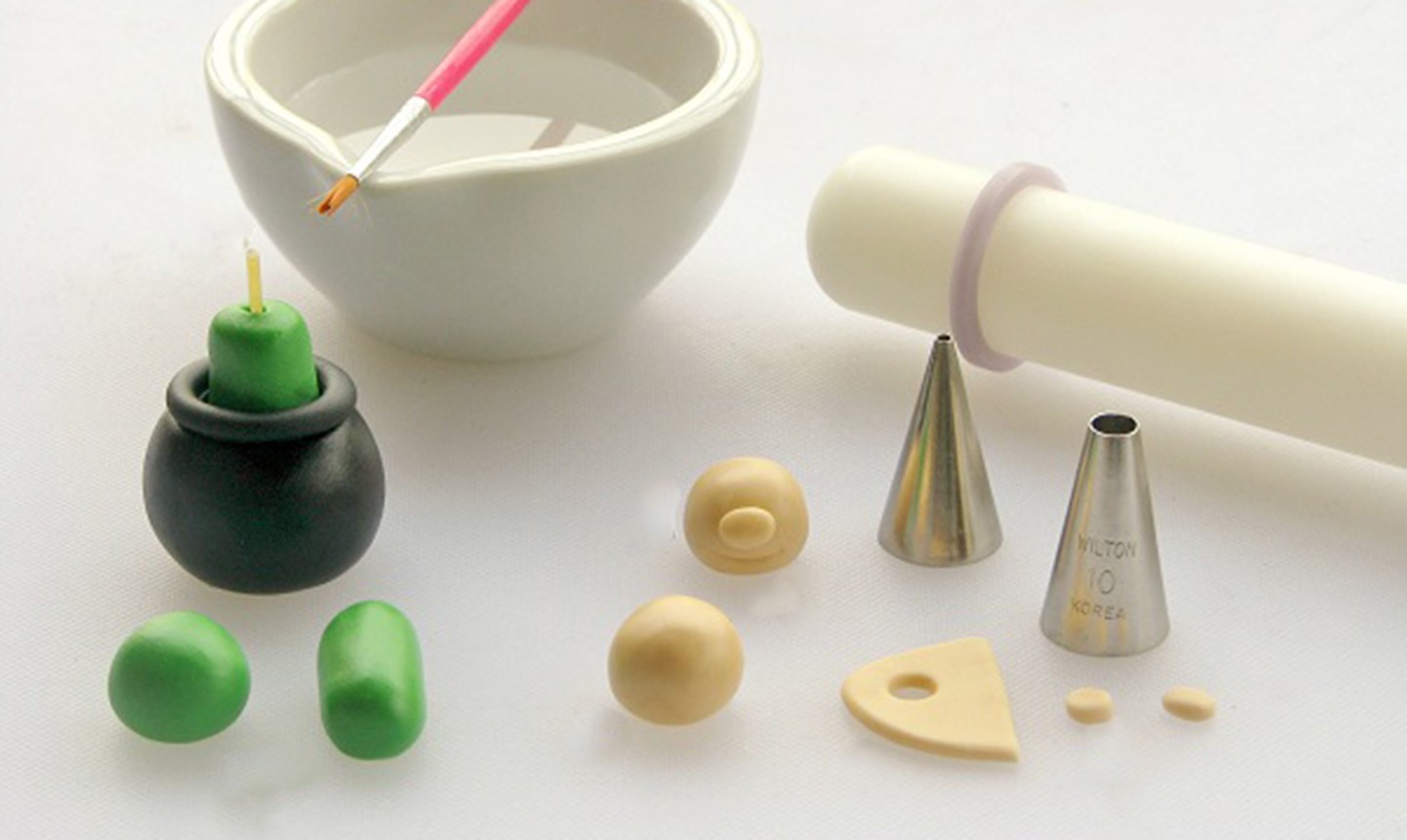 Roll green fondant into a ball approximately ¾” around, then shape it into a cylinder to form the body. Gently twist a piece of raw spaghetti through the center, then glue the fondant inside the pot.

Roll the ivory fondant into a ball about ½” around to create the head. Place it over the body — don’t use any glue yet — to make a hole with the raw spaghetti. You’ll use this hole when the head is finished.

With the larger end of piping tip #3, make a semi-circle indent on the head to form the mouth. Turn the tip around and use the small opening to indent dimples on either side of the mouth.

Roll more ivory fondant until it’s ⅛” thick with your rolling pin. Cut out a circle with piping tip #10. Shape it into an oval nose and glue it above the mouth. 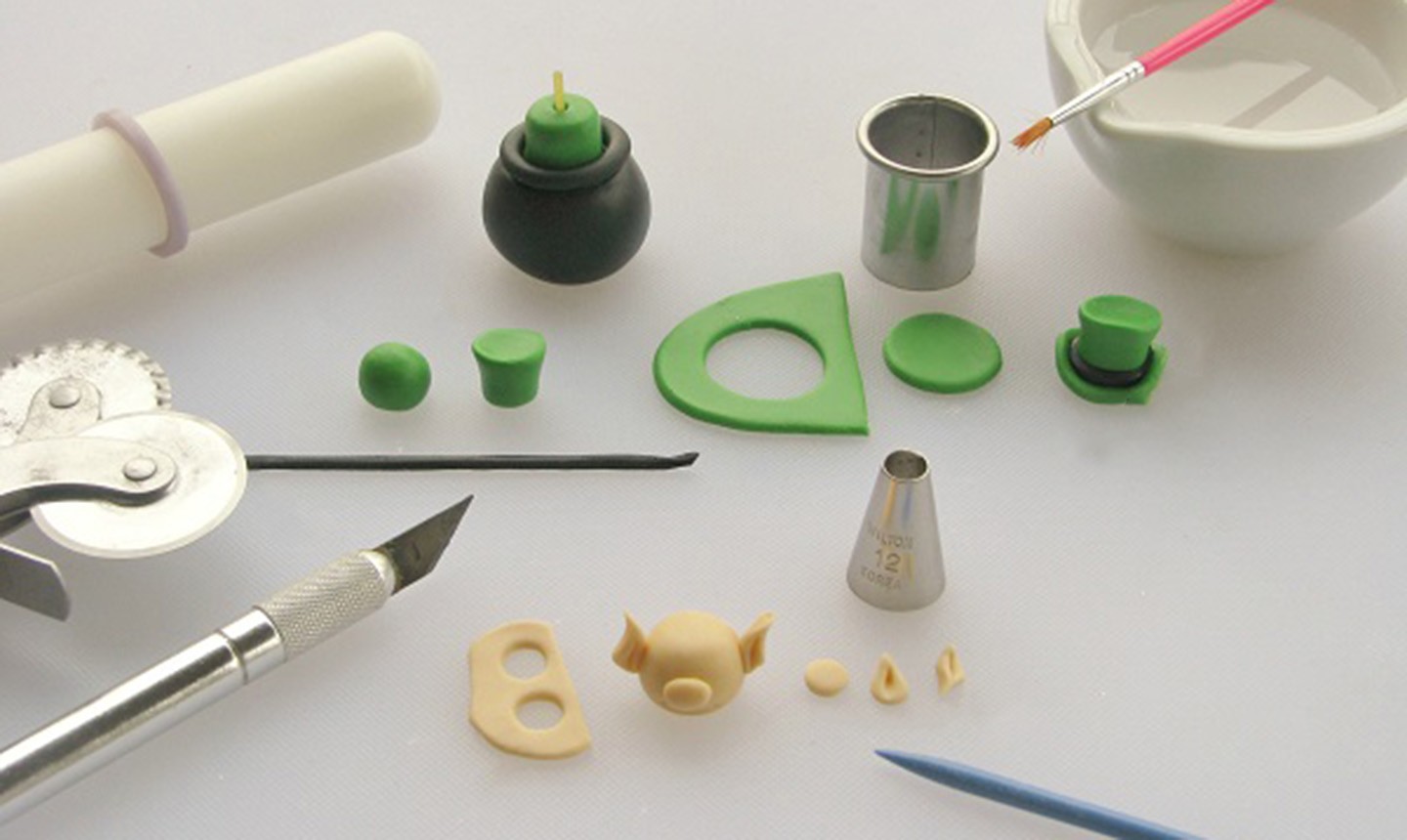 Roll green fondant into a ball that’s a bit smaller than ½” around. Shape it into a top hat, narrowing the bottom a bit and flattening out the top.

Roll more green fondant with the rolling pin until it’s ⅛” thick. Cut out a circle with the ⅞” round cutter. Use your fingers to gently pull it into an oval.

Glue the top of the hat to the bottom green oval. Then shape the oval so the longer sides are lifted up. Add glue to help it firm up.

Roll ivory fondant with the rolling pin until it’s ⅛” thick. Cut two circles with round piping tip #12. Pinch one end, then make an indent with the small modeling stick. Shape the other end to form the ear against the leprechaun’s head. Repeat this for the second ear and glue both into place. 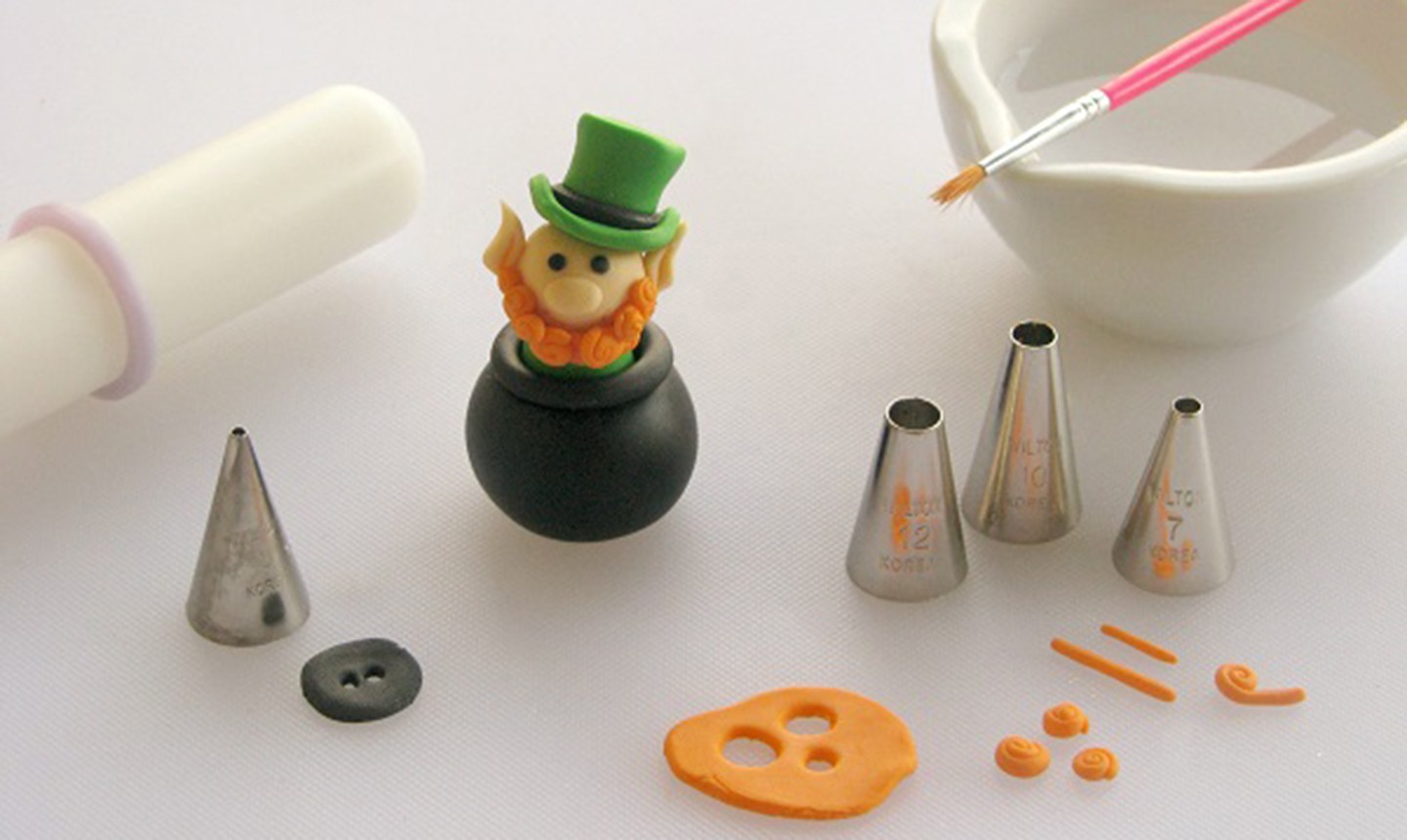 Roll black fondant with the rolling pin until it’s ⅛” thick. Cut two circles with piping tip #3. Glue the circles to his face to form eyes.

Roll orange fondant with the rolling pin until it’s ⅛” thick. Use decorating tips #7, #10 and #12 to cut circles in several different sizes. Roll the circles into balls, then into long snake-like strips. Coil the strips into themselves, making little orange spirals. Glue the spirals to the leprechaun’s face to give him a ginger beard.

Pro Tip: Place the smallest spirals by the ears, cascading down so the larger ones go around the chin.

Place the head on top of the body, lining it up with the spaghetti hole you made in step 2. Glue into place, then glue the hat to the top of his head. 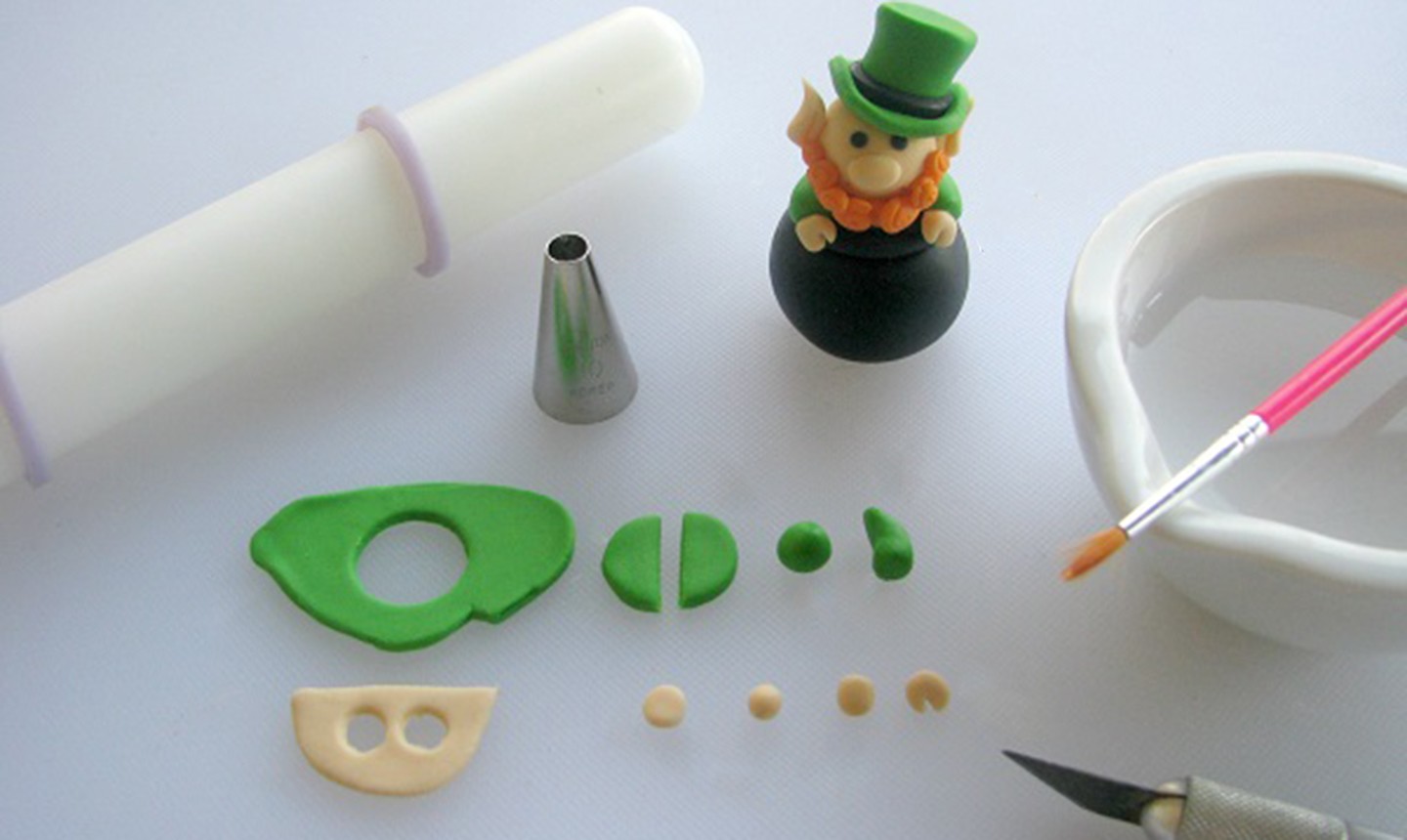 Roll green fondant with the rolling pin until it’s ⅛” thick. Cut a circle with the larger end of piping tip #10, then cut the circle in half. Roll the two halves into balls, then shape them into sausages. Press one end to form around the leprechaun’s sides — these are the arms.

Roll ivory fondant with the rolling pin until it’s ⅛” thick. Cut a circle with the larger end of piping tip #10, then cut the circle in half. Roll the two halves into balls, then shape them into ovals. With the X-ACTO knife, make a small slit on each to separate the thumb from the rest of the fingers.

Glue the arms and hands to the leprechaun’s body, over the black pot.

6. Give Him a Golden Base 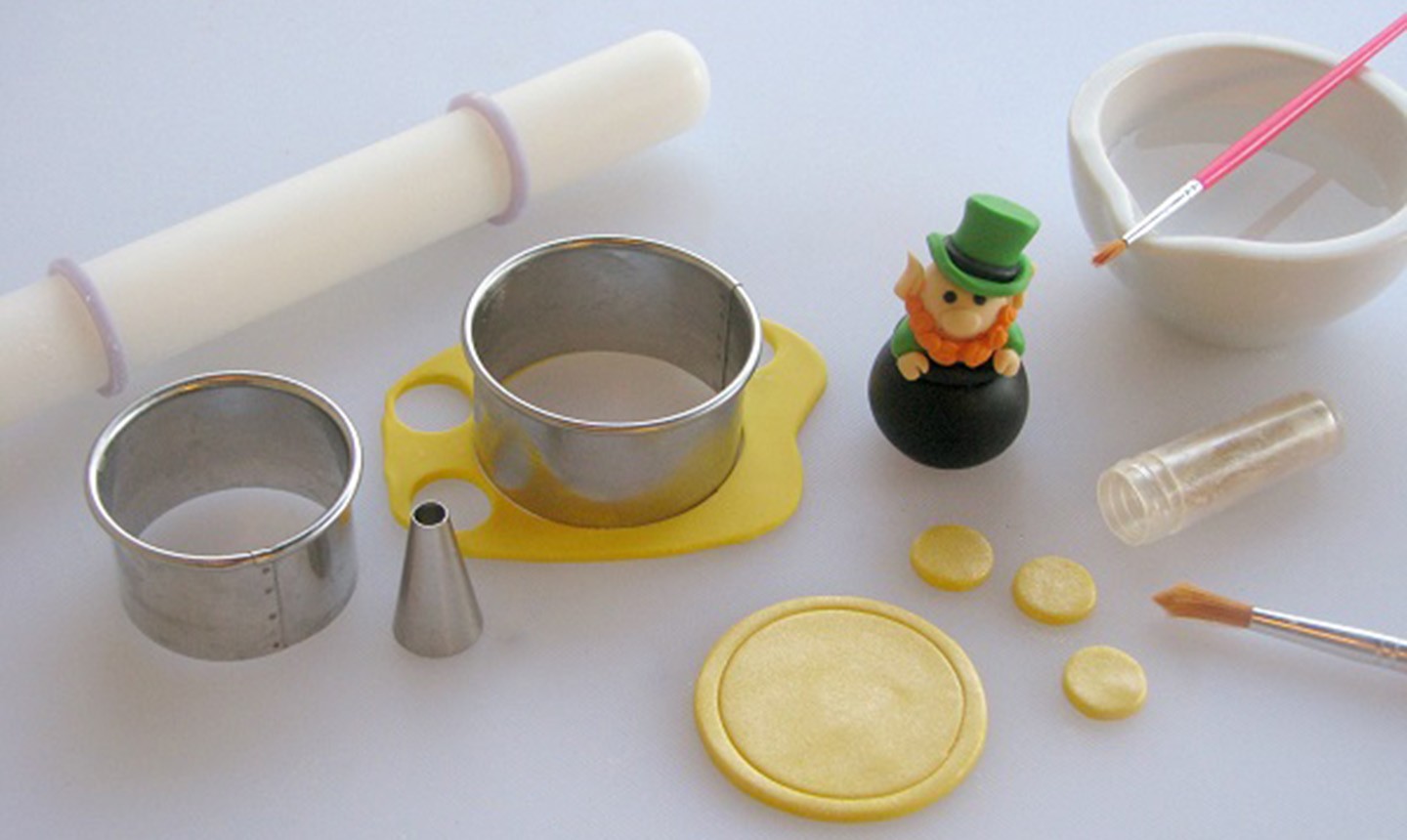 Roll out yellow fondant with the rolling pin until it’s ⅛” thick. Cut a circle with the 2¼” round cutter. Use the 1⅞” cutter to make an indent within the circle to form the gold coin.

Use the bottom of any piping tip to cut a few smaller coins out of yellow fondant. Brush all the coins with gold luster dust and let them dry.

Glue the pot onto the coin base, add the smaller coins to the side and you’ve got yourself the luckiest fondant topper around.