King Cake — which, in a way, is more of a pastry — is a delicacy of food and cooking so garish that you can’t help but smile. After all, this yeast-risen, ring-shaped cake, often stuffed with a decadent praline or cream cheese filling, resplendent with a shimmering coating of gold-, purple- and green-tinted confectioners’ sugar icing, and sometimes even garnished with a paper crown and plenty of brightly colored plastic beads, is associated with the living-out-loud festival in New Orleans known as Mardi Gras. And what occasion would call for a more ostentatiously appointed New Orleans treat? The Mardi Gras parades kick off in New Orleans today, so why not begin the celebration by learning how to make a king cake?

Learn the history of the king cake and how to make it, here: 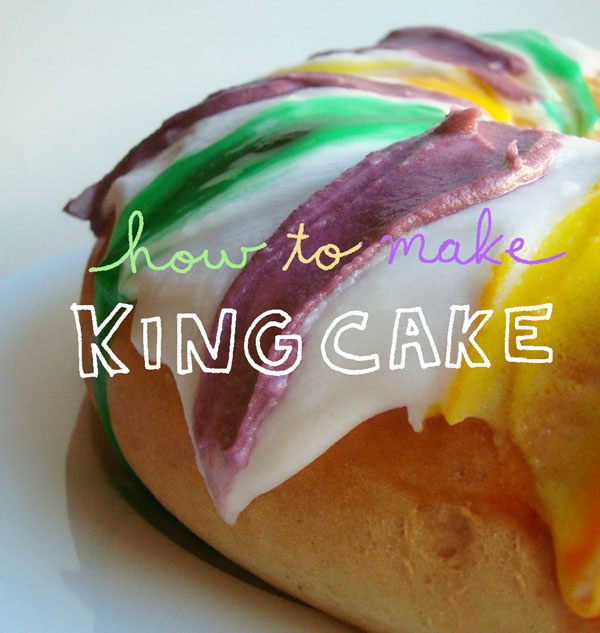 Though this yeast-risen pastry is more like a coffee ring than a light and fluffy cake, the techniques in Craftsy course The Wilton Method: Baking Basics will still help guarantee baking success, helping you measure, sift, and combine ingredients correctly. After all, you need a perfect cake to decorate for your Mardi Gras party.

This Technicolor dessert has evolved quite a bit over the years. The American King Cake is a direct US descendant of the French gâteau des rois, which is made with brioche dough and candied fruit, too.

Like its French cousin, Louisiana style king cakes are served as part of the feast of the Epiphany–traditionally starting on January 6 (you know, the day Christmas lights should really be taken down), and ending with Three Kings Day, the first day of Lent. This explains the royal name, too: it comes from the three kings of biblical lore. Part of the later tradition became to crown a mock king of celebrations, the king being whoever found a trinket (originally a bean) in the cake at the festivities. The Epiphany celebration is a forefather of the modern Mardi Gras, a necessary bit of good-humored excess before the solemn days of Lent.

In New Orleans, where the King Cake reigns supreme, there are many festive decorating variations. Usually, the colors purple, green, and gold, which respectively represent justice, faith, and power.

What about the baby? 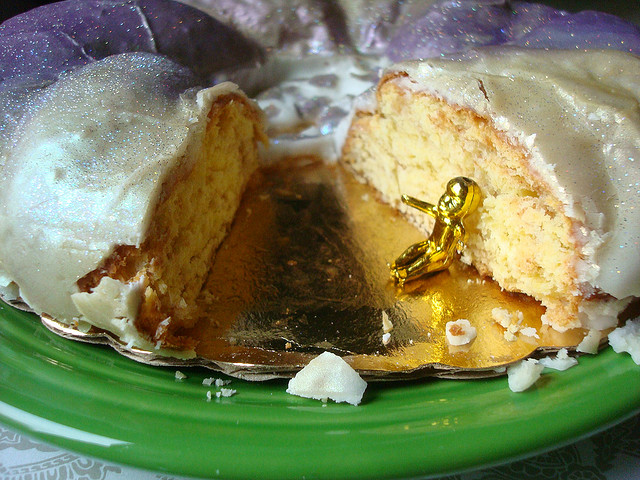 You’ve heard of the slightly wacky tradition of baking a small naked baby figurine inside the cake? Hiding a trinket inside the cake is a long-standing tradition–it was originally a bean, or fève. In France, bakers release limited-edition fèves, and collecting them becomes a bit of sport. But with our American king cake, it’s most often that naked baby. Why? Some say it represents the young Christ of the Epiphany; true or not, there’s a much more fun story: apparently, a New Orleans bakery chain got a large shipment of plastic dolls from Hong Kong in the 1950’s (hey, they were really cheap!) and had to use them up—so into the cake they went. Who knows the real truth, but it makes a good story.

It’s good to be king

While it’s good to be king or queen–royal duties include leading the drinking and merriment, as well as the power to command others to act upon your whim–don’t despair if you don’t get the coveted bean or baby. Aside from saving precious tooth enamel, the king or queen is frequently appointed to pay for the night’s drinking, or to buy the cake and host the party the next time. 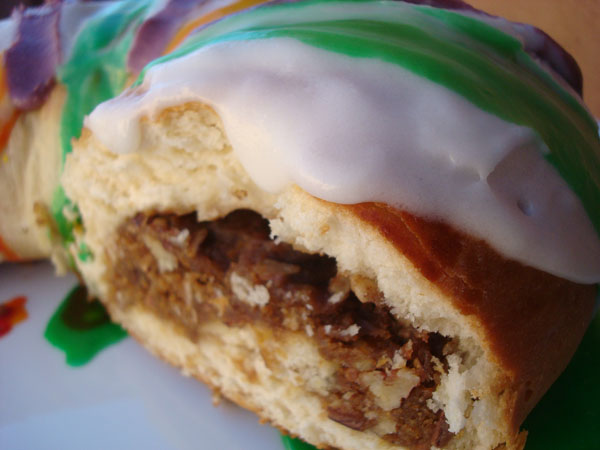 The following recipe yields a King Cake that makes for some deliciously rich eating. Slightly more bread-like than a cinnamon roll, but filled with a decidedly non-virtuous pecan-rich filling, it makes a wonderfully decadent breakfast, but tastes good all day long, and is suitable for any season. Long live the king, indeed.

Some King Cake recipes call for braiding the dough, but the generous filling in this recipe tends to work better if you roll the dough up, jelly roll-style. 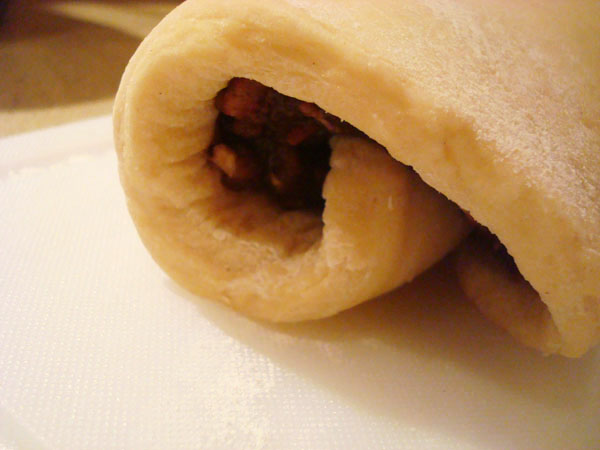 Activating the yeast: yYu’ll notice that the recipe calls for warm water (110 degrees F) to combine with the yeast. This warm temperature will activate it without killing the yeast, which can happen if the water is too hot.

A note from the author: I have had this recipe for so many years that I confess, I forget where I found the original recipe. I have adapted it throughout the years; the one major change I made was to double the filling. This cake has a very generous amount of filling, and it’s so good that you’ll certainly thank me for making this change.

Storing the cake:Cover any leftovers tightly with plastic wrap to keep the crust from getting stale or dry. Store, loosely covered, at room temperature, for up to three days. This is a fantastic breakfast item.

How to make king cake

Optional: one egg, beaten, for an egg wash

In a small saucepan, scald the milk: stir frequently over medium-high heat until it starts to steam and small bubbles begin to form. Remove from heat and add the butter, stirring until the butter melts. Allow the mixture to cool to room temperature.

To make the pastry, in a large bowl, dissolve the yeast in the warm water with the ½ tablespoon of sugar. Let stand until creamy and bubbling, about 10 minutes. 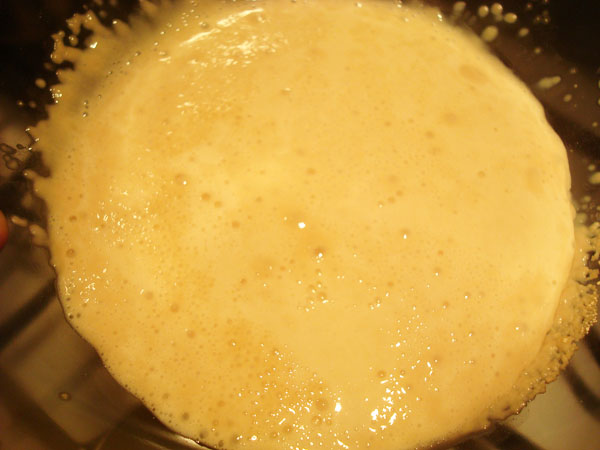 Add the cooled milk mixture, then whisk in the egg. Stir in the ¼ cup sugar, salt and nutmeg. 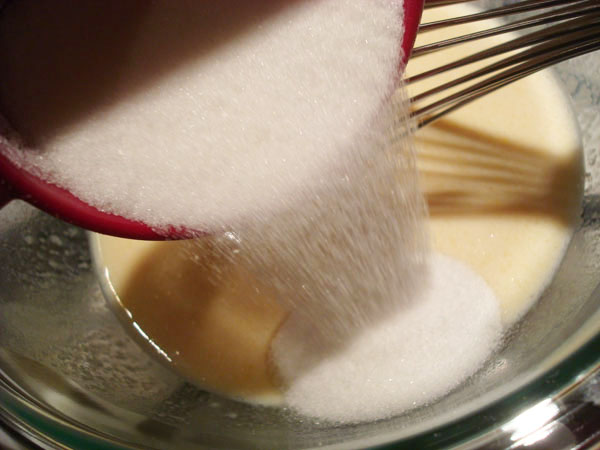 Using a wooden spoon, beat the flour into the wet mixture one cup at a time. When the dough has become cohesive, turn it out onto a lightly floured surface and knead it until smooth and elastic, 8 to 10 minutes. 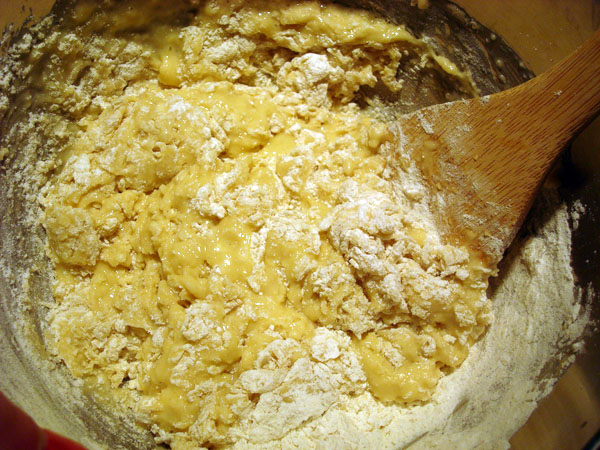 Lightly oil a large bowl with canola oil or cooking spray. Turn the dough in the bowl until it’s coated all over with oil. Cover with a damp cloth or plastic wrap and let rise in a warm place until doubled in size, about two hours.

Punch down the dough, and let rise again for 15 minutes. 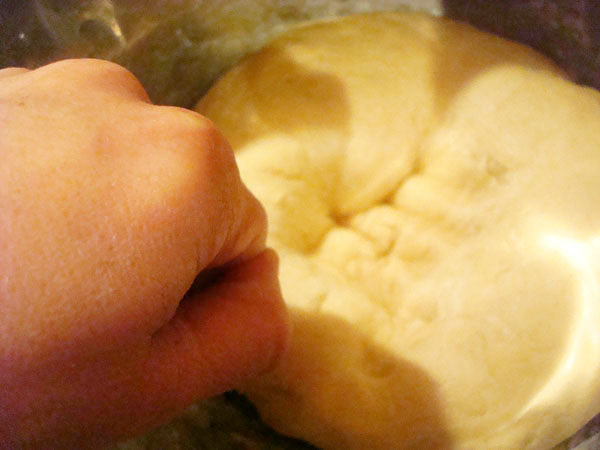 To make the filling, combine the brown sugar, cinnamon, pecans, flour, and salt in a medium bowl. Pour the melted butter over the cinnamon mixture and mix, using a wooden spoon or your hands, until crumbly. Set aside for a moment. 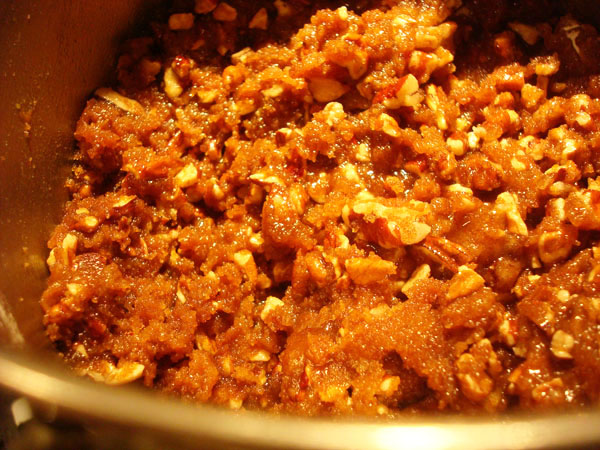 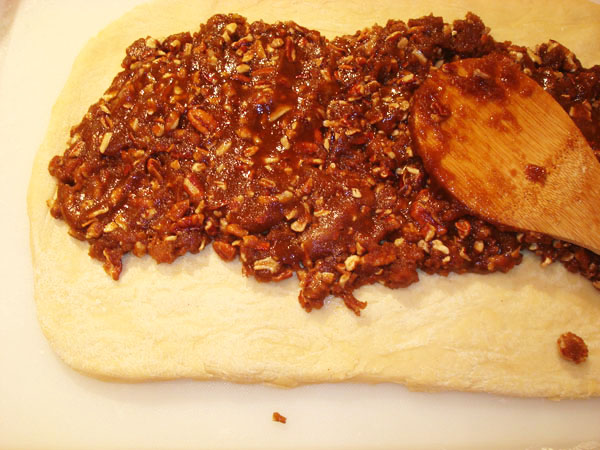 Starting on the longest side, roll up each half tightly, as you would with a jelly roll. 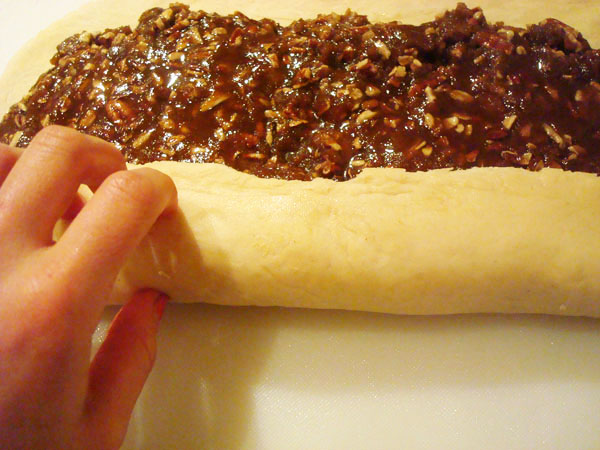 Bring the ends of each roll together, tucking one end inside of the other to ensure a seal, forming a large oval. 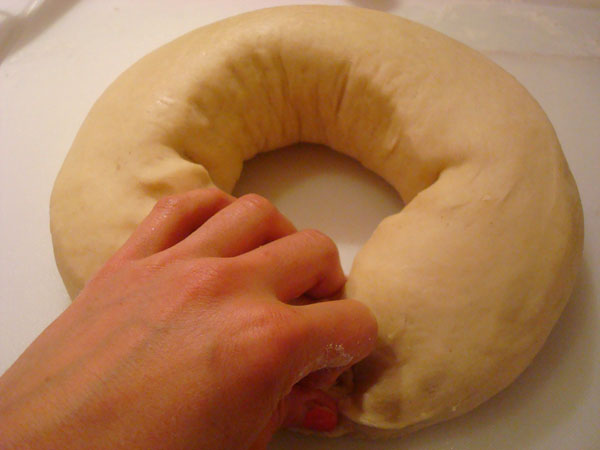 Place the ring on a greased or parchment-lined cookie sheet with the seam facing down. Since the pastry will rise one more time, make sure that the hole in the center isn’t too narrow: gently stretch the ring to be a bit wider and larger to accommodate this spreading, if it seems necessary.

Using scissors, cut into the outside of the dough ring, one third of the way through, at approximately 1-inch intervals. Let rise in a warm spot until it has increased in size again, about 45 minutes. If desired, you can apply an egg wash at this point. This will make your cake slightly glossy once baked. 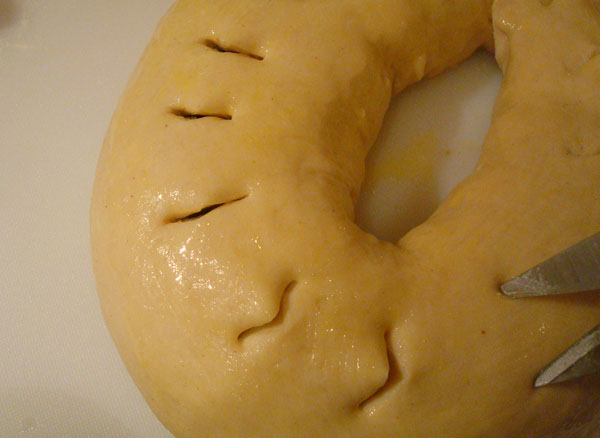 Near the end of this rising period, center a rack in the oven; preheat the oven to 375 degrees F.

Bake the ring for 25 to 30 minutes, rotating the pan 180 degrees midway through baking, until the bottom is lightly browned and the top of the ring is golden-colored. If desired, push the naked baby into the bottom of the cake, or by inserting it through one of the cutouts you made with the scissors. 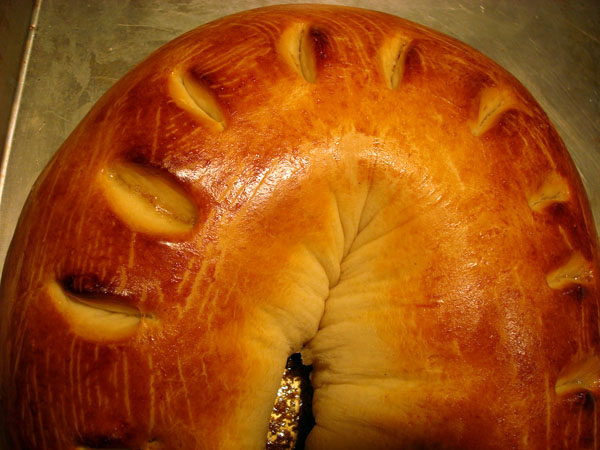 When the cake comes out of the oven, mix the glaze by stirring the confectioners’ sugar with the cream until it is thick but easily spooned on top of the cake. You can add more or less cream depending on your desired consistency.

Drizzle the glaze on the cake as-is, or divide into parts and tint them yellow, green, and gold to accent the topping. Add any sprinkles, luster dust or additional decorations of your choosing. 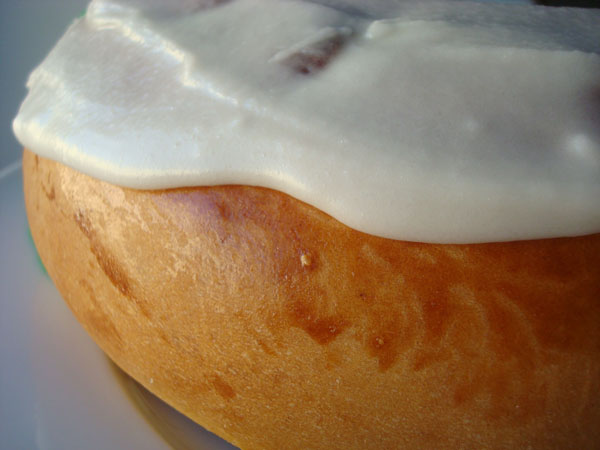 Slice into wedges using a serrated knife to serve. This cake can be served warm or at room temperature.

How do you like to decorate your King Cakes?