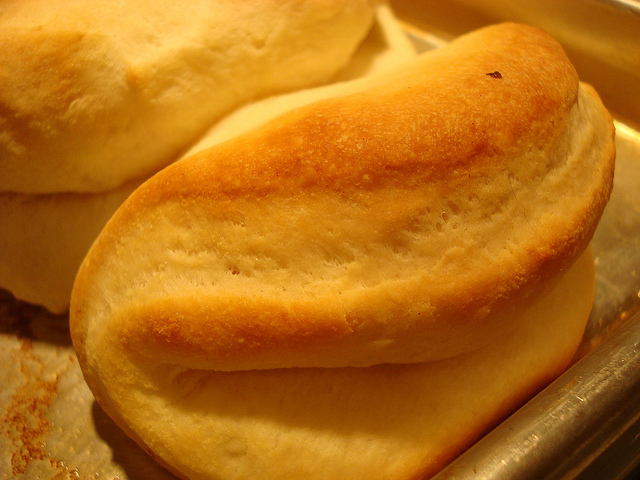 When it comes to baking yeast breads, Parker House rolls are a must-make. These rolls are buttery like a croissant, with the feather-lightness of challah.

Named for the Parker House Hotel in Boston, which is also the birth place of Boston cream pie, they’ve become a mainstay at fine dining establishments — and on your dinner table.

1. In the bowl of a stand mixer fitted with the dough hook, combine two cups of the flour with the sugar and yeast.

2. Melt ½ cup (1 stick) of the butter with the salt. Combine the melted butter mixture with the flour, sugar and yeast in the bowl.

3. With your mixer on low speed, gradually pour 2 cups hot tap water (120-130 degrees) into the dry ingredients. Add egg. Increase the mixer speed to medium, and beat for two minutes, or until fully combined.

4. Reduce the speed to low and beat in 2 more cups of flour. It will form a thick batter. Scrape the sides of the bowl. Stir in the rest of the dough. You may find that it’s easier to incorporate the remaining dough using a wooden spoon, as it will be getting rather thick. You’ll have a very soft dough that will come out of the bowl in one mass if you try to lift it.

5. Turn the dough out onto a lightly floured board. Knead until smooth and elastic, about 10 minutes. Shape the dough into a ball, and place in a large, oiled bowl. Lightly oil the top of the dough. Cover with a kitchen towel, and let the dough rise in a warm place until the volume doubles, about 90 minutes to 2 hours.

Pro Tip: Although the rolls are best when baked directly after preparing the dough, it is possible to freeze some or all of the dough for later use. Wrap it tightly in plastic and freeze it for up to a week. Let the dough thaw to room temperature before rolling it out.

6. Remove the towel and punch the dough in the center. The dough will sort of stay where you punch it, so push the outer edges into the void. Form it into a smooth, seamless ball. Return to the bowl for 15 more minutes.

7. Toward the end of your rising period, heat the oven to 400 degrees F.

8. Melt the remaining butter in a saucepan. Once melted, remove from heat. Place a large pan or baking sheet next to the saucepan. Leave to the side for the moment.

9. On a lightly floured surface with a floured rolling pin, roll the dough out to about ½” thick.

10. Using a 2″ to 3″ round cookie or biscuit cutter, cut the dough into circles, taking care not to twist the cutter as you remove (this will keep the rolls from getting a perfect rise).

11. Holding the dough by the edge, dip each side in the melted butter. Transfer to the nearby roasting pan, folding it in half so it looks kind of like a taco shell. Repeat, and arrange the folded circles in rows. They can be near one another, or they can be lightly touching.

Cover the pan with a towel; let dough rise in a warm place until it has doubled in volume, about 45 minutes.

12. Bake 15 to 18 minutes, until browned. If desired, brush the rolls with butter immediately after removing them from the oven. Serve warm with butter or jam.