Hot weather. It’s great for swimming, sunning, and frolicking outdoors. It’s high season for outdoor weddings and events. But for the cake decorator, sunny and hot weather can be a season fraught with anxiety over possible decorating disasters: melting buttercream! Drooping fondant flowers! Bleeding colors! These can really bring down the design of a cake. While you can’t control the weather, there are some pieces of advice and precautions that can be taken into account when planning your cake decoration for hot and humid days.

The danger zone: fragile ingredients ahead.

Even in the best of conditions, some decorations and fillings are more susceptible to the heat than others. For this reason, many cake decorators will avoid certain ingredients in the hottest summer months. For instance, they may be more apt to use fruit or buttercream fillings as opposed to custard or bavarian cream, which doesn’t fare well in heat and could make a cake soggy, or worse, spoil. The same goes for certain types of frosting, especially those that would typically require refrigeration, such as cream cheese, or whipped cream frostings. Types of ganache can also be fragile in the heat, too (just think about how chocolate candies melt in the sun!).

In general, most decorators will favor fondant or buttercream for decorating cakes during these hot and humid summer months. 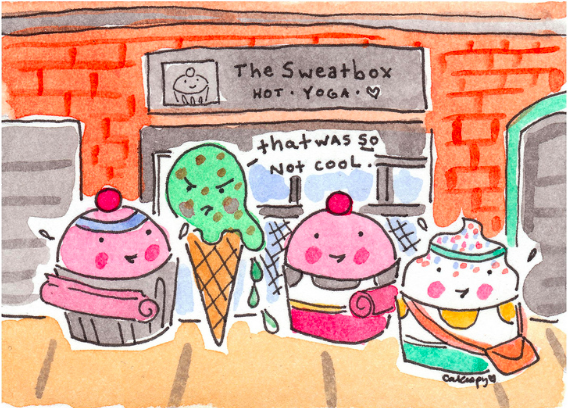 In the case of buttercream,

it’s advisable to adjust the recipe to stabilize the icing. This can be done in a few different ways. Some will substitute part of the butter with shortening, which doesn’t melt as rapidly and holds its shape a bit better.

Another trick is to add some type of starch to the icing before using it to decorate the cake. Adding cornstarch (about 2 tablespoons per 3 cups of icing) to the mix will make icing a bit sturdier, which will help it fare better in the heat.

There are other agents which stabilize, too. Powdered milk or melted marshmallows added to frosting and mixed thoroughly will add stability, as well as add some flavor to the icing. Yet another option is to add some meringue powder, gelatin, or instant pudding powder to your buttercream, which will also help stabilize it owing to gelatin and starch.

As a side note, it should be noted that many of these tricks will work to help stabilize whipped cream, too–but even so, proceed with extreme caution on hot days. Even when stabilized, whipped cream is very heat sensitive and would still require refrigeration until directly before serving.

In terms of holding up to the heat, fondant,

which is lower in fat and stabilized by the gelatin which is often an ingredient, tends to hold up the best. But even so, the hot sun can make delicate shapes droop and food coloring bleed, so try to keep the cake in as cool and dry a place as possible. In terms of decoration, use common sense: for instance, this might not be the day to test out a very delicate flower design with spider-thin fondant tendrils. More solid, sturdy decorating elements might be a better choice.

Even with some of these tips under your sleeve, keep in mind that even the most beautifully planned and carefully stabilized decorations are still susceptible to to the heat. So when possible, keep cakes chilled until as soon as possible before serving, keep them out of direct sunlight, and store leftovers in the refrigerator or indoors soon after cutting, as the exposed fillings will melt quickly in the heat, too!