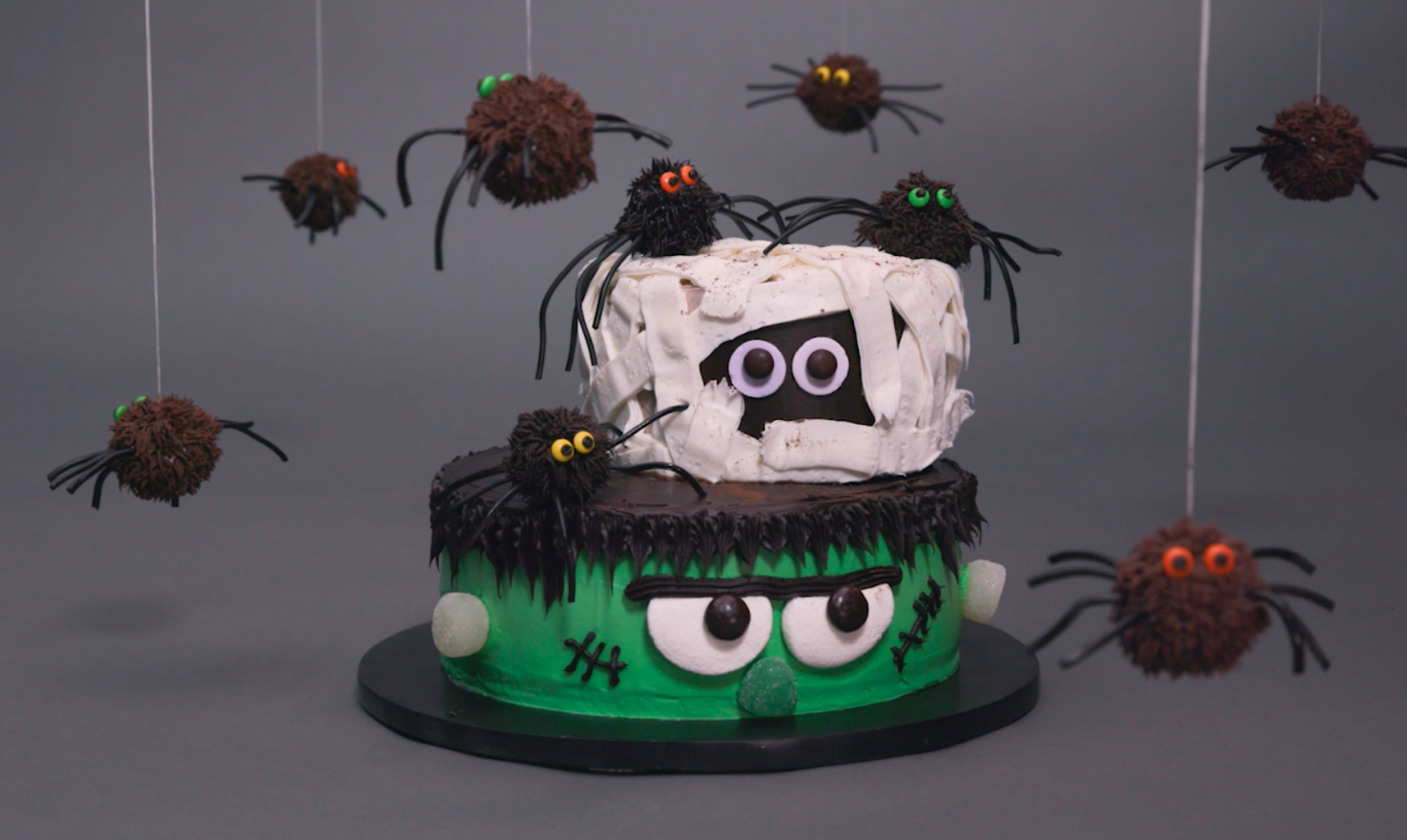 If you’re feeling the spooky season as much as we are, roll up your sleeves, grab your piping bags and get decorating! This monster cake is perfect for any Halloween party, and it’s easy for first-time tier-making, too. 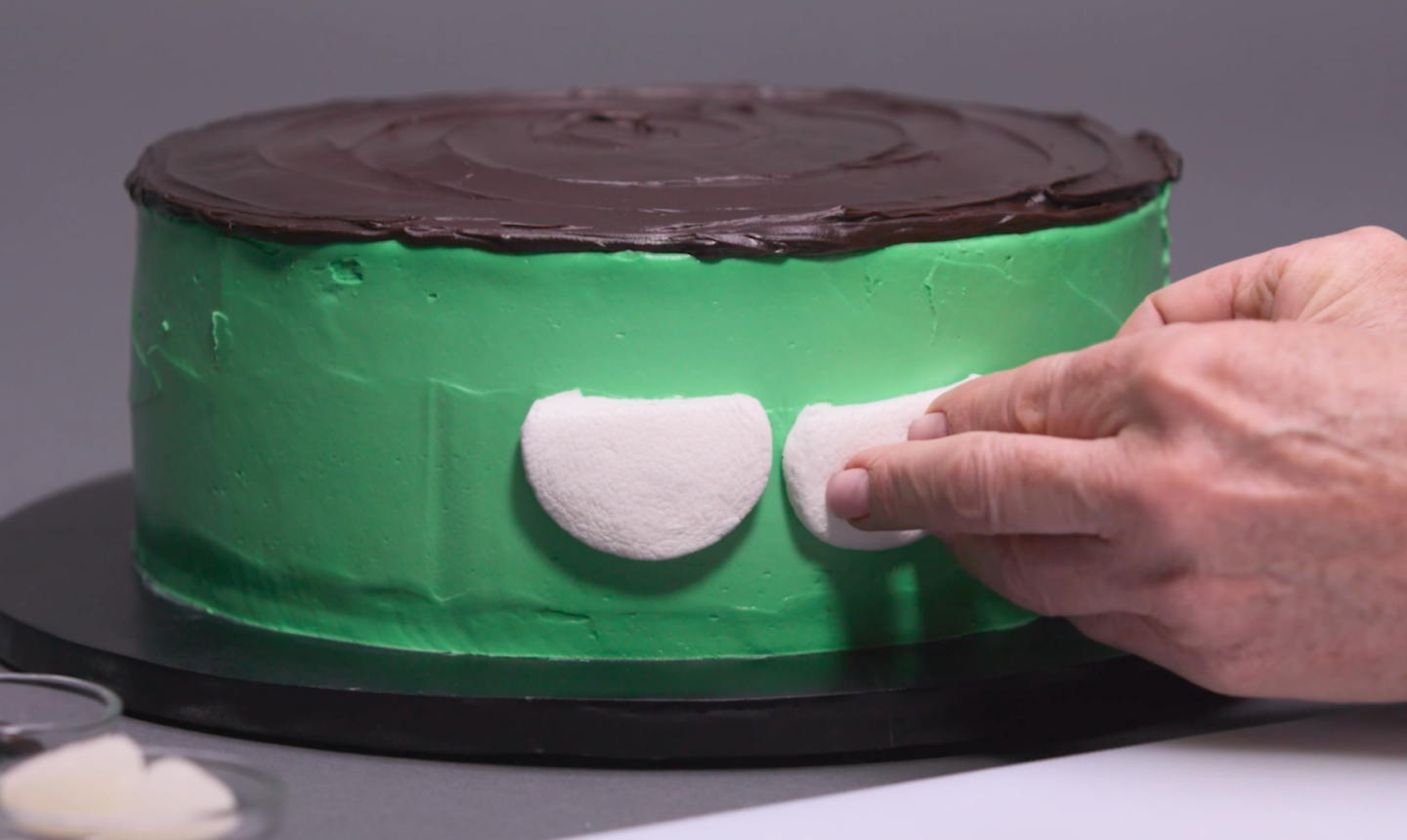 Frost your larger cake like Frankenstein — green around the sides, black on top for hair. Once you’ve built the base layer, it’s time to start the fun part: detailing.

Take a large marshmallow and snip off the ends so you have two skinny marshmallow circles. Then cut each circle to remove about ¼ of the circle. This will make the shape of eyes with lazy, partially closed lids where the monster’s thick brow will rest. Stick the marshmallow eyes to the side of the cake. 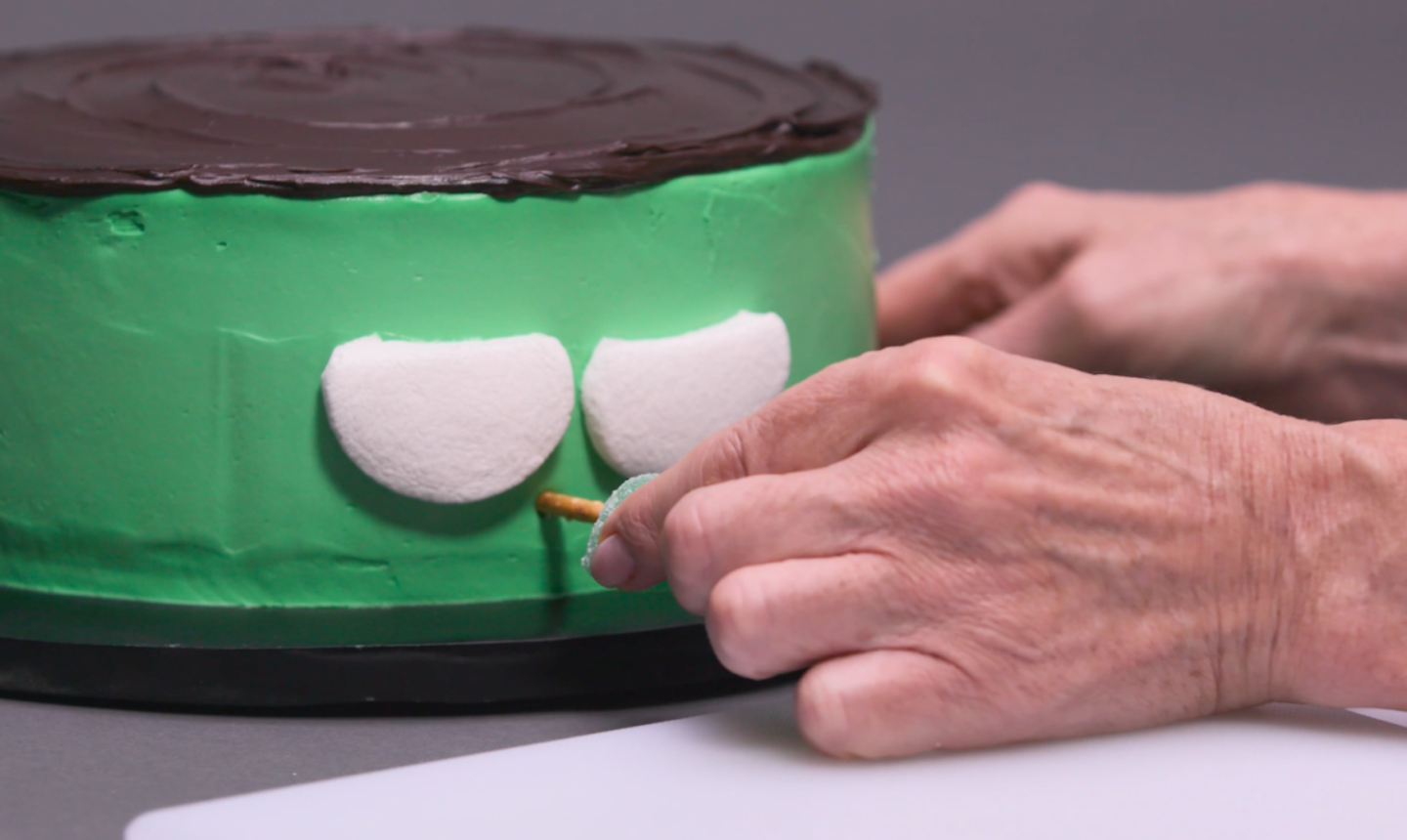 Cut a green spice drop in half and pierce the sliced end with a pretzel stick. When you have it securely in place, fasten the spice drop right below and between the eyes by sticking the pretzel as deep into the cake as it can go. Your monster now has a nose! 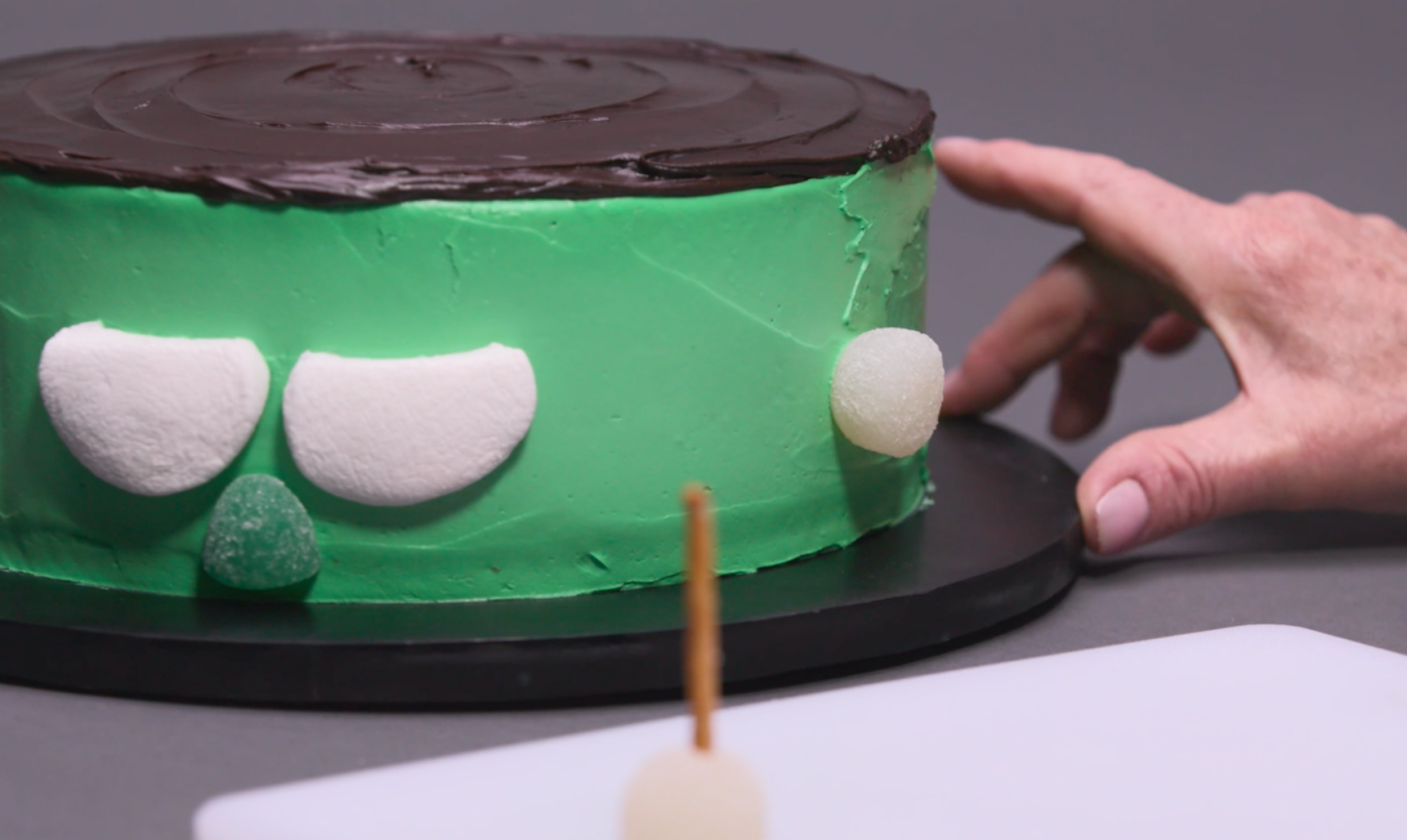 Next grab two white drops and stick pretzel sticks in through their rounded tops. Fasten these to the cake just as you did before, on either side of the face, to create Frankie’s neck bolts.

3. Pipe in the Details 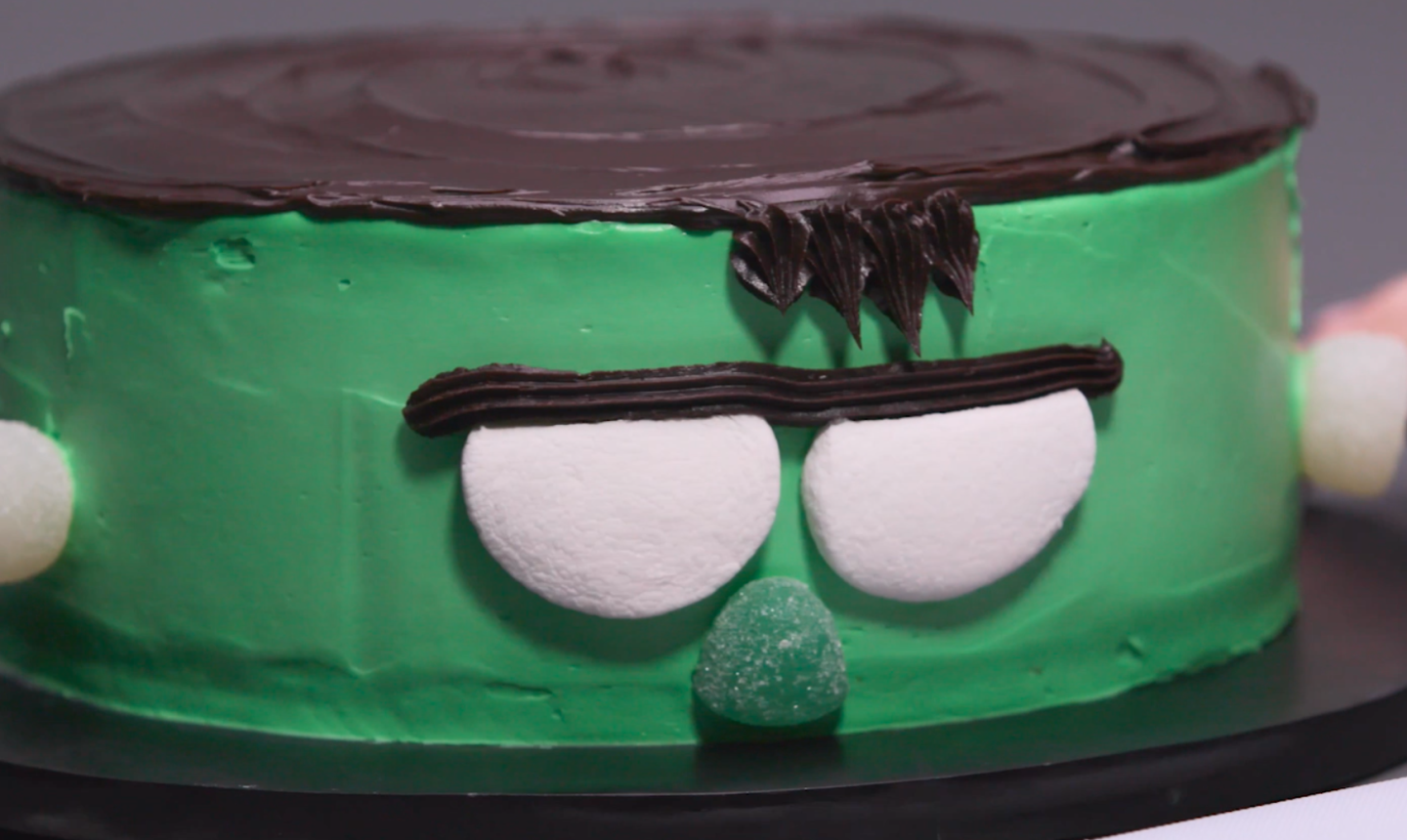 Fill a piping bag with black frosting and fit with an open star tip. Across the flat top of your eyes, pipe a thick, continuous brow. Using the same tip, pipe short strands of hair down from the cake’s black top to give your monster a fringe. You can pipe hair along the cake’s diameter, or just keep it to the front. 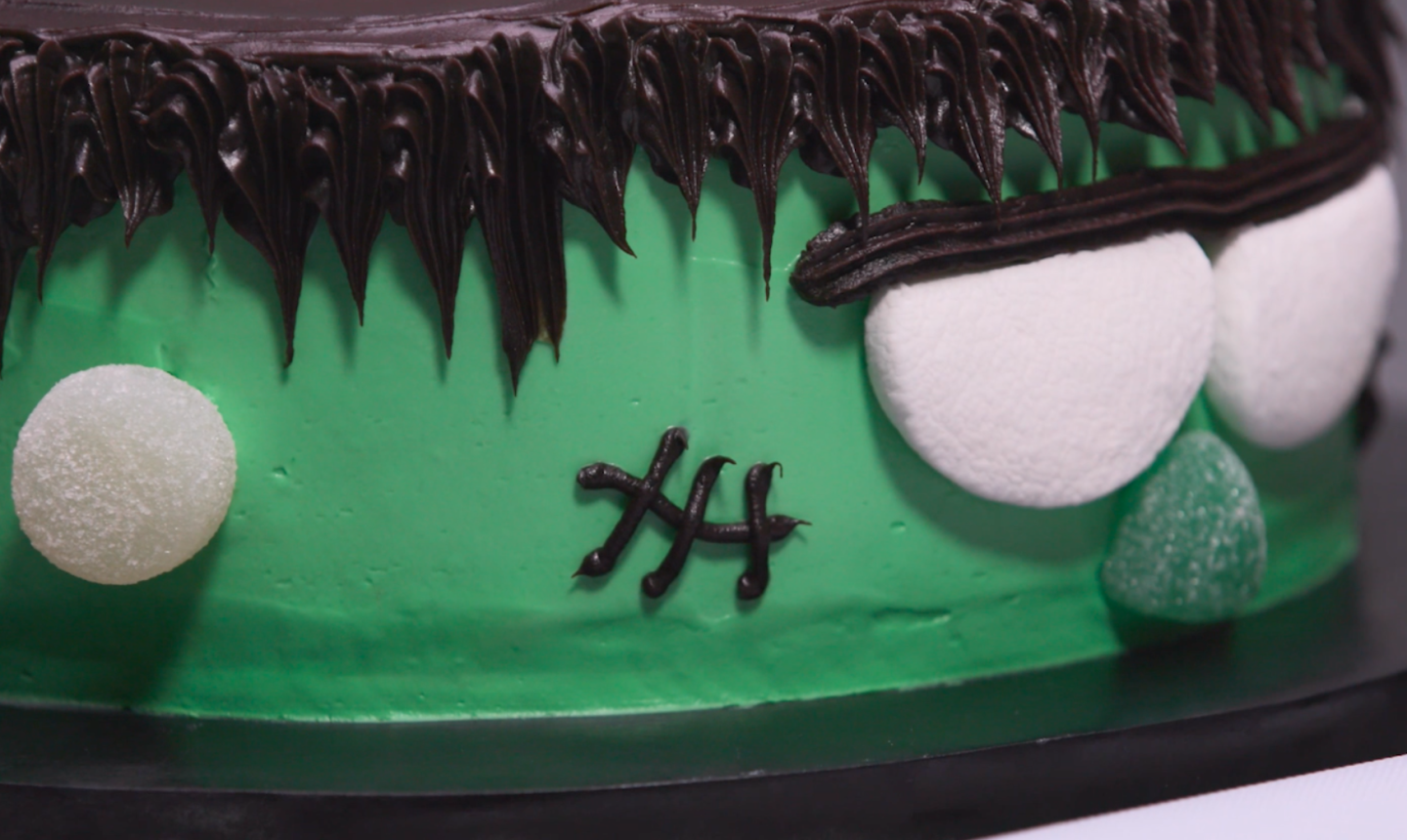 Replace your piping tip with a small circle opening and pipe a few spots of stitches along the cake.

4. Finish Up the Eyes 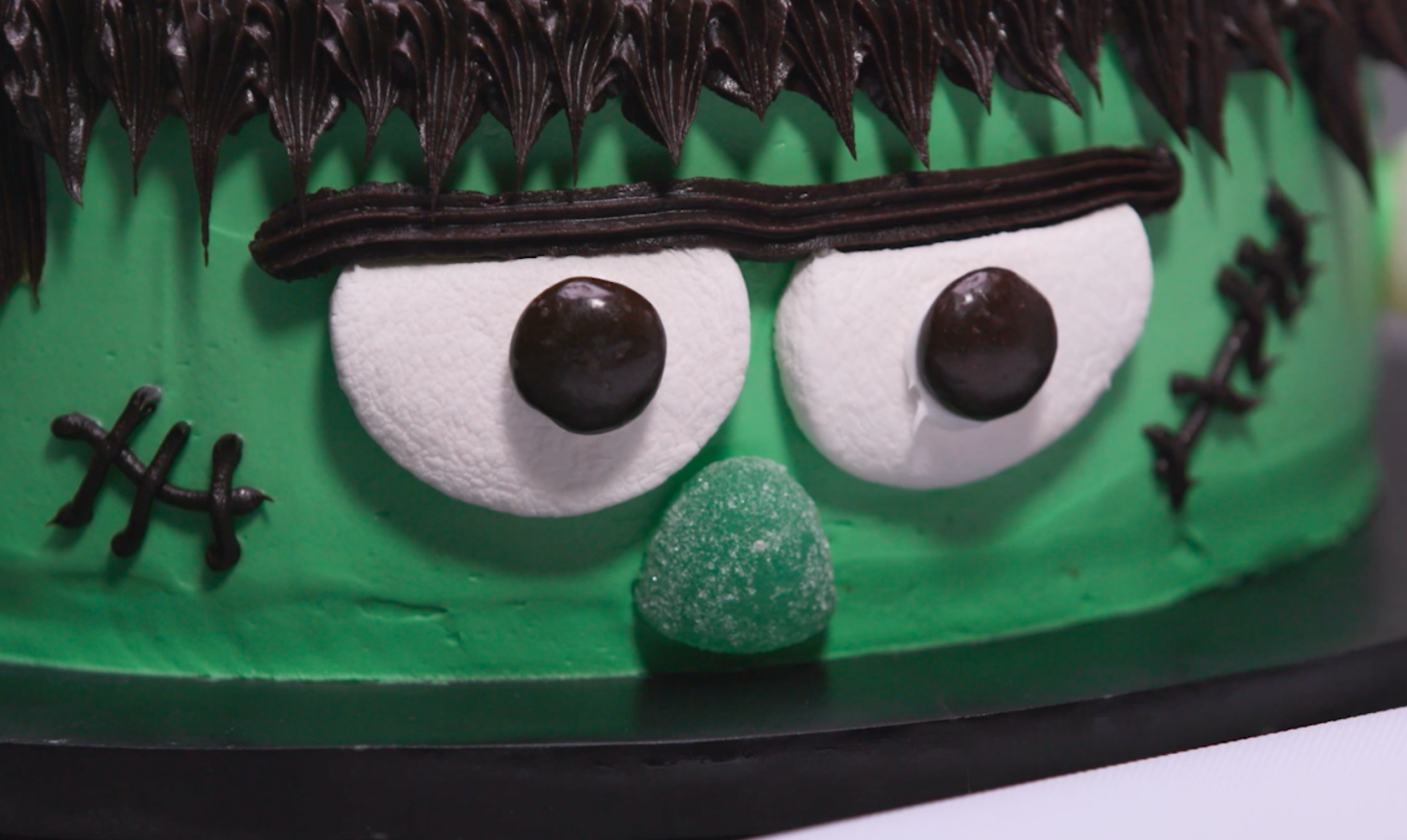 Finish up the eyes by adding pupils: pipe a small amount of frosting onto the center of your marshmallow eyes. You could also use chocolate candies (maybe Peanut M&M’s or chocolate wafers?) or even some black fondant — whatever you prefer! 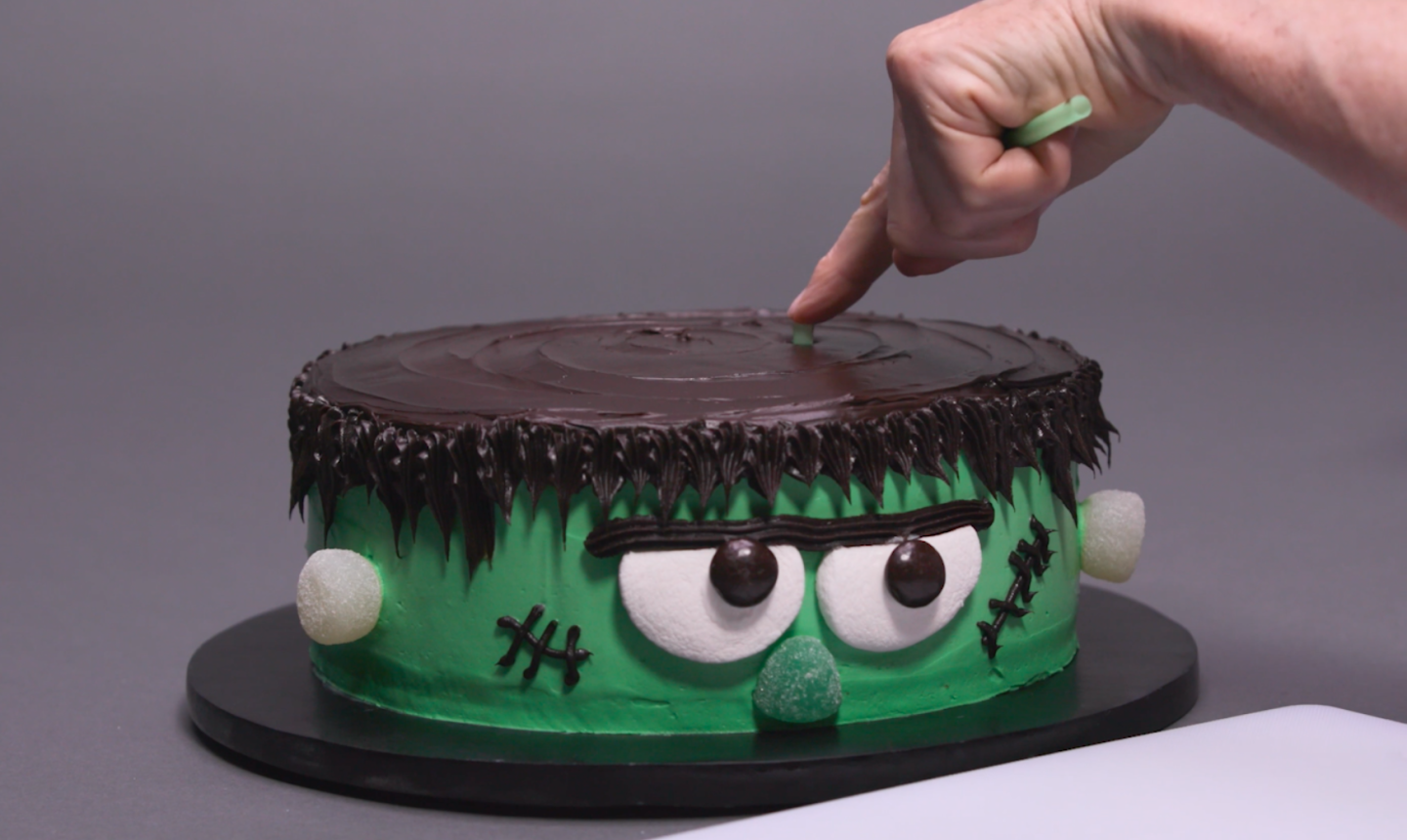 Now, determine where the second tier of your cake will rest. Remember that this should be kind of off-kilter, not neatly centered. Once you’ve got your spot picked out, stick a plastic straw deep into the top of your Frankenstein and snip off the excess so nothing is sticking out up top. The straw is just there to provide support. 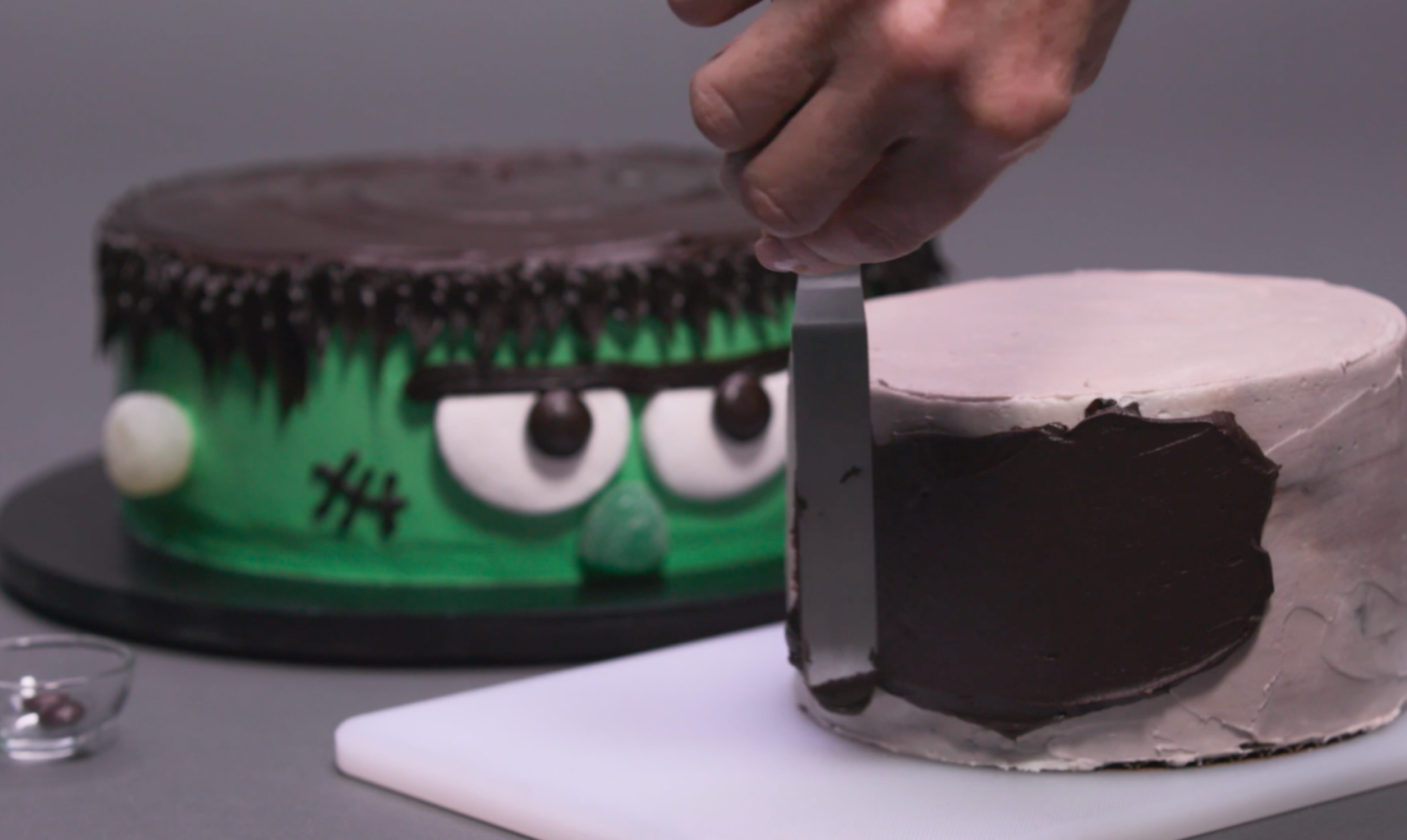 On the smaller cake, apply a layer of white frosting. This doesn’t have to be perfect — most of it will be covered by wraps, anyway. Next apply a smooth, thick layer of black frosting on one side. This is going to be your mummy’s face, peeking out through the edible linens. 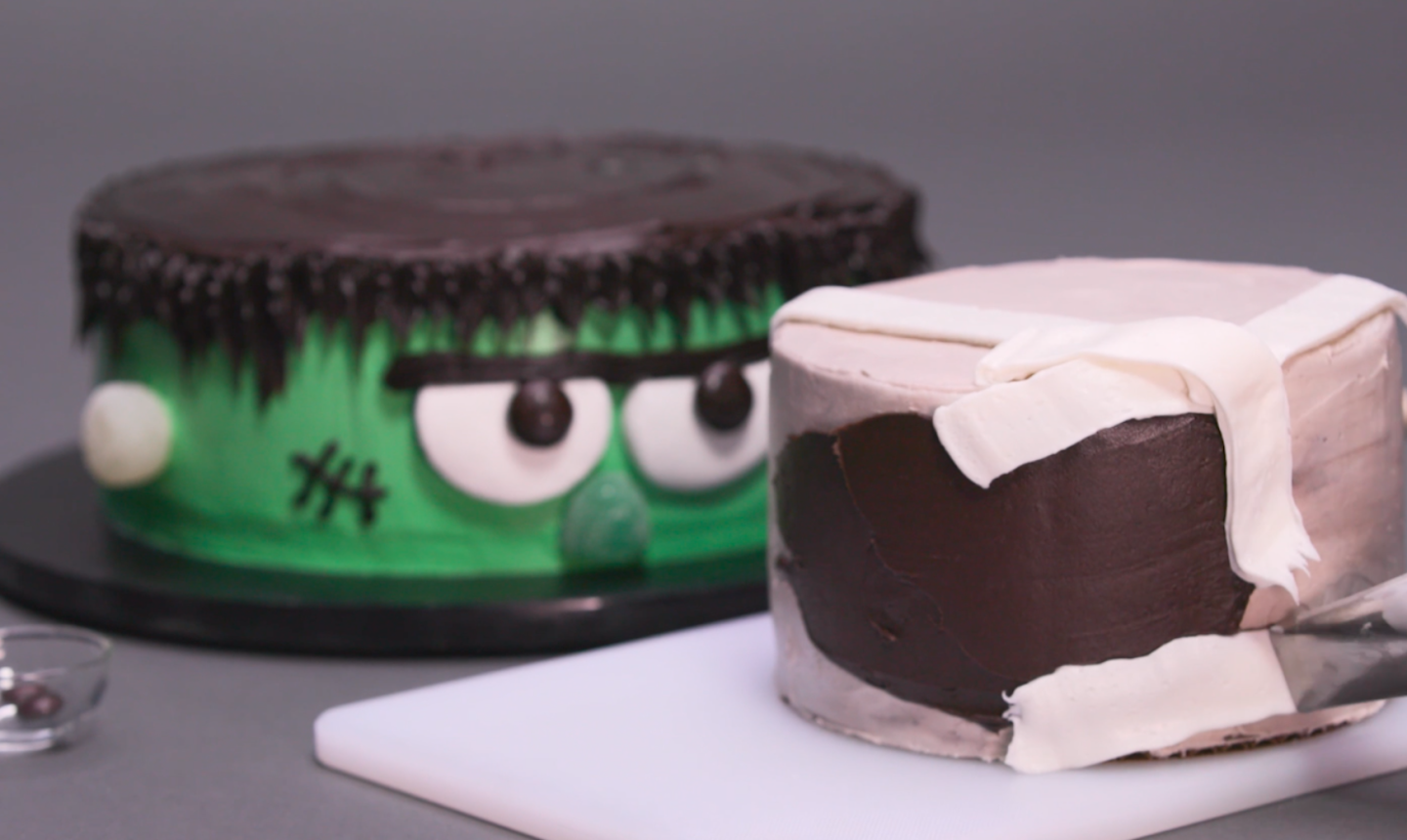 Fill a piping bag with white frosting and, using a flat piping tip, apply lengths of wrapping around the mummy cake. The whole thing should be pretty well covered, aside from a gap for the face. When you’re finished, carefully place the mummy on top of the Frankenstein. 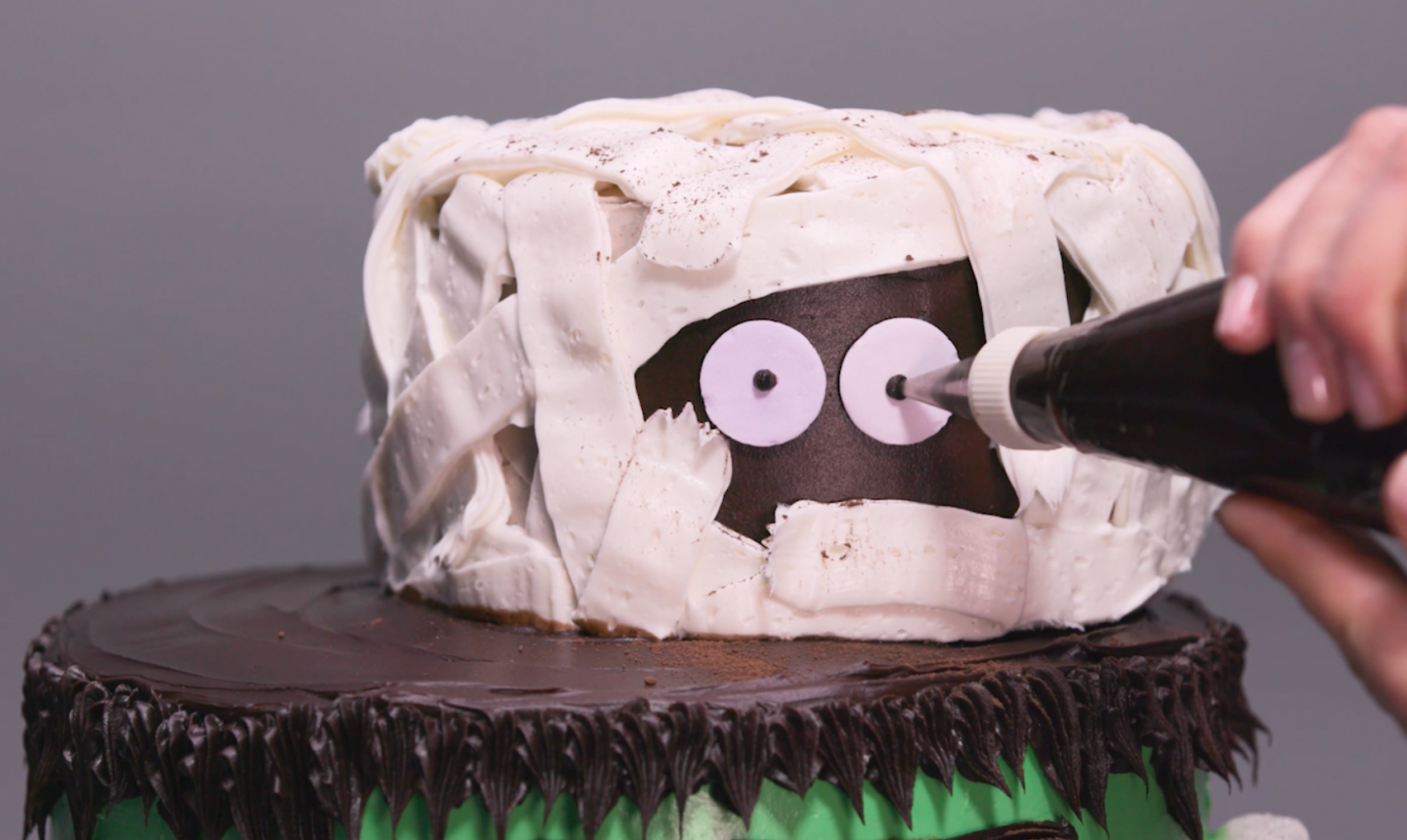 Sprinkle cocoa powder around the top and sides of your mummy — after all, if it’s spent 5,000 years in an Egyptian tomb, it’s going to be a bit dirty and sandy.

Once your mummy is dingy enough for your satisfaction, fasten on some eyes. You can use parts cut from your marshmallow again, or use flat circles made from fondant or modeling chocolate. Then use frosting to create pupils just as you did with Frankenstein. Congratulations, you’re done with your second monster! 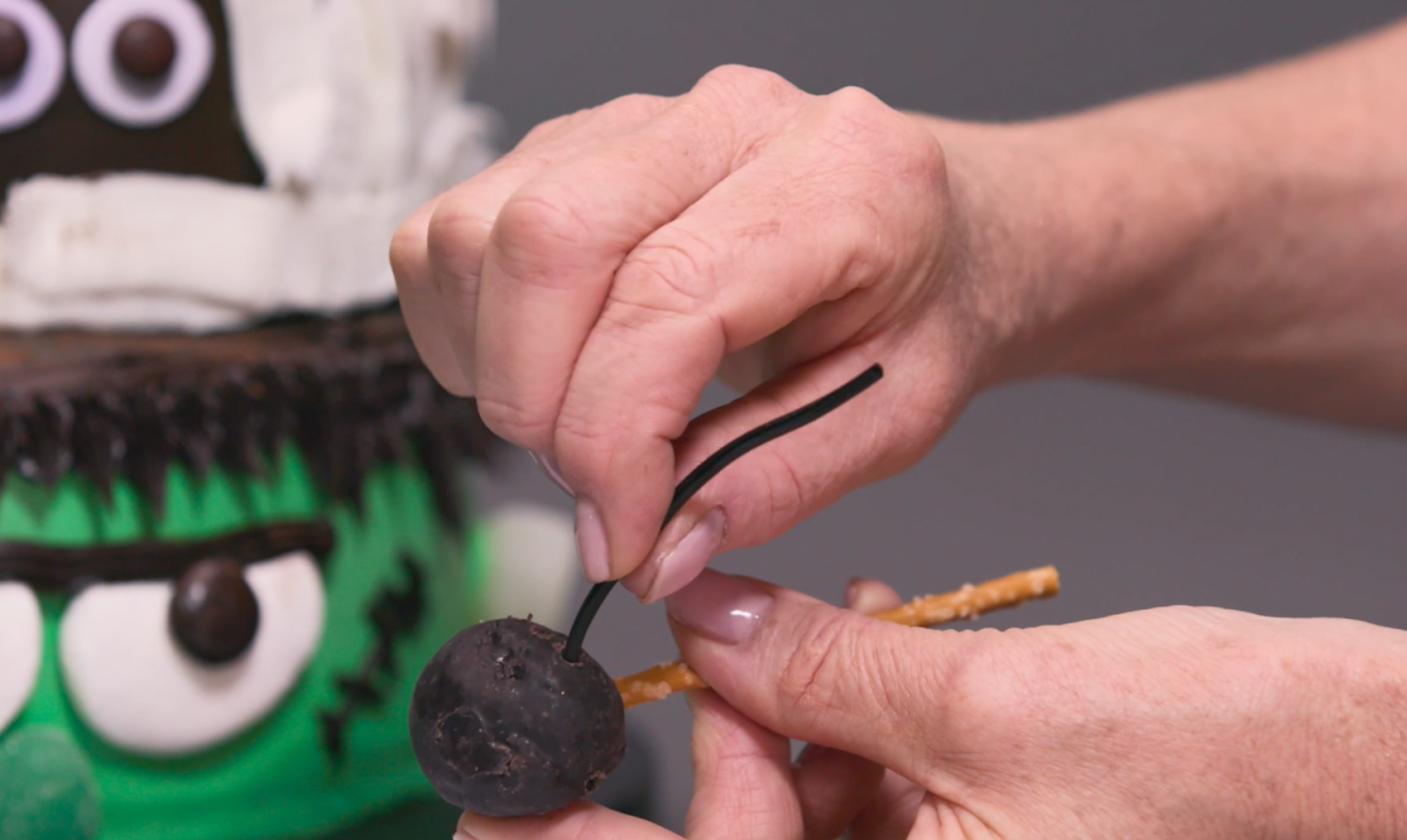 Pierce a donut hole with a pretzel stick. Next, use a toothpick to poke eight holes for the spider legs, and stick one strand of black licorice into each hole. 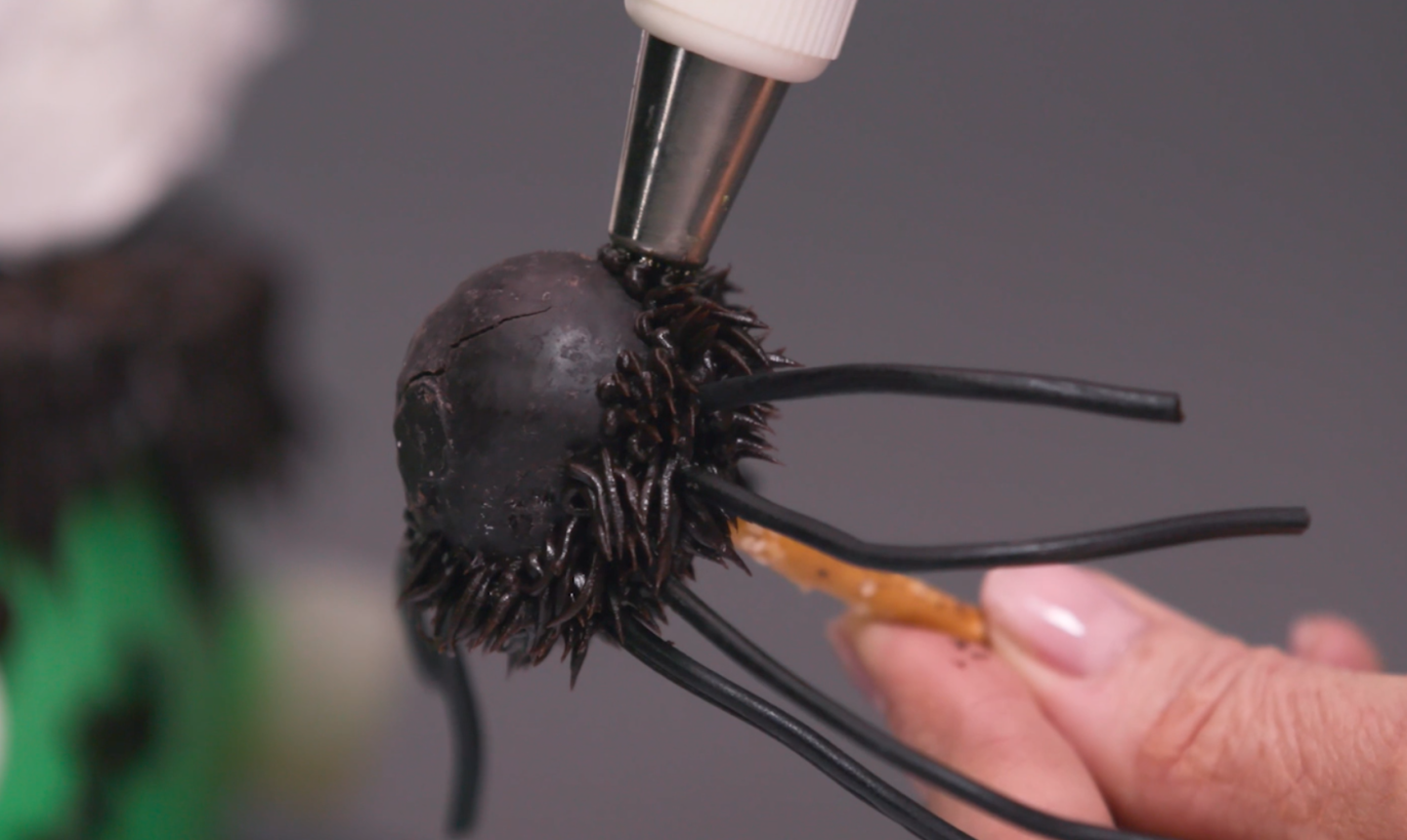 With your licorice in place, fill a piping bag with black frosting and use a multi-opening tip to give your spider a furry little body. Pipe all around the bottom half of the donut hole, leaving the top bare, and stick it into the mummy cake. 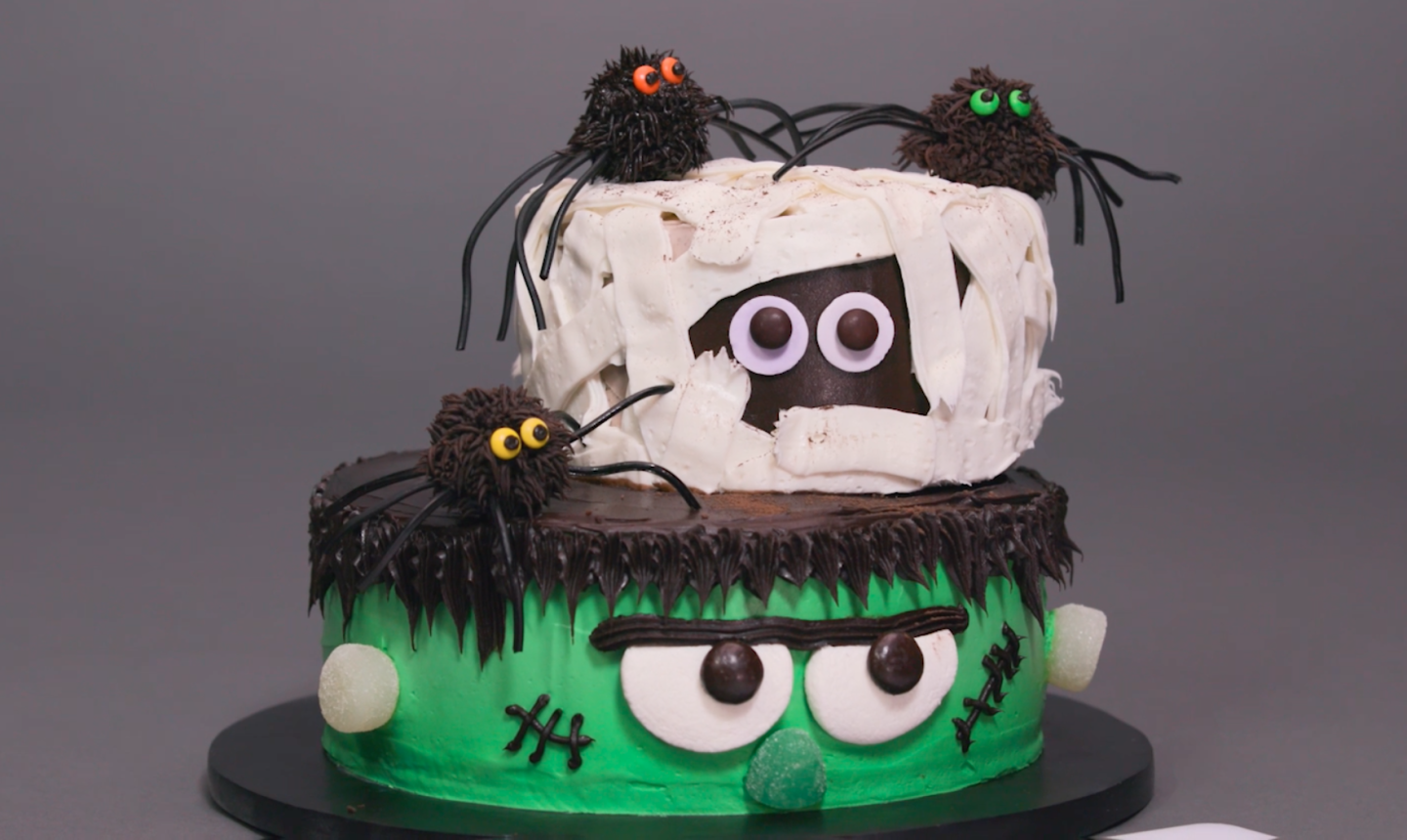 Once your spider is pressed into the cake, finish piping the top, stick on some bright M&M eyeballs and pipe the pupils. Repeat this process and make as many creepy crawlers as you want.

Now go ahead and eat it… if you dare!