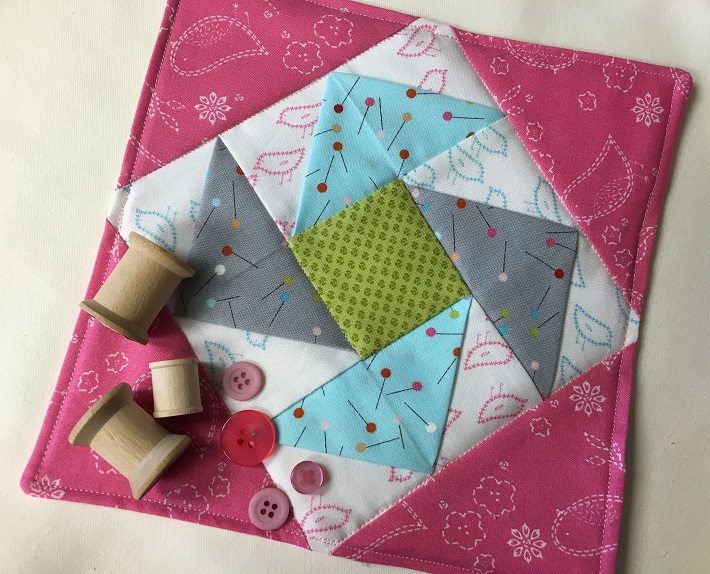 Whether there’s a drawer in your kitchen dedicated to mug rugs or you’ve never made a single one, this folded flying geese design is a must-have. Not only is it beginner-friendly, but it’s a great project for practicing a ton of techniques: making folded flying geese, sewing partial seams and using a pillowcase binding. Oh, and guess what? It can be made completely with charm squares!

1. Fold and Layer the Flying Geese 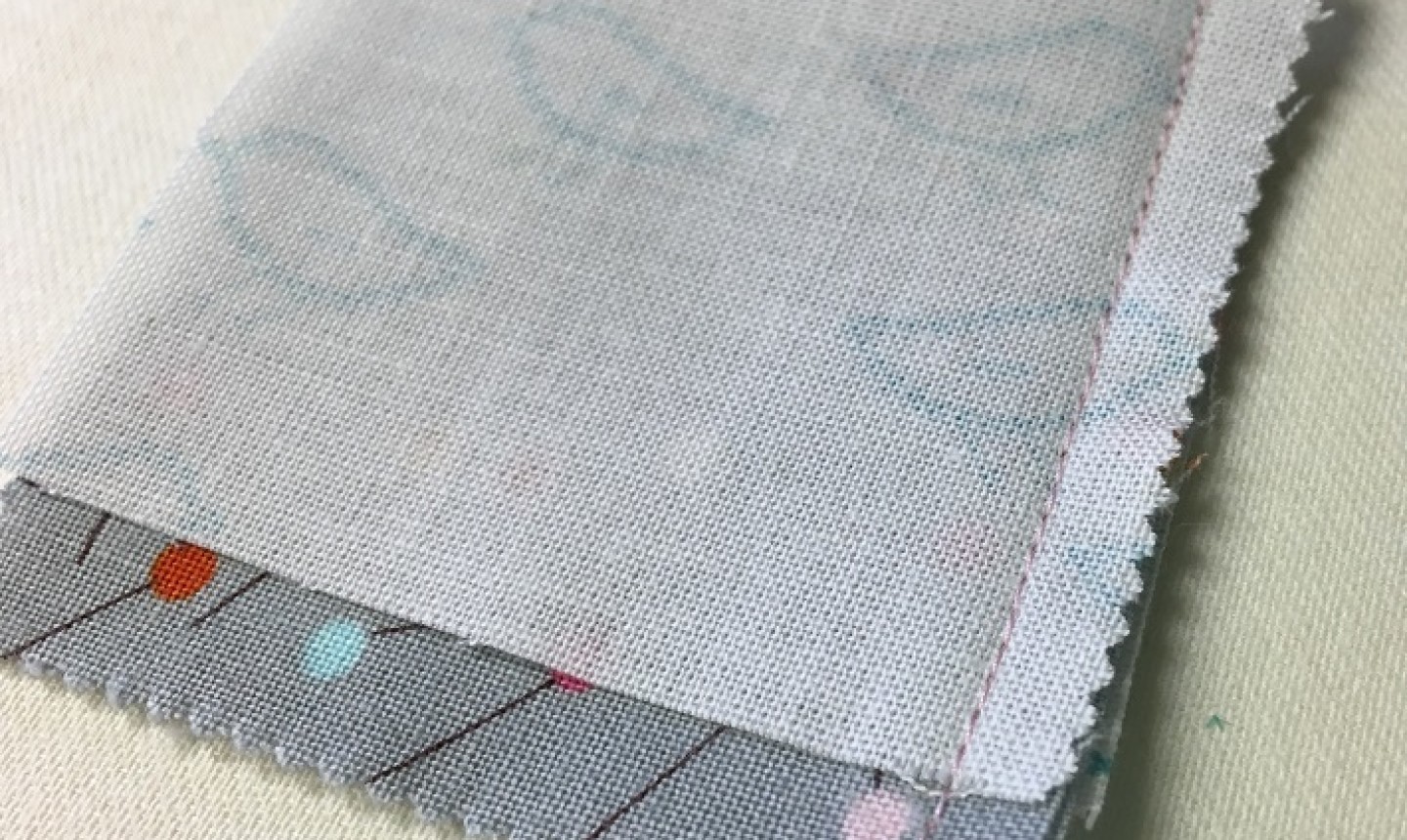 Fold the 2½” x 5″ strips in half, wrong sides together, and press the seam across the middle. They should now be 2½” squares, folded.

When you layer, make sure the background units are offset ¼” from the folded unit — this will create a ¼” seam allowance. 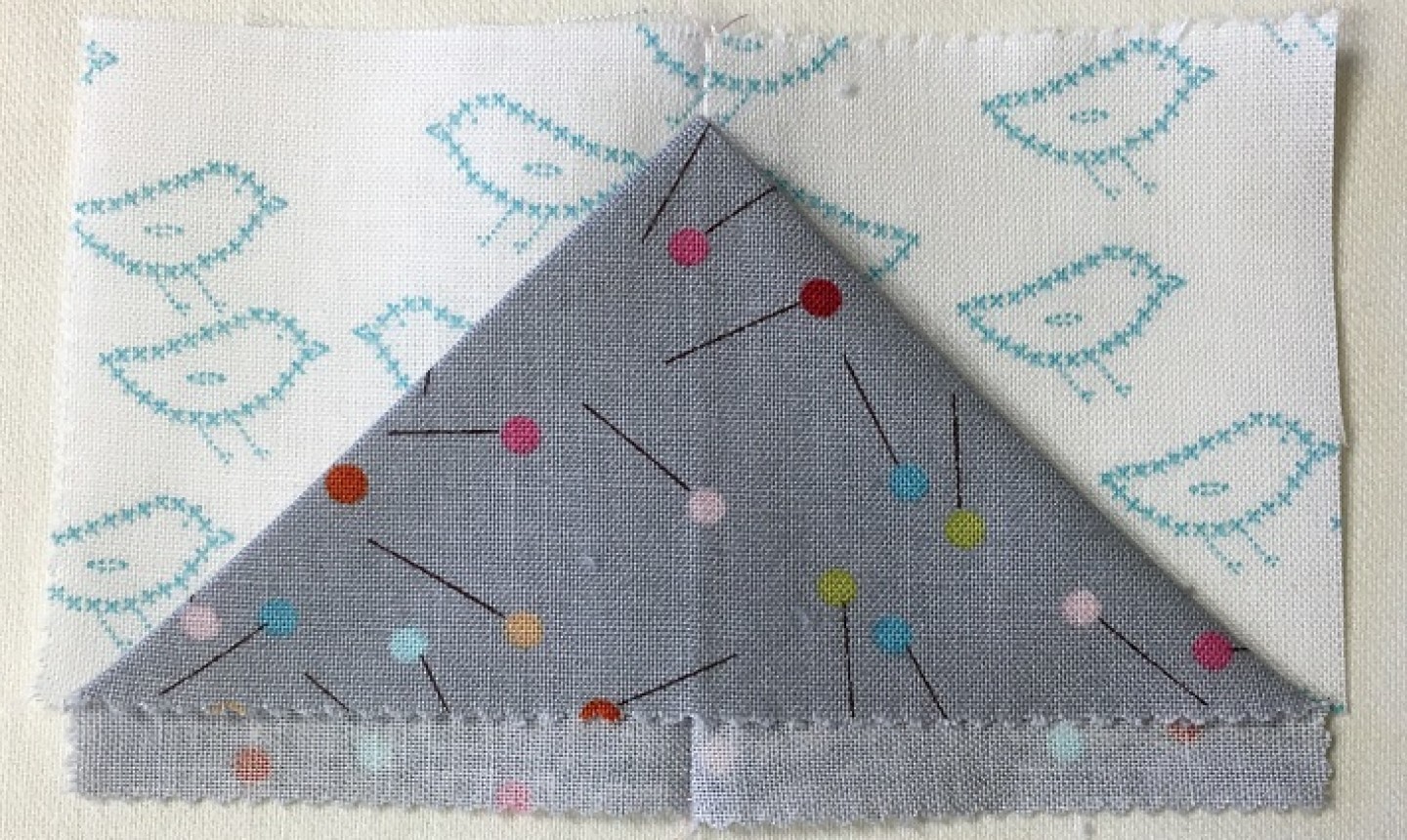 Sew along the raw edges. Unfold and press the seam open. You should have a ¼” seam allowance at the top and excess fabric at the bottom (this will be trimmed off later).

Sew four of these units and press them all in the same manner. You may need to insert the tip of the iron into the folded unit to get the fabric to lay flat. 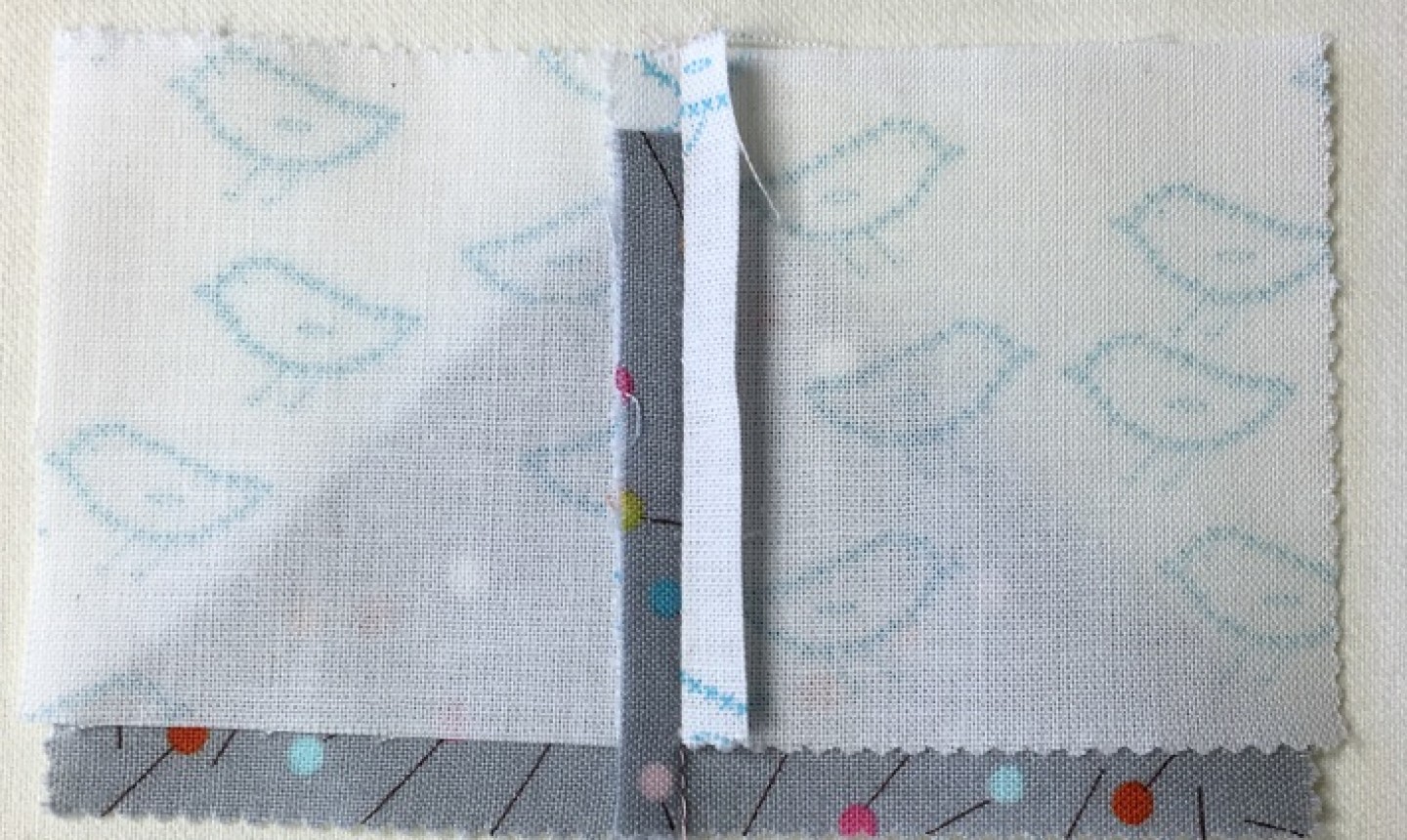 Press the seams open on the back of the folded flying geese units as well. 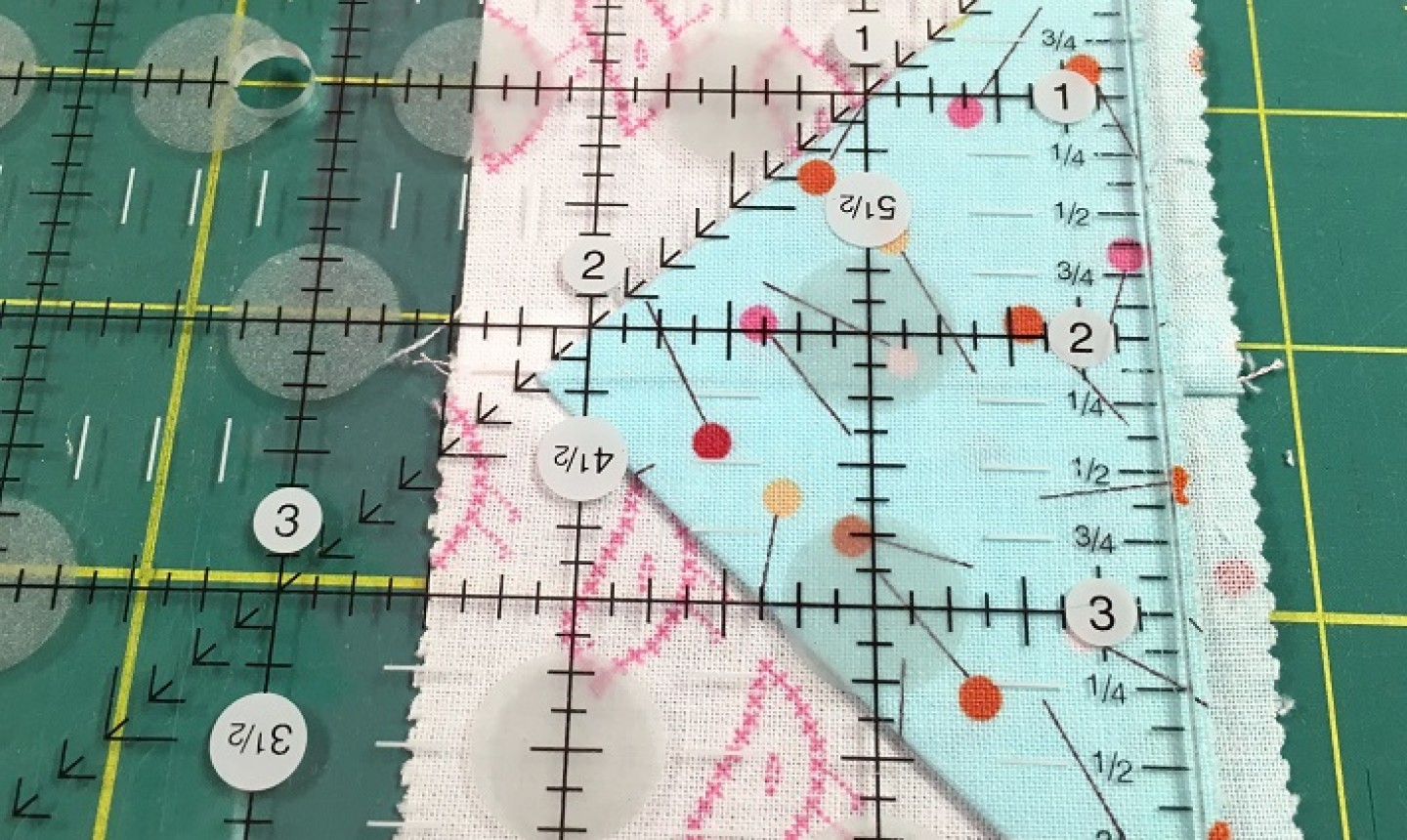 When all four units are sewn and pressed, trim the edges along the bottom so each unit is 2½” x 4½”. 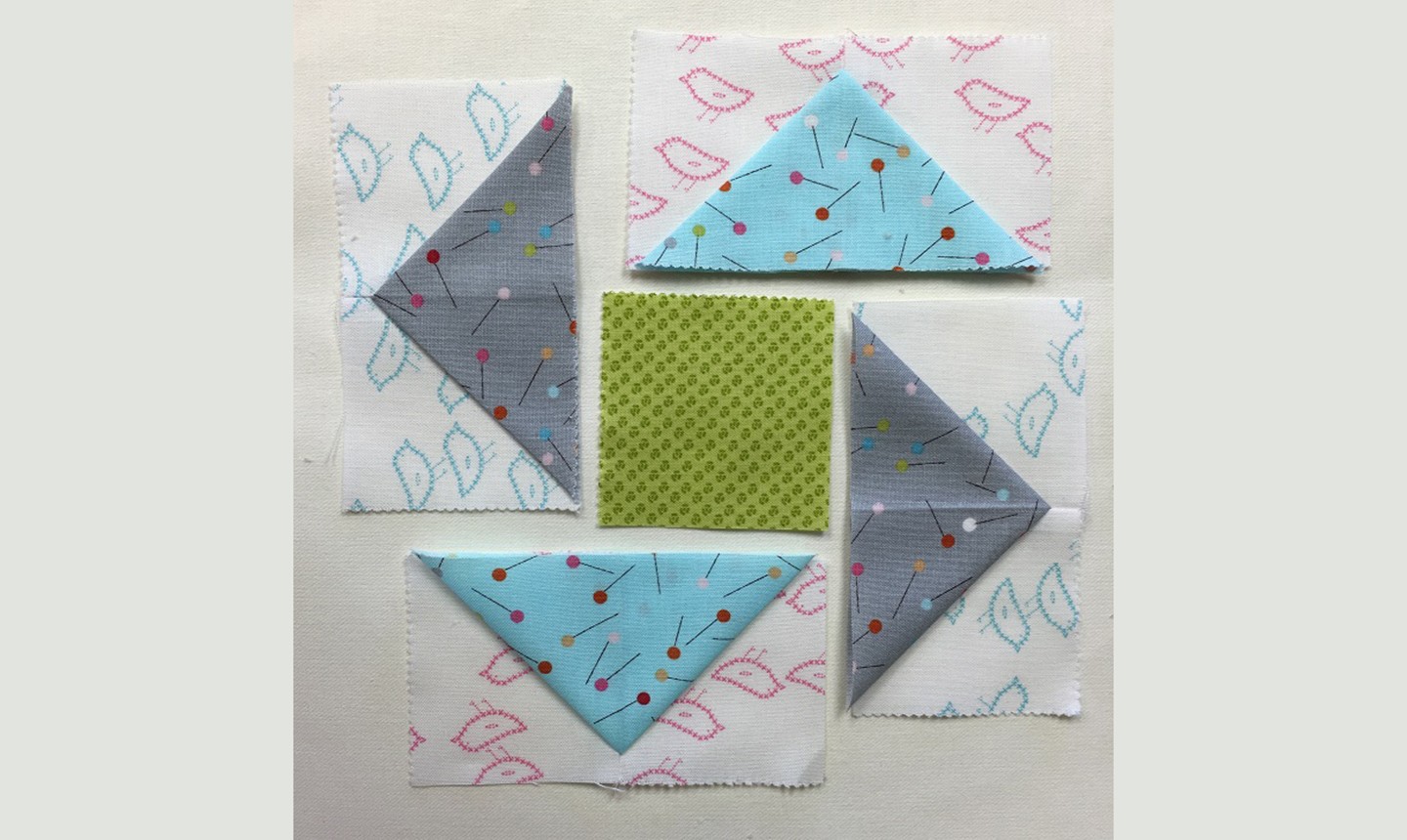 Place the folded flying geese units around the center square, as shown above. 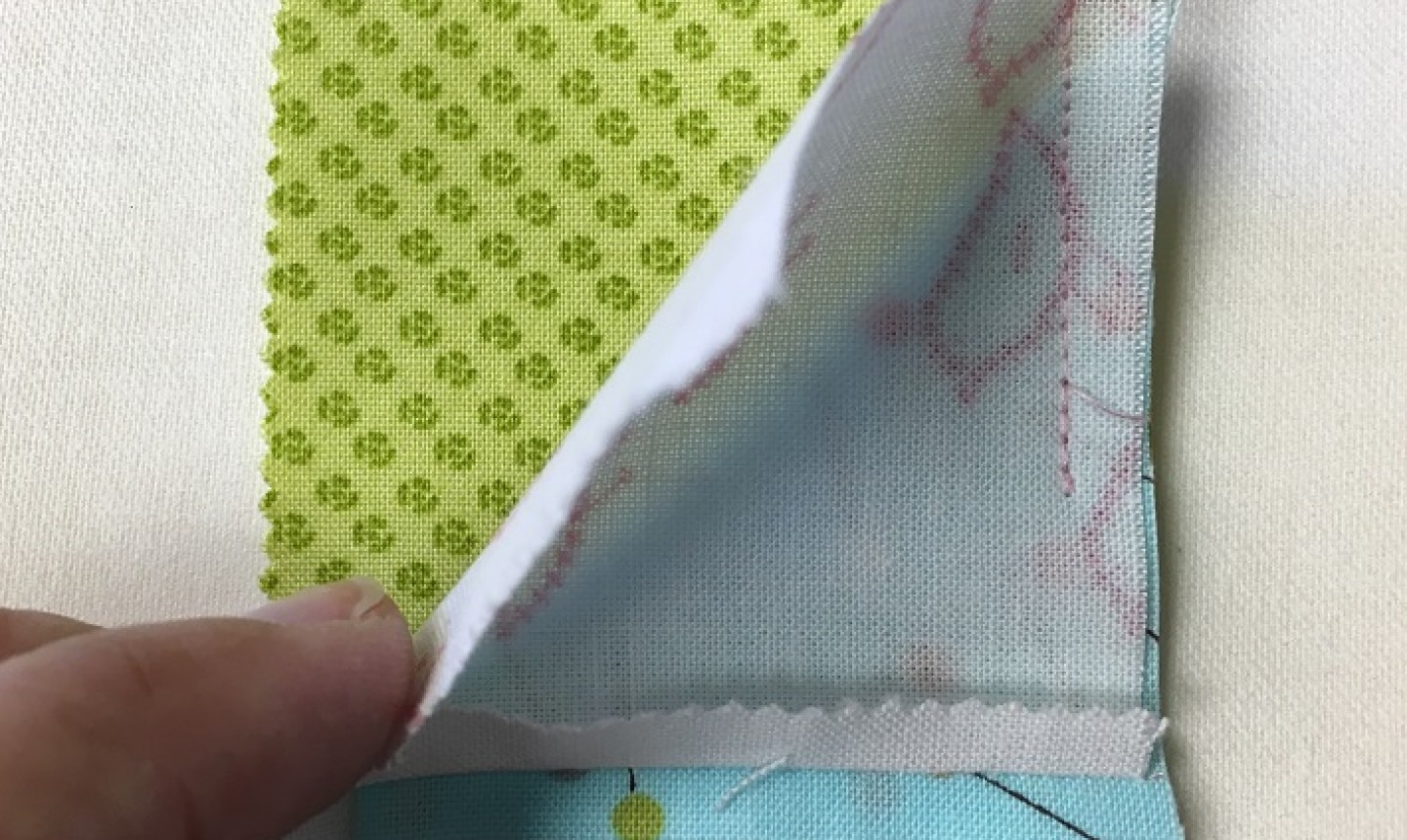 Layer the first flying geese unit on top of the center square, right sides together, lining up the top two corners. Sew the pieces together, making sure the folded unit doesn’t shift. Stop sewing about halfway to the seam and backstitch 2-3 stitches to secure. 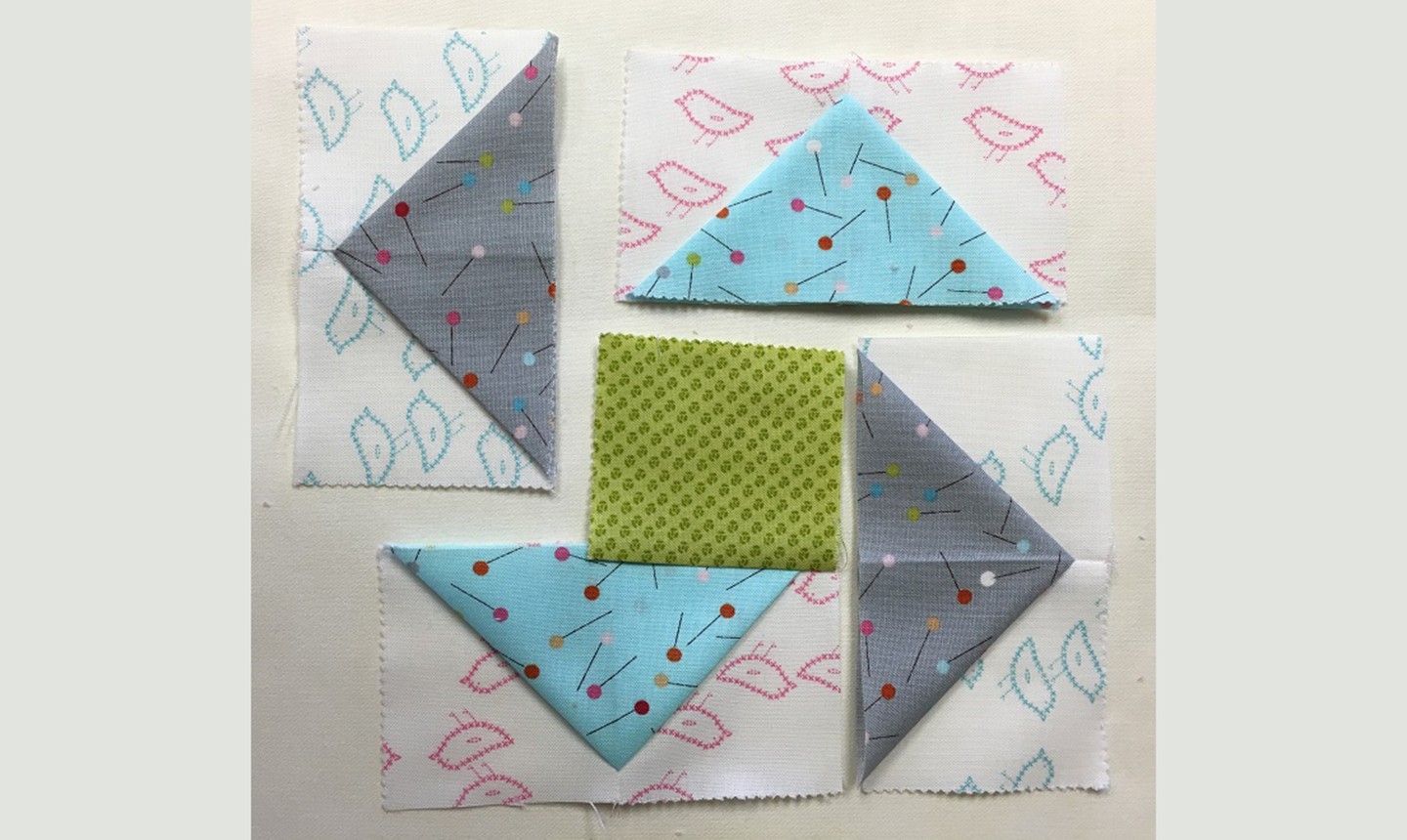 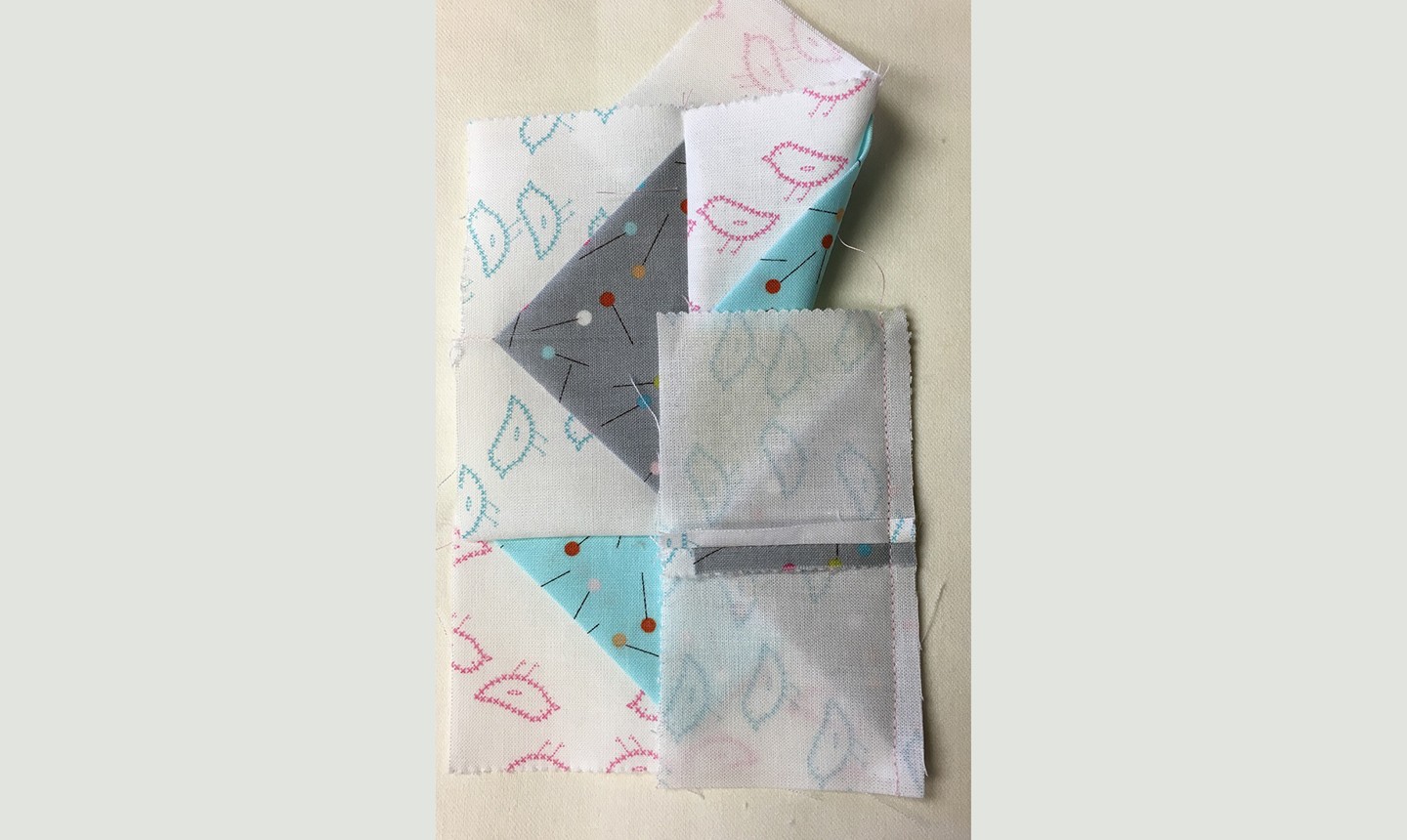 When adding the last unit, fold the first one out of the way, taking care not to catch it in the seam. 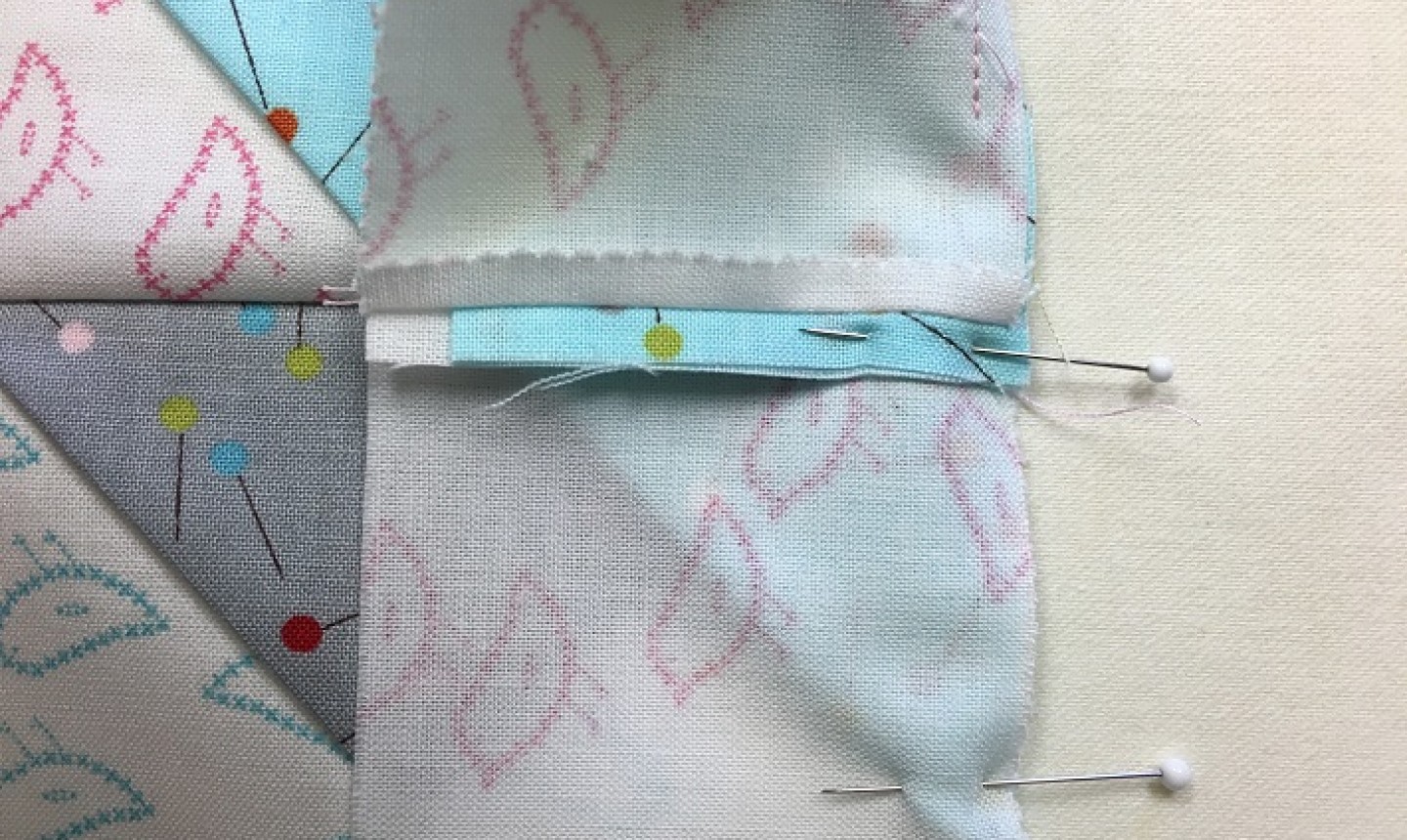 Pin the first seam that was left unfinished; the seams will line up with the last unit sewn. Start sewing a few stitches before the first seam ends and continue in the same manner as all of the other seams. Press the block.

The block is now secured together and should be a 6½” square. 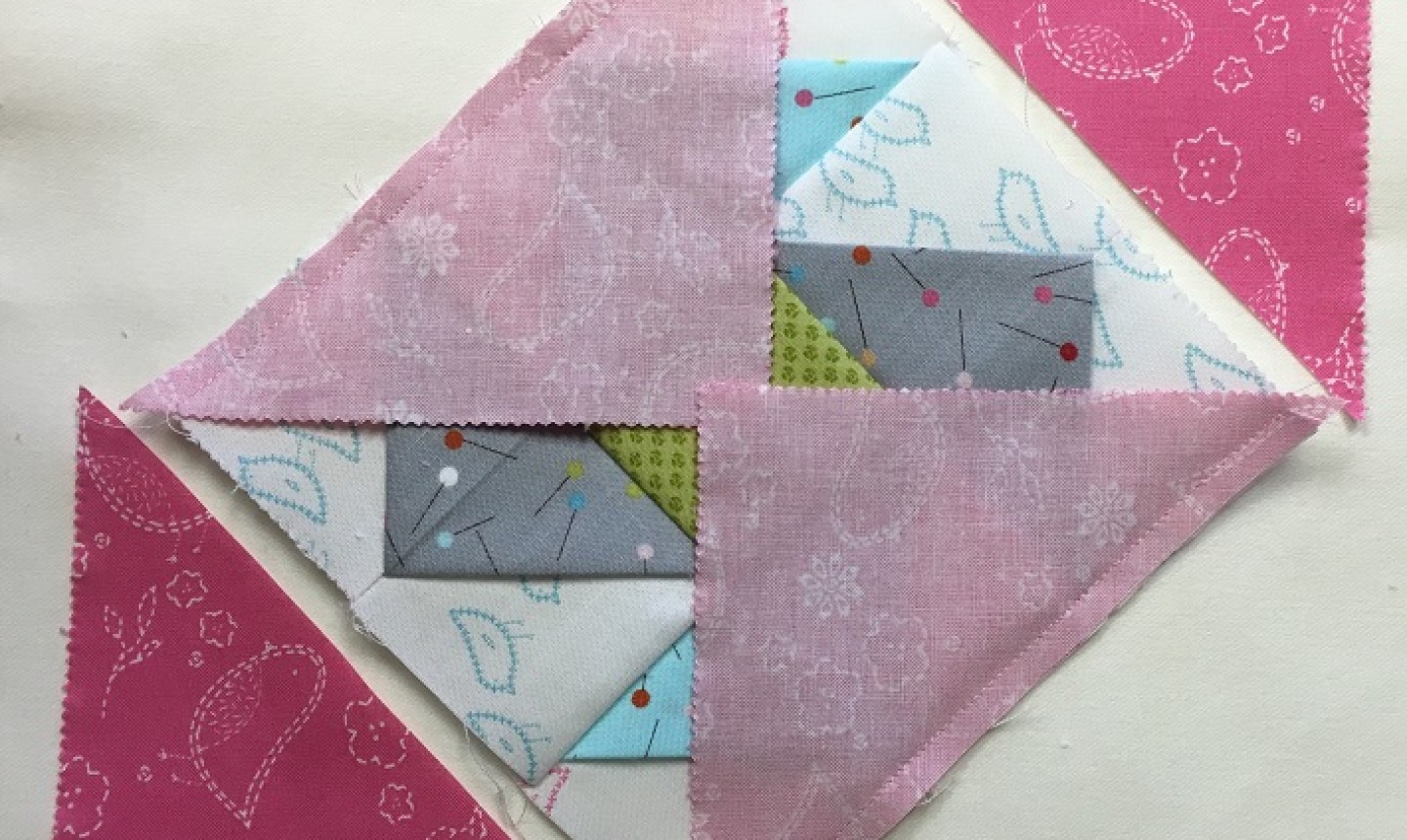 Place the triangles along each side of the flying geese units, as shown. Turn two opposite triangles onto the unit, right sides together, and stitch along the edge with a ¼” seam allowance. 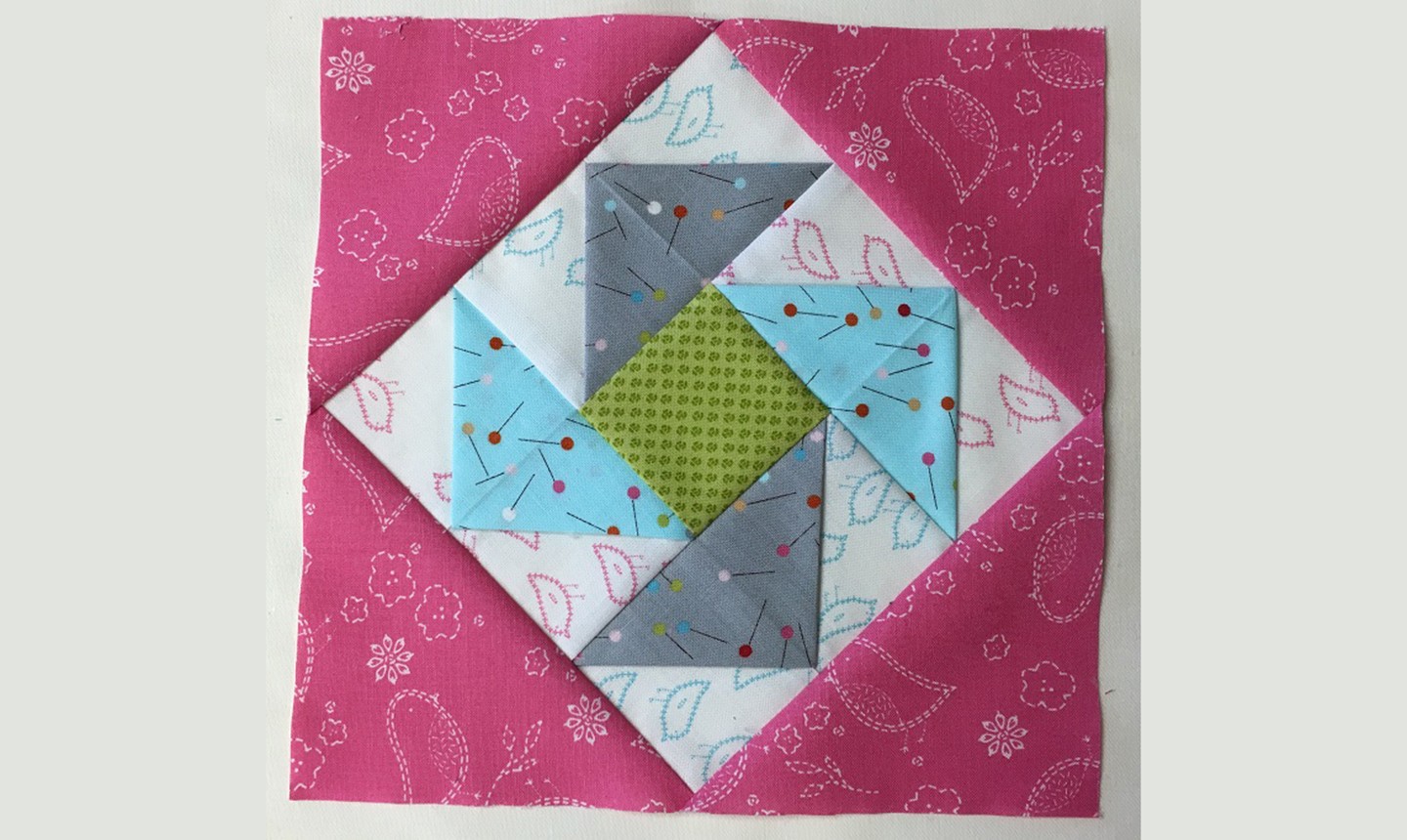 Open and press the seams toward the pink fabric. Repeat with the other two triangles. Trim the block so it’s an 8½” square. 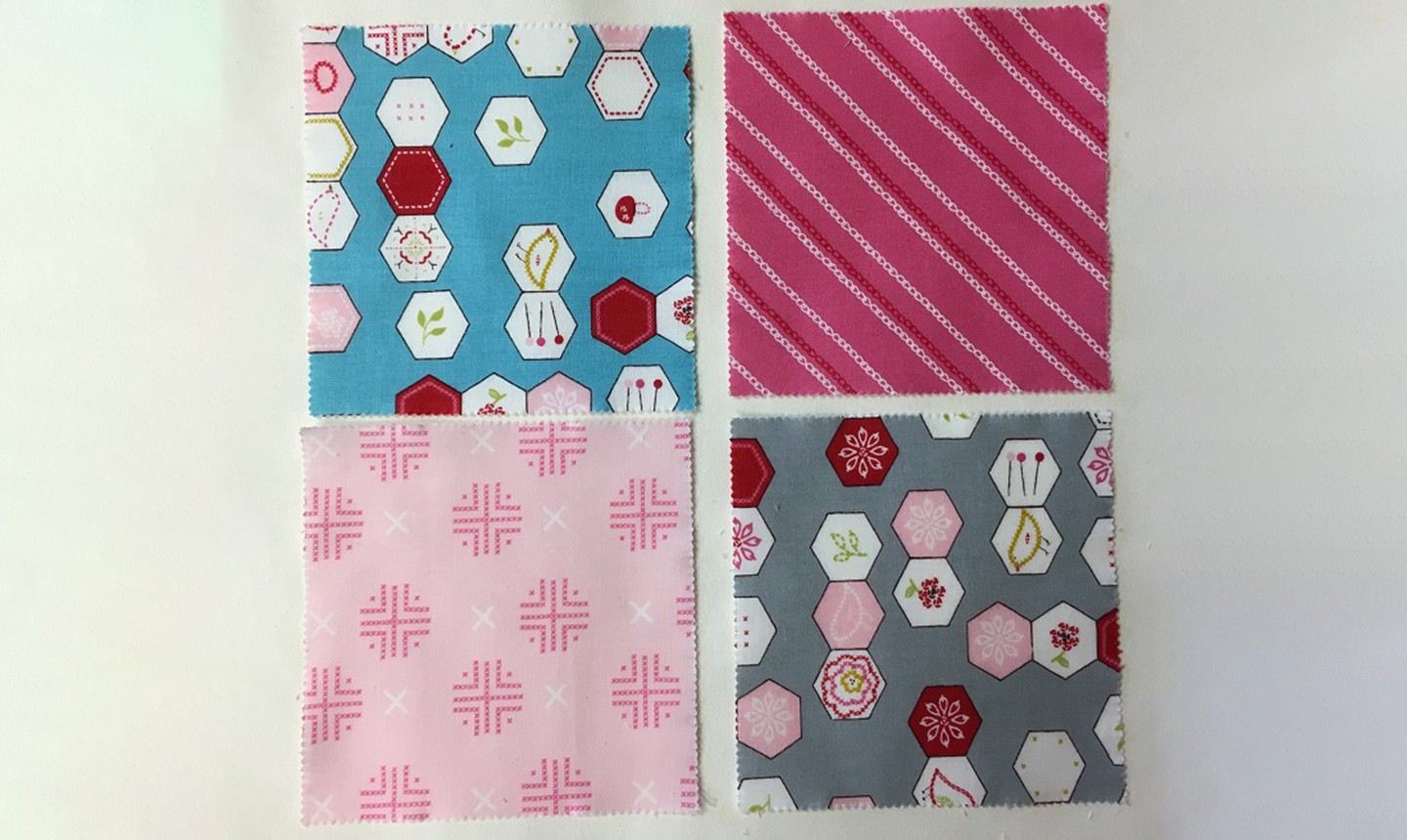 Sew four charms into a four-patch. Then pinwheel press the seams. 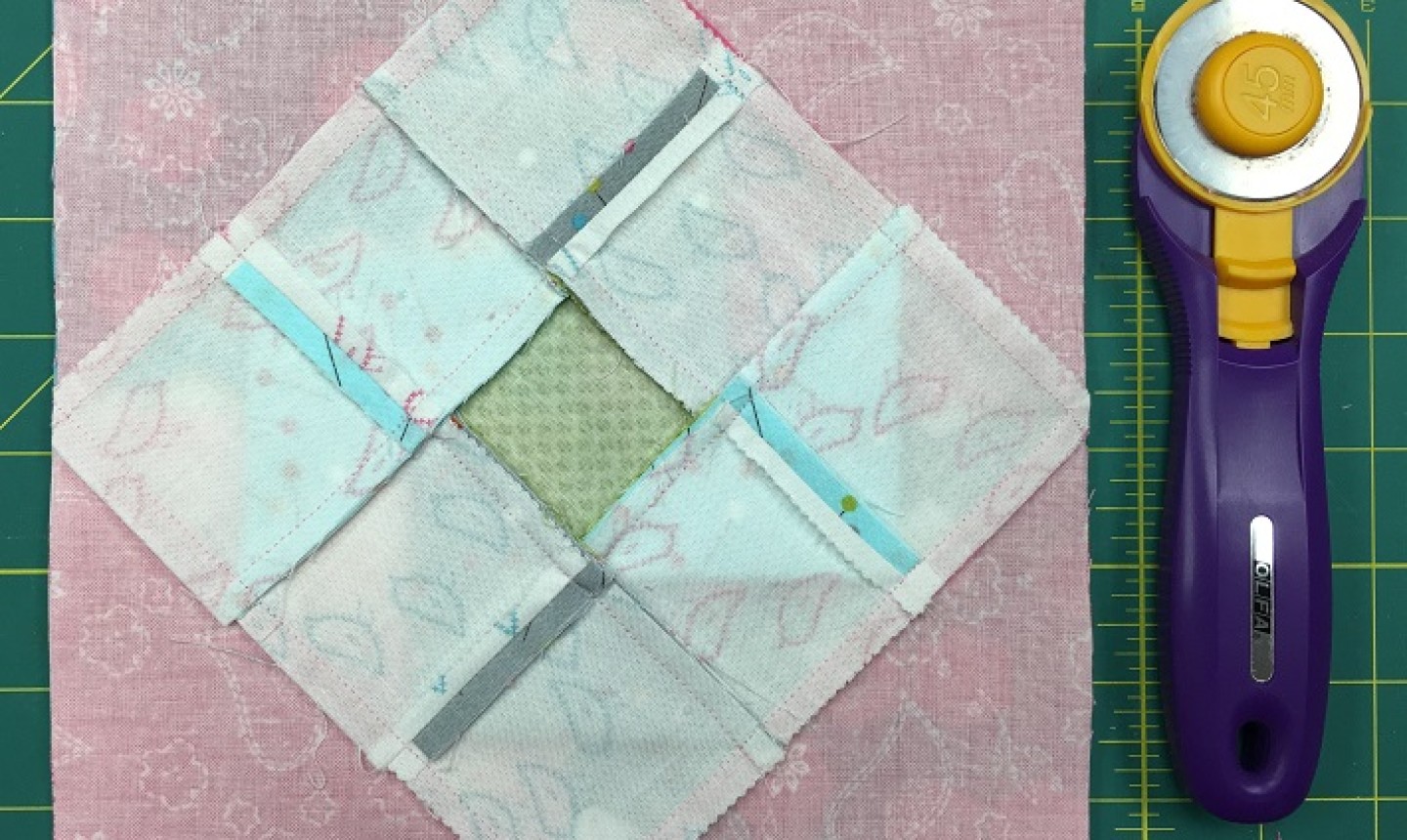 Layer the front, batting and backing to make a quilt sandwich. The batting should be on the bottom, followed by the backing and then quilt top. The backing and quilt top should be placed right sides together.

Trim everything to an 8½” square. Take care to center the backing so the seams line up with the points on the front. 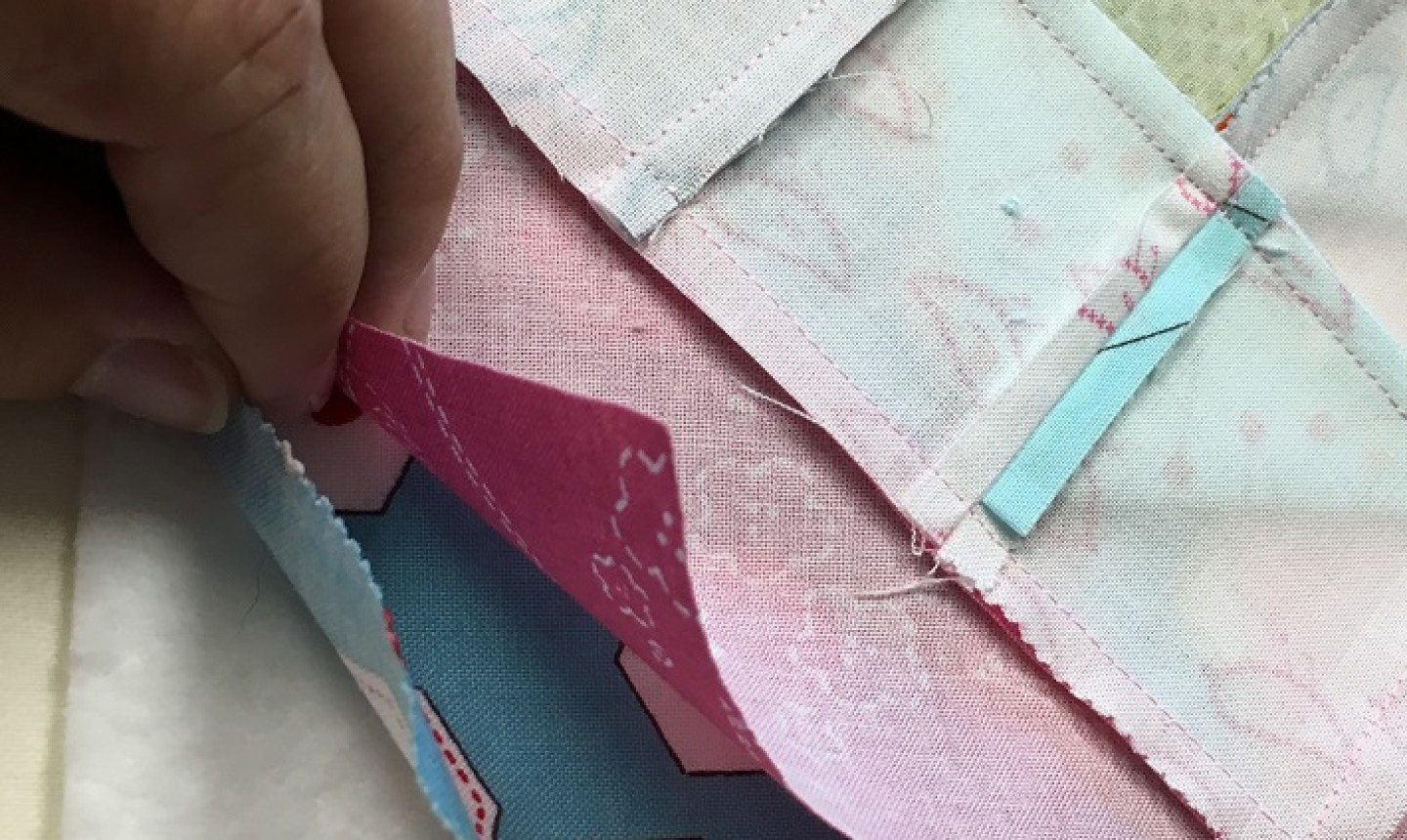 Sew ¼” away from the edge around the perimeter, leaving a 3″ opening for turning.

Good to Know: This method of closing the edges is called a pillowcase binding, because it can be turned inside out like a pillowcase. 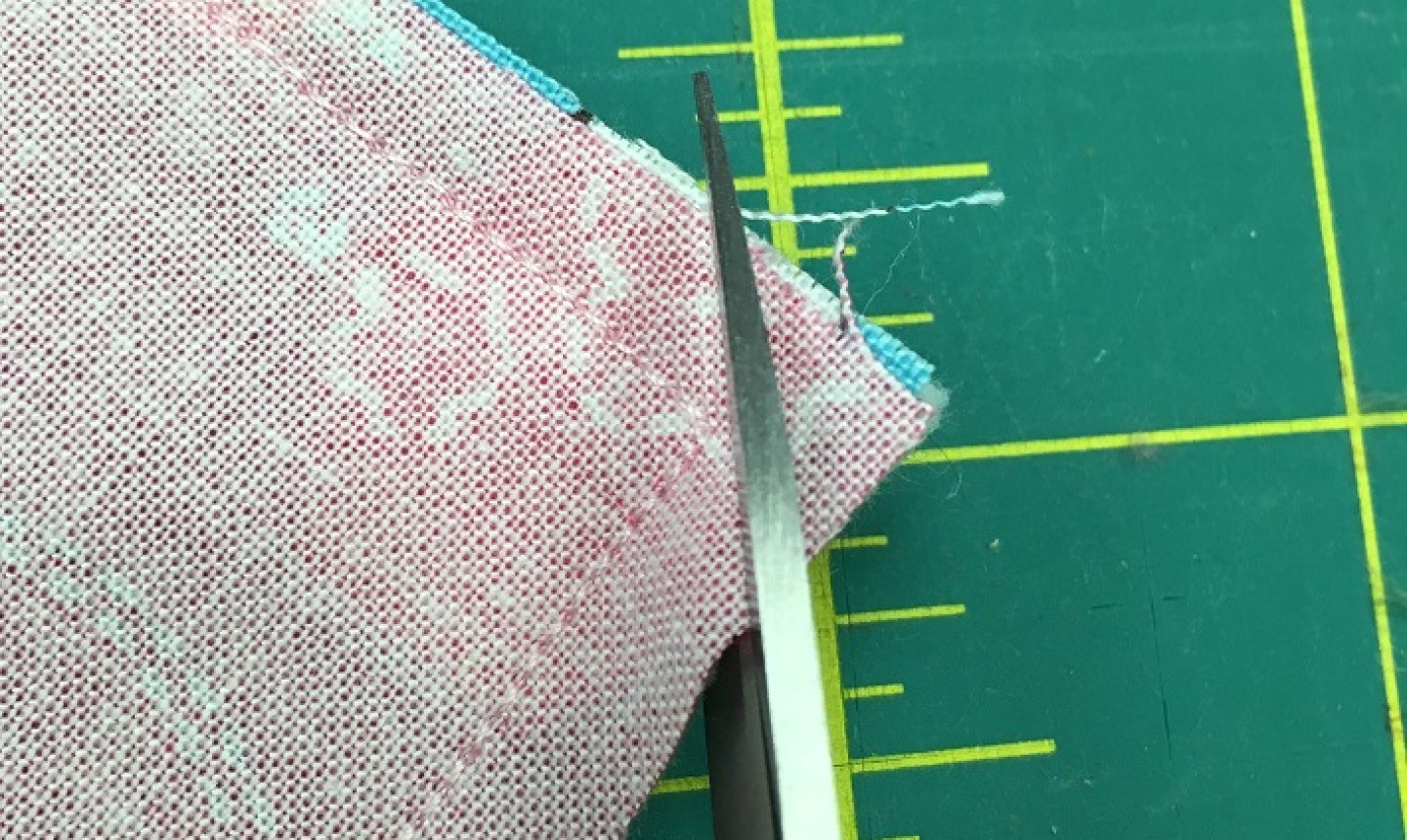 Snip the corners, being careful not to clip the stitches, to reduce bulk. 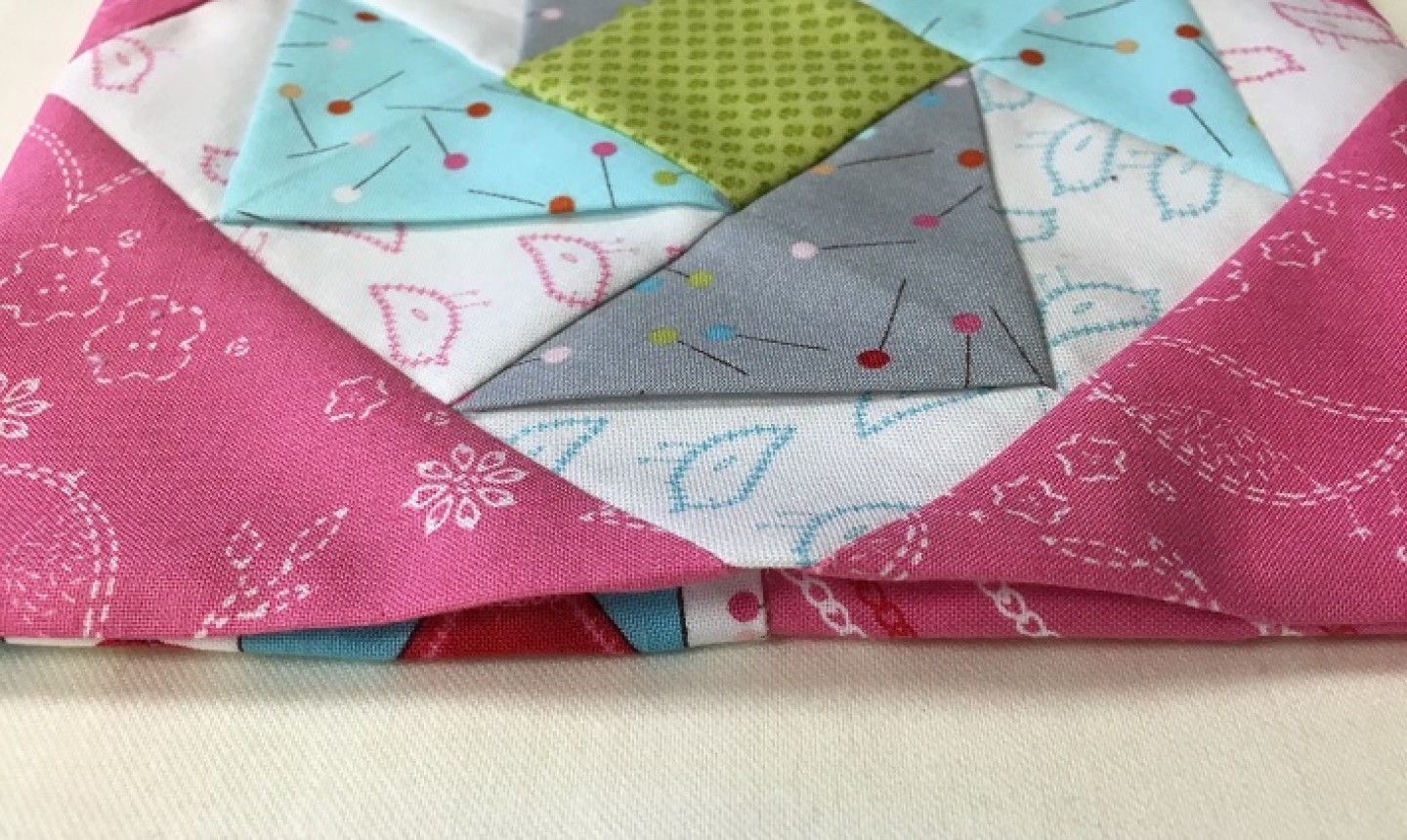 Turn the mug rug right-side out and press flat. Turn the seams of the opening inside the mug rug and stitch it closed. 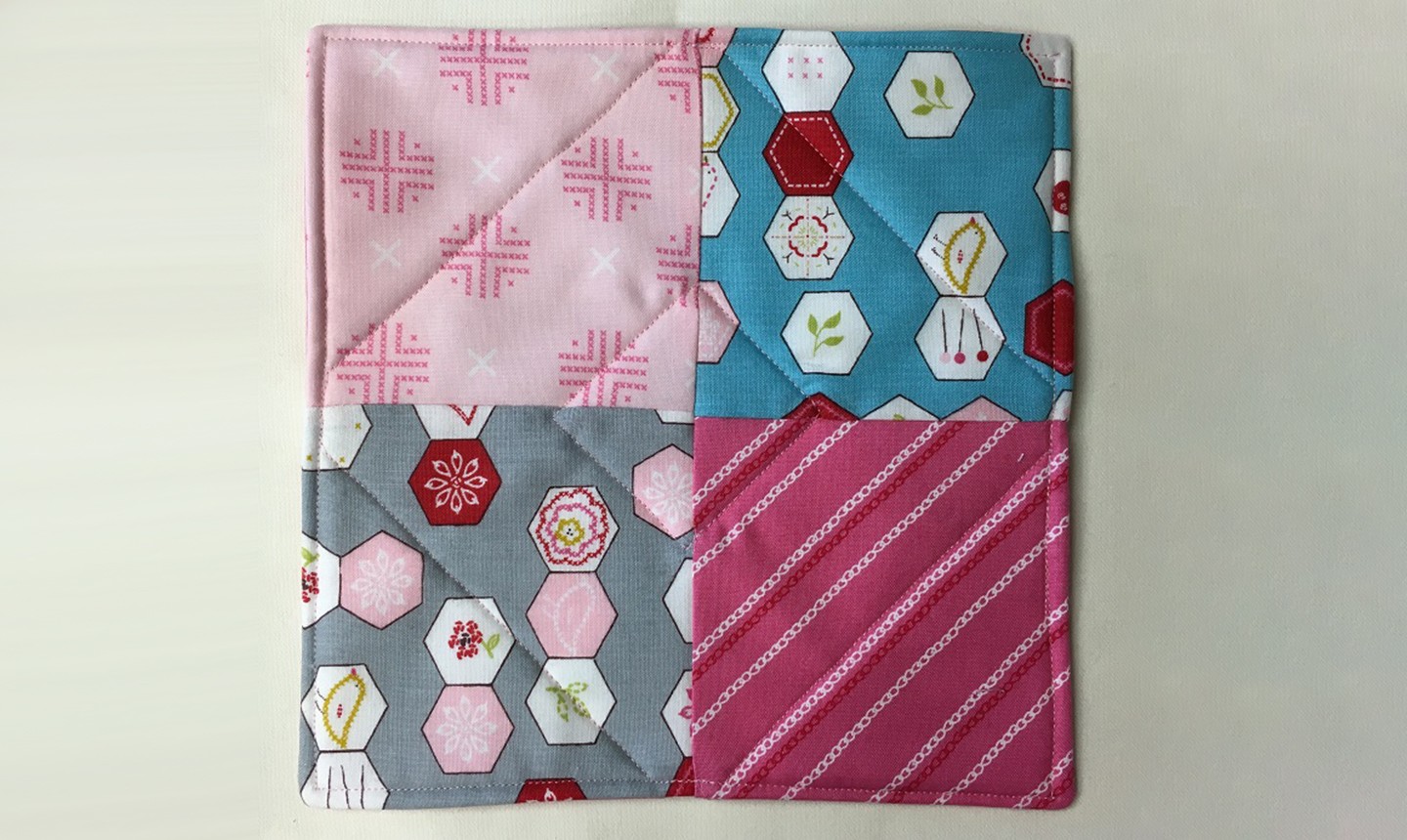 Quilt the mug rug as desired. We used a walking foot to stitch around the center square and the flying geese unit. 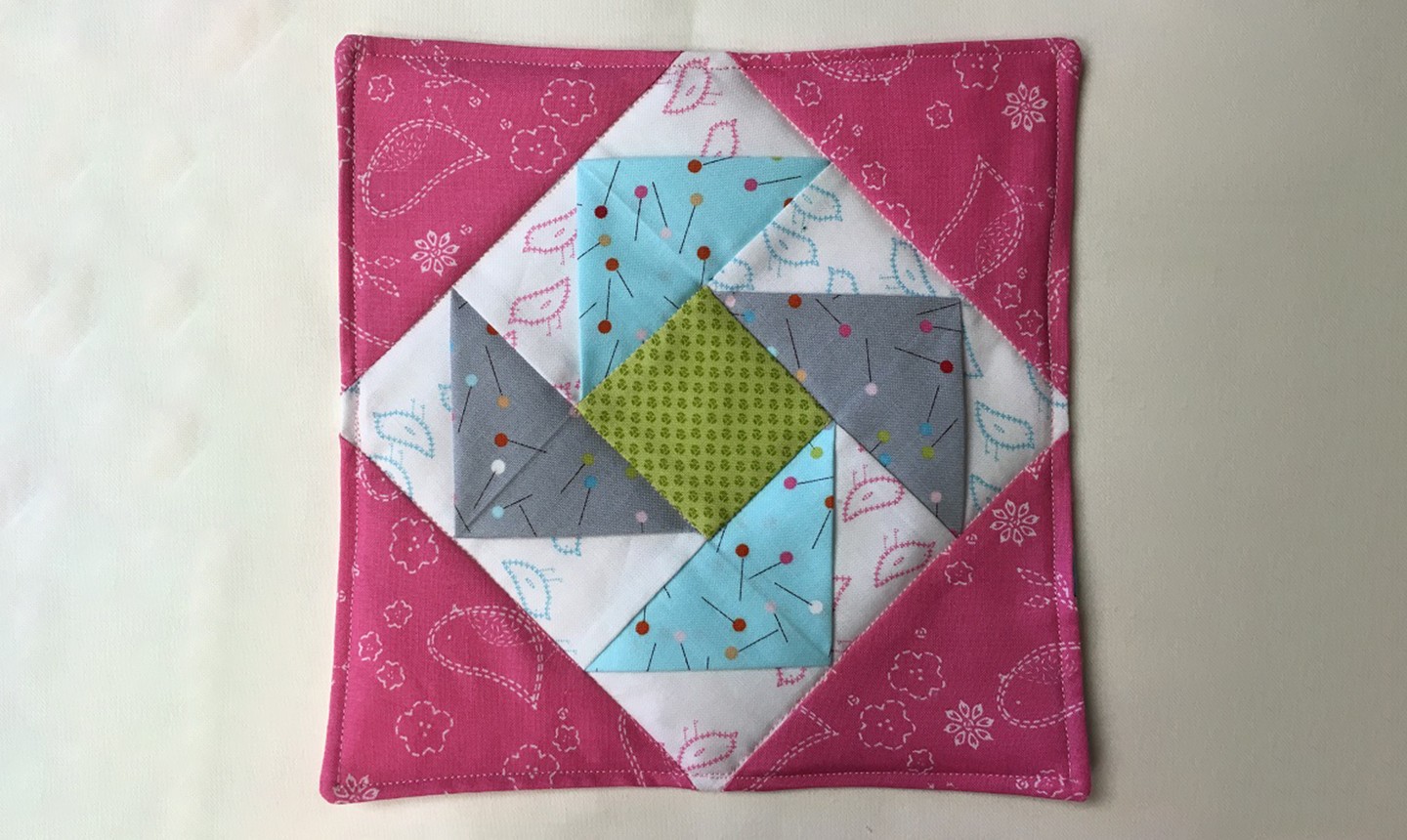 You’ve got a new mug rug!