Buttercream vs. fondant: which is the icing on your cake? 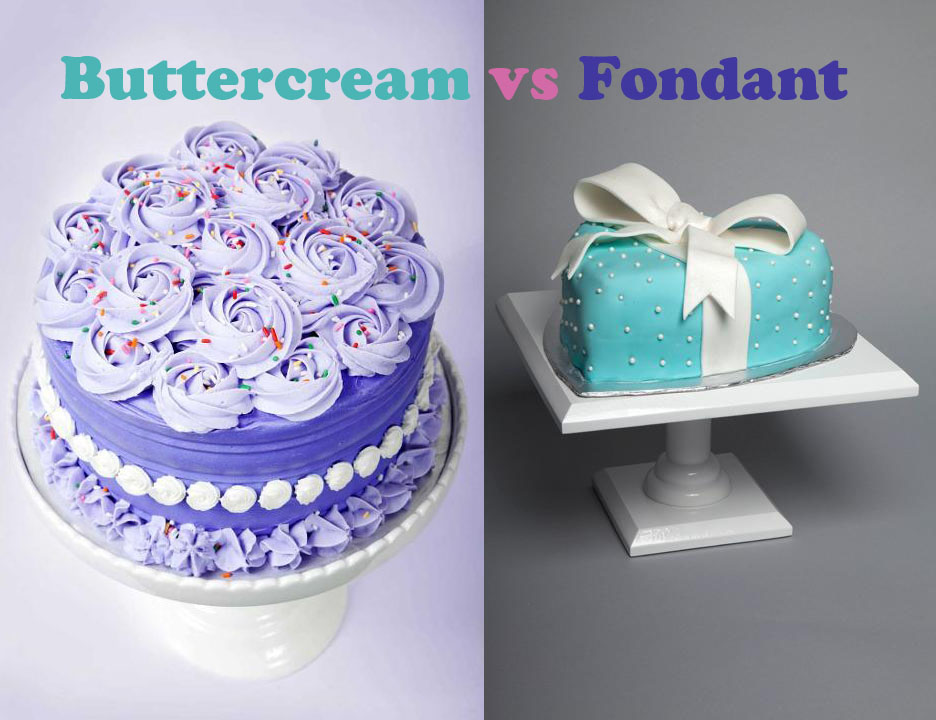 When it comes to decorating, there are distinct advantages to each. Some love the moldable, shapable nature of fondant. Some fondon’t like the flavor. Some adore the luxuriant taste and texture of buttercream, but find it a hassle to work with and transport.

To get you excited about topping your cakes and to fill you in on which projects might be best suited to each decorating medium, here’s a brief review of fondant and buttercream, with royal icing thrown into the mix as well. 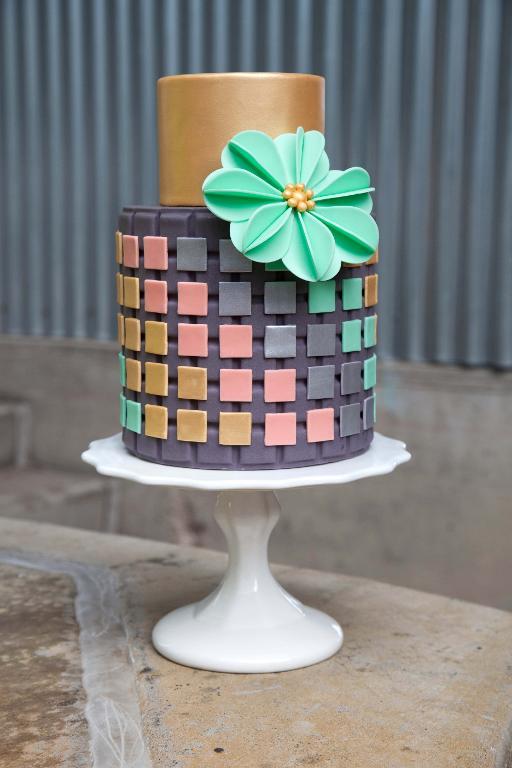 Fondant is composed primarily of confectioners’ sugar, corn syrup, and water, which are melted together and then formed into a paste which is somewhat clay-like in consistency. Recipes can vary, sometimes including a fat, sometimes employing gelatin or melted marshmallows for its unique consistency.

Because of its easily “workable” clay-like consistency, fondant is well suited for a variety of decorating techniques. It can be rolled and used to easily cover a cake for a smooth, polished appearance.

Because of the smooth, flat surface which fondant can create on a cake, it tends to work better for transfer methods. It can also can be used to create fondant cake toppers of various shapes and characters, which can add a high level of personalization to a cake.

Fondant is great for making cutouts. It can be rolled and cut out into shapes using fondant or cookie cutters, which can be used as decorating elements.

Fondant is not well suited for piping. You might be able to extrude some fondant through a piping tip, but it is not easy, and the results are not as smooth or fluid as buttercream.

While it’s not extremely difficult to make fondant, it requires much more time and effort than making buttercream. Even many cake professionals will purchase premade fondant rather than making their own.

Fondant can dry out quite easily, and this can lead to cracks or tears in the finished product. Fondant must be stored properly, or it will harden and be unusable.

The texture of fondant doesn’t work well as a cake filling — it can be too tough. It is more appropriate for a cake topping. 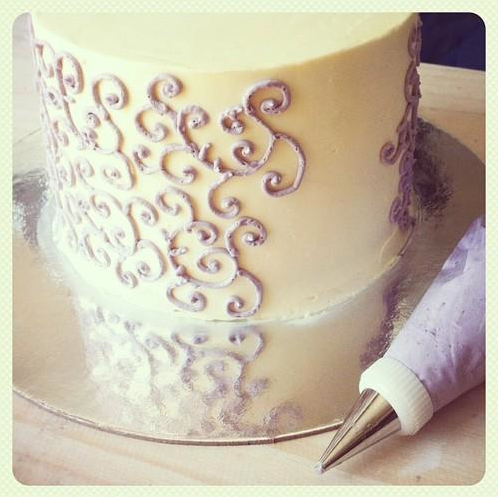 A mixture consisting primarily of butter (or shortening) and confectioners’ sugar, which are whipped together to form a soft, creamy consistency. Some recipes include egg whites, such as Swiss meringue buttercream. It can be flavored and tinted in a plethora of different ways, and can be used as both cake topping and filling.

Its softer texture makes it easy to load into a pastry bag and pipe. This means that buttercream is a great medium for piping borders, patterns and even flowers on to cakes. It’s also well suited for writing names.

Buttercream is made with far more fat than fondant. This can give it a more luxuriant, rich flavor that many prefer, taste-wise, to fondant.

The formula for making buttercream is very forgiving. If you’ve added too much sugar and the mixture is stiff, you can thin it with a little milk, cream or even water. If it is too thin, simply add more sugar. It’s easy to adjust buttercream until it has reached your desired consistency.

Buttercream’s rich taste and texture make it well suited to a variety of flavorings, as varied as fruit puree to Nutella. This makes it a flavorful addition to either the top or the filling in a cake.

Because of its softer texture, buttercream can be more susceptible to the elements, such as heat and humidity. Making a crusting buttercream (one that sets firm) can help to make buttercream sturdier, but it is still more delicate than fondant. This can also make it stressful to transport.

Even the most perfectly spread and smoothed buttercream will never lie as flat and smooth as a layer of fondant. For some, this makes buttercream the less sophisticated looking cake topping.

Buttercream’s soft texture also makes it ill-suited for sculpting. Try making a figurine out of buttercream and you’ll easily figure out why. 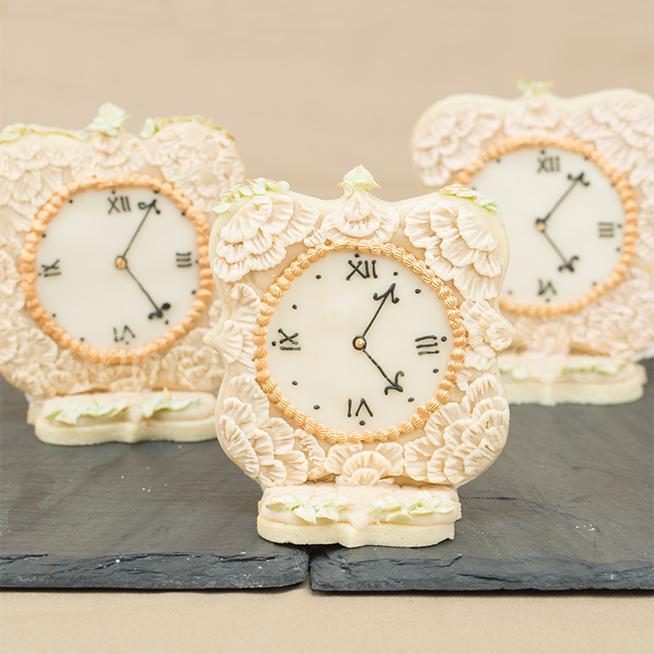 What about royal icing?

Where does royal icing fit into all of this, you ask?

is made primarily from egg whites and confectioners’ sugar. It starts out soft, but sets hard to the touch.

You can make decorations in advance that will dry firm and last for a long time. Piped flowers or even homemade sprinkles can be made in advance and used whenever you’d like to pull from your stock.

The firm, dried texture makes it well suited for decorating cookies. It allows for an iced decorated look but an easy-to-transport consistency.

Royal icing can crack. This makes it ill-suited for covering large surface areas (for instance an entire cake) or curved surfaces.

Royal icing is rarely the most nuanced of flavors, with a somewhat bland (albeit sweet) flavor. It is more intended as a garnish or decorating medium than a flavorful topping.

Since royal icing dries hard, it’s not a good choice for filling a cake, unless you want it to crunch when you take a bite.

It’s all in those nitty gritty details

Buttercream Skills covers buttercream basics, from whipping buttercream to the perfect spreading and piping consistencies, and offers a great how-to for piping like a pro, creating stringwork, scrolls, zigzags and ribbon roses. Decorating with Fondant walks through the important steps for getting familiar with fondant, including making it, rolling it and using it to cover a variety of different cakes.

Which type of icing do you prefer to work with in your cake decorating?