If you’d like to become a great bread maker, it’s important to learn all that you can about some of the problems you might run into. These tips and tricks can help you avoid common pitfalls while baking bread , which means you’ll end up with more carb-o-licious results. 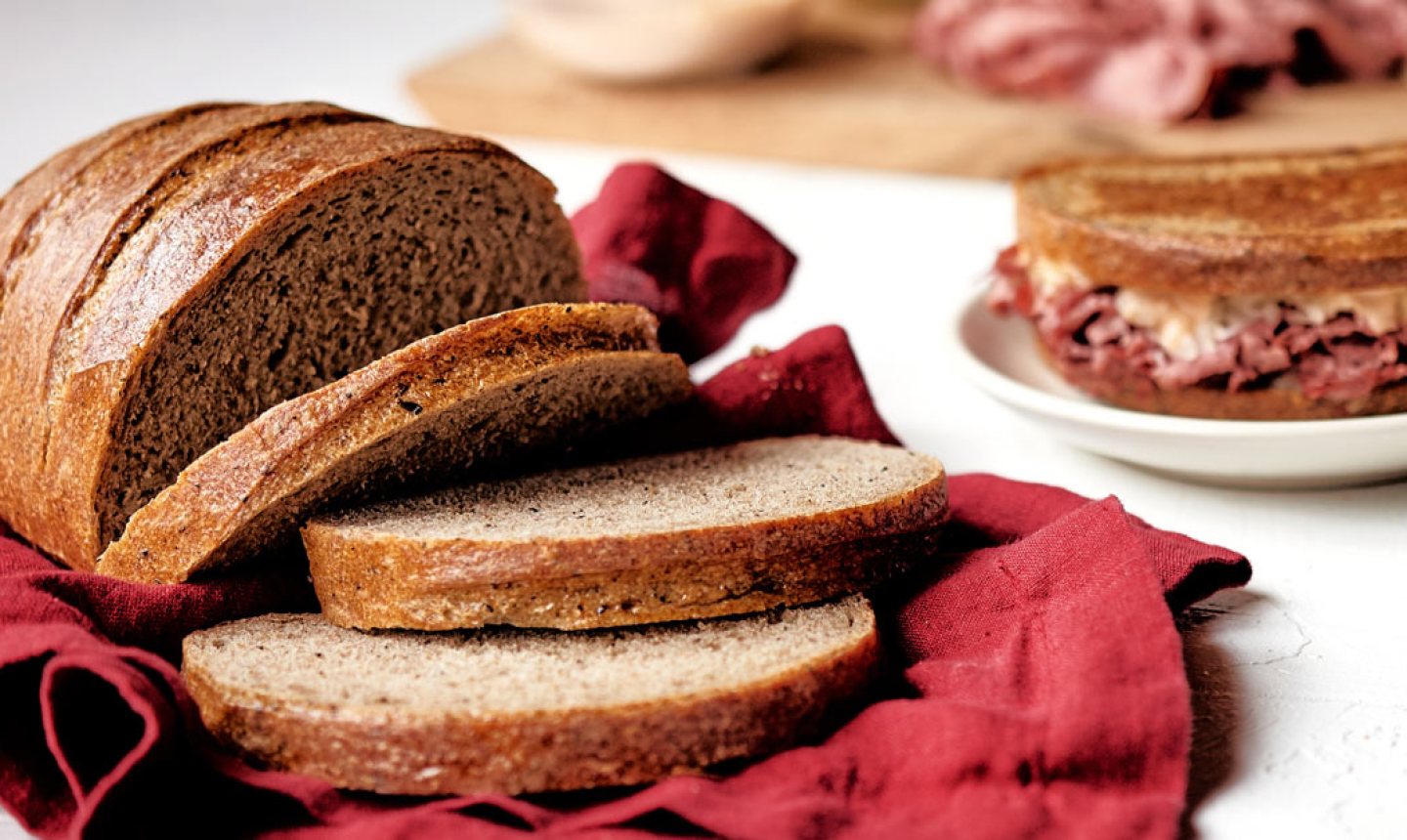 While there’s bound to be some trial and error as you increase your bread baking prowess, your journey doesn’t have to be fraught with inedible loaves. Here, we’ll address some common bread making problems, and offer potential solutions so that you can avoid errors in your baking adventures. 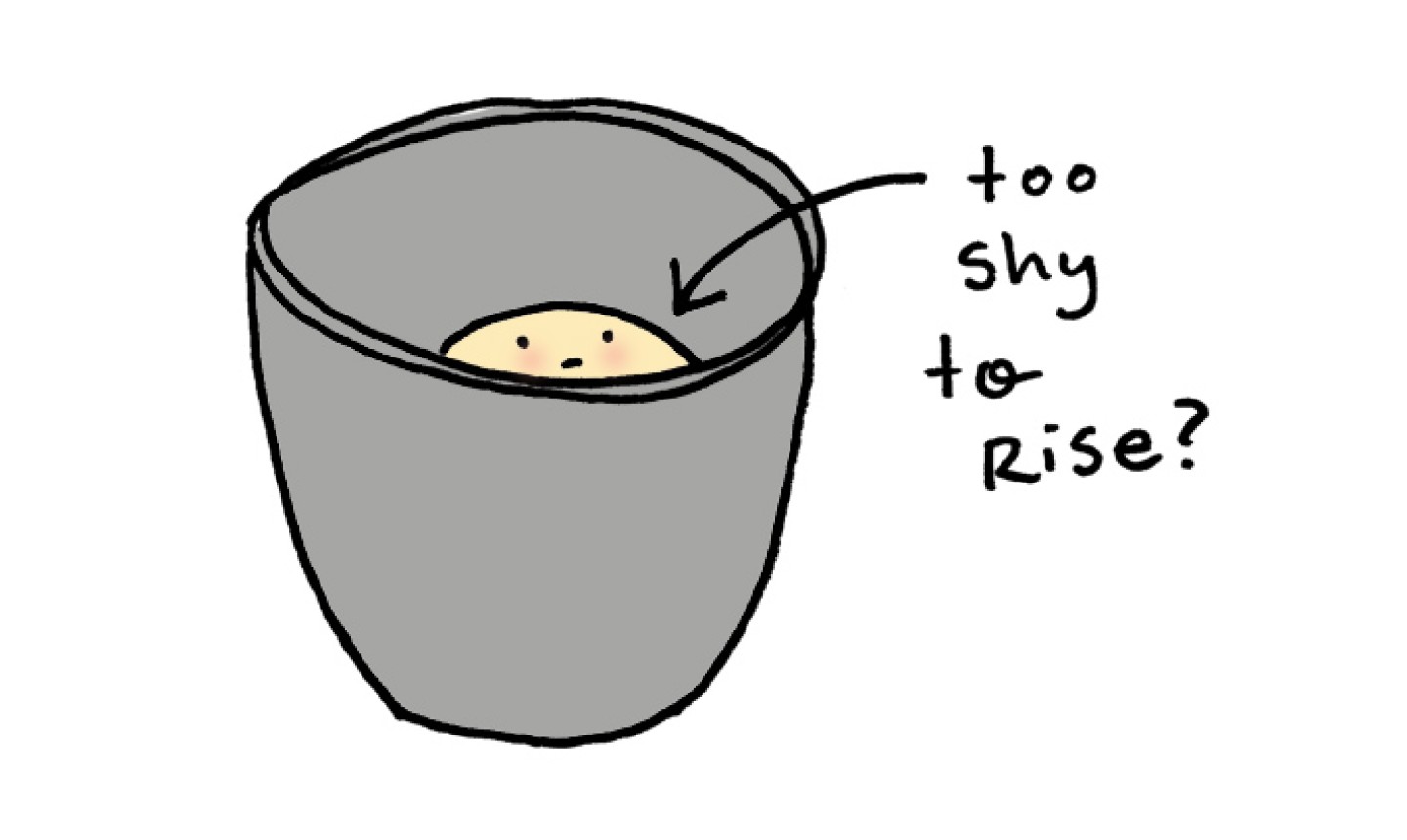 You’ve mixed and kneaded your dough; in most recipes, this is the point where you let your dough rise. But what if yours doesn’t?

Your yeast is stale or inactive.

Perhaps your yeast has been languishing in your kitchen for too long. Or, you could have accidentally killed the yeast by combining water that’s too hot — in most bread recipes, the ideal temperature for water is around 105-110 F; warm, but not hot.

Either way, the yeast isn’t properly activated so that it can do its work. For best results, be sure to check the expiration date on your yeast, and make sure that the temperature of your water or liquid matches what is specified in the recipe.

Your kitchen is too cold.

If your kitchen feels more like a refrigerator, this could by why your dough isn’t rising. In general, bread will rise best at a slightly warm room temperature. At a cooler temperature, it can take significantly longer for dough to rise. Either leave the dough to rise for a longer period of time, or transfer it to a warmer place.

Either during the initial rising period or during the proofing period, your bread dough develops a sort of crusty exterior or “skin.” This is usually because you didn’t cover the dough.

Most recipes call for covering the dough during both rising periods, and with good reason: you don’t want your bread to form a crust before it bakes.

Picture this: Your bread is in the oven, and it’s rising and baking beautifully…and then, all of a sudden, it just falls flat in the center. Chances are, if you find a valley in the middle of your loaf, one of these things was to blame:

If the dough is too wet, it won’t rise properly. Try reducing the amount of liquid by a tablespoon or two.

Read your recipe carefully. While most people buy yeast in packets, not all recipes require the entire packet of yeast. If you’ve added too much yeast, it can make your bread rapidly rise then fall.

Similarly, using the wrong type of yeast can effect the recipe. If you used rapid-rise yeast where the recipe called for regular yeast, for instance, this can have an undesired rising and falling effect. Check out this post to learn more about the different types of yeast.

Did you add less salt than called for in the recipe (or forget to add it entirely)? That could be to blame. Salt slows down the yeast’s rising process, so omitting the salt can have a similar effect to adding too much yeast: a rapid rise, then big deflation.

As advice moving forward, if you suspect you might have measured incorrectly, simply try the recipe again. If you’re sure you followed it to the letter, try one of these fixes (don’t try them all at the same time) and see if it helps! 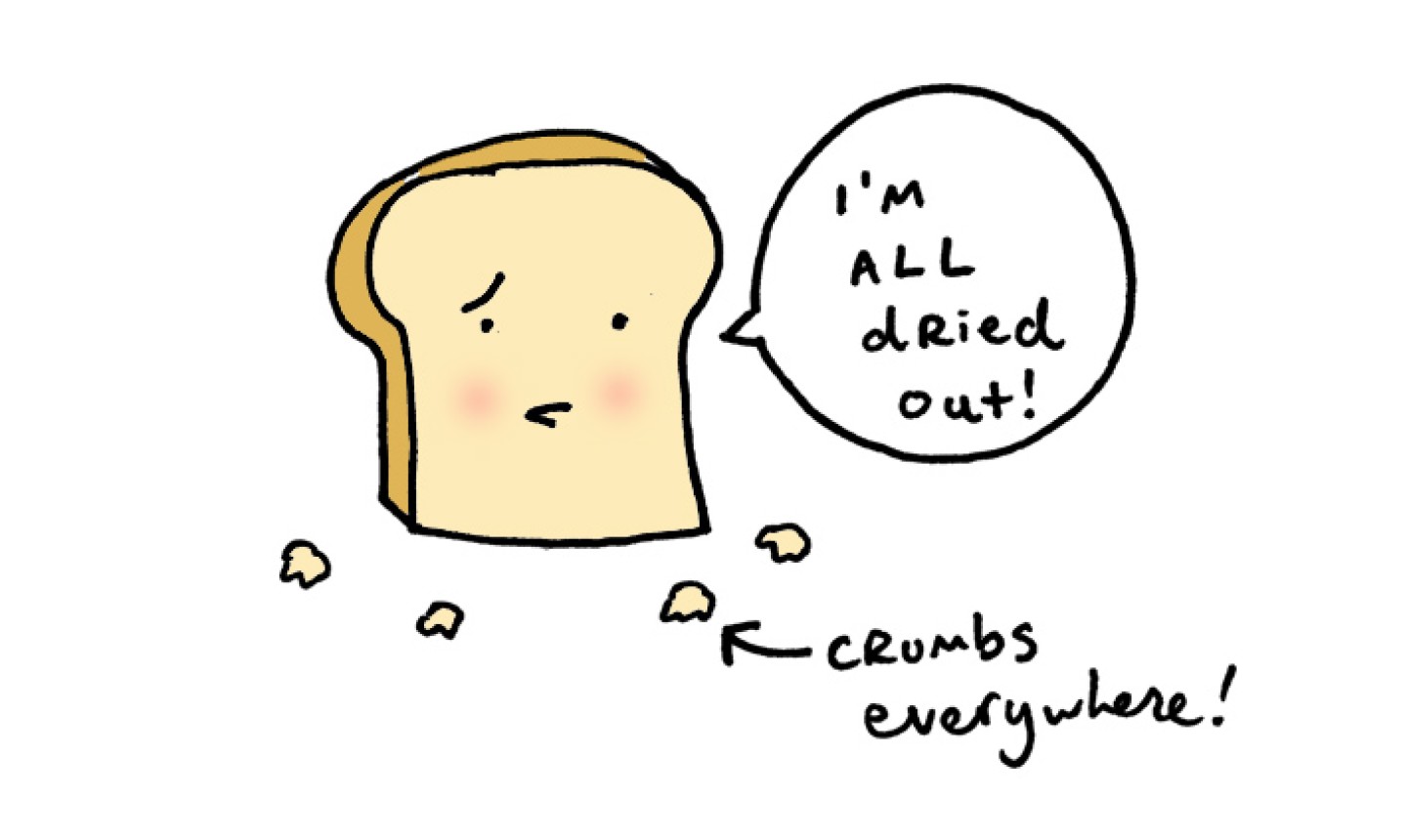 Even though your bread just came out of the oven hours ago, it already seems dried-out. Here are some potential causes and fixes:

Swapping whole-grain flour for some or all of the flour called for in the recipe could cause your bread to dry out. In general, when making whole-grain bread, you want to add a little more liquid to the recipe to compensate for these “thirstier” and more absorbent grains. This post details more tips for baking bread with whole grains!

p>What type of flour did you use to make your bread? Bread flour tends to be higher in protein, which helps keep your bread moist. If you thought you could substitute cake flour for the higher protein flour called for in your recipe, it could be to blame for a dry texture.

5. Your bread is still gooey inside.

Your bread looks perfect on top, but once sliced it, the center is still doughy. Typically, this is due to one of two things:

How can you know when bread is really done? For most breads, check the internal temperature: 190 F signifies it’s fully baked inside.

Even if you set your oven to the temperature called for in the recipe, it doesn’t mean that your oven attained that temperature. Ovens can vary. Put a thermometer inside of yours to make sure it’s accurate.

6. Your bread is burnt on top. 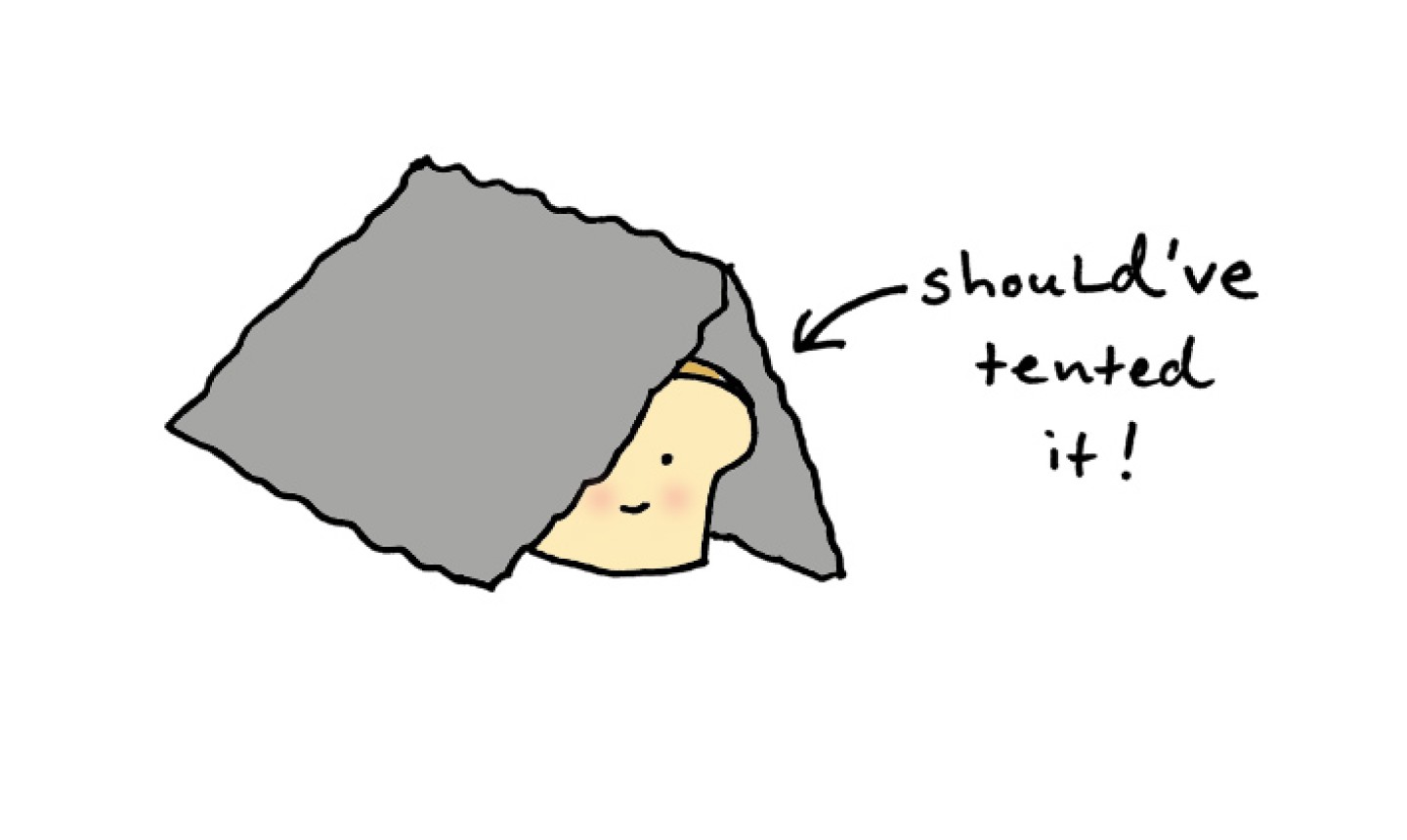 Your bread is perfectly baked, but it’s a little blackened on top. This doesn’t necessarily mean that you did anything wrong — it just means the top browned too rapidly.

Next time, if the top seems to be browning too quickly, prevent the dreaded burnt top by tenting the top of the bread with foil, as you would a pie crust, to keep the top from browning too rapidly.

7. Your bread has hard white bits inside. 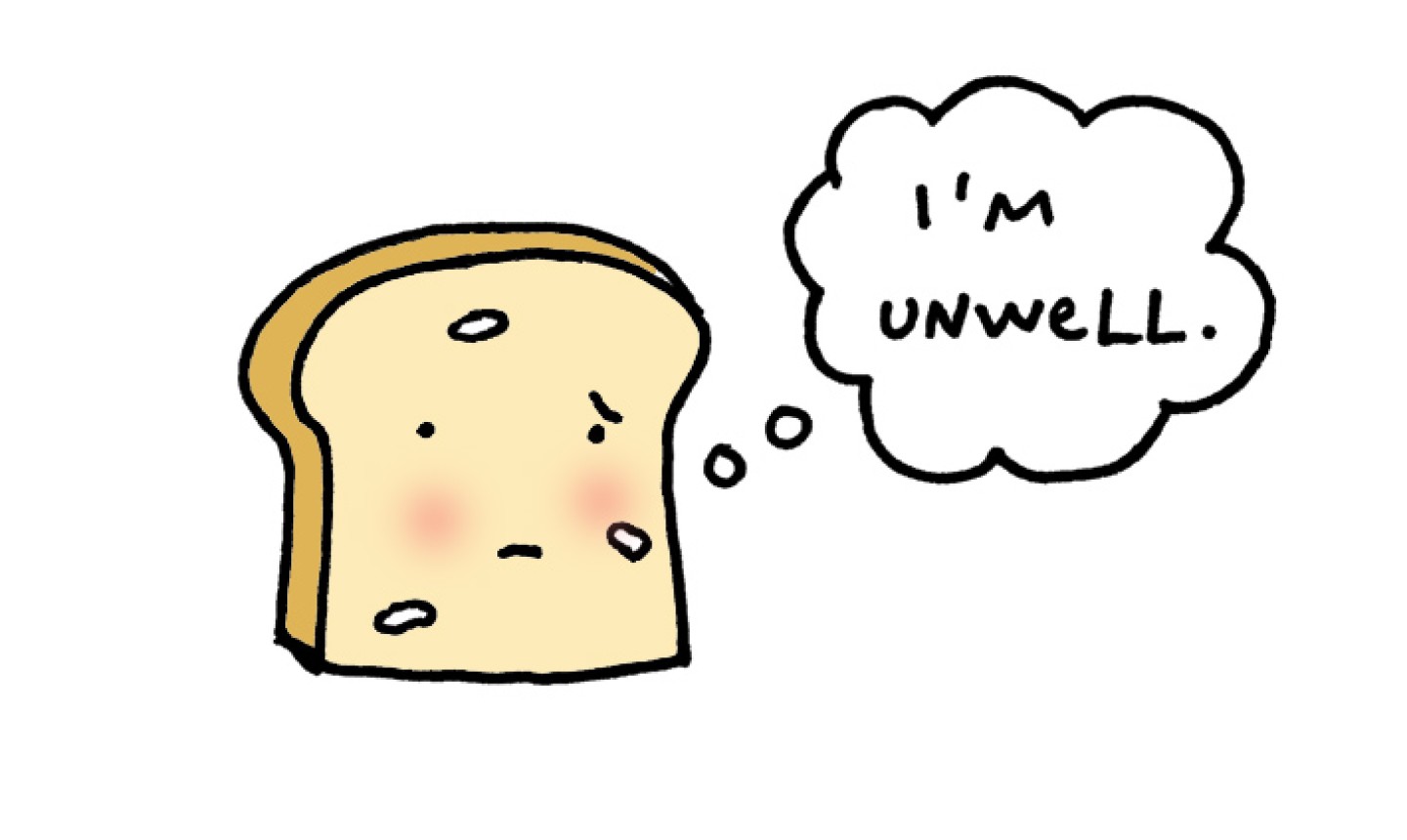 This one’s easy: You didn’t knead the dough enough, and bits of flour formed clumps that didn’t incorporate into the dough. Sift the flour first to ensure that it is lump-free to begin with, and knead sufficiently to remove any lumps before letting the dough rise.

A few holes are nice, but big empty pockets? Not so much. Is the inside of your bread more like Swiss cheese than sandwich vessel? Chances are, you forgot to deflate or punch the dough. This small step is important in attaining a firm “crumb” to your bread.

9. Your bread expands strangely while baking.

If your bread comes out of the oven looking like it has strange growths all over, chances are that you forgot to score it. Not all breads need to be scored on top, but many do. This creates little “vents” for heat to escape and so that the bread can expand evenly. Without scoring the bread, it can expand in unexpected ways.

There could be a few reasons your bread feels like a brick. Here are just a few:

It’s tempting to speed through long rising periods and just get your dough in the oven. But without the proper time to rise, your bread may end up far flatter and heavier than you’d like.

If you killed the yeast by using too-hot water, or used stale yeast, you may have inadvertently prevented the bread dough from rising properly. This can result in a dense loaf of bread. Be sure to check the expiration date on your yeast, and to use water or liquid that is lukewarm (105-110 F) in your recipe. 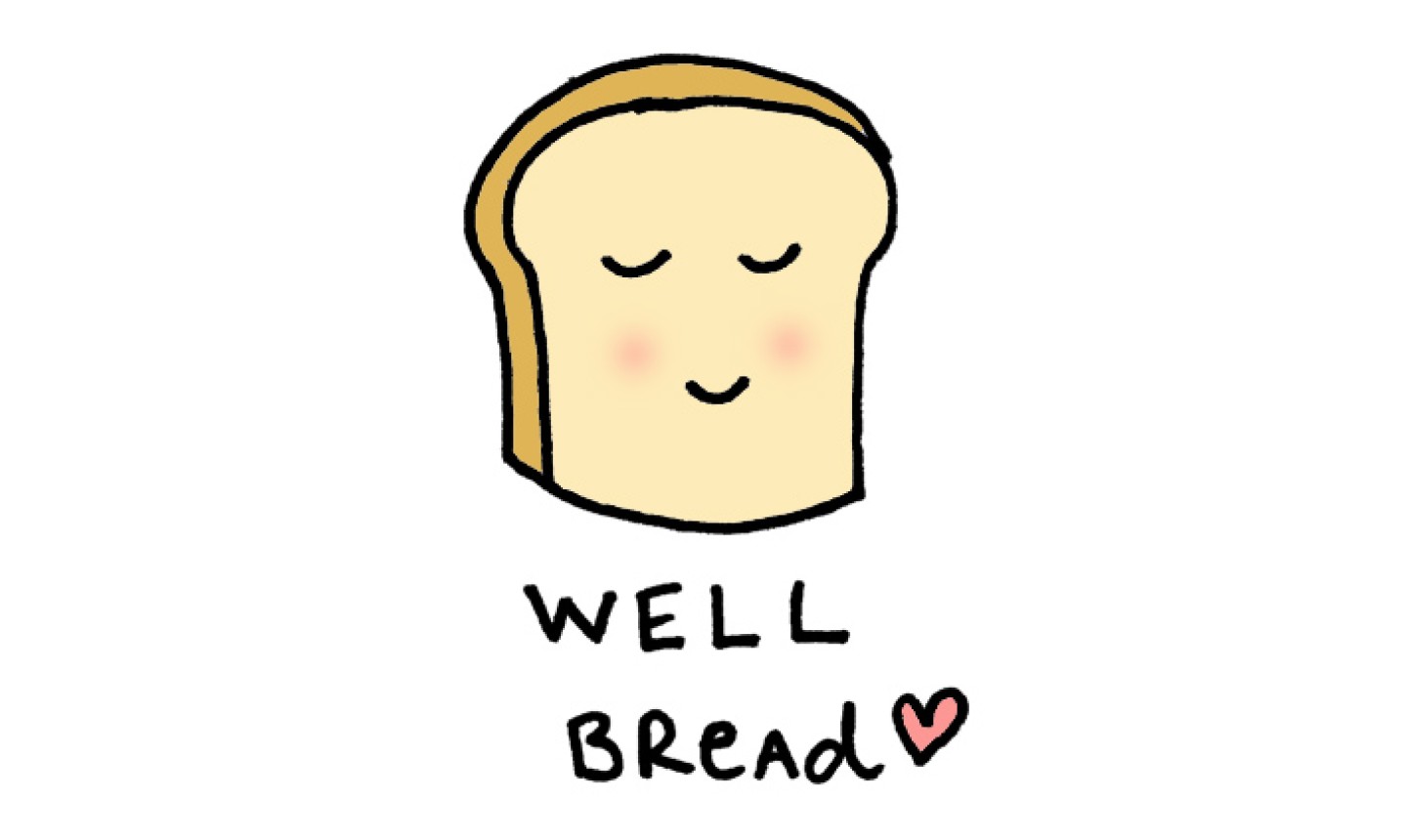 If you use a flour that has too low a protein count, it won’t react as needed to rise. However, super-high protein flours (whole-grain flours, for instance) can also make your bread heavier. Be sure to use an appropriate flour when making the recipe in question.

As you continue baking bread, you’ll learn more and more tricks and tips that will help you bake perfect loaves every time.

6 Responses to “Your Most Common Bread-Baking Problems — Solved!”