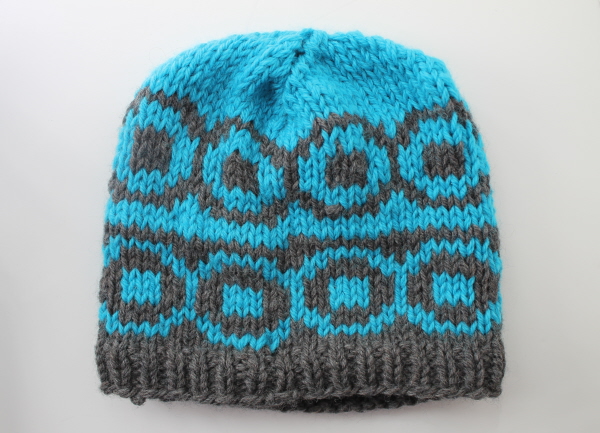 If you want your stranded colorwork to be as close to perfect as possible, you have to know how to navigate jogless knitting in the round.

Take a look at the hat pictured above. Notice how the colorwork doesn’t quite match up at the start of a new round? This is because when a new round was begun, the work moved in a spiral shape and caused the beginning and end of the round to stack. These are jogs, and they affect everything from the stripes to the circles in this hat. Jogless knitting eliminates those little steps that go from one round to the next; here are some methods to execute it perfectly.

Use it when: you’re knitting single-row stripes

You want to work carefully to avoid tangling your yarn, but this method creates stripes that are 100 percent jog-free.

2. Picking Up a Stitch

Use it when: you’re knitting two-color stripes

When you reach the end of each round, pick up a stitch in the row below and knit it together with the first stitch. This creates an elongated stitch, hiding that beginning-of-the-round jog.

Use it when: you’re knitting stripes in many different colors

On the round of your color change, knit the first round as you normally would. When you get to round two, slip the first stitch of the round purlwise (wyif), then knit the rest of the round.

When you look closely, you’ll be able to see the row where you slipped the stitch is slightly different. For example, if you’re knitting four-row stripes with the color blue, the spot where you slipped your blue stitch will only be three rows tall instead of four. It’s still inconsistent, but it will be much less noticeable than a jog.