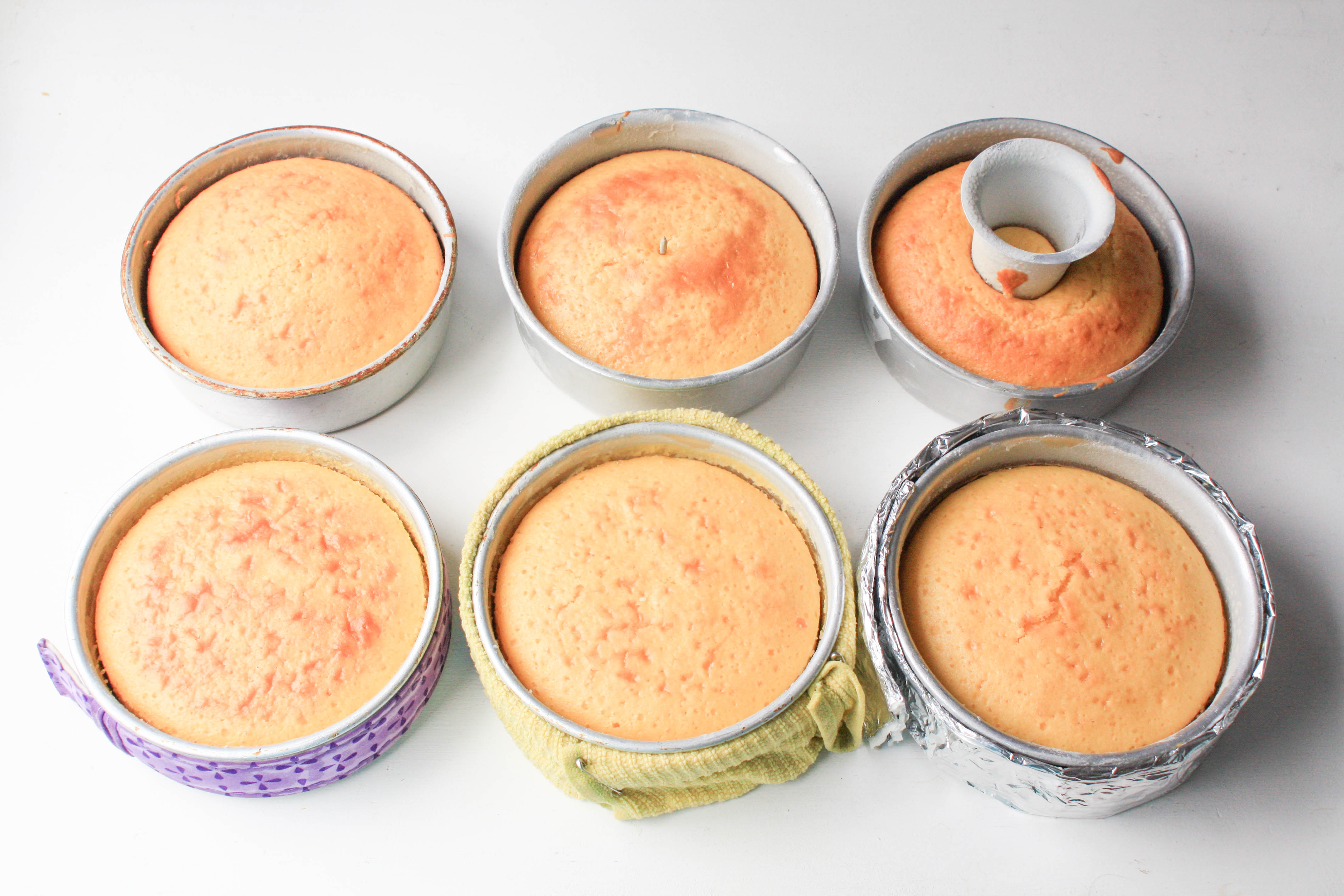 It’s one of the holy grails of baking — a cake flat and level straight from the oven. Bakers have quite a few tricks up their sleeves to achieve this feat. I put a few to the test and the results were surprising! 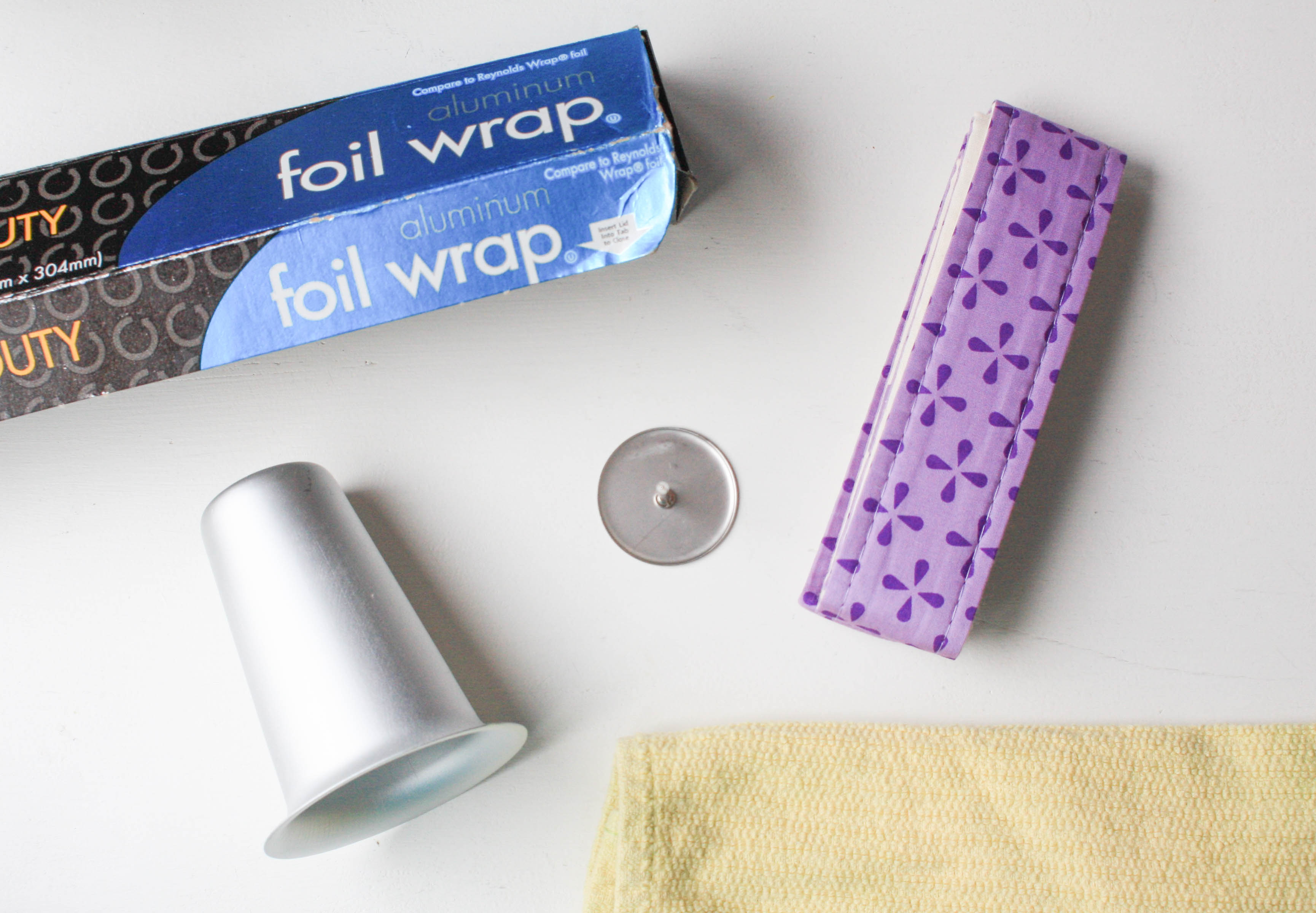 About 90 percent of the time I bake my cakes from scratch but, for this experiment, I didn’t want the recipe to be a factor. The mix companies have their stuff down cold, so one box is pretty much guaranteed to act like the next. I made three boxes of mix all in the same bowl at the same time.

No fiddling with the temperature

Here’s where I know I’m going to catch the most heat. Many, many bakers swear by baking lower and slower to achieve a flat baked cake. My experiment is specifically addressing the gadgets and gizmos people use to get their cakes to bake flat. Temperatures vary from oven to oven and from recipe to recipe. In my experience, a lower temperature combined with one of the following methods is typically the most successful way to go. Finding your temperature “sweet spot” is something you”ll have to work on with your own oven and recipe. (Usually somewhere between 300-325 degrees F.) 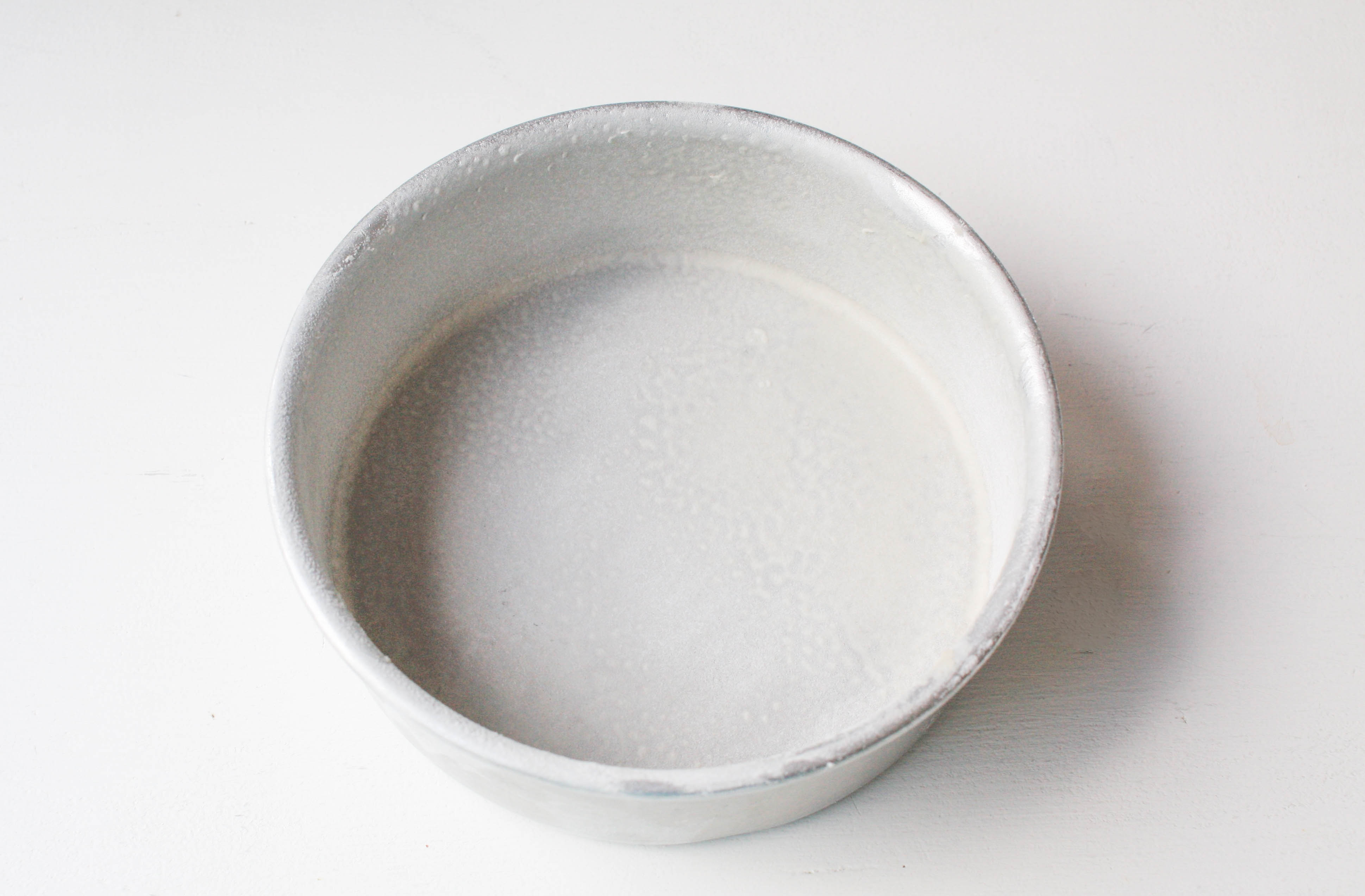 All pans are created equal

Each cake was baked in the same kind of pan, sprayed with pan spray, then dusted with flour. This is what I’ve found to be the most effective way to pre-treat pans. It’s also what’s recommended on the box. 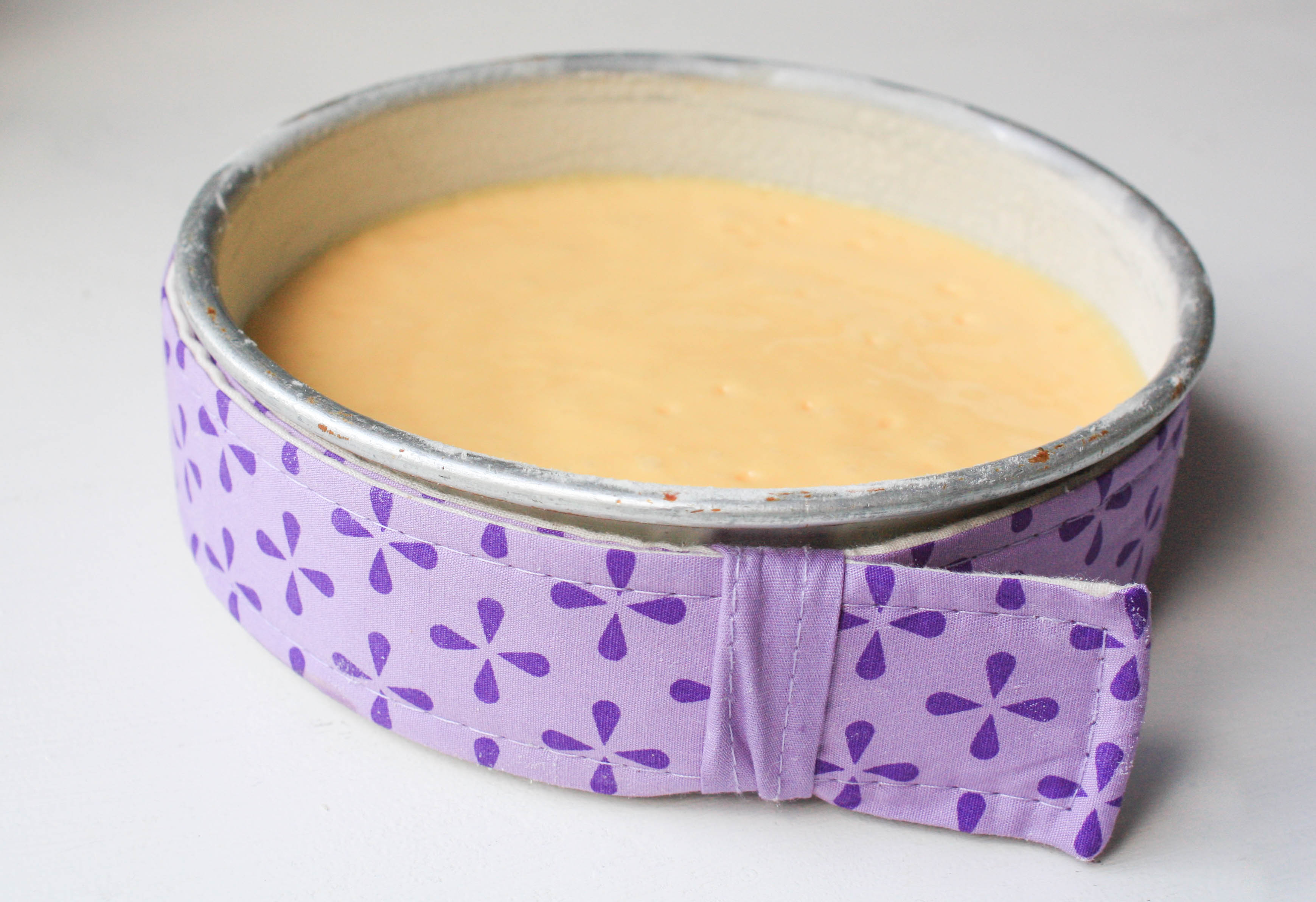 I purchased a small, 2-pack of strips at my local craft store for $9.99. The directions were clear and I found the strips fairly easy to use. I ran into a tiny issue when it came time to soak the strip — it floats! I remedied this by placing a plate on top of it to keep it submerged in cold water. It helps to fit the strip to the pan before you fill it with batter. Otherwise, you might spill some while fiddling with the loops to tighten the strip. I felt like there could have been a smoother method for keeping the strip on the pan. Maybe magnets? Clips? 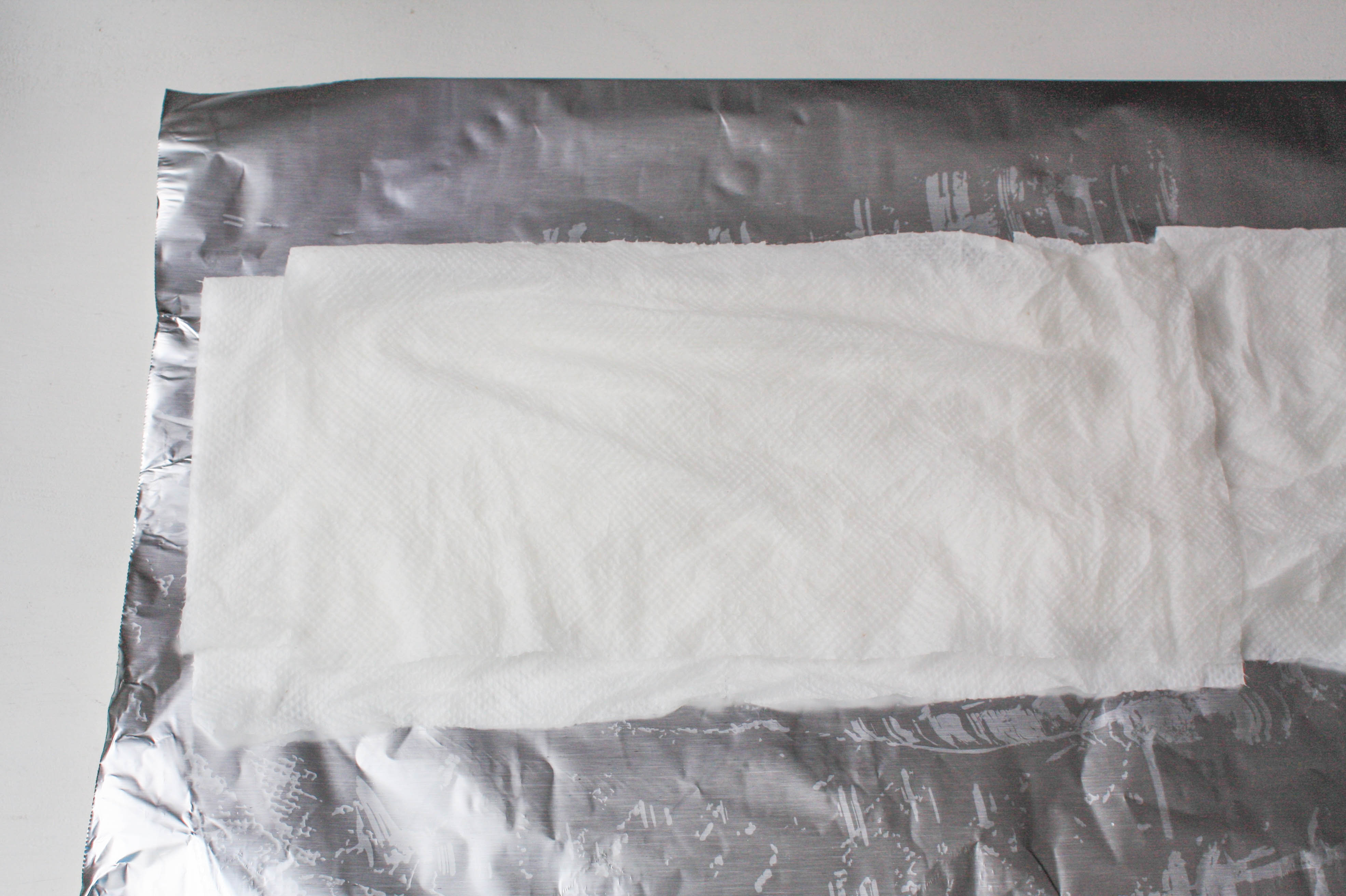 Soak paper towels in cold water and wring them out just a little. Lay the paper towels on a piece of heavy-duty aluminum foil and fold the foil up and over the wet towels into a long strip. Wrap the pan with the strip and pinch the edges of the foil together to secure. 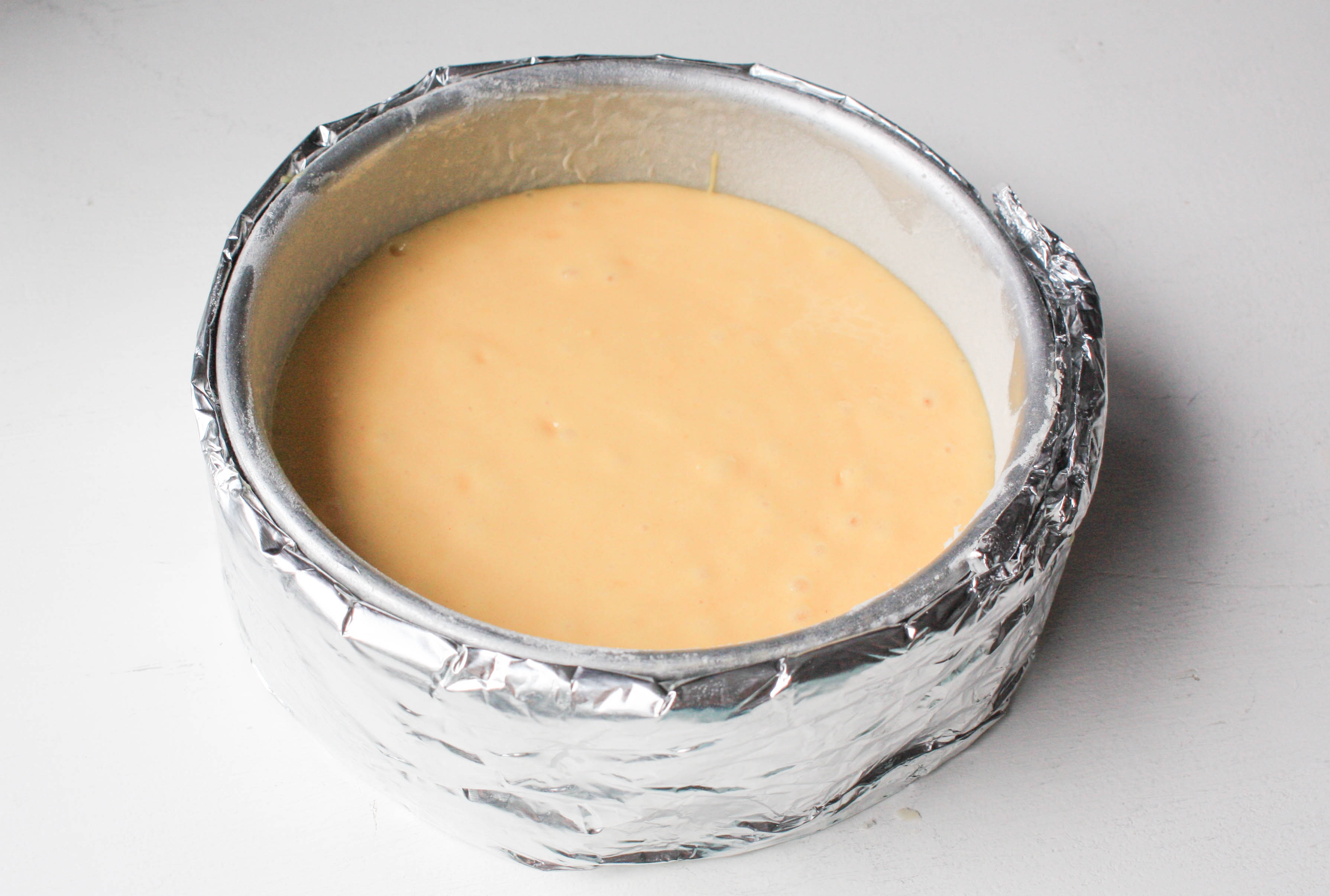 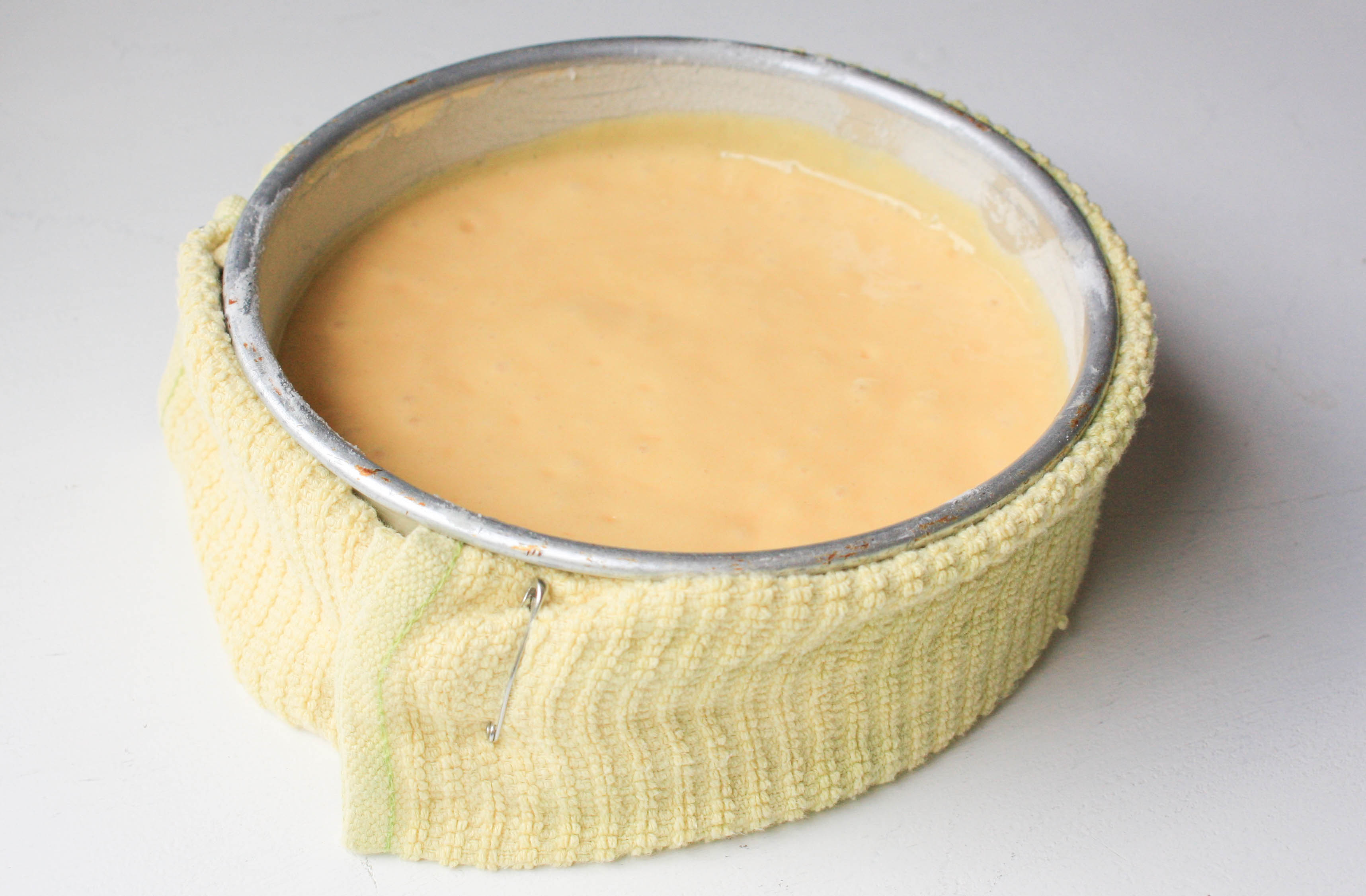 Cut an old towel into strips, soak for 5 minutes in cold water, then pin the strip in place around the sides of the pan. Pinning the towels wasn’t the easiest thing to do. If you plan on using the towels frequently, it might benefit you to break out the sewing machine.

These work on the theory that placing something metal into the center of the pan while the cake is baking will hep distribute the heat more evenly and prevent doming. 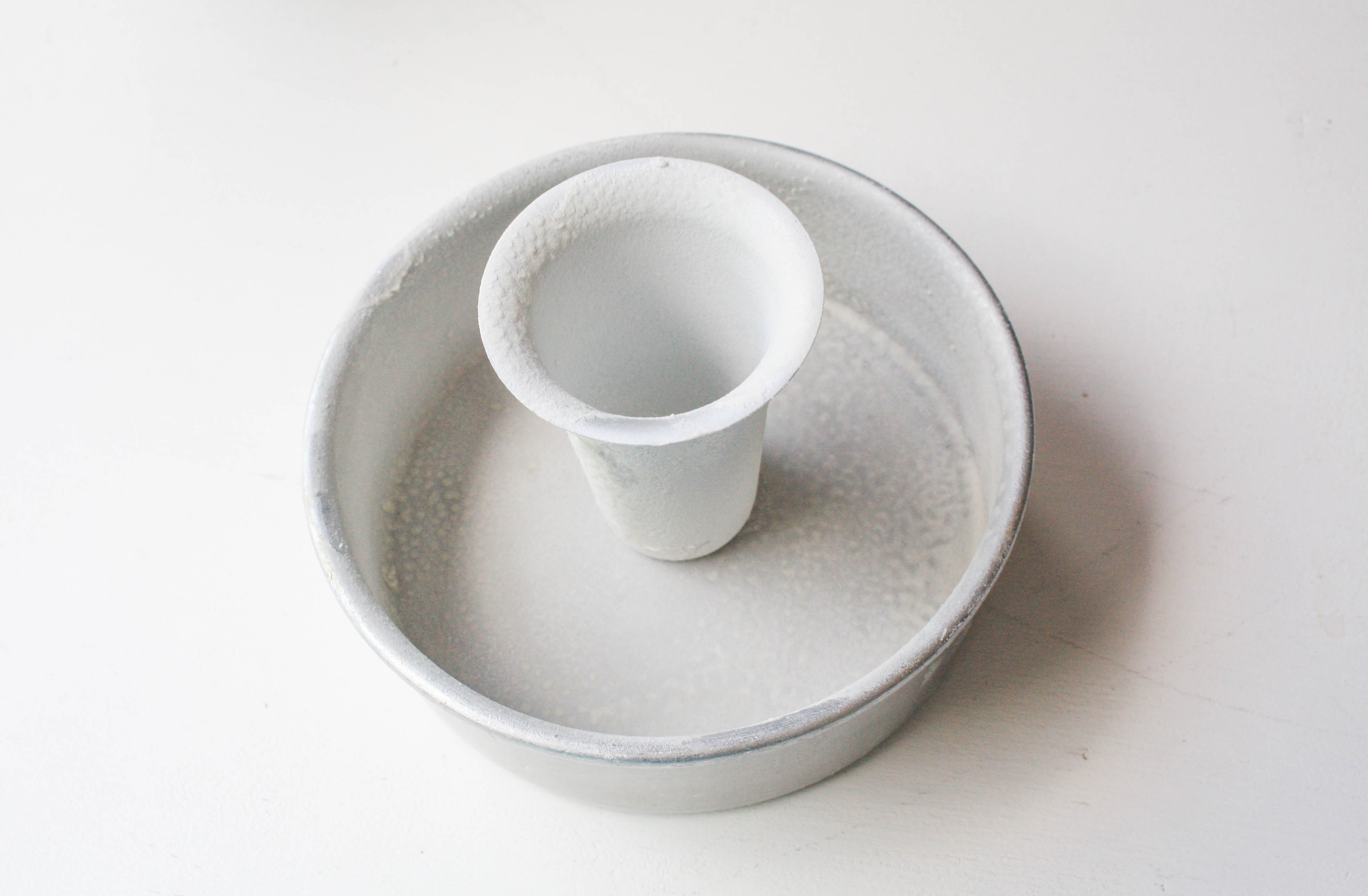 I purchased one heating core at my local craft store for $9.99. This method would get pricey if you need to bake lots of cakes at once. I also realized after purchasing it that it is best used when baking larger cakes, but decided to give it a whirl anyway. The core needs to be sprayed and floured, just like the pan. Place it in the center of the pan and fill it with batter level to the batter in the pan. 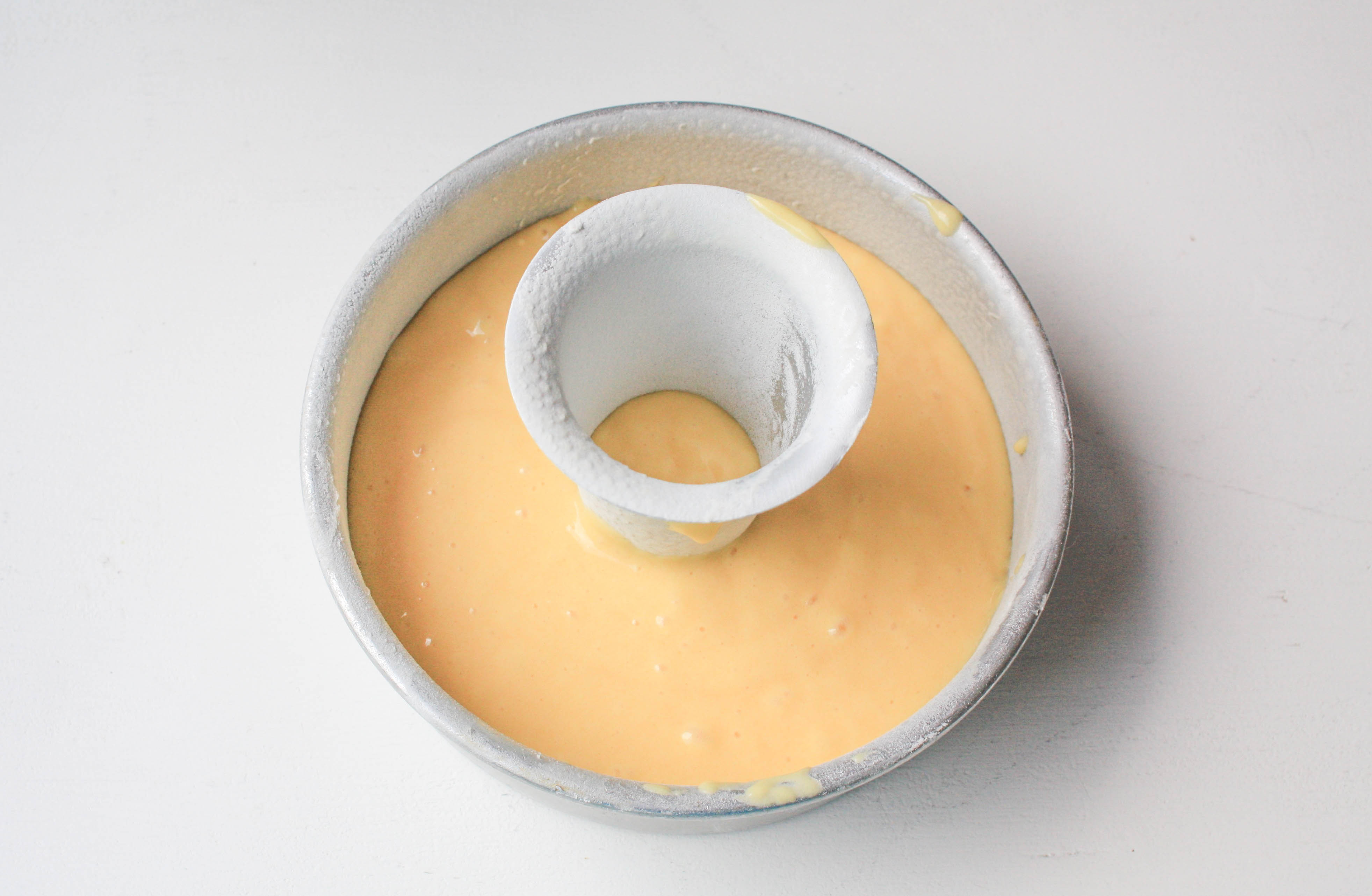 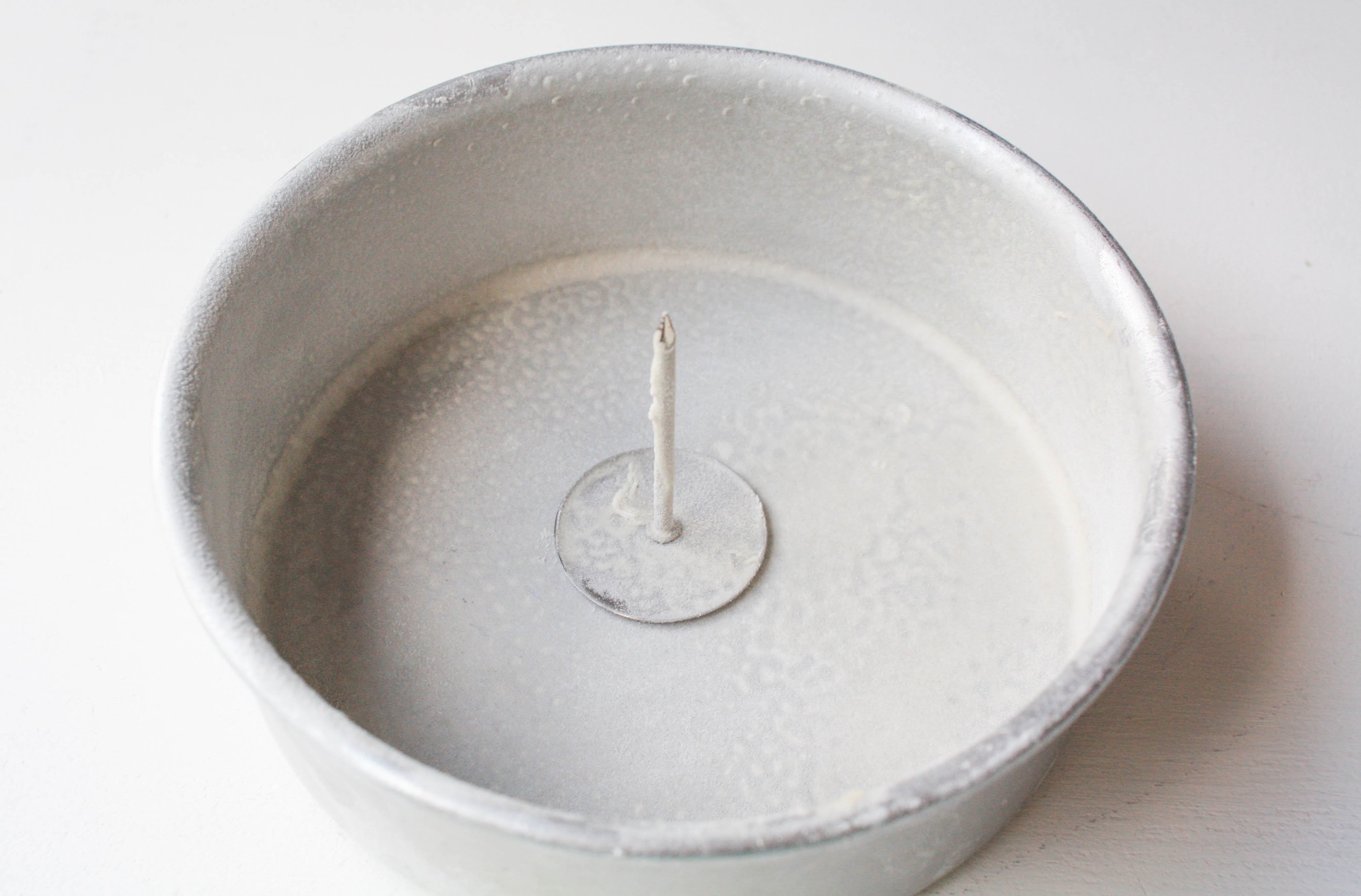 I had one of these already on hand. They typically run $1-2 at the craft store. Spray and flour the nail just like the pan. Place the flat side down in the center of the pan and fill with batter. 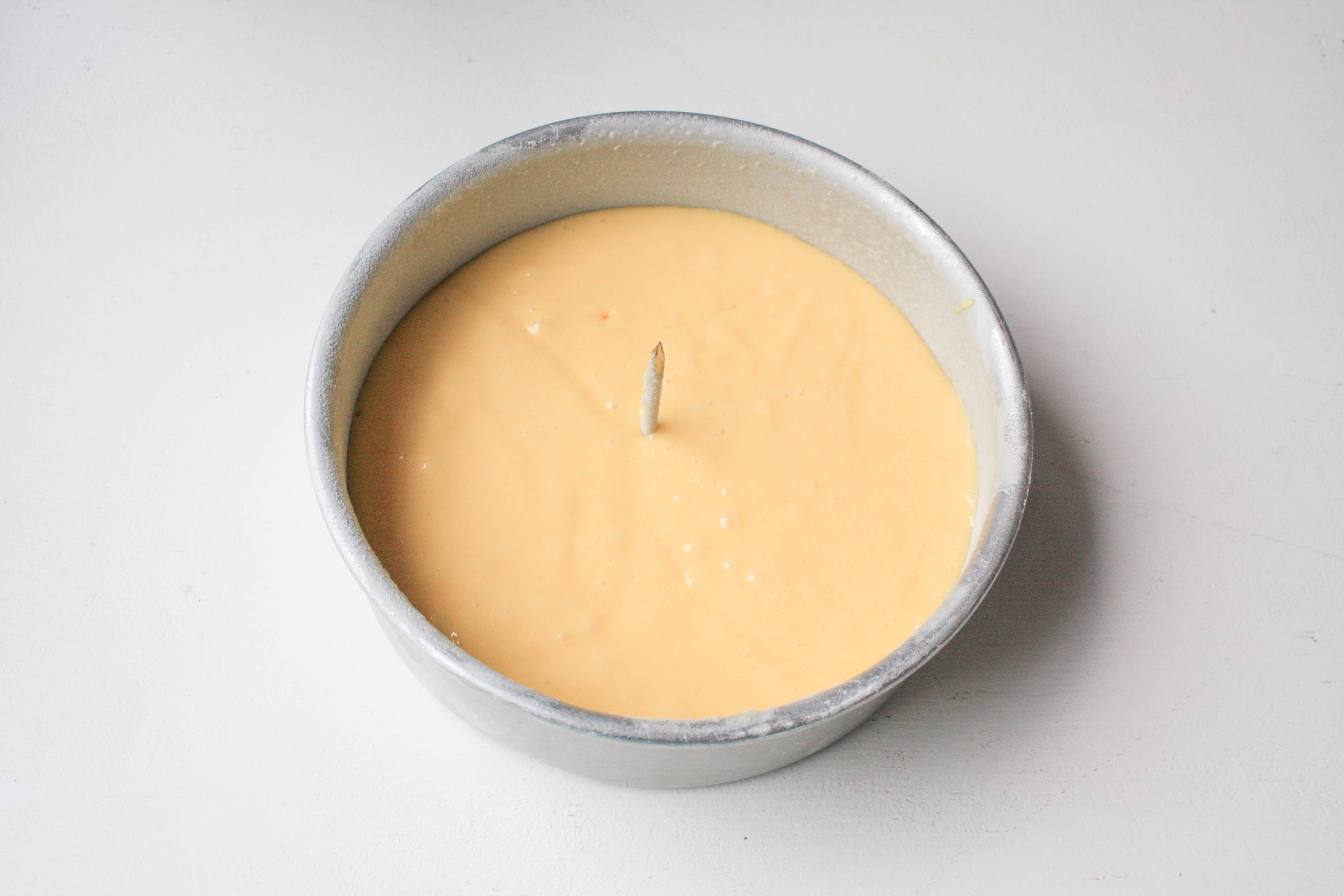 Compared to an untreated control cake.

Wilton Bake-Strips and plain old dish towels were the clear winners! Both had flat, level tops. An unexpected bonus – the cakes baked with the same color all the way through without any dark edges.

Foil and paper towels were outperformed by the other strip methods. Wilton Strips and towels were both easier to use and reusable.

The floral nail was my biggest surprise! I know many bakers swear by this method, but it did nothing for me. I was SO surprised that I baked a second cake to see if there was any difference. None. If a flat cake is what you’re after, the external methods all seemed to be a better bet.

Heating core. Hmph. I know, I know, it’s meant for larger cakes. Even when used exactly as intended, I still find fault with this method. I split most of my cakes and don’t want to have to deal with little bits of cake floating around. I also don’t like how the holes left behind by the core create instability where dowels would likely go in a tiered cake. For my $9.99, I’d rather pick up a pack of strips and call it a day.

2 Responses to “How to Bake a Flat Cake: 5 Methods Put to the Test!”