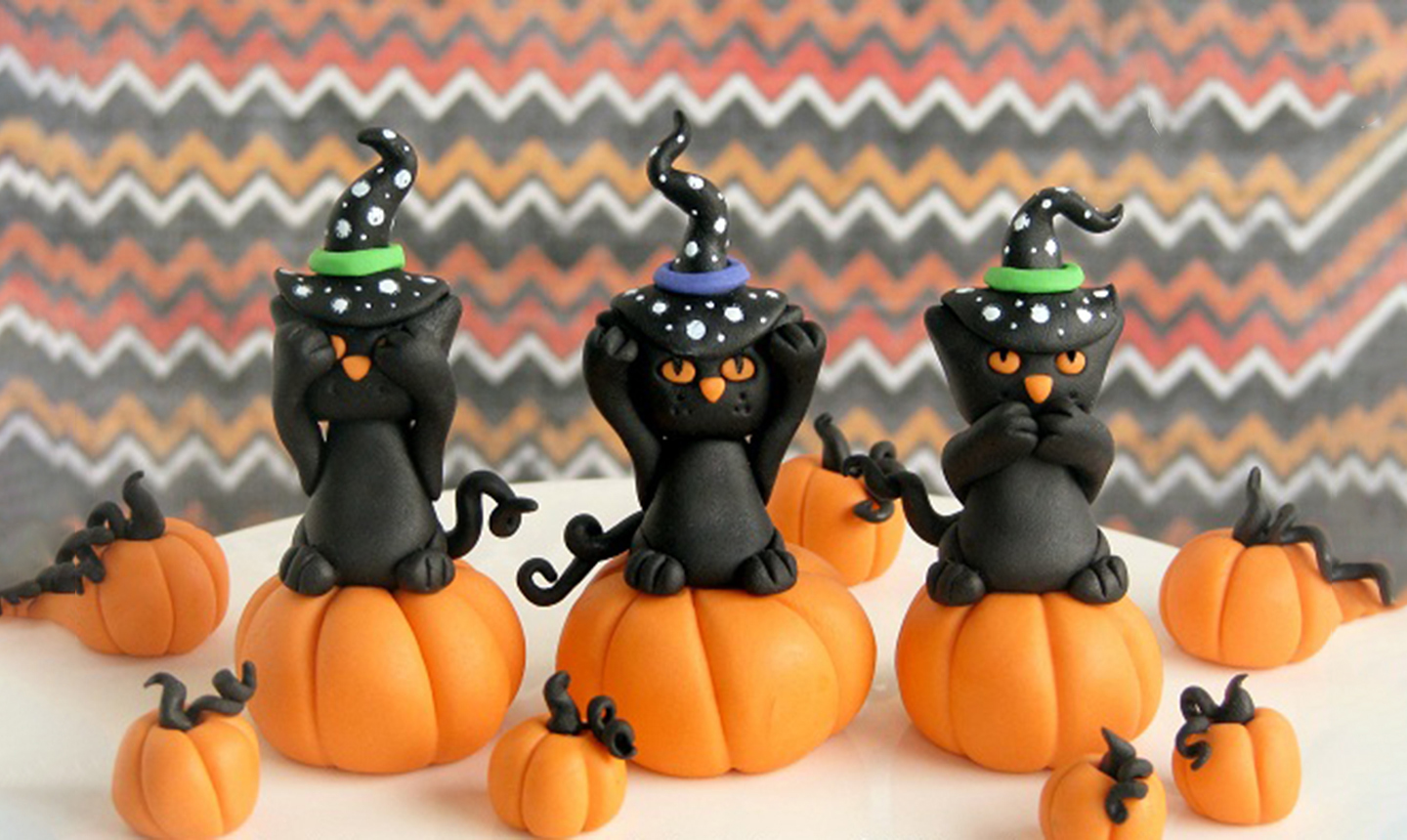 Every witch needs a familiar, so why not make one out of fondant? Kick off the spooky season with these scarily superstitious Halloween cake toppers. 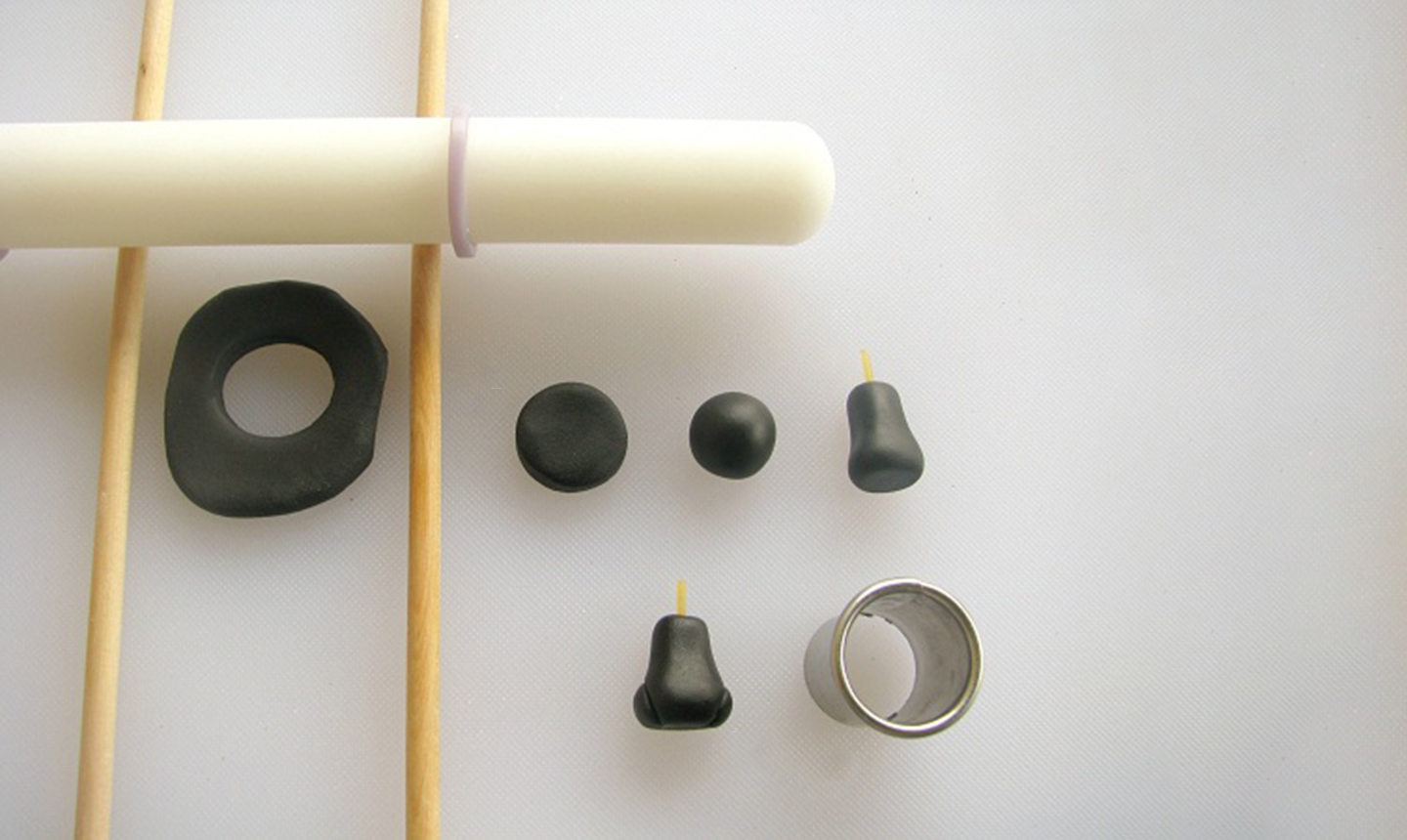 Roll black fondant until it’s ¼” thick, using the wooden dowels as a guide. Cut out a ⅞” circle with the round cuter and roll it into a ball.

Use your fingers to shape the ball into an hourglass shape, with one side wider than the other. Insert a piece of raw spaghetti through its center, leaving just enough to protrude through the top (the smaller end) and hold the head. Using the round cutter, indent the two sides of the hourglass’ wider end to create the cat’s hind legs. 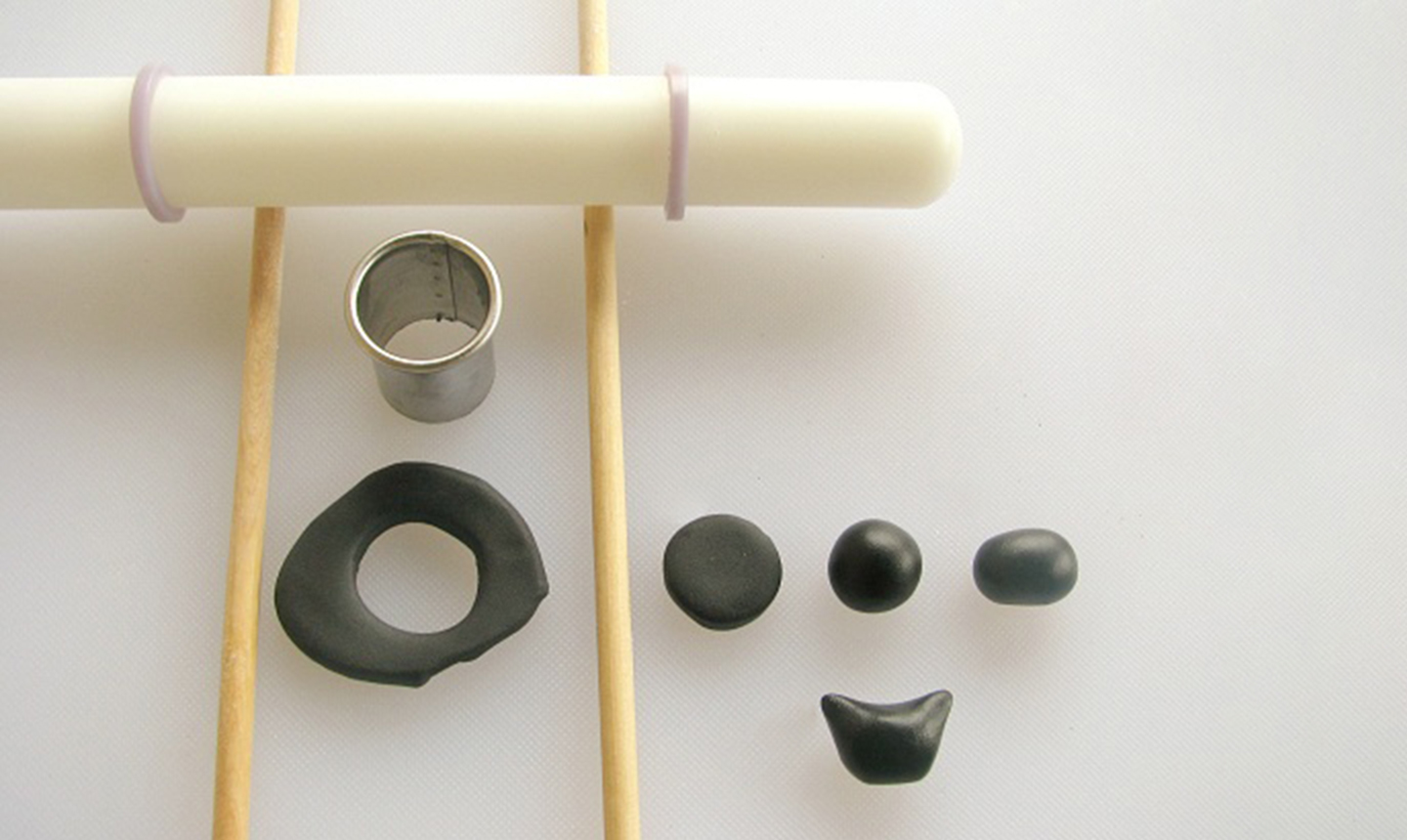 Roll more black fondant until it’s ¼” thick, again using the wooden dowels as a guide. Cut out another ⅞” circle with the round cuter. Roll the fondant in your hands to form an oval, then pinch the ends of the oval to form the cat’s ears. Use your fingers to shape them and round out the face as needed.

3. Add Details to the Face 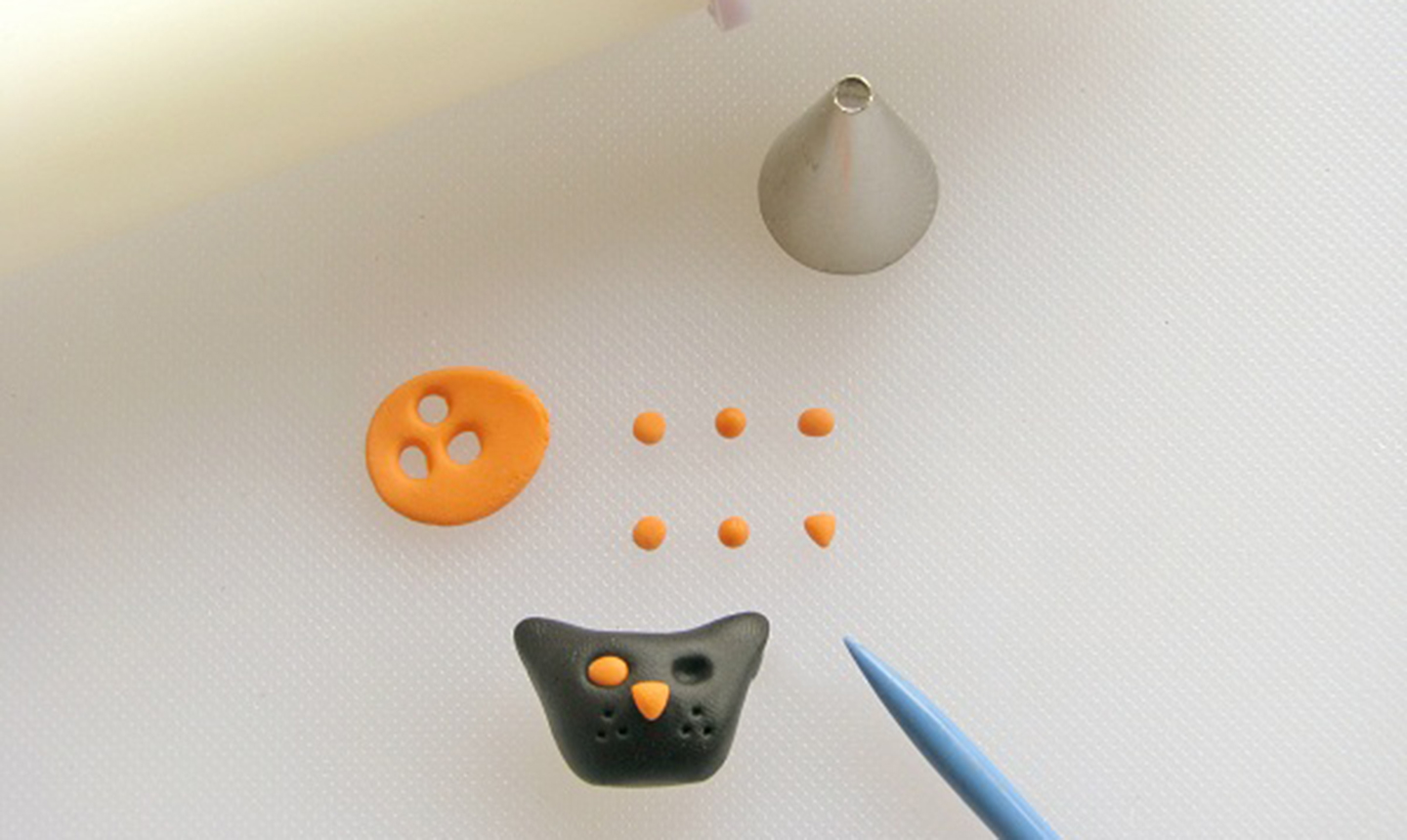 With the modeling tool, make two oval indents for the cat’s eyes. Roll out orange fondant until it’s ⅛” thick and cut out three small circles with round piping tip #5. Roll two of the circles into ovals and secure them into the eye indents with edible glue.

Shape the remaining circle into a triangle to form the cat’s nose. Glue it to the center of the face, then use the small modeling stick to make whisker dots on each side of the nose.

Add glue to the bottom of the cat’s head and insert it over the protruding raw spaghetti, securing the head to the body. 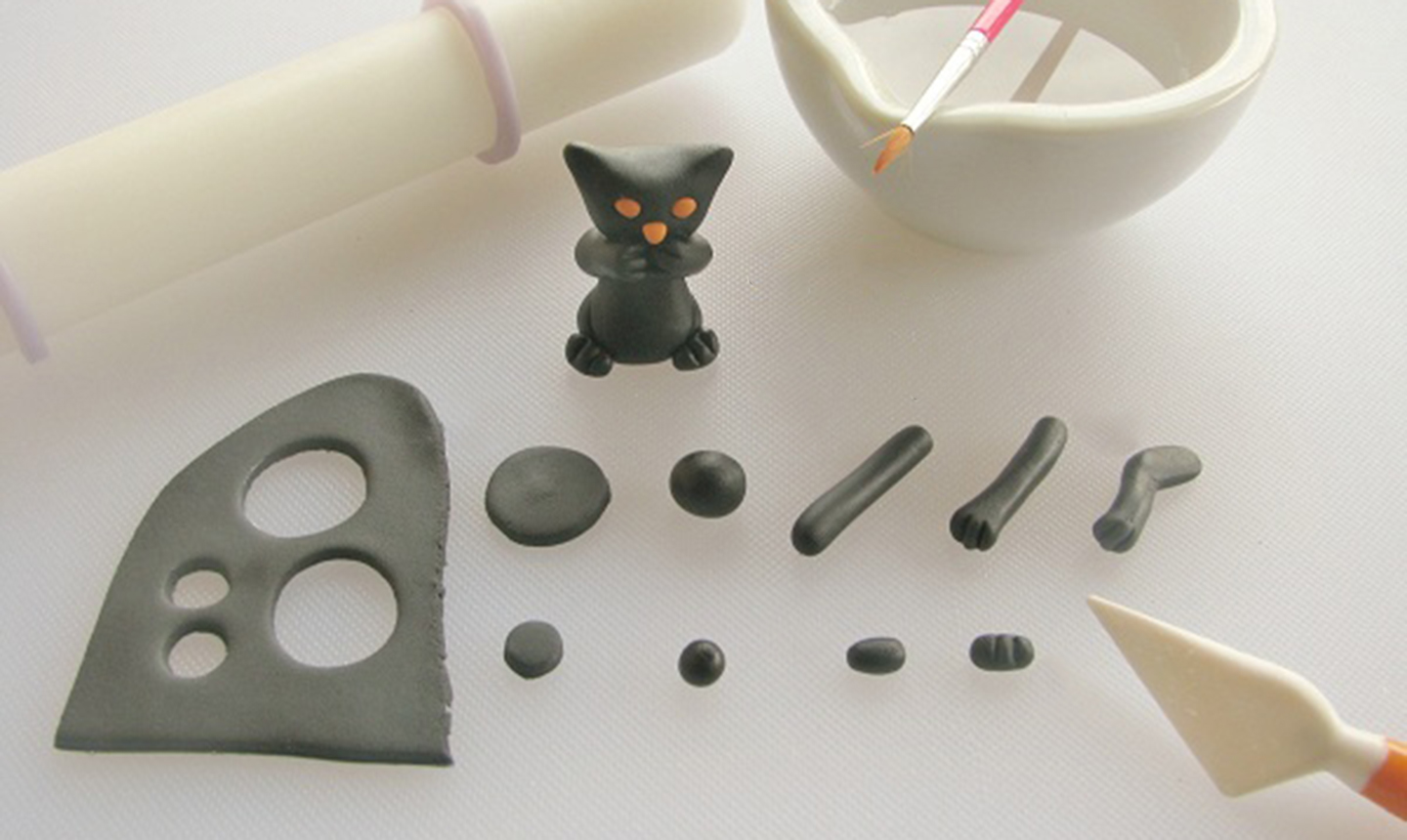 Roll the two larger circles into balls, then roll them onto your work surface to form legs. Use the knife tool to make two indents at one end of each limb to create paws. Form the limbs around the cat’s body in your desired position (see no evil, hear no evil, speak no evil) and glue them into place.

Roll the two smaller circles into balls and shape them into ovals. Use the knife tool to make two indents in each oval to form paws and flue them to the bottom of the cat, near the hind leg indents you made in step 1.

5. Make the Hat and Tail 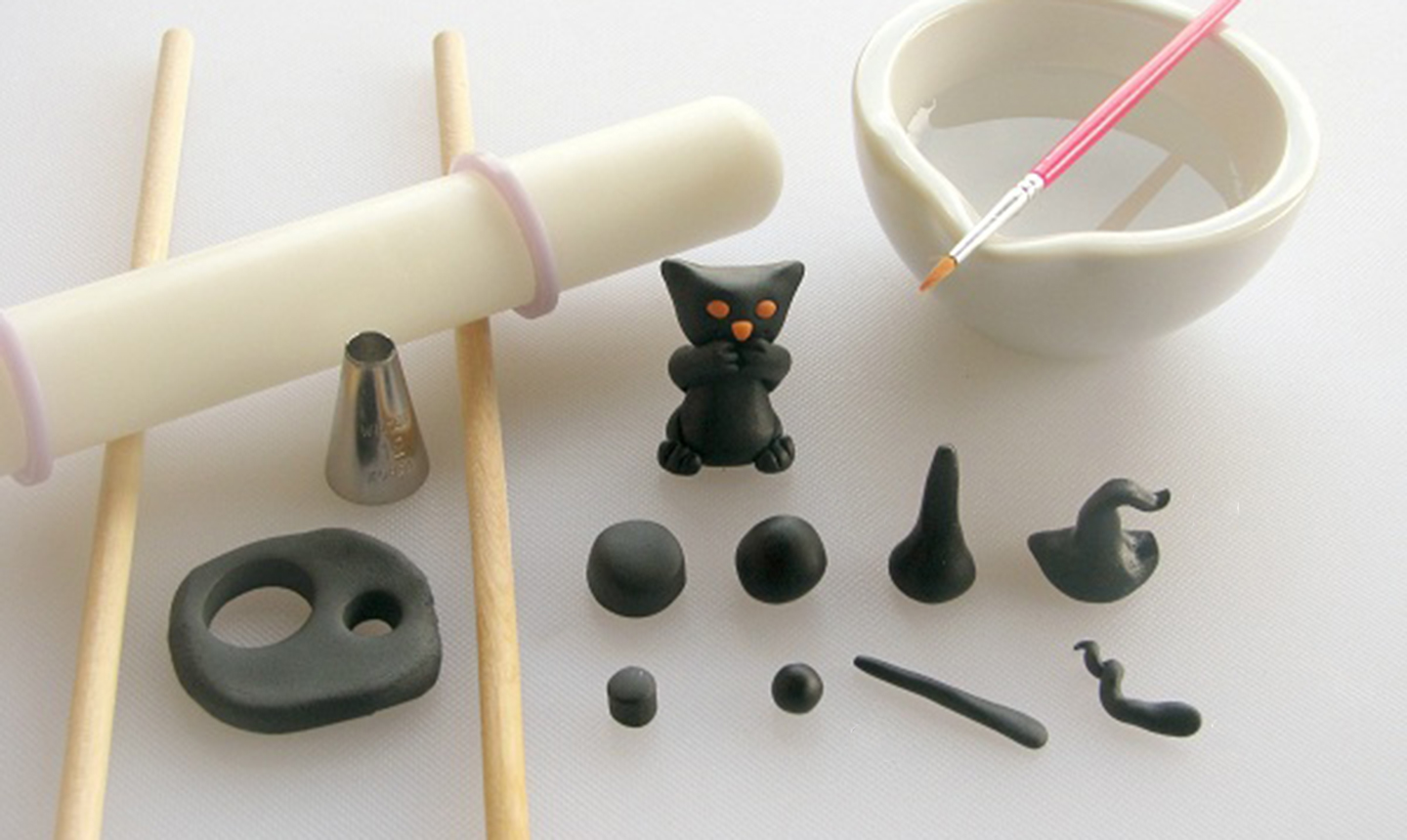 Roll black fondant until it’s ¼” thick, using the wooden dowels as a guide. Cut out a ⅞” circle with the round cutter and a small circle with round tip #12.

Roll the larger circle into a ball, then shape it into a cone to make the witch hat. Mold the tip into a narrow, swirly shape. Use your fingers to flatten the cone’s base and shape the brim of the hat. Form it to the cat’s head and glue it in place.

Roll the small fondant circle into a ball, then roll it into a snake-like shape to form the tail. Flatten one end and shape the other into your desired position. (You could give him a crook in his tail, for example.) Let it dry a bit so it’ll hold its shape, then glue the flat end to the back of the cat. 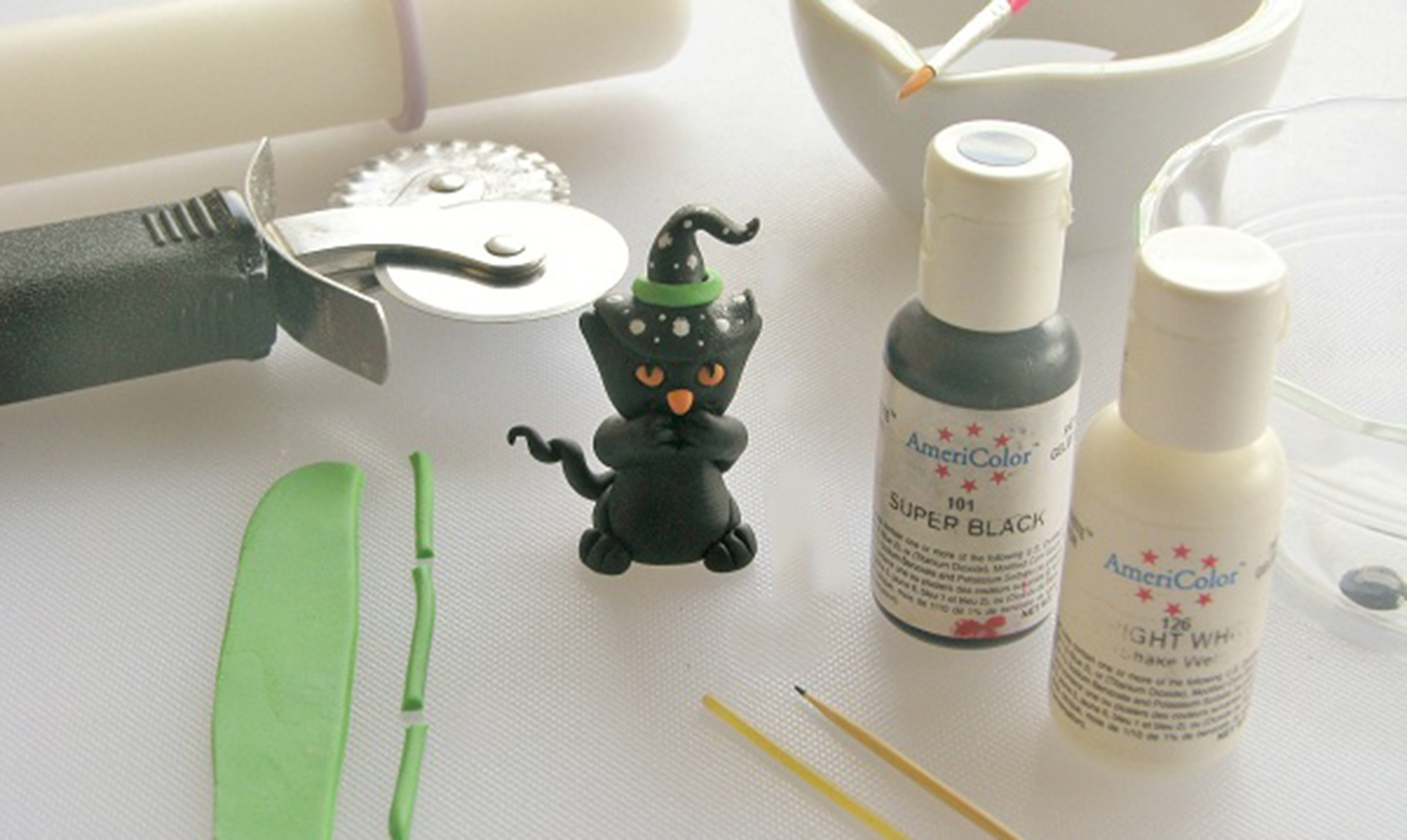 Roll green or purple fondant until it’s ⅛” thick and use the pastry cutter to cut out a thin strip. Wrap it around the hat, cut it to size and glue in place.

Pro Tip: To make dots of different sizes, use the excess raw spaghetti to paint the hat as well. 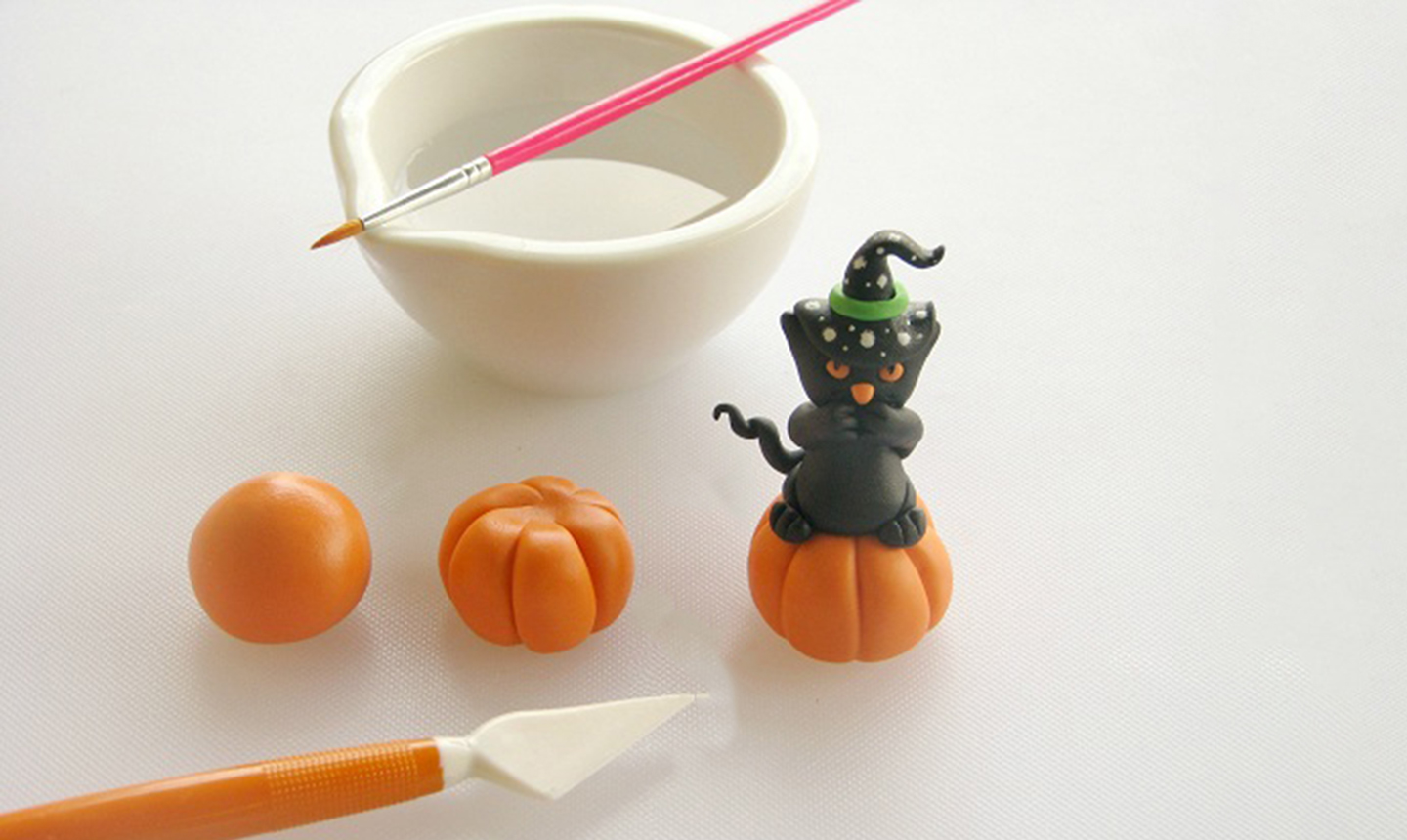 Roll a piece of orange fondant into a ball, then use the knife tool to indent the sides to create a pumpkin. Indent the top of the pumpkin with your finger so it’s flat, then glue the cat to the center.

Once the topper is dry, put it on top of your cupcake. Or make a whole bunch to rest on a cake!