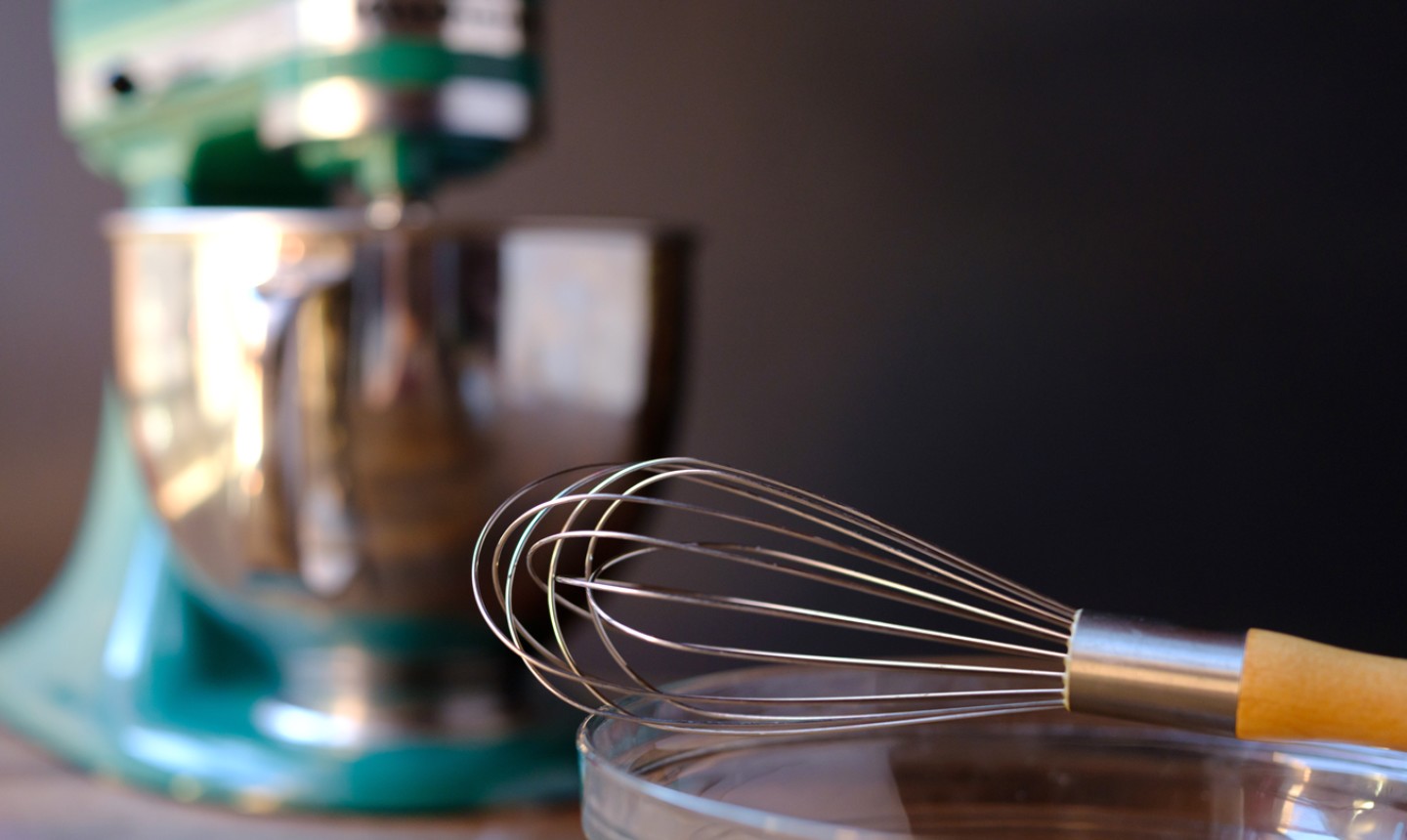 Balloon, ball, spiral, cage, coil. No, this isn’t “I Spy” at the circus. We’re talking about different types of whisks and which is best for which type of cooking or baking project.

But first, some whisk history! A recipe from The Best of Shaker Cooking, possibly dating back to the 18th century, asks the baker to “cut a handful of peach twigs, which are filled with sap at the season of the year. Clip the ends and bruise them and beat cake batter with them. This will impart a delicate peach flavor to the cake.” I guess that’s one way to do it!

America didn’t really know much about wire whisks until Julia Child came along. She featured one during the pilot of her television show “The French Chef,” using it to prepare an omelet.

“Before Julia, we used that little egg beater — the one that you wind up — or a fork to beat egg whites,” writes famed chef Alice Waters in an article in The New York Times. (By the way, Julia Child called her tool a “whip,” which has a certain ring to it.)

You might be surprised by the variety of specialized whisks (or whips!) available. Here’s how to find the right ones for your kitchen.

The most popular style, these are usually (but not always) made up of metal loops of varying sizes and thicknesses. Some wire whisks are more flexible, others are sturdier.

Made with firm but flexible pieces of wood (usually birch), these are best for light whipping, mainly for baking.

These are wire whisks coated with heatproof silicone. They are a great choice for non-stick pans because they won’t scratch the protective coating, and their non-stick surface can make cleanup easier. 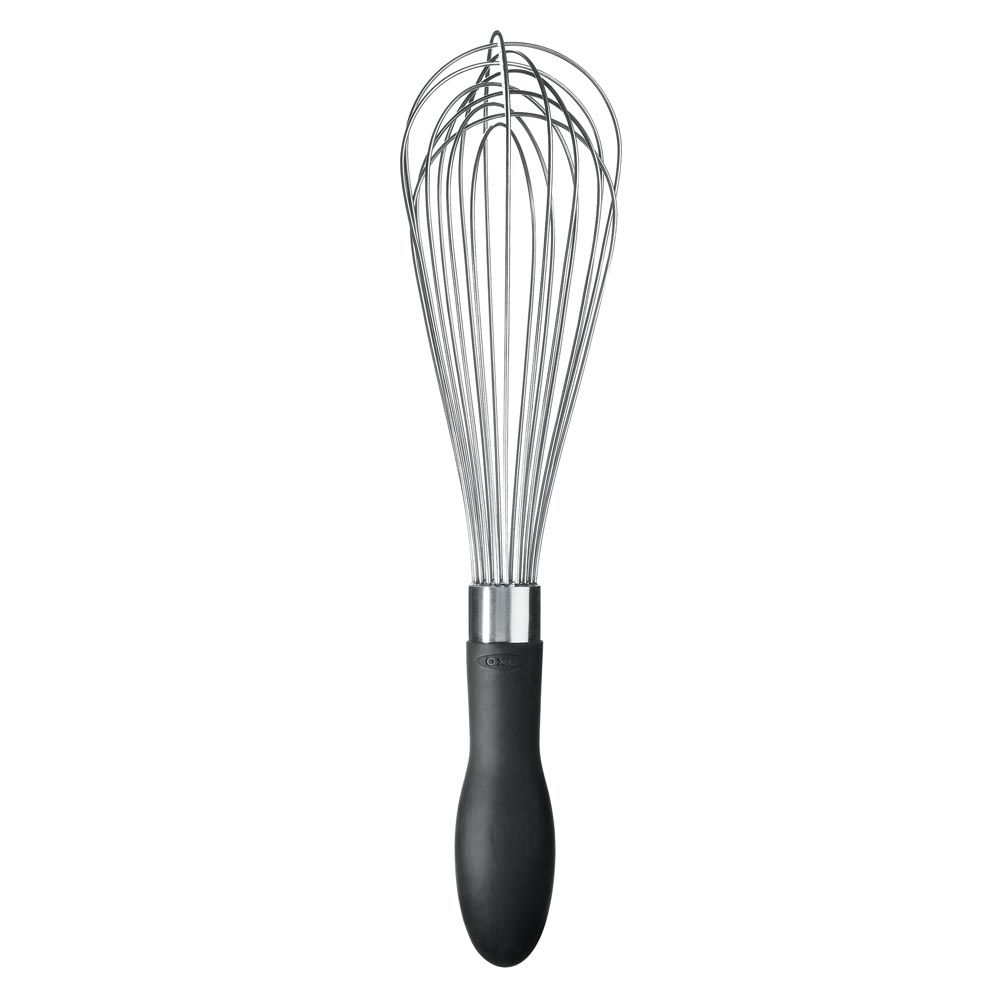 This is one of the most popular types of whisks. The “balloon” is made from a series of flexible wires (usually eight or more) which join at an end which is attached to a handle. Balloon whisks come in a number of sizes, from teeny tiny to almost cartoonishly large.

Suggested uses: The uses for a balloon whisk are many, and include but are not limited to mixing eggs, vigorously whisking air into egg whites or cream to create meringues or whipped cream, lightly mixing together dry ingredients in lieu of sifting. 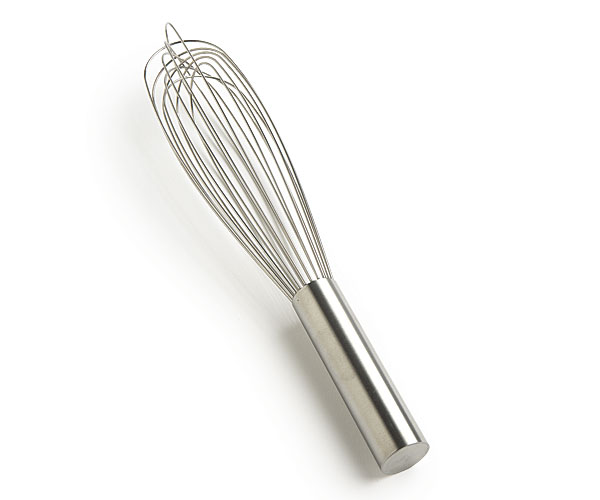 This is the other most famous whisk in the world of kitchen supplies. Like its balloon whisk brother, the French whisk is composed of a series of overlapping flexible wires which join together at a handle. Its shape is different than a balloon whisk, however: it is longer and narrower.

Suggested uses: Like the balloon whisk, this is an all-purpose tool. Whisks with more flexible wires are best suited to liquids, whereas more sturdy wires are better suited to thicker sauces or custard type mixtures. Its narrow profile allows this whisk to better scrape the edges of pans, so it is a favored tool for mixing sauces or ingredients which are being combined in a deep pan. 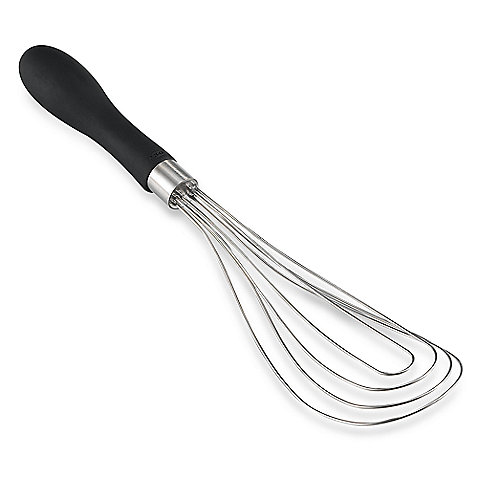 Photo via Bed, Bath & Beyond

Also commonly called a roux whisk. Visually, it looks like a balloon or French whisk that has been flattened–it has the signature loops that you’d expect in a whisk, but fewer, and they lie flat. This orientation makes it uniquely suited to stirring in shallow pans such skillets.

Suggested uses: Owing to its harmonious nature with skillets, this whisk is a great choice for making a roux or various pan sauces. 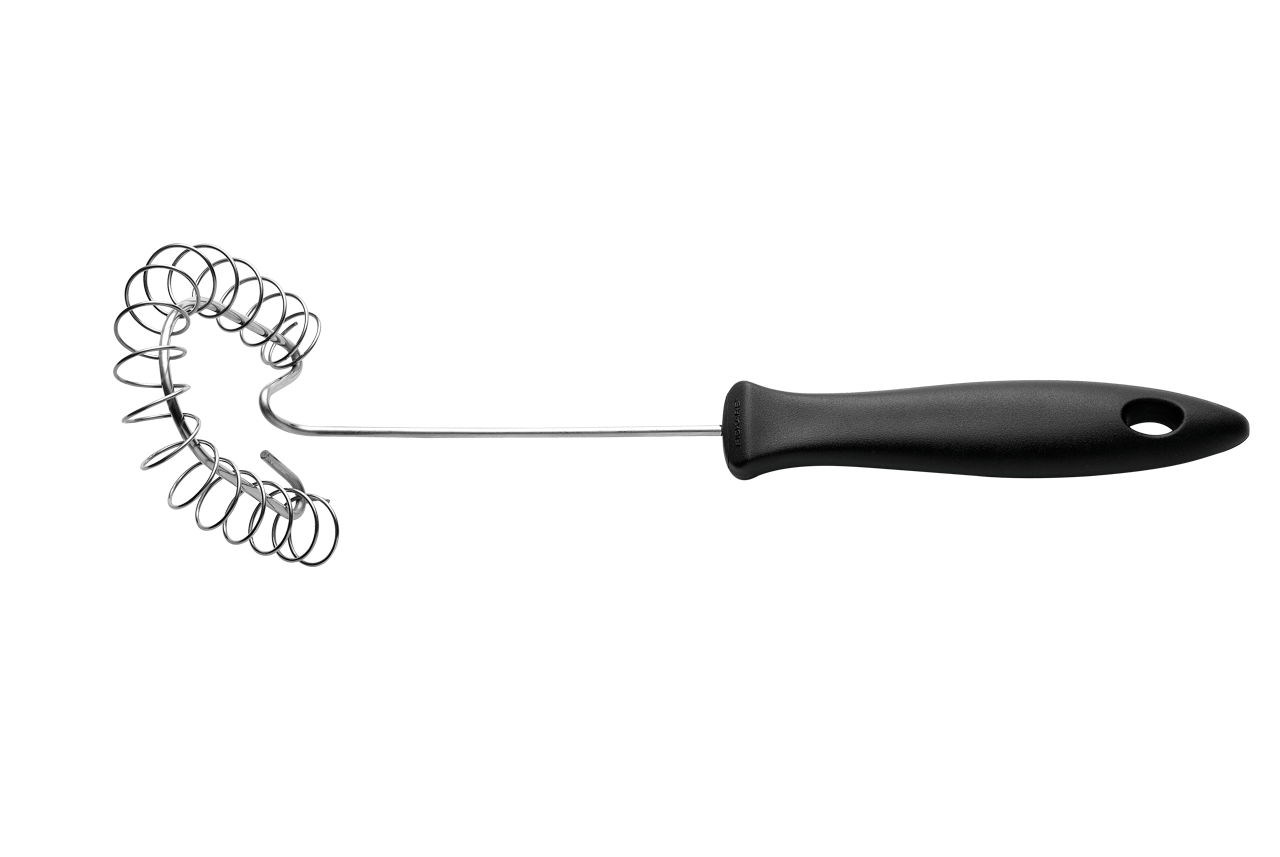 This unique-looking whisk consists of a rounded loop, around which another wire is coiled around. The head is slightly angled. Since the head bends to fit the space it is inserted into, this type of coil whisk will constantly make contact with the pan or bowl, which helps to ensure even mixing while preventing scorching.

Suggested uses: This whisk is well-suited for mixing sauces (from mother sauces to pan sauces and variations), vinaigrettes, or for incorporating liquid into a roux while reducing any possible lumps.

There are no loops on this unique whisk, which looks more like a retro lighting fixture than a kitchen tool. Instead, it consists of a series of individual wires which starburst out from a handle and each have a ball bearing on the end. The lack of loops makes it easier to clean, and proponents of this type of whisk claim it allows for quicker and better aeration of the substance being whisked.

Suggested uses: The speed with which the ball whisk aerates makes it a favored choice for whipping egg whites, making for perfect meringues. 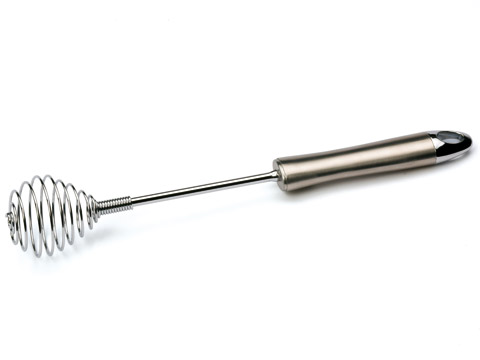 Photo via Peter’s of Kensington

This type of whisk is characterized by its one single wire which spirals into a round shape. The overall shape is like that of a balloon whisk, but it is one single wire rather than a series of wires looping. Unlike other whisks, which are stirred around the bowl to aerate liquids, this type remains stationary in the bowl and is pumped up and down. Not to confuse things, but sometimes this is also called a spiral whisk, too.

Suggested uses: Incorporating liquid ingredients, especially in a deep vessel; great for lifting sauces or thick mixtures from the bottom of a pan. 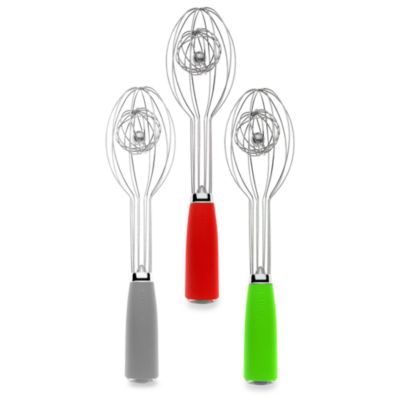 Photo via Bed, Bath & Beyond

This unusual whisk looks like a balloon whisk which has been stuffed with a small ball-shaped wire “cage” consisting of more looped wires. Inside of the cage is a ball bearing for weight. The added muscle of that inner “cage” allows for thorough blending of thick mixtures, ensuring a smooth, silky texture.

Suggested uses: This whisk is especially popular for whipping cream, and with good reason: whipped cream was never so luxuriant as when whipped with a cage whisk. 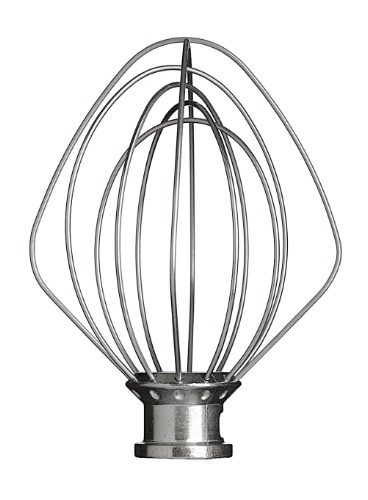 There is also a whisk attachment for stand mixers. This attachment most closely resembles a balloon whisk in its shape, and can be attached to the head of a stand mixer and then used for any of the purposes called for with whisking.

Suggested uses: The attachment is especially helpful when vigorous whisking is required, such as whipping egg whites for meringues or heavy cream for whipped cream. Not suggested for batter or dough, as they can warp the wires.

How many whisks do you own?