The shawl has become a near ubiquitous staple in the knitter’s repertoire. After much dithering over whether I’d really wear such a thing, I fell headfirst into shawl mania, designing and knitting a plethora of warm and cuddly wraps that I now wear nearly constantly. My preferred method is knitting top-down because I’m impatient — a shawl grows quickly when you start from a small nub.

There are a lot of possible shapes a top-down shawl can take, and all of them are controlled by two main factors: rate of increase and placement of increases.

In the following post, I’ll discuss some of the most typical ways that top-down shawls are shaped, as well as some less common possibilities. 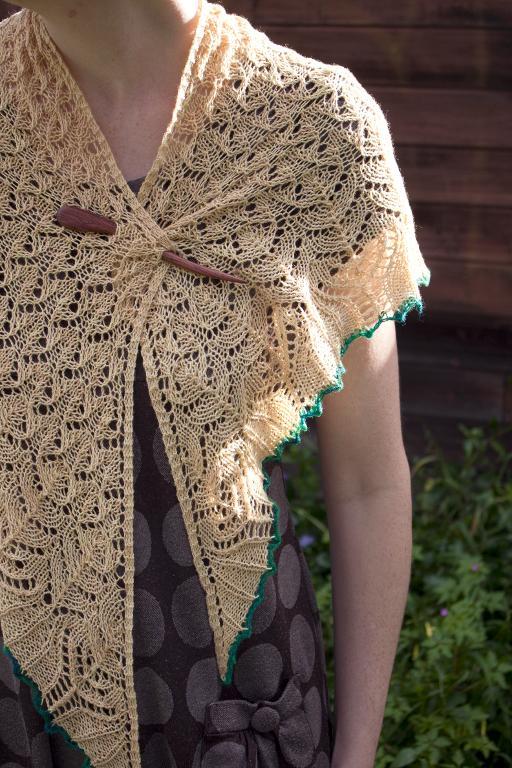 All of the tiny sample shawls that I knit started the same way, with a garter tab cast on, and grew outward though the placement of increases. I used yarn overs for all of my increases to make them easy to see, but any increase method of your choice will work just fine. 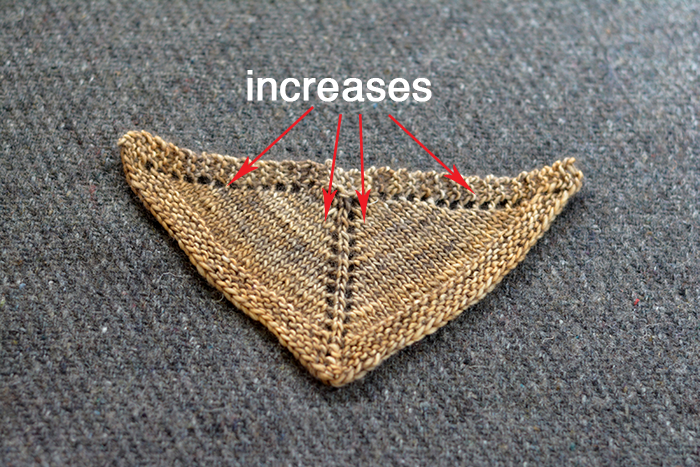 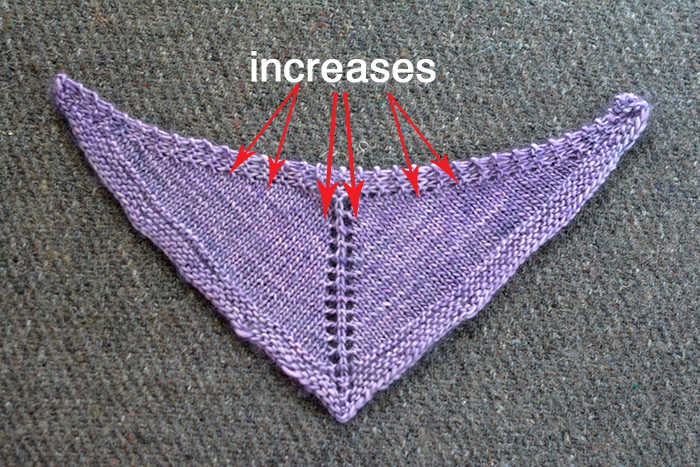 Both of these two triangles were knit using the same yarn base, on the same needles, and with the same number of rows, but the purple triangle is twice as wide as the brown one.

Knitting a wider, shallower triangle can be great for those times when you’re worried about yardage. Because more of your yarn goes to width rather than length, it will take fewer rows and fewer stitches to end up with something wide enough to wear as a wrap.

The two triangles above demonstrated how much of an impact rate of increase has on your shawl growth.

Now let’s take a look at what happens when we play with the placement of the increases: 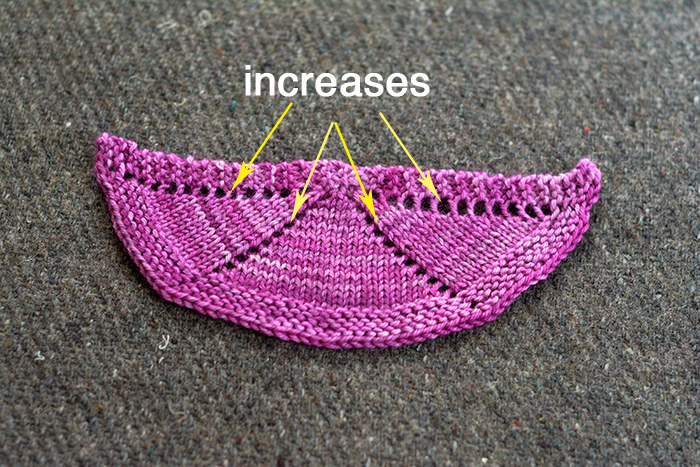 Rather than a single triangle, this shawl is shaped with three

It’s also possible to play around with the placement of the increases on a shawl that has six increases for every two rows, like our shallow triangle.

Had I angled the spines differently, the shaping would be different, even with the same number of spines. 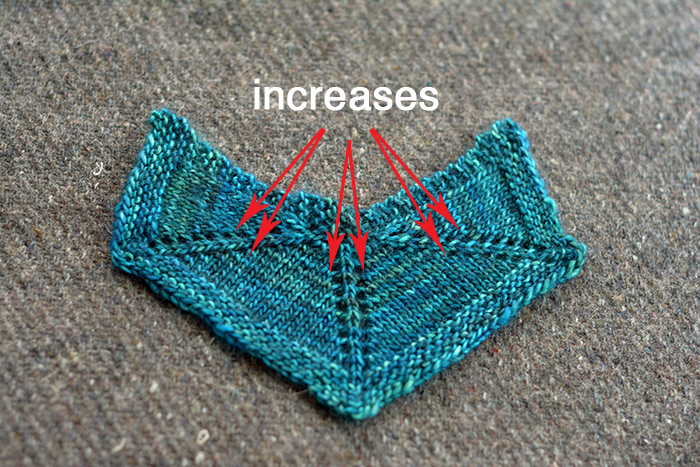 The traditional shawl of the Faroe Islands is a little more complex than the one I am showing below, but the principles are very similar.

To create a center panel, you make a longer garter tab than the one used for my other examples, and pick up more stitches along the side. Because I was making a miniature shawl, I made my center panel only six stitches wide, but in a traditional shawl, it would be much wider.

Although the Faroese shawl grows at the same rate as the basic triangle, the center panel makes it wider with fewer rows. The proportion of the column to the rest of the shawl will change with more rows, appearing narrower as your shawl gets wider. 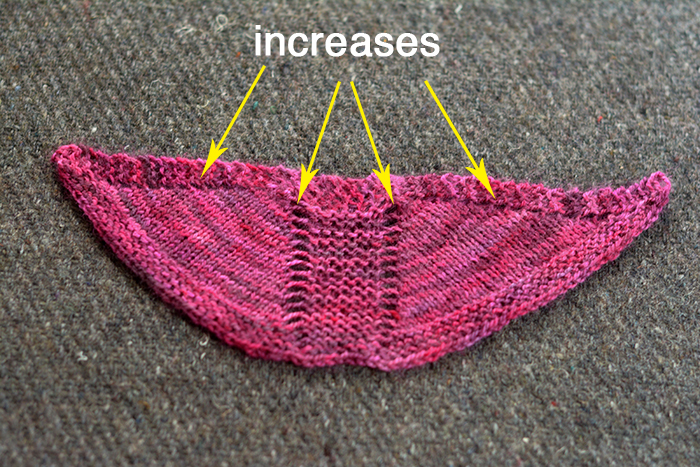 If you want a shawl that is a true half-circle, rather than the three triangles shaping of the magenta shawl, there is no better method than the shaping of Elizabeth Zimmermann’s pi shawl. The basic premise behind the traditional pi shawl, a full circle, is that the distance between the increase rounds doubles after every increase row. For a half circle, the principle is the sample, and the main difference is that the sample is knit back and forth rather than in the round.

For my sample, this worked out to increases every 2, 4, 6, and 12 rows, with the increase row worked on the last row of the section. This is not an exact doubling as in the pi shawl worked in the round, because I chose to work my increases only on a right side row, which meant that I needed my numbers to all be multiples of two, (a traditional pi shawl goes 3, 6, 12, and so on).

The increases are worked every other stitch along the shawl body. In between increase rows, there are no increases worked along the top edge, unlike with the other shawls shown so far. 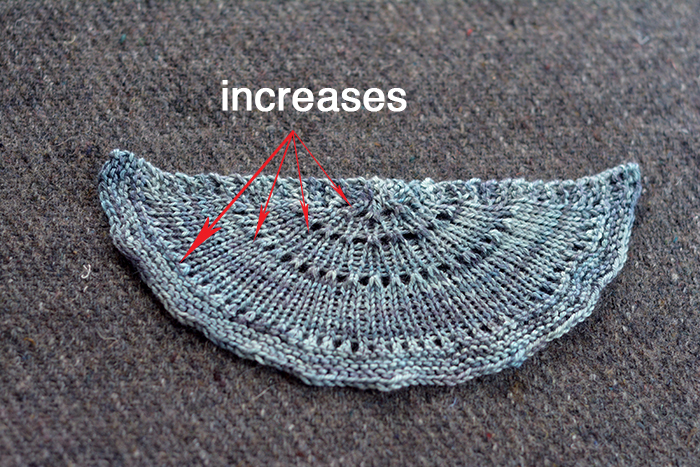 A couple of comparison shots

There is a myriad of ways shawls can be shaped. I’ve highlighted a few, and I hope you’ll go out and have fun with them!

Below, I grouped shots of my miniature shawls to show how different the same rate of increase can be. 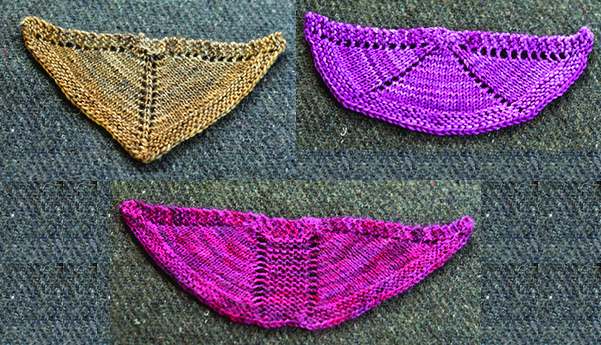