While we’ve already talked about how to draw facial features, the eye is probably the most challenging facial feature to draw for a variety of reasons. They are the first feature we notice about someone when we meet them. Almost all of our non-verbal communication is through eye contact. Eyes reveal far more about a person than, say, the nose or ears. There is a reason they are called “the windows of the soul.” For all these reasons, it can be quite frustrating getting them just right, so here’s a few tips to make drawing realistic eyes a bit easier.

Many of us learned a simple visual formula for drawing eyes as children. For years the eyes I drew looked something like a football with two circles inside for the iris and pupil. 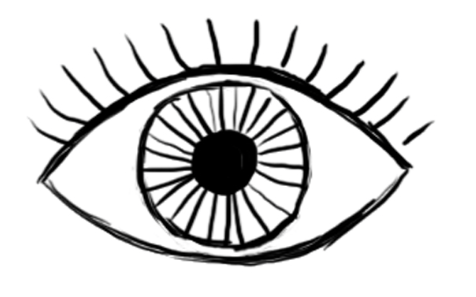 Of course, no one’s eye really looks like that. The most important thing to remember about drawing realistic eyes is to draw what you see, not what you know. Every person’s eye is different and no visual formula, even if it’s more sophisticated than the one above, can substitute for the real thing. That said, there are a few things you’ll notice most eyes have in common.

An eye is asymmetrical.

Rather than tapering smoothly to a point on either end, an eye has subtle differences in the shapes of the top and bottom eyelids. 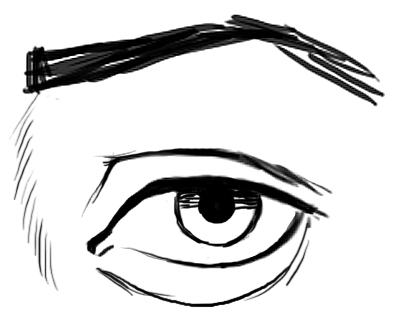 The human eye is three-dimensional.

Your eyeball is a sphere, but most of it is concealed by your eyelids. Notice above how the eyelids look as though they are wrapping around that spherical shape. This is even more evident in profile view. 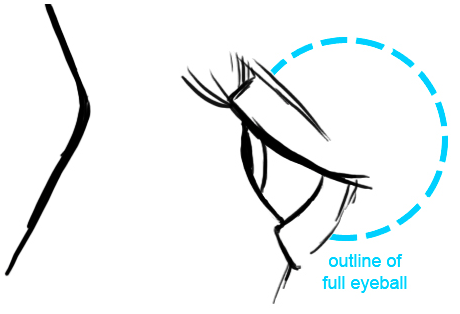 Unless the person you are drawing is surprised, most of the time the iris will be covered partially by the top eyelid, as seen in both examples above, and in some cases both the top and bottom eyelids will cover some of the iris, as in when your subject is squinting or sleepy.

The top eyelid casts a shadow on the eyeball.

Because the top lid projects out a little further than the eyeball itself, and also in part because it has the thicker set of eyelashes, it casts a shadow along the top of the eyeball in most lighting situations. This can be easily depicted simply by making the line of the top eyelid thicker than the bottom..

However, the top eyelid receives more light than the bottom.

The best way to draw a realistic eye is to use value to suggest volume. I’ve used gray to show how value can do this for the line drawing below, but the same effect can be achieved with other kinds of mark-making as well. 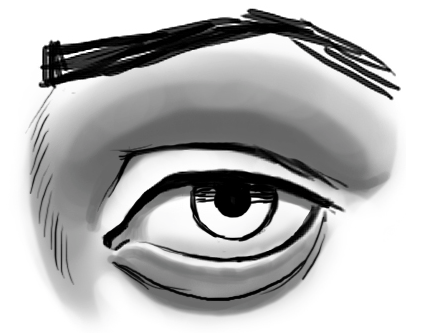 Assuming an overhead light source, the underside of the brow overhangs the eye and is therefore in shadow. The upper eyelid faces upward, so it receives light, and it also casts a shadow on the uppermost portion of the eyeball. The eyeball itself is curved, so the bottom receives less light than the top. The bottom eyelid faces down, and receives little light, and also cast a shadow on the portion of the face directly beneath it.

It’s important to remember that every eye is different. Some people have heavy eyelids or heavy brows, some almost no eyelids or brow at all. Thinking about how value suggests three-dimensionality can help you go a long way toward drawing realistic eyes.

How are you including eyes in your next project? Learn more about drawing a head here.