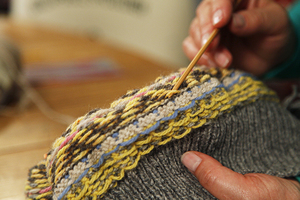 Some things to keep in mind when trying out jacquard knitting. It’s not something you can just do for part of a project. Once you want to start a project with jacquard knitting, you’re committed to maintaining the technique throughout the project. This is because jacquard knitting is thicker than regular knitting and because of the way the background colors bleed through to the frontside of the project, almost providing part of the pattern.

Because you’re working with a double-sided fabric, it’s not well-suited to a chunky or bulky yarn as that will produce a very thick, inflexible fabric.

Jacquard knitting is not for the feint of heart. But if you’re up for it, you can create a fabulous, colorful piece unlike anything else you’ve ever knitted.

3 Responses to “The Jacquard Knitting Technique”