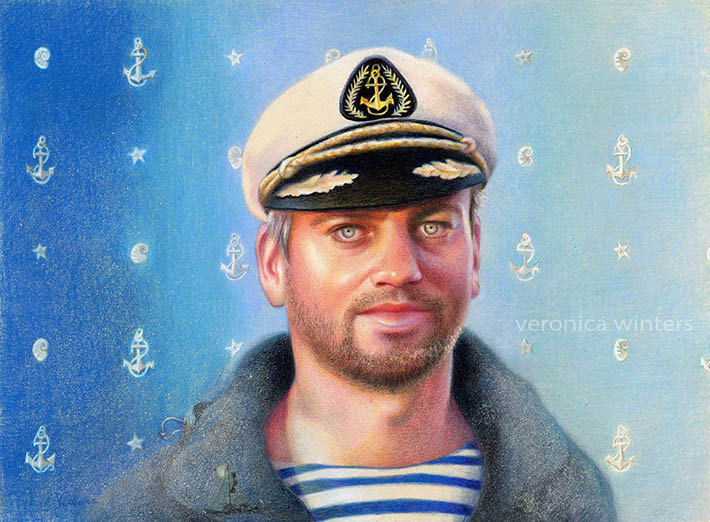 The manliness of a male face lies in its clean, straight lines. To draw it correctly, an artist must consider the head’s rotation, gesture and the placement of facial features.

A model’s likeness is achieved through careful observation and adjustment of the classical features. To catch the model’s character, artists frequently sketch people from life and interact with their models to understand and to capture the “soul” of the sitter.

In the drawing above titled “When She Sails,” I made a graphite sketch on a separate piece of paper and then transferred the outline onto my fine drawing paper to work in color. It’s crucial to work out the anatomy of the face in the sketch. I always tap the graphite lines before I begin shading in color. I work on the eyes first and then build the skin tones and everything else in the picture.

To learn how to draw a male face, it’s best to sketch from life and pay attention to the following differences in faces between the sexes.

A few differences between male and female face are: 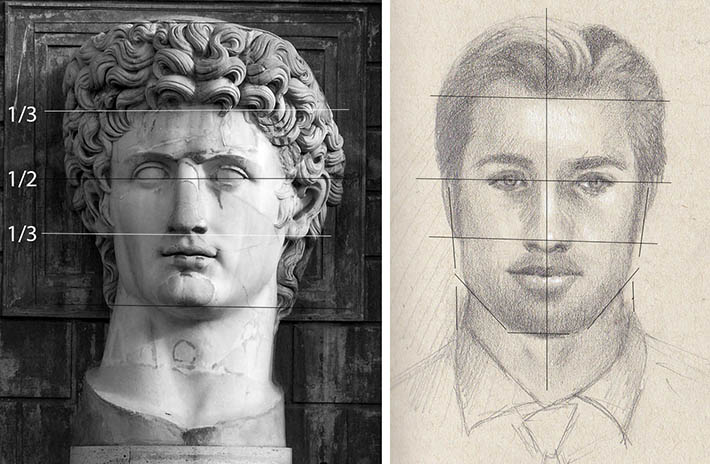 When drawing a face, think of it as a shape divided into parts. The horizontal eye line divides the face exactly in half. Then the lower half is divided in half, too: from eyes to the tip of the nose and from the nose to the chin. The ears sit between the eyebrow line and the tip of the nose, but if the face goes up or down the position of the ears changes.

Once you’ve divided the head into these sections, you can place the features (like eyes, nose and ears) based on the guiding lines you sketched. 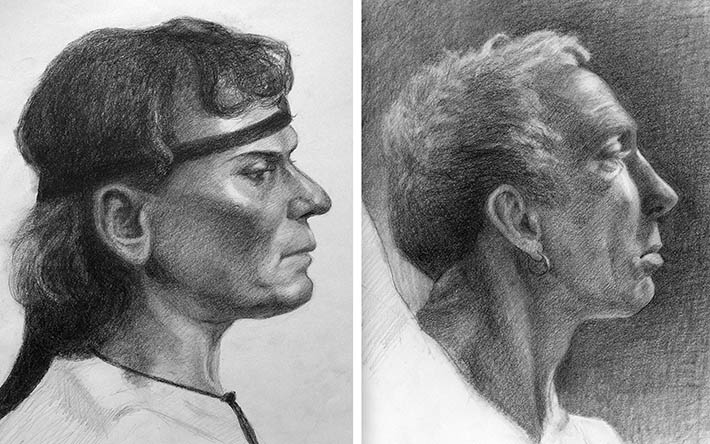 Start by sketching the top and bottom of the subject’s head to “lock” it on the page. This helps keep you within the bounds of the marks and determine accurate proportions without accidentally shifting or cropping the subject. Then, draw a vertical center line to show the face’s rotation in space. Finally, sketch several horizontal parallel lines following the proportions described above.

In the second step, sketch the general placement of facial features and quickly shade the darkest areas to set the contrast.

Start re-establishing the deepest darks with a soft 4-6B graphite pencil. Then, shade the middle tones with a 2B pencil and lift out the highlights with a kneaded eraser. Keep the direction of the light and how it affects form as you sketch.