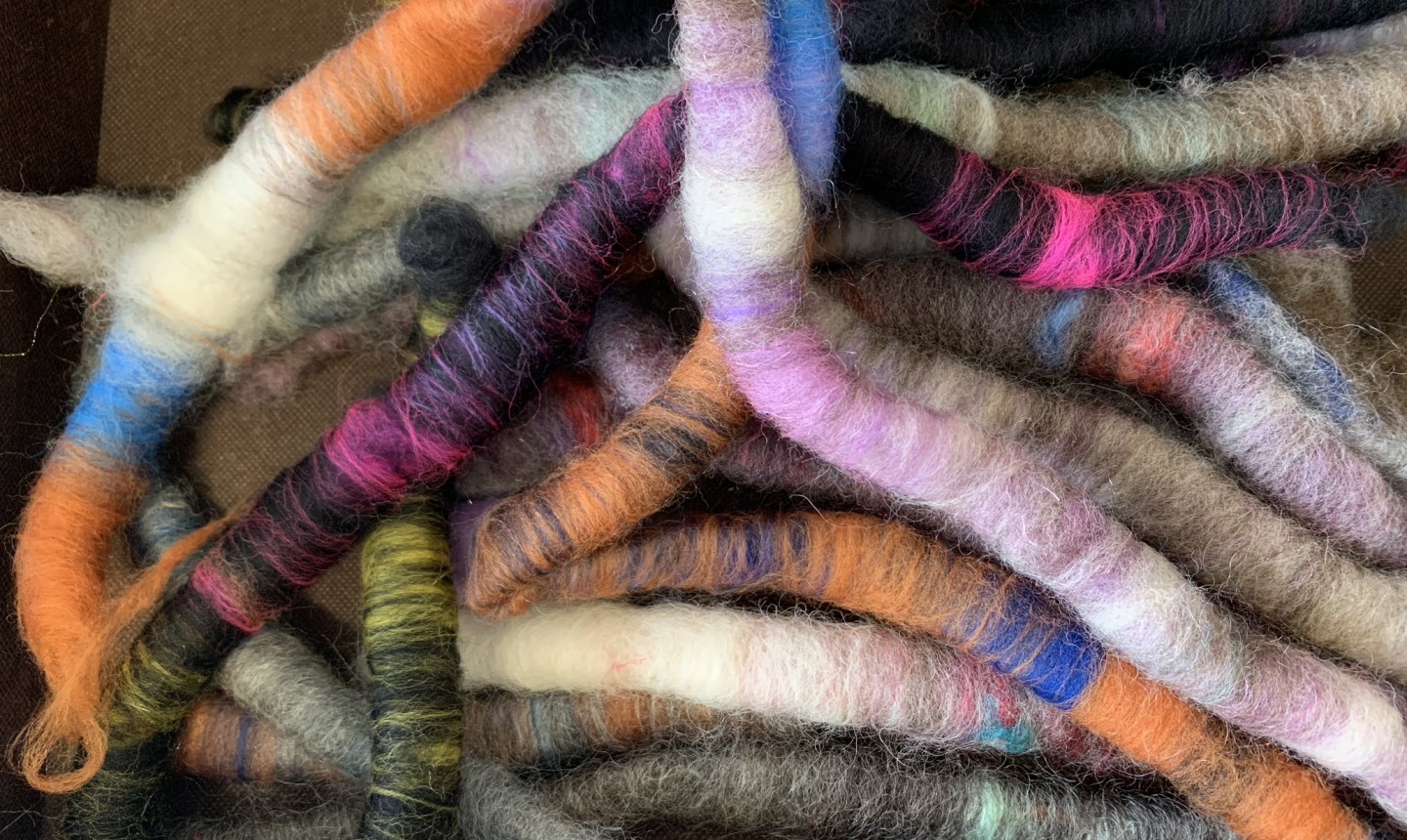 For many knitters, myself included, the New York Sheep and Wool festival (lovingly referred to as Rhinebeck) is the stuff of dreams: for one glorious weekend, knitters gather in upstate New York for a fall festival celebrating all things sheep and wool. It’s sweater weather, and there are apple cider donuts. It’s like knitting nirvana.

So you’d think when it was finally my turn to sip from the holy grail of knitting, I’d know just what to do. For example: I’d knit myself a Rhinebeck sweater. Except, I didn’t.

Actually, I didn’t do many of the things you’re “supposed” to do at Rhinebeck.

The chance to make the trip snuck up on me at the last minute, and when I realized I wouldn’t have months to plan and knit the perfect sweater, I opted out. (Never mind that a friend finished knitting hers on the plane, and blocked it in the hotel sink. Total Rhinebeck rock star.) Instead, I packed a few old favorite handknits, including a sweater knit by my mom. And you know what? No one knew the difference!

And then there’s all the yarn to buy. Yeah, I didn’t do that either… I felt this most acutely when I finished my current work-in-progress on the plane ride home and had no yarn to play with. But, there’s a silver lining here! I spent those remaining hours daydreaming about my next project, starring a few of the glorious skeins that made an impression on me at the festival. And since I’ve squeezed these skeins in person, I have no qualms about buying online once I get home. 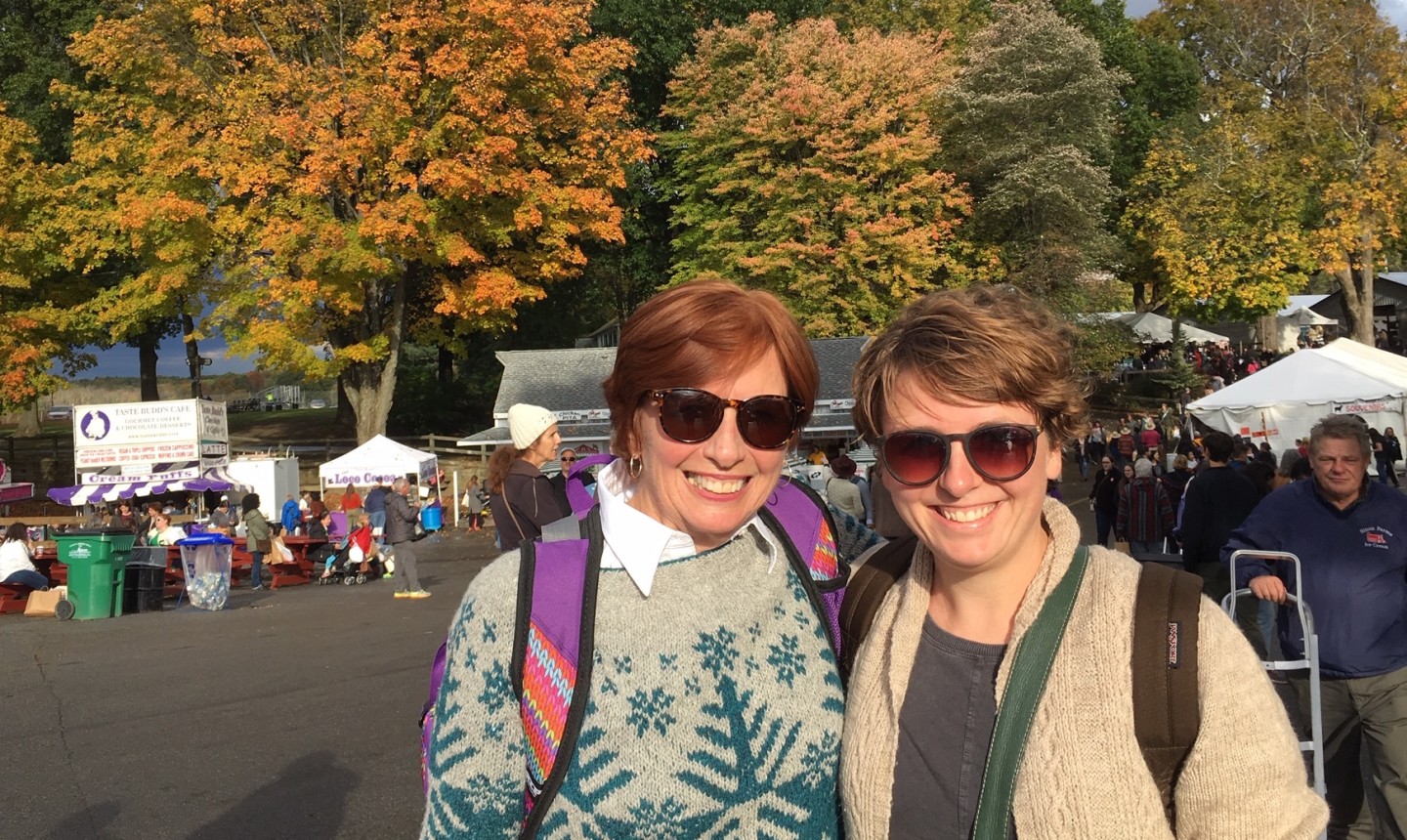 But that’s enough about what I didn’t do. Here’s what I did instead: I took a class. My mom, also a first-timer Rhinebecker, came with me (that’s us in the picture above), and we somewhat randomly signed up to make needle-felted Santas. The class was AMAZING. True to form, I stabbed myself immediately with the felting needle and bled all over my white wool, but Santa wears a red coat, so who can even tell?

We had breakfast with Norah Gaughan, one of my knitting idols. She was gracious, she was humble, and her sweater was gorgeous. It was the perfect start to the day.

And since we weren’t too focused on yarn shopping, we had time to admire so many other things: bag after bag of fleece straight from the sheep, hand-carded wool, and the most beautiful cylinders of brightly colored wool (turns out these are rolags, used to hand-spin yarn).

From there, we visited the women selling fair-trade African baskets, cheered on a spinning wheel competition, watched sheep dogs do their thing, and looked at all the animals.

And then, there were the sweaters. I don’t think I’ll ever see as many handknit sweaters in one place as I did that weekend. Even better than the sweaters? The people who knit them. Everyone was so gracious, so willing to talk about their knits, and so genuine in their praise of other knitters’ work. I heard one woman comment that going to Rhinebeck does wonders for her self esteem. I get it.

So I guess what I’m saying, is yeah, I wish I’d just grabbed that skein of sock yarn I was admiring (because you can never have too much sock yarn). And maybe next time I’ll block a Rhinebeck sweater in the hotel sink. But, all things considered, wool, sheep, and sweaters against a moody fall sky in upstate New York is a win, no matter how you spin it.