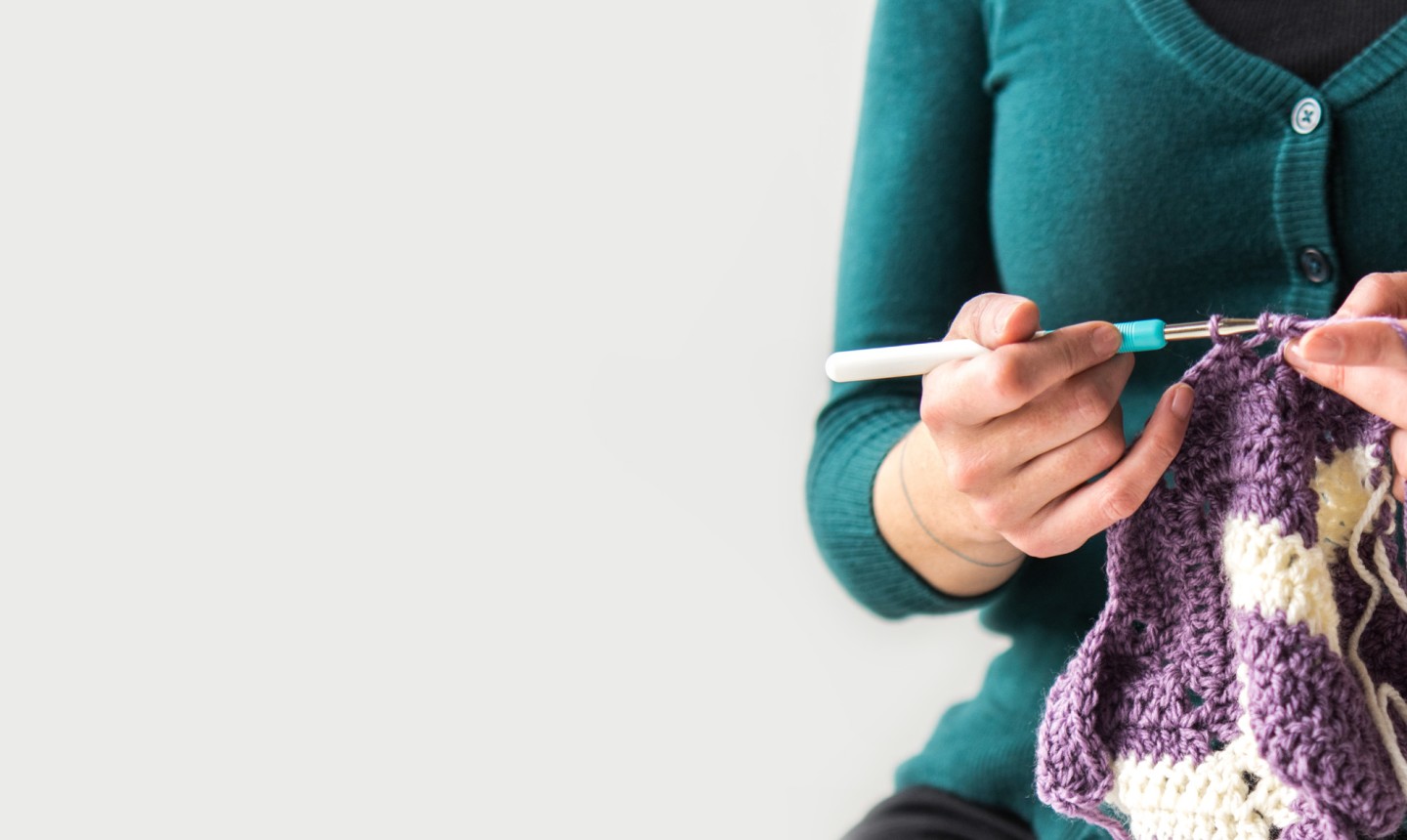 I stared down at my crochet hook in disbelief. The tool I’d used since I was a teenager suddenly felt so foreign to me. I couldn’t remember how to hold it correctly or even how to do a basic slip knot, much less actually make something. Three weeks earlier, my whole world had changed. A shocking, brutal attack by an intruder at my workplace had left me with severe head injuries, memory loss and terrible PTSD. But of everything that horrific experience did to me, not being able to crochet or knit felt like the worst of it.

Once my physical wounds started to heal, I knew I needed an outlet to keep my mind off the horrible flashbacks. And, as I had done for most of my whole life, I turned to knitting and crochet. My mom taught me to knit when I was a little girl — almost 50 years ago! — and I actually taught her to crochet later on after I learned from a friend. I have countless memories of sitting with my mom and grandma making afghans, baby sweaters and more. We worked as we chatted or watched TV; we used it to celebrate good times and as a refuge during bad times. Only now, it wasn’t working for me. My memory loss was too severe, and all I could figure out how to do was a chain stitch. As I sat there stitching up the world’s longest chain … I just wanted to cry. Without my ability to create something beautiful with my hands, I somehow felt I’d lost everything.

My determination, it turned out, wasn’t lost. Since I was attacked in the dark, night time became my enemy. I’d lie in my bed trying to sleep, and just relive that horrible event over and over again. I thought to myself: “I can’t do this, I’ve got to figure something else out.” So I’d pull myself out of bed, grab my crochet supplies, and head to my computer. I’d read an article and look at pictures, then pick up my hook and try to replicate what I was seeing. Nothing worked, and it was extremely difficult to struggle with stitches I used to know so well. Many times I wanted to give up, but then my attacker would have won. And there was no way I was letting that happen.

Eventually, I found my way to Crochet: Basics & Beyond with Kim Werker on Craftsy. Since I was hardly sleeping at this point, I’d just stay up and watch the videos over and over again — I can’t even tell you how many times! It was frustrating at first. I’d watch a little bit, then try to do it myself and completely fail. I thought maybe I couldn’t do this anymore, but I was unwilling to accept that as an option. So I’d go back to the beginning again, and I’d watch and try to do it while she was doing it. Or sometimes I’d watch and take notes, using those to complete the stitches with the video paused. I loved how Kim always said not to think of your work as too precious. If you need to rip out some stitches, just do it and try again. That really helped put things in perspective, and kept me going back for more.

Eventually, I started to make progress. I learned to use stitch markers every ten stitches since it was difficult for me to keep track of where I was, and also realized you could hit the “rewind 15 seconds” button to quickly watch something again. I worked through each episode, relearning everything from basic stitches to what to do if I made a mistake to how to make a granny square. It look me a long time to master each thing, but once I had it down … it stuck.

More than two years after the attack, I still relive the horror often. But I also have a lot to look forward to: Namely, all my awesome WIPs (works in progress)! The first big thing I made was a baby blanket for one of my doctors. She was having a girl, so I stitched it up with lots of lace details and different shades of pink, just as I used to do with my mother by my side. But now, I’m making it all. When people come over, the first thing they notice is that I have six or seven projects going at once. I’ll be making three different blankets in crazy designs, a scarf, some little throws, and maybe even a dog bed or a cute basket, too! And every second spent stitching is a second not spent dwelling on what’s happened to me.

My only regret now? That I don’t have another 50 years to make all the projects in my queue!

5 Responses to “After an Injury, Crochet Brought This Maker Back to Life”