There is much debate among many in the cake decorating world about mixing fondant and modeling chocolate. Some say to keep them separate and use them for different decorating techniques. Others believe mixing them can bring out the good qualities of both mediums. I decided to put them to the test and see which performed the best. I tested the fondant, modeling chocolate, and then a mixture of half fondant and half modeling chocolate side by side to compare and contrast the three mediums. 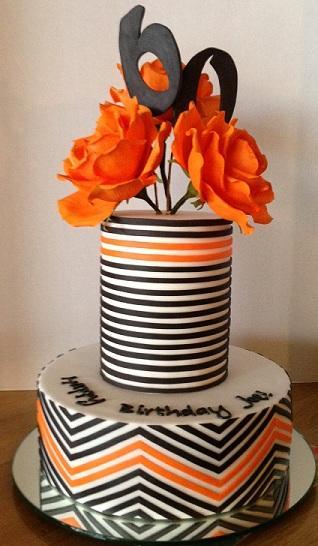 A few notes before we begin: 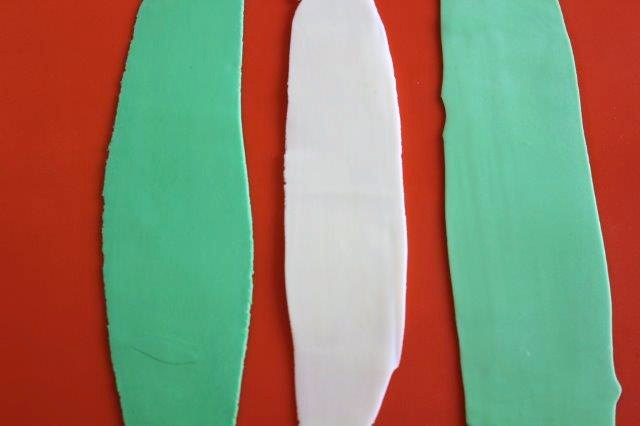 I was surprised to find that when I mixed the two mediums together, the 50/50 mix turned softer than plain fondant. It felt like very soft fondant, but did not release oils as modeling chocolate does when it gets too warm.

I rolled out 1 ounce of each and found that the 50/50 mix did roll more easily and thinner than fondant or modeling chocolate. It did not stick or tear the way modeling chocolate does, and it stretched more than plain fondant. 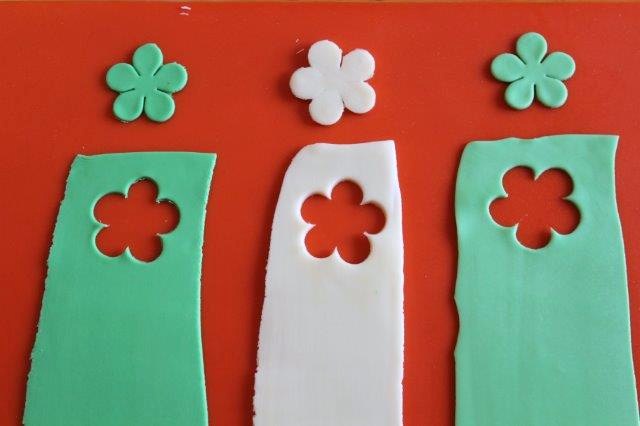 Flowers cut easily out of all three mediums. There was more “fray” on the modeling chocolate, but the fondant and 50/50 cut about the same. 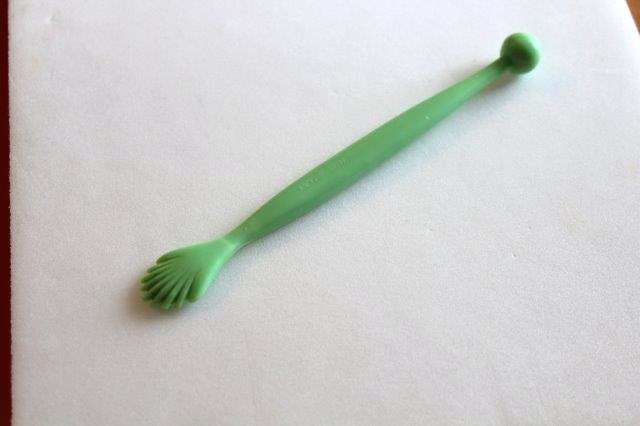 Transferring the flowers onto my foam mat turned into a bit of trouble with the 50/50. It tore a little bit because one petal stuck to the silicone mat due to how soft it is. When thinning the edges of the petals, I found that the 50/50 performed much like the fondant — it made nice, thin edges with one smooth motion around each petal. Modeling chocolate alone is hard to thin because it can be sticky and hard to stretch, so I was happy to see that the 50/50 worked so well. 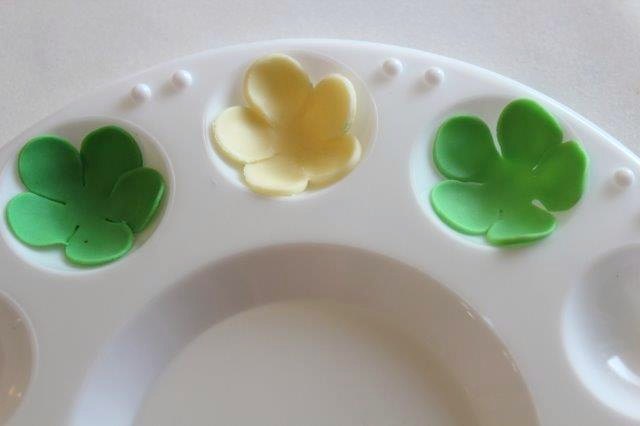 After thinning the petals I placed them in a paint pallet to dry. I allowed them to dry for about 2 hours. When I removed them from the mold, the fondant and modeling chocolate held their shape beautifully, but the 50/50 did not dry or harden and I was left with a flat open flower. 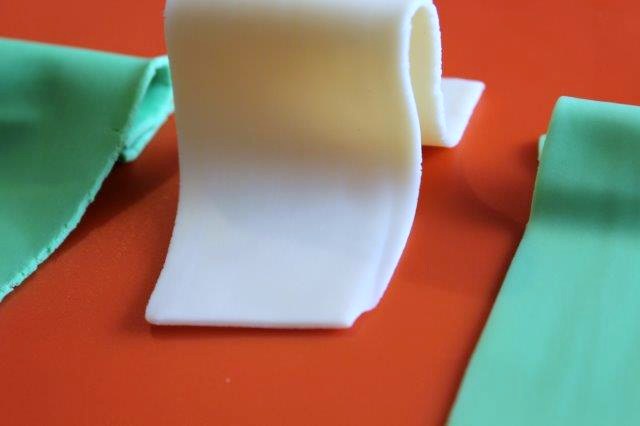 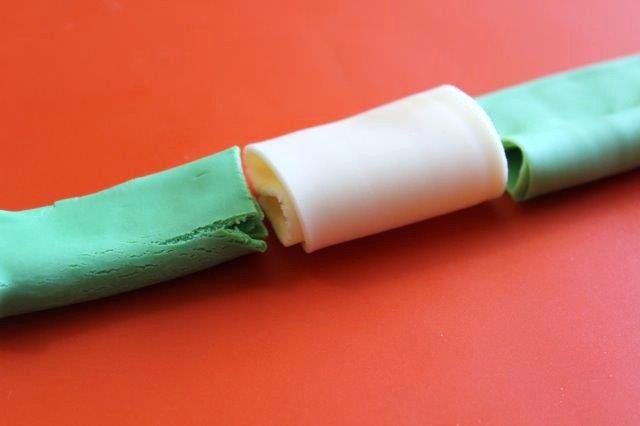 In addition to the flower petals, I also rolled out strips of each and let them dry for about 15 minutes. I then bent them while looking for cracking. The fondant performed as expected with cracking and elephant skin, the modeling chocolate was still pliable yet held its form well. The 50/50 was surprisingly soft and even when folded, did not crack at all. It did not hold its shape well, but the flexibility of the 50/50 was very exciting. After this test, I allowed the 50/50 to dry for another hour and still found the same results. 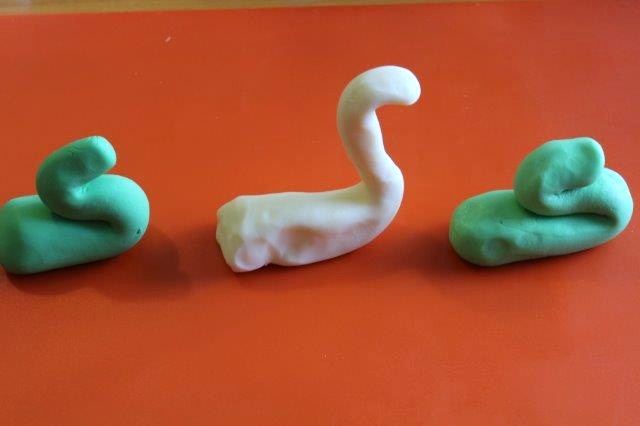 For this test, I measured out 3 ounces of each medium. I then quickly molded a swan-like form (It’s more of an ugly duckling). I was looking for the strength of a free standing form. The fondant and modeling chocolate both performed as expected, but I was surprised to find that the 50/50 was softer and less stable than the fondant. It just flopped down and could not hold its shape. 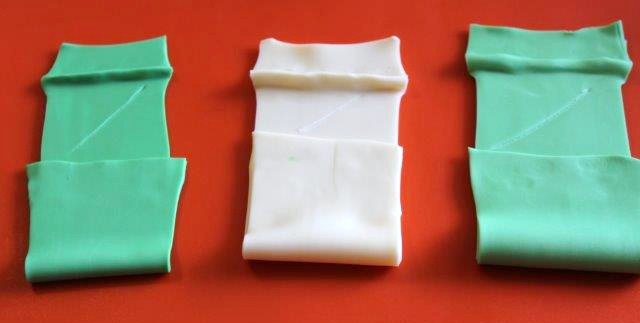 Our final test was to see which medium could be easily fixed in the case of three common mistakes; puckers, cuts or gashes, and folds. I rolled out all three, then folded them over on the bottom, put a pucker in the top and used my fingernail to put a gash in the middle. I then gave myself 30 seconds on each medium to use my fingers to smooth out the flaws.

After running all of the tests, I have concluded that mixing fondant and modeling chocolate can have helpful results. I would not use it for modeling figures or for ruffles or bows, due to its softness and flexibility, but I think it would be very helpful when making stripes or applying flat shapes, like polka dots on the sides of cakes, due to its long drying time.

I think 50/50 may be helpful when covering a cake because it repairs itself more easily than plain fondant and gives you more working time, but it also does not dry to form a nice crust like fondant, which could make it harder to work with over time. It could also make it harder to transport and stack. I would like to try mixing the fondant and modeling chocolate at a lower ratio of modeling chocolate, maybe 90/10 or 80/20.

I believe each of the three mediums are useful and each have strengths and weaknesses. Finding which will work best for you is a personal preference, but don’t be afraid to experiment with different mixtures. You may find your perfect medium!

Do you mix fondant and modeling chocolate? Which ratio works best for you?