To salt or not to salt? That seems to be the question. 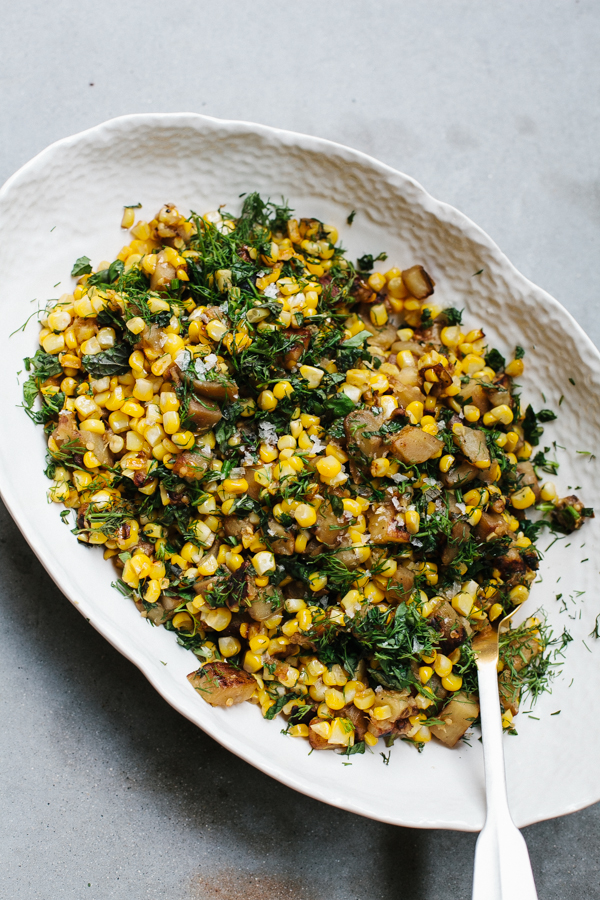 Honestly, it’s because of this question that I’m often kept from grabbing eggplant from the store. It wasn’t until I recently had a simple roasted eggplant dish with a mint yogurt sauce that I saw past the pressure of salting and suddenly felt the stress of it all was worth the reward. The eggplant was sweet, silky smooth and the perfect vessel for the fresh and pungent dip. Totally worth whatever it took to prepare the eggplant. But is it really necessary? 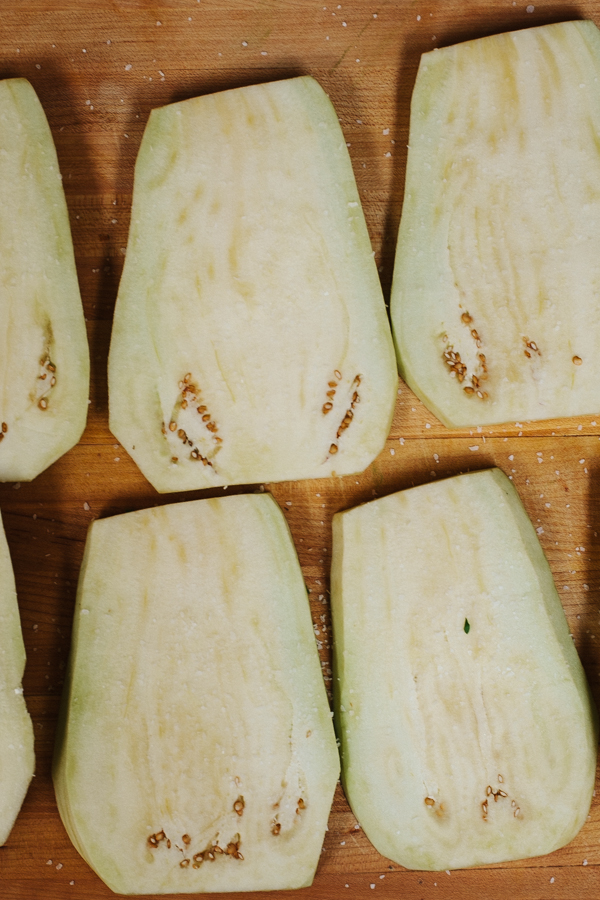 What do you mean by salting?

Well, some people think that before you cook your eggplant you need to first generously sprinkle salt all over the sliced eggplant. After the eggplant sits for 30 minutes to an hour you notice quite a bit of liquid has been removed. Before proceeding to cook the eggplant you either pat it dry or give it a rinse. No one seems to be entirely on the same page.

So here’s the thinking behind the salting. Some believe that salting removes the bitter flavors typically present in certain eggplant varieties and ones that haven’t seen the dirt for quite some time.

But actually salt doesn’t remove bitter flavors it just masks them and mellows them. Worth it? I’m not convinced.

In my research I also found that most modern eggplants aren’t bitter at all especially if you buy them fresh and look at more slender and tender varieties.

The other thought is that because water is drawn out during the salting process it makes the eggplant less sponge-like so it won’t absorb nearly as much fat while cooking. Well, it seems that regardless of what you do, eggplant requires quite a bit of fat as there really is no denying its sponginess but again, this isn’t enough to convince me of the merits of salting.

The one argument that has me nearly convinced that salting is indeed a worthy endeavor: FLAVOR! Whenever possible I pre-salt my meat — like, days in advance. Seriously. The salt draws out the moisture but then overnight the moisture is reabsorbed but now all that liquid is salty so as the meat reabsorbs the lost liquid the meat is flavored not just on the surface but deep within. So if pre-salting eggplant does the same thing, then maybe, maybe, I’ll do it. The thing is though, I don’t really see this making a huge difference. I’ve learned from many chefs that the key to salting is to do it throughout the cooking process and not just at the end. That way the food is deeply flavored rather than just tasting like salt.

So here’s my verdict: I don’t pre-salt. But rather I use plenty of fat while cooking eggplant and salt along the way; when it first hits the pan, when I add another ingredient to the mix and at the end.

What about peeling you say?

Well, if it’s for the grill or if I’m using the eggplant in large pieces, like in an eggplant Parmesan, then I leave the skin on. Or if I’m using the slender Japanese varieties, the skin stays on. In the case of the sauté recipe I have for you today, I used a large globe and because I cut the eggplant into small cubes I opted to peel so they wouldn’t get in the way. I find a small paring knife to be the best tool for this job but others swear by a vegetable peeler. You be the judge.

Now, let’s eat practice how to cook eggplant the best way with this simple but oh-so satisfying recipe for eggplant and corn sauté. 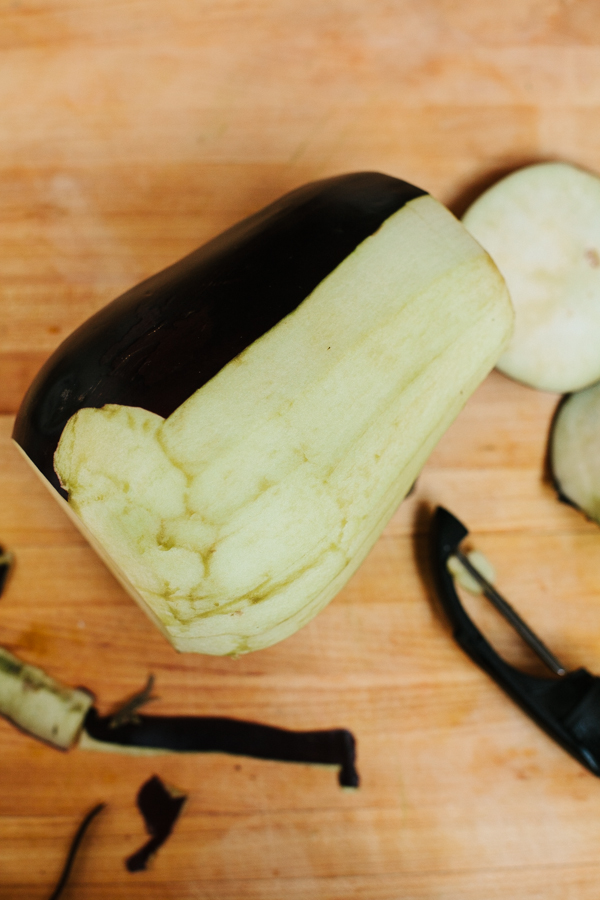 Add the oil and butter to a large skillet set over medium-high heat. Add the eggplant in an even layer along the bottom of the pan and let it sear for 2 to 3 minutes. Add a hefty pinch of salt.

Give the eggplant a stir and continue to cook until most pieces and sides are deeply golden and in some parts charred. Add a touch more oil or butter if the pan is really dry.

Don’t stir too much as the eggplant will now start to get quite soft. 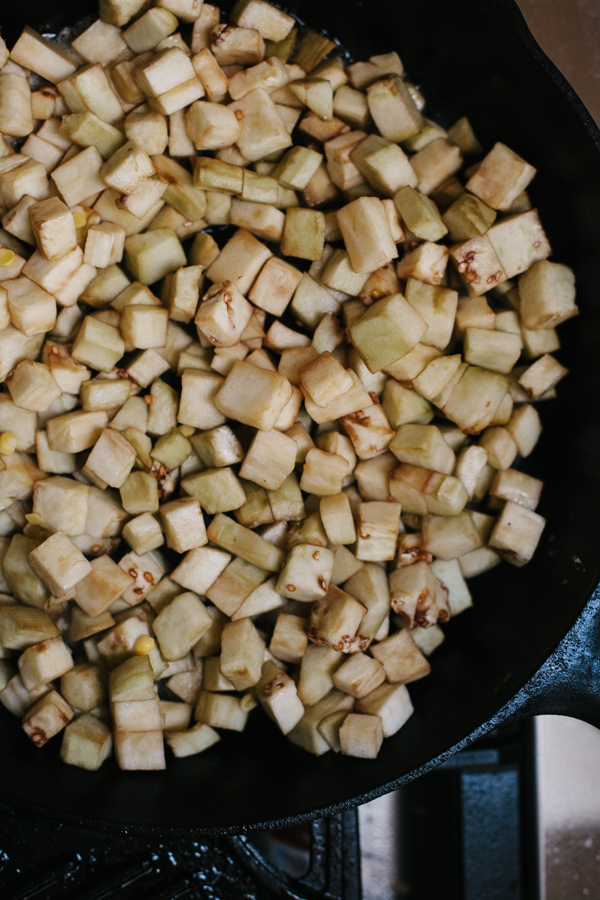 Once golden and turning soft, toss in the corn. Cook until the corn brightens in color. Add another hefty pinch of salt and some freshly ground black pepper.

Remove the pan from the heat and toss with fresh herbs such as dill, mint, basil, parsley and chives.