If you think milk and cake are better together, then homemade tres leches cake will be an absolute slice of heaven. 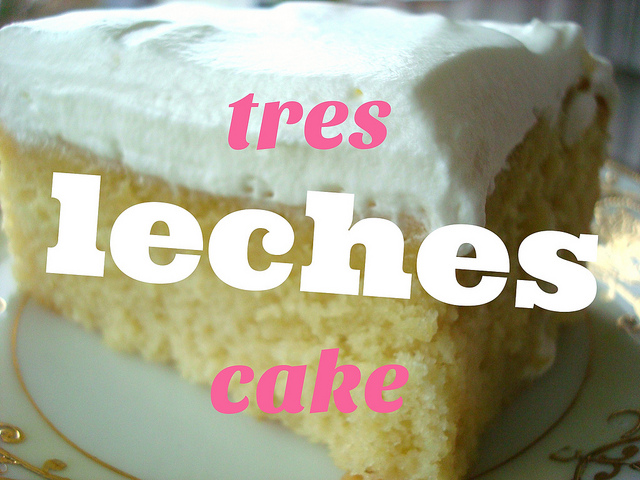 This classic of Latin American food and cooking translates as “three milks cake,” but can include up to five types of dairy depending on the recipe, which are used not so much in the batter as they are to create a decadent soaking mixture that is poured over the baked cake. The cake absorbs the milk mixture like a delicious sponge, and attains a nearly custard-like, but never soggy, texture.

Learning how to make a tres leches cake isn’t difficult. The cake is a snap to make using the measuring, mixing and baking techniques learned in Craftsy course The Wilton Method: Baking Basics, and the milk mixture and whipped cream are fairly basic to prepare. Though it may require a trip to the grocery store to stock up on the various dairy products called for to create this cake, it’s well worth it: this moist, pudding-like dessert is like no other. 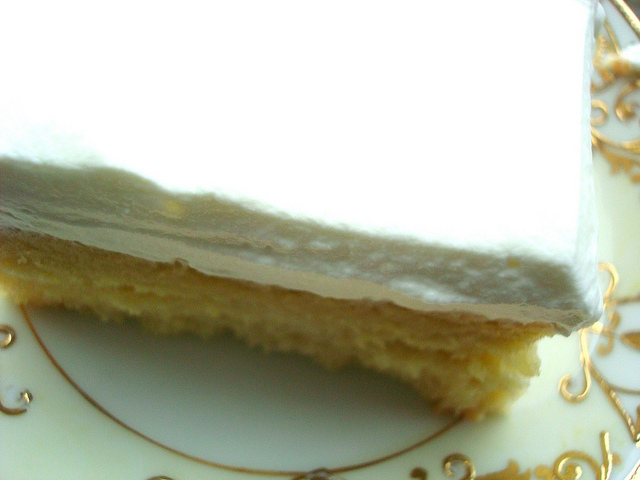 As you’ll see in the recipe, the cake is required to sit and soak with the milk mixture for several hours. While the cake is still delicious before the suggested time, the longer it soaks, the more infused and saturated with the flavor and texture of the milk it will become.

The rum is optional in this recipe. You can simply omit if you prefer a rum-less cake, or use (alcohol-free) rum extract.

Many variations on this cake exist, and you may see it baked in cake pans, and assembled like layer cakes with whipped cream icing, or served in squares from a sheet pan. This version is kept in the pan, which keeps it soaking in the milk mixture until serving. 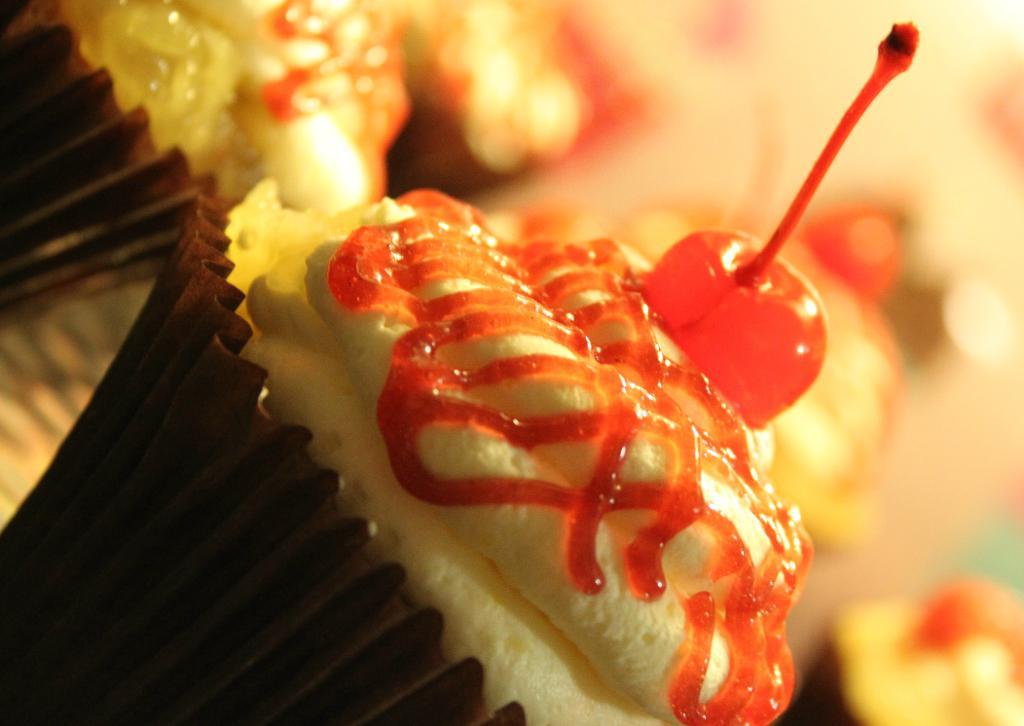 You can keep this cake simple, or fancy it up with some cake decorating techniques such as piping the whipped cream using decorative tips, or topping the cake with chocolate shavings or coulis, as in the case of these tres leches cupcakes.

For the milk mixture

Preheat oven to 350 degrees F. Grease a 9″ by 3″ pan. Lining with parchment paper is not necessary.

In a bowl, sift together the flour, baking powder and salt. Set aside for the moment.

In a large bowl, using a hand mixer, beat the eggs for 3 minutes. It will become a smooth liquid with little bubbles on the edges. 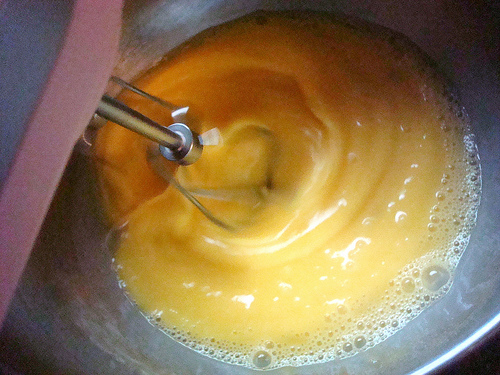 Stop the mixer, and add the sugar and vanilla. Beat for two more minutes on medium speed, or until the mixture thickens and becomes lemony in color.

Fold the flour mixture into the egg mixture, only mixing until fully combined. Spread the batter in the prepared baking dish. Give the dish a jiggle to reduce any bubbles in the batter (it might be a bit heavy for clattering on the countertop).

Bake in the preheated oven for 20 to 25 minutes, or until the cake is golden on the edges and only wobbles slightly in the center. It’s OK if it shrinks away from the sides of the pan a little bit.

Place the entire pan on a wire rack to cool until it is just warm, and poke all over the top of the cake with a skewer or the tines of a fork. If you do it while the cake is too hot, the cake will stick to whatever you’re puncturing it with, as seen below. 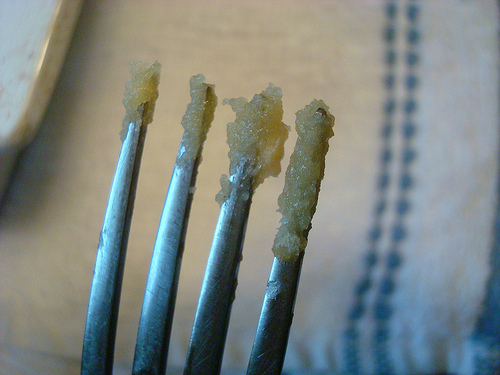 While the cake cools, you can prepare the milk mixture. In a saucepan, combine the milk, evaporated milk and sweetened condensed milk. Stir over low heat, until it comes to a simmer. Remove from heat, and stir in the vanilla and rum. Stir to combine. 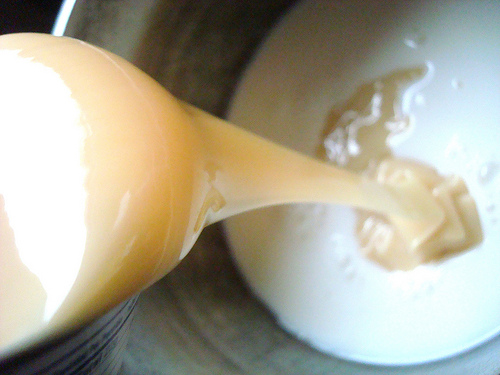 After you have pricked the surface of the cake, gradually and as evenly as possible pour the milk mixture over the cake, right in the pan. It will soak into the cake as you pour, as long as you pour slowly and ensure even coverage. Cover lightly (the top will be sticky) and refrigerate for at least 2 hours, or overnight. 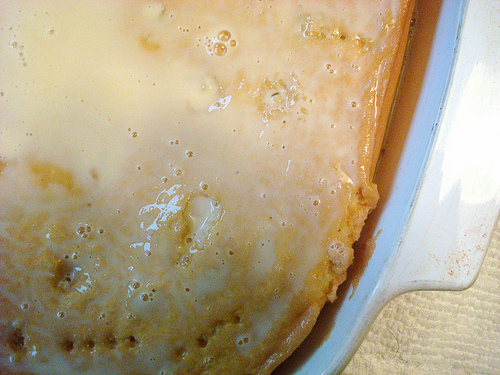 When you’re ready to top and serve the cake, whip the cream. Use a hand mixer to beat until the cream begins to thicken. Add the sugar and extract and beat until stiff peaks form. 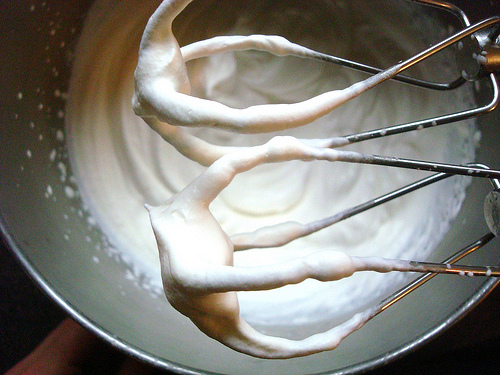 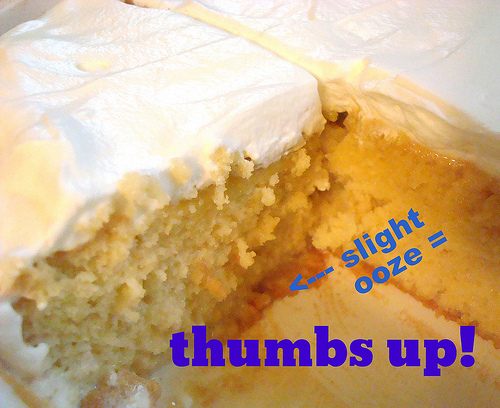 Have you ever tried tres leches cake?