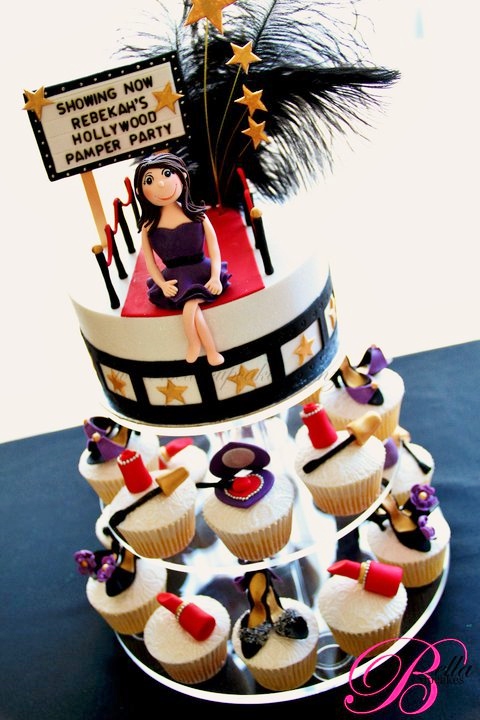 Especially during awards season, Hollywood is all about the glitz and glam! Capturing the allure and charm of the red carpet, Bella Cupcakes created this beautiful cupcake tower for a superstar’s Hollywood-themed birthday. The flawless cake depicts the birthday girl modeled out of fondant at her party’s premiere, while the marquee is personalized with the use of edible markers. The surface of the cascading cupcakes are covered entirely in patterned fondant, achieved with an impression mat, and adorned with delicate fondant shoes and make-up, adding to the glamorous feel of the presentation. 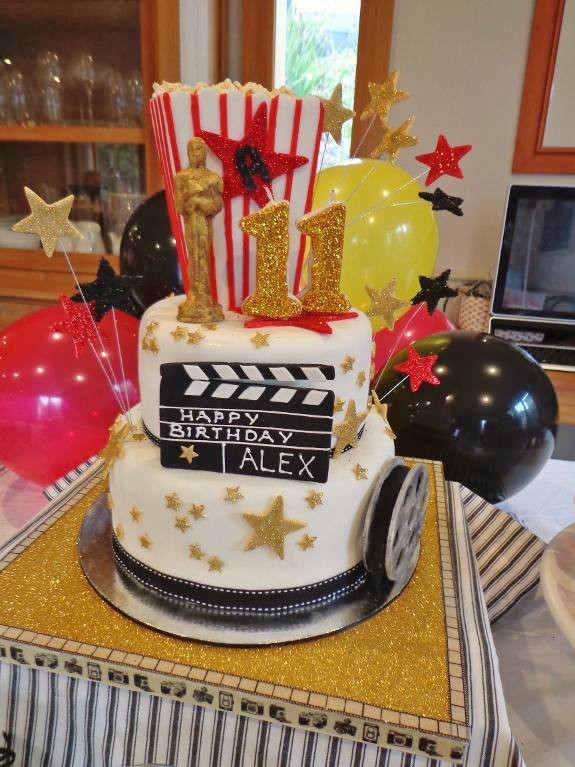 For her granddaughter’s 11th birthday, Bluprint member and cake artist PAKNZ prepared this ravishing movie night cake! The cake tiers are covered in white fondant and adorned with gold glittered stars, while additional fondant stars are bursting from all sides, adhered to cake wires. Further ornamentation consisting of a fondant popcorn box, film reel and clapboard are perfectly placed on and around the cake, along with a chocolate Oscar statue. Finally, the clapboard is personalized with the use of piped royal icing, creating a brilliant presentation. 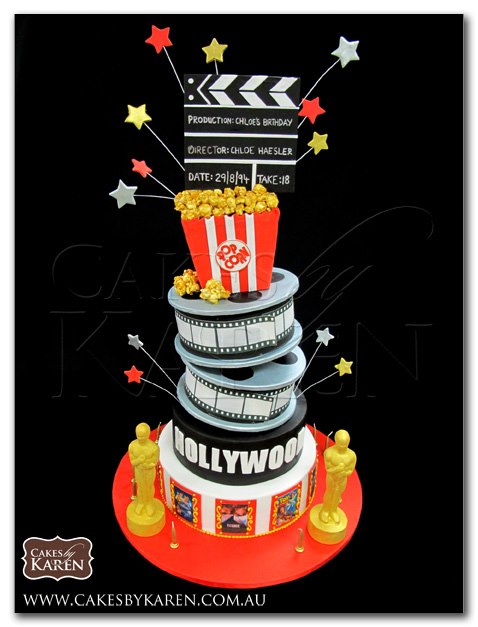 Photo via Cakes by Karen

This absolutely incredible tiered creation by Cakes by Karen reflects every aspect of Hollywood and the film industry impeccably! The bottom two tiers are stacked perfectly and decorated with movie posters and the iconic Hollywood sign. The next two tiers are film reels carefully assembled in a topsy-turvy manner, topped with a popcorn bucket and a clapboard. The impressive structure is finished off with shooting stars and two Academy Award chocolate statues.

[box type=”shadow”]Wanting to create a similarly stunning tribute to film? Learn how to make fondant popcorn. and get detailed instruction on how to create a support system and stack a multi-tiered cake in the course Topsy-Turvy Cake Construction with Richard Haskell.[/box] 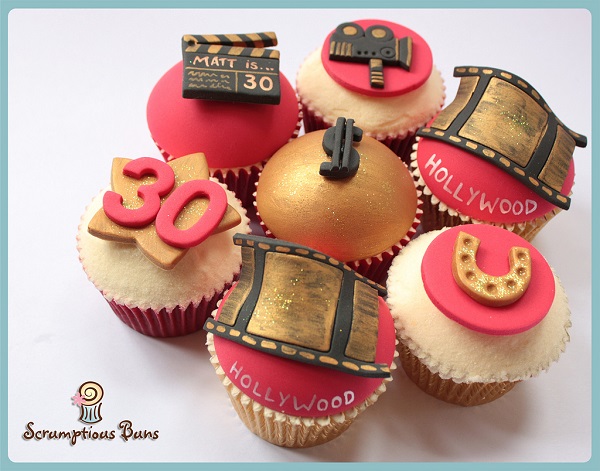 For a 30th birthday, Scrumptious Buns created this beautiful and elegant Welcome to Hollywood cupcake set. All the cupcakes were covered with a combination of smooth and textured fondant and topped with iconic film decor. Gold and glittery accents were carefully hand-painted throughout the designs, adding shine to each piece. 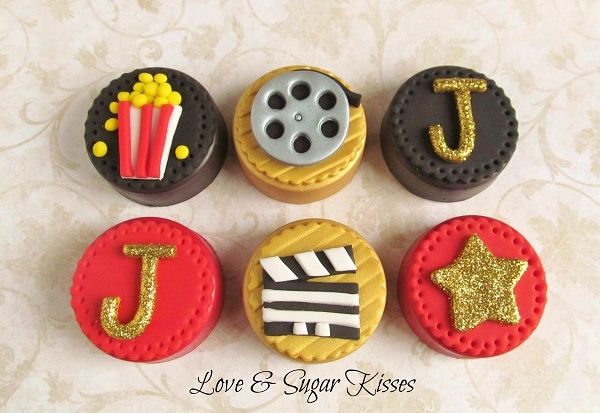 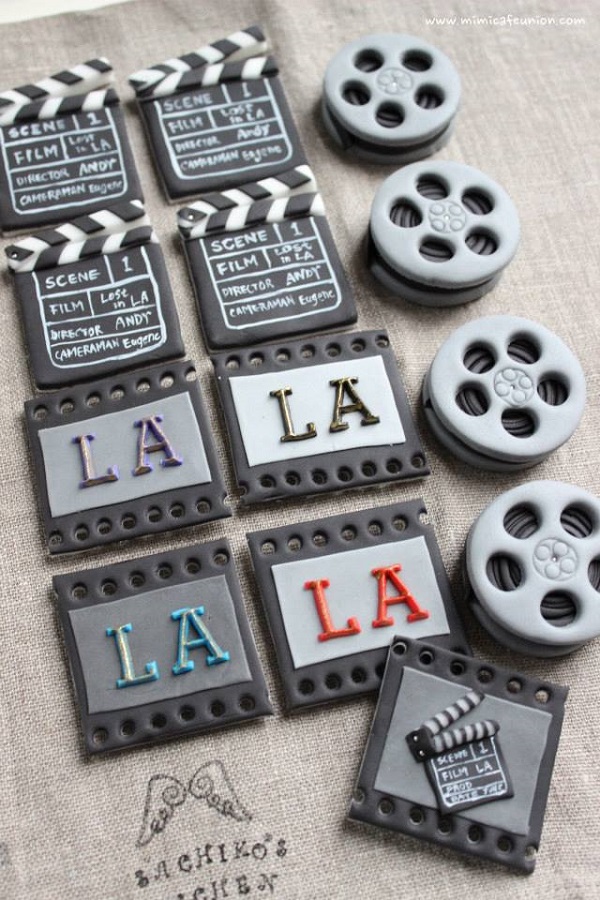 Mimicafe Union creates the most meticulous and detailed fondant toppers and these Hollywood designs are no exception! From film reels and tape to miniature clapboards, each item is carefully pieced together to depict the real deal. Writing and words can be achieved with edible pens and fondant letter cutters, while extra shine can be hand-painted with silver shimmer dust mixed with liquid (water or clear alcohol). 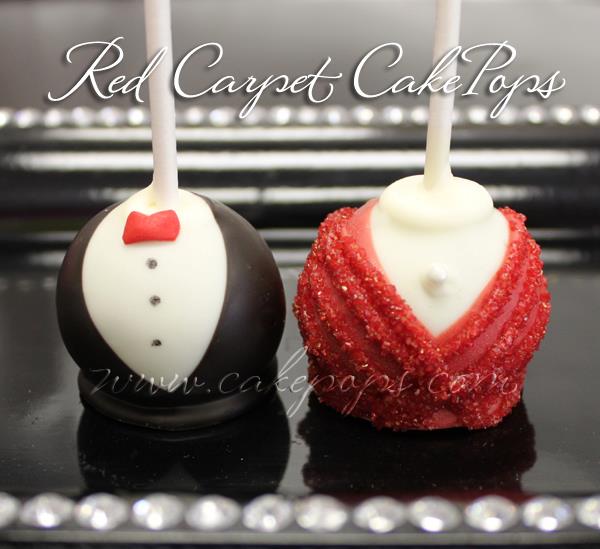 One question that has become extremely important and popular at the award ceremonies is: “Who are you wearing?” These gorgeous red carpet cake pops by Candy’s Cake Pops are dressed to the nines and would impress any fashion commentator! The tuxedo and gown were smoothly dipped in corresponding colored chocolate, while additional details were created via piping and adorned with sanding sugars on the red dress. 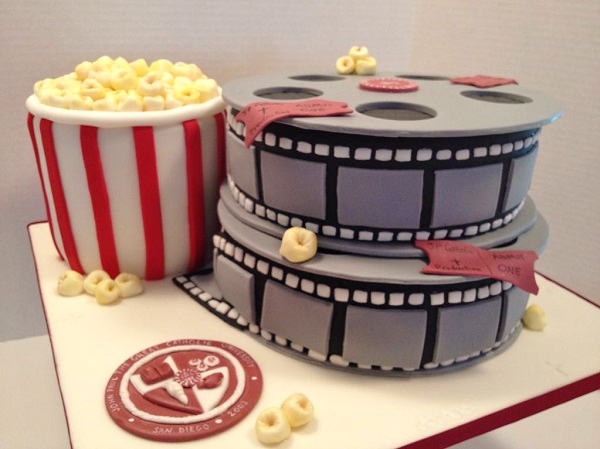 Bluprint member and cake artist Rhiannon1060 created this amazing movie-themed cake to resemble film reels and a popcorn box. Round cakes were covered entirely in fondant and the perimeter was embellished as strips of film. To add firmness to the reel cases, the circular pieces were made out of gum paste and dried completely to ensure they remained sturdy when constructed. 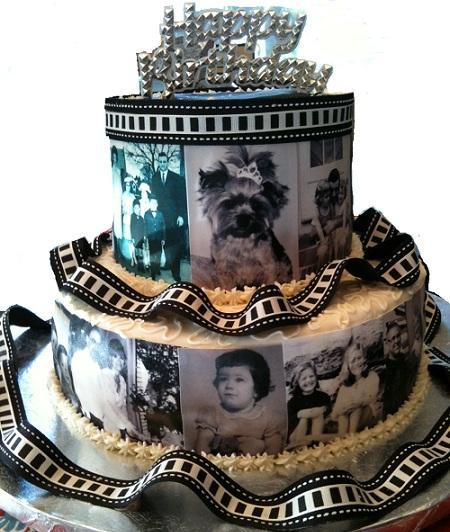 Bluprint member and cake artist countrypretty brought the memories of the guest of honor to life in sugar form with this beautiful vintage memories cake! The photographs were printed with the use of edible ink and paper and adhered to the icing, while fabric ribbons were attached together to mimic film strips and strategically wrapped around the tiers and cake board. The black and white color scheme is reminiscent of Old Hollywood and would be perfect for a classic cinematic theme. See the tutorial for more specifics to re-create this cake.

[box type=”shadow”]You might also enjoy our roundup of movie-themed cakes and our post on how to make fondant popcorn.[/box]

What is your favorite aspect of the Hollywood award ceremonies: the glitzy clothes, the stars or the speeches?