Get ready to cast on the warmest knits you’ve ever stitched! When you use the double knitting technique, you create a reversible knitted fabric with no wrong side (like the Double Knit Three cowl below). And this super-cool, extra-thick fabric requires a special cast-on. 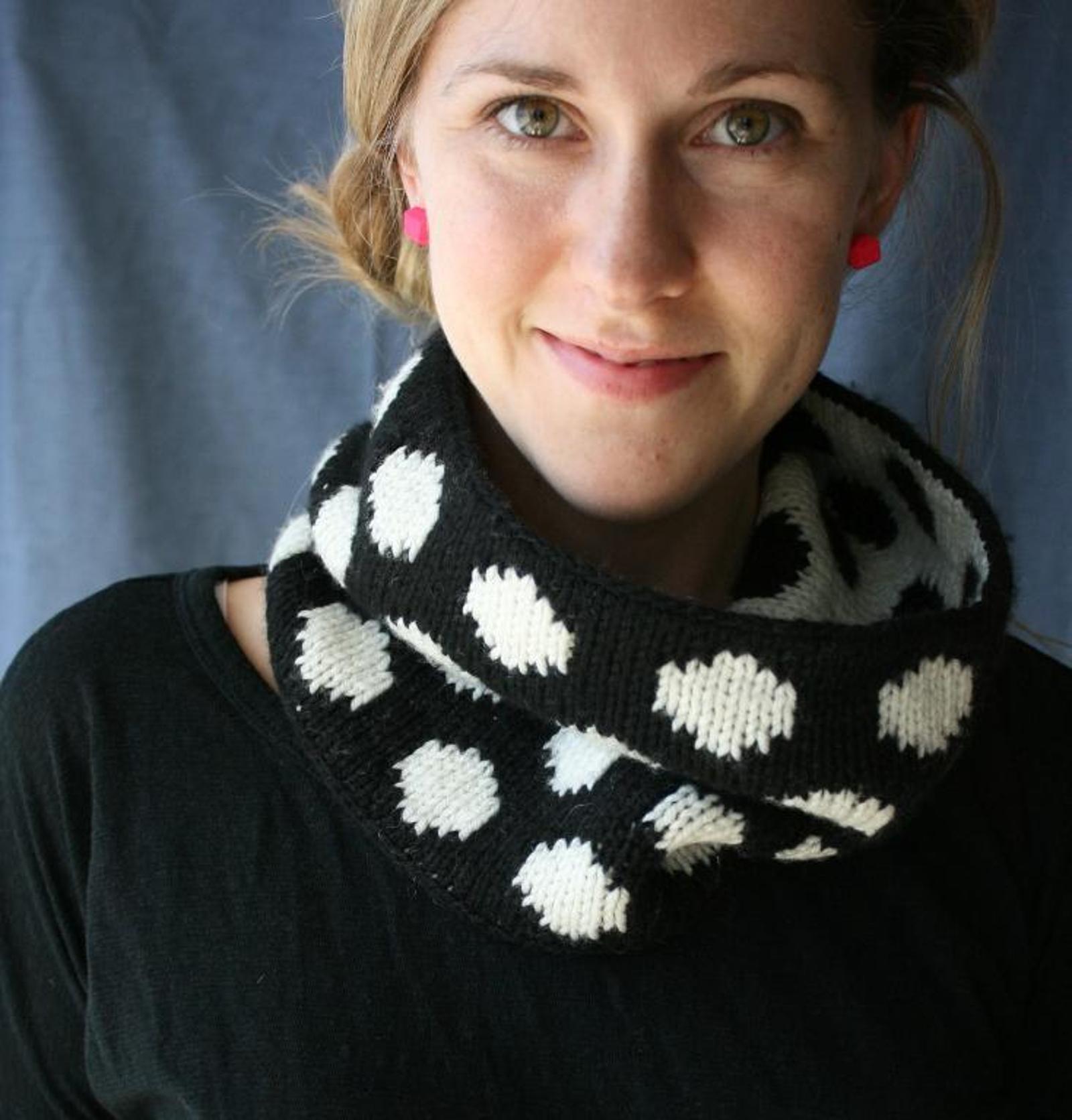 Photo via Craftsy member The Yarniad

When it’s time to cast on for double knitting, there are plenty of options. Here I’ll show you the long-tail double knitting cast-on. This cast on can be used for any two-color knitting technique, including twined knitting, so keep it in your knitting toolbox for other projects, too!

Note: Here’s a review of the long-tail cast-on if you need a refresher.

I have two colors of yarn: one is Sprightly Acrylic Wool Worsted in Misty Purple and the other is Cloudborn Superwash Highland Worsted in Shaela Heather.

Use this variation if: you want the edge of your cast-on to be the same color all the way across.

This variation creates a cast-on where the stitches on your needle are the same color, and the twist at the bottom is a different color. For this tutorial, the cast-on stitches will all be gray. 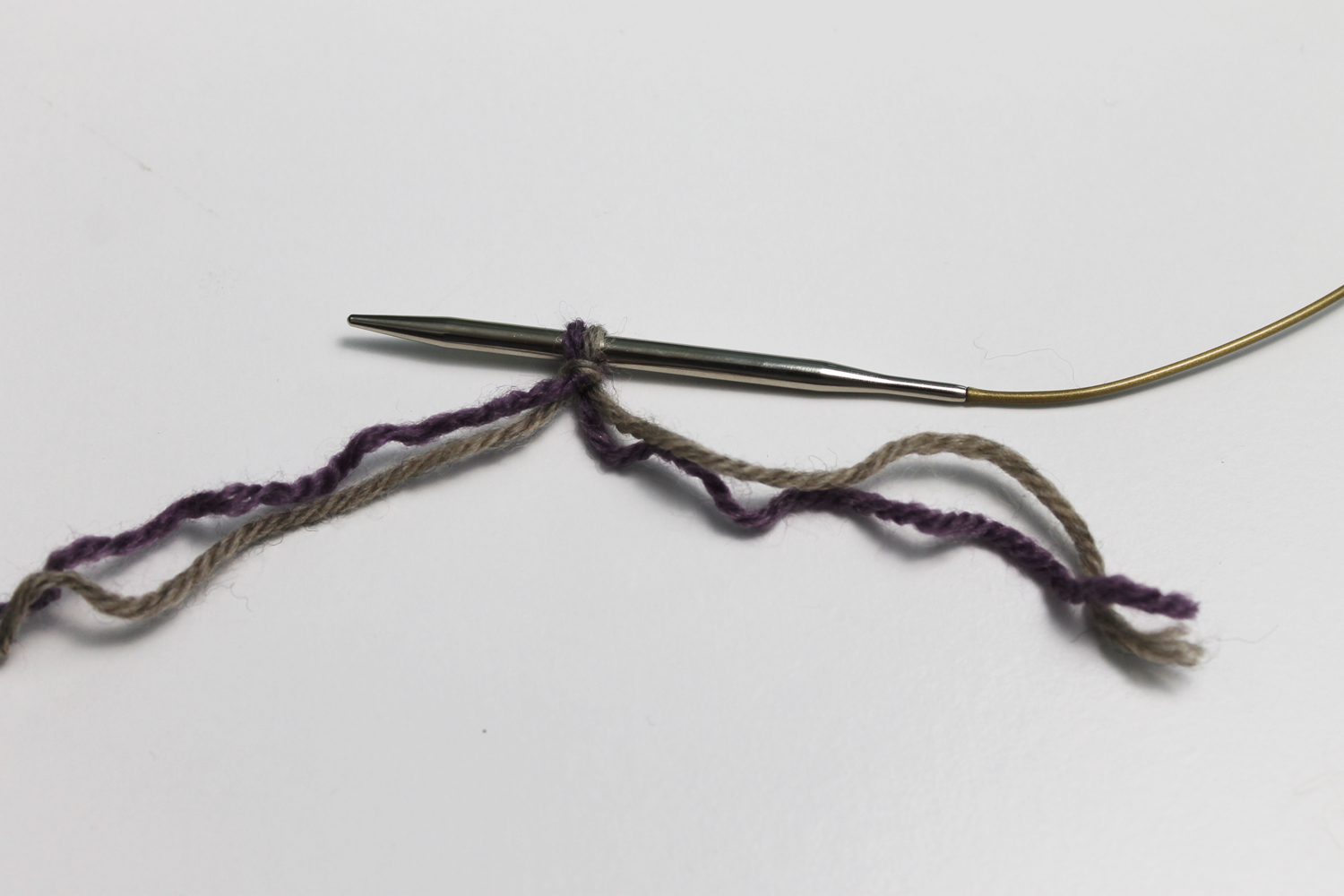 Holding the tails of both yarns together, make a slip knot. Don’t worry about leaving a long tail as you normally would with a long-tail cast on. (You’ll see why later.) 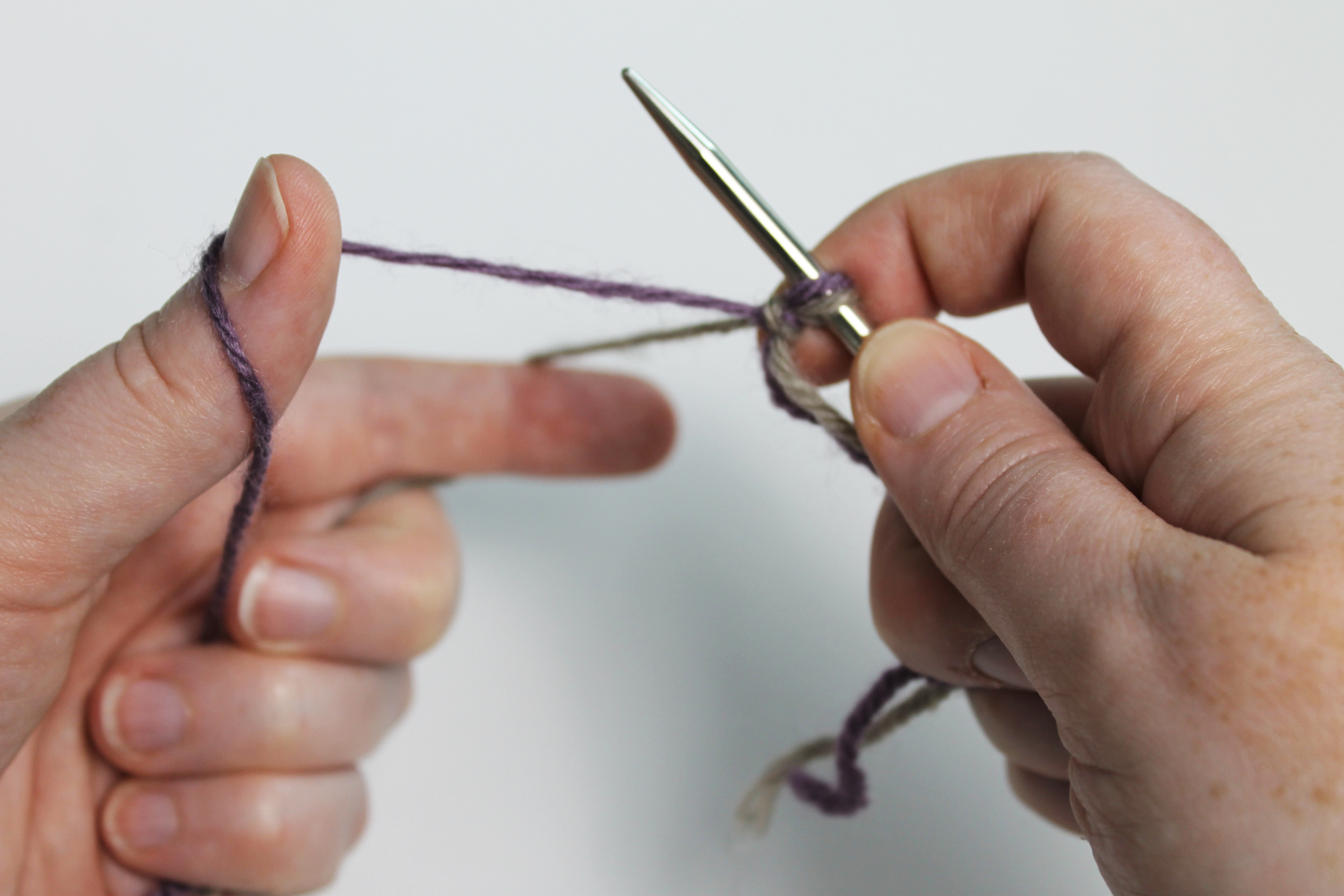 Make a slingshot with the purple yarn closest to you.

Insert the needle under and through the yarn wrapped around your thumb (the purple yarn, in my case). Then catch the gray yarn with the needle and  pull it up onto your needle. 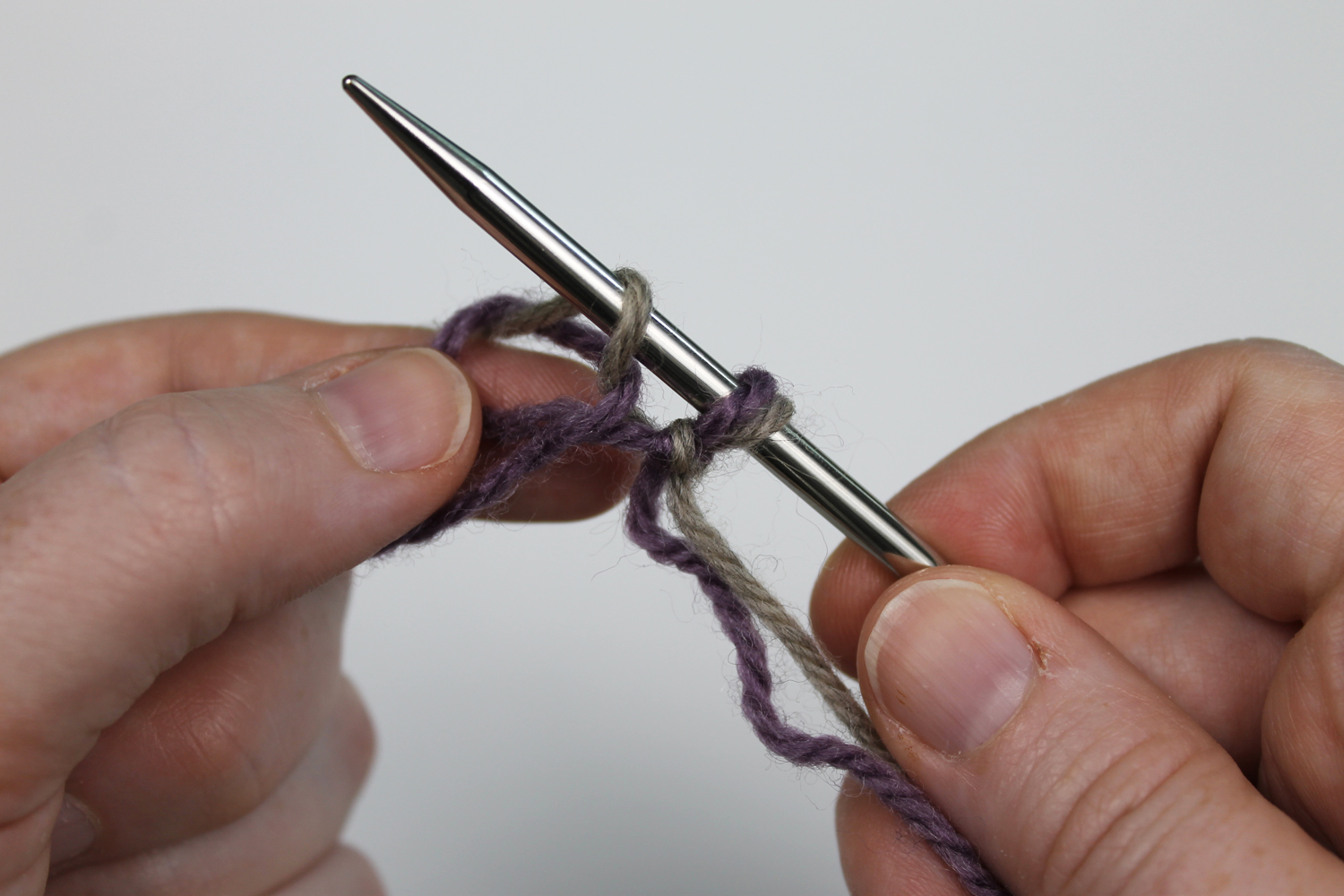 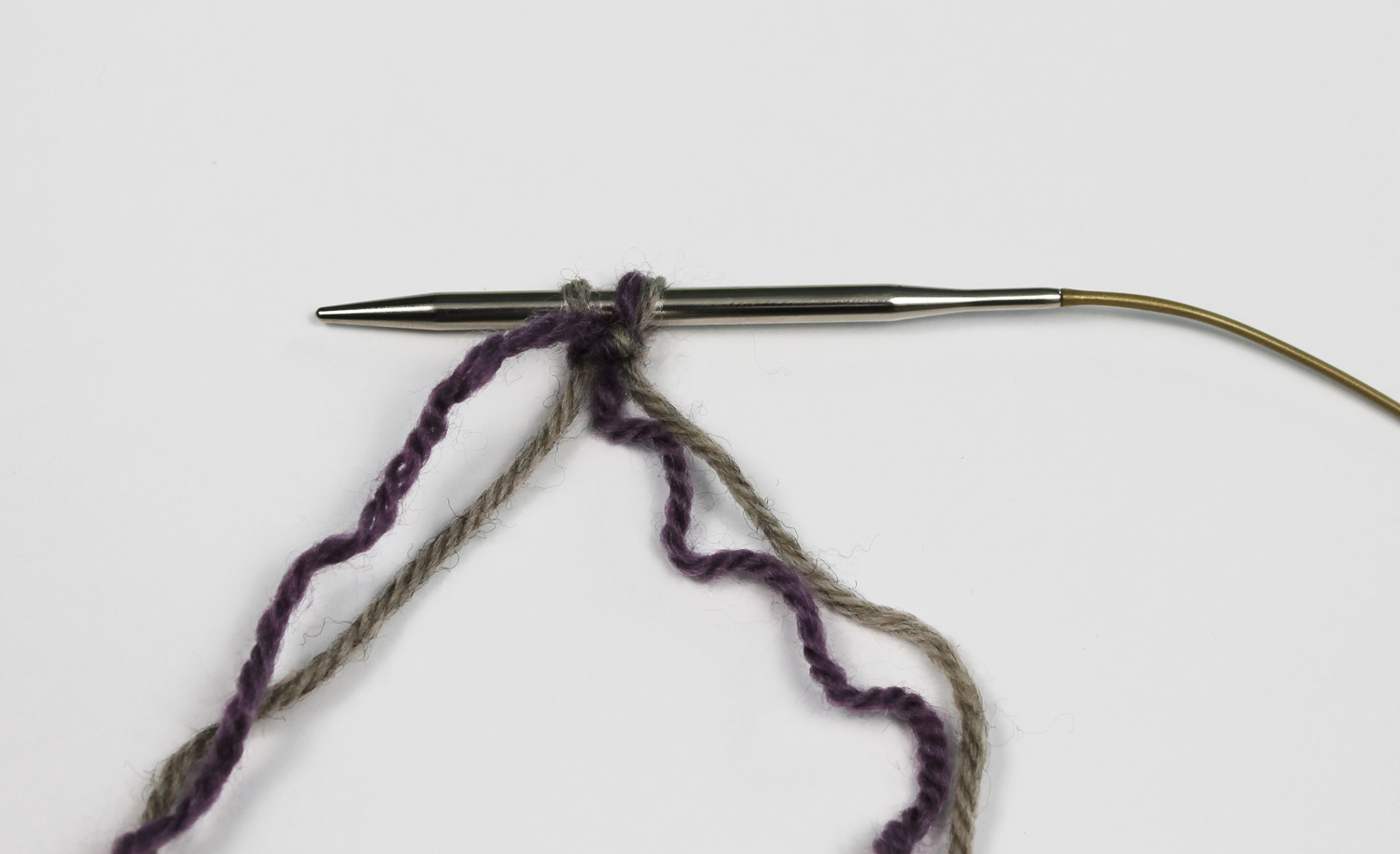 Pull both strands of yarn taut, securing the gray stitch onto the needle. 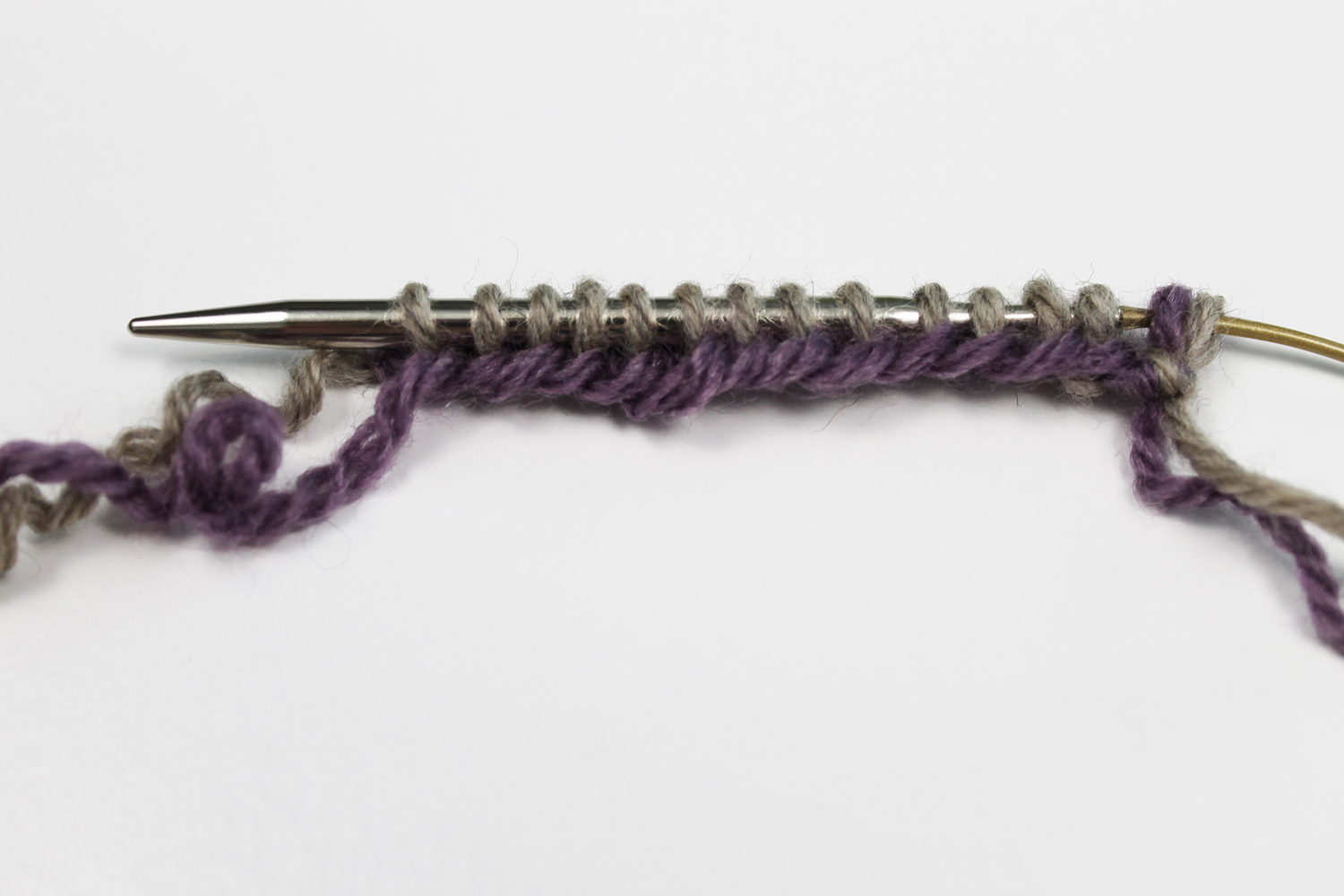 Repeat Steps 2-4 until you’ve cast on the number of stitches you need. Note that you will not count the slip stitch as the first cast-on stitch. In the example above, I have a slip knot + 13 cast-on stitches. 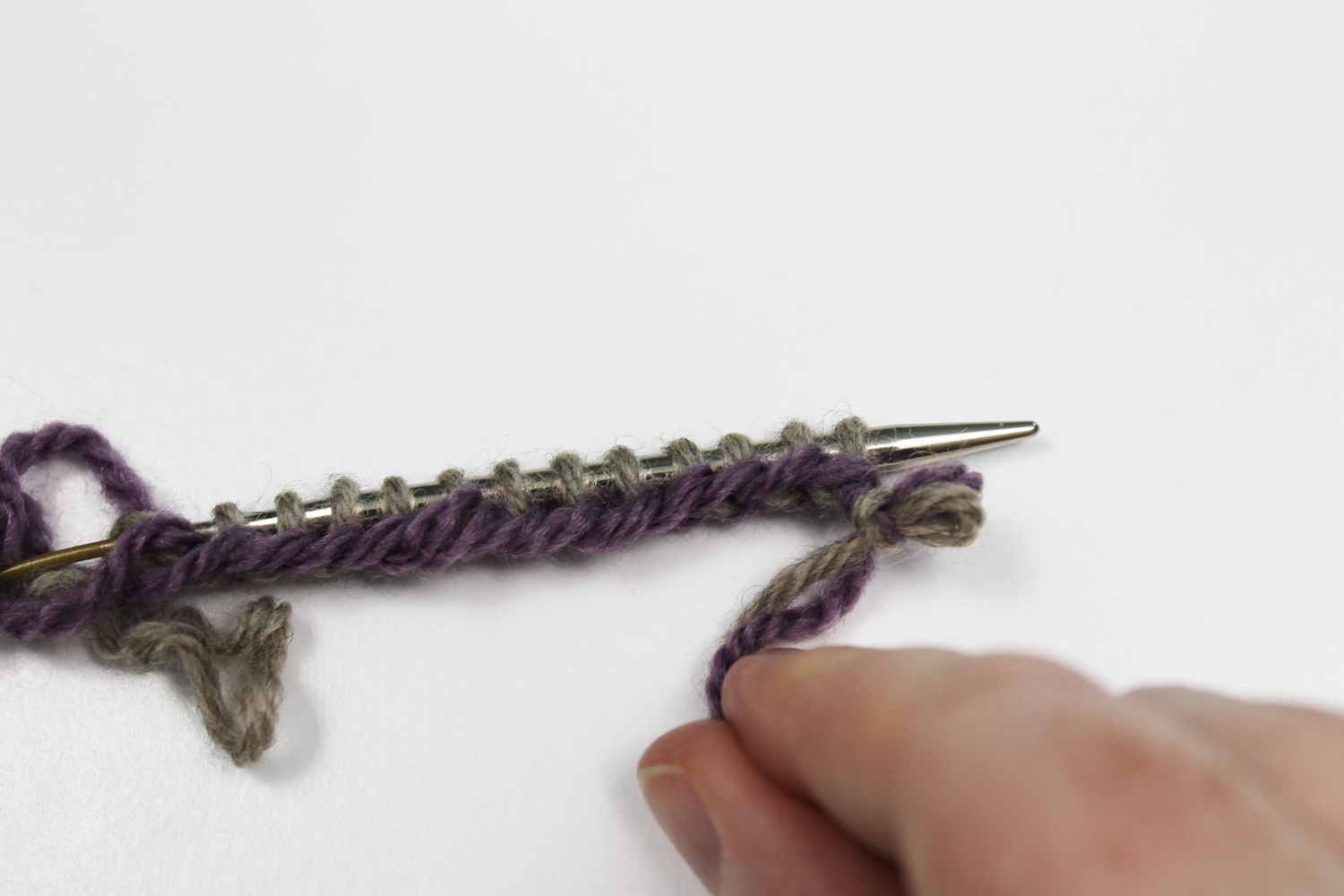 When you have the right number of stitches, remove the slip knot. For this cast-on, the slip knot was just an anchor for getting started. Since the slip knot has two colors on it, you need to remove it.

If you’re using a circular needle like I am, just pull your work so that the slip-knot side of the work is near the tip of the needle. Gently slide the slip knot off the end of the needle, then pull it to remove the knot.

Use this variation if: you want your cast-on stitches to alternate colors and feature both colors in the twist

We’ll build onto our Variation 1 cast on here so you can see the two variations side by side. 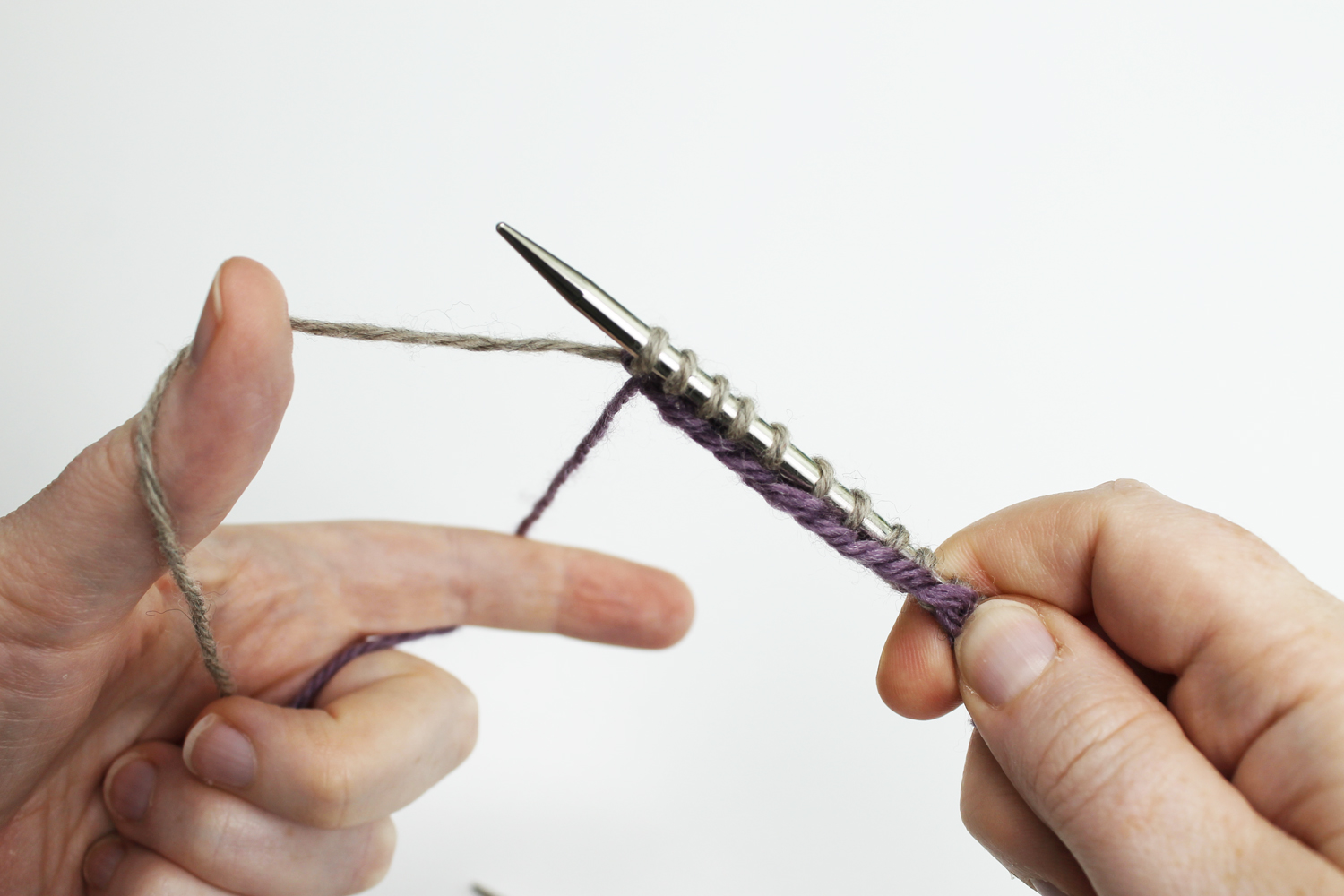 Make a slingshot with the gray yarn closest to you.

Insert the needle under and through the yarn wrapped around your thumb (the gray yarn, in my case). Then catch the purple yarn with the needle, and pull it up onto your needle. 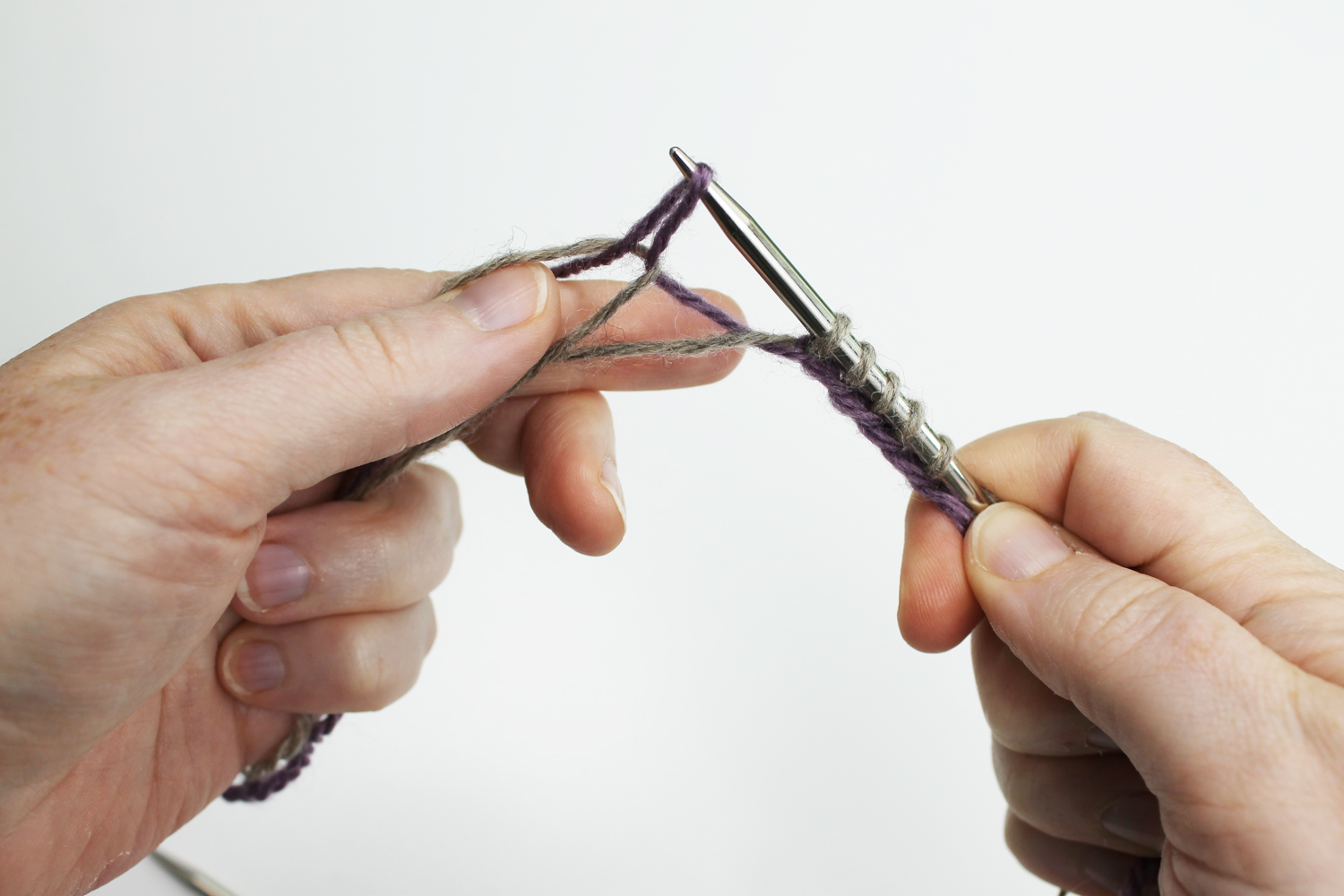 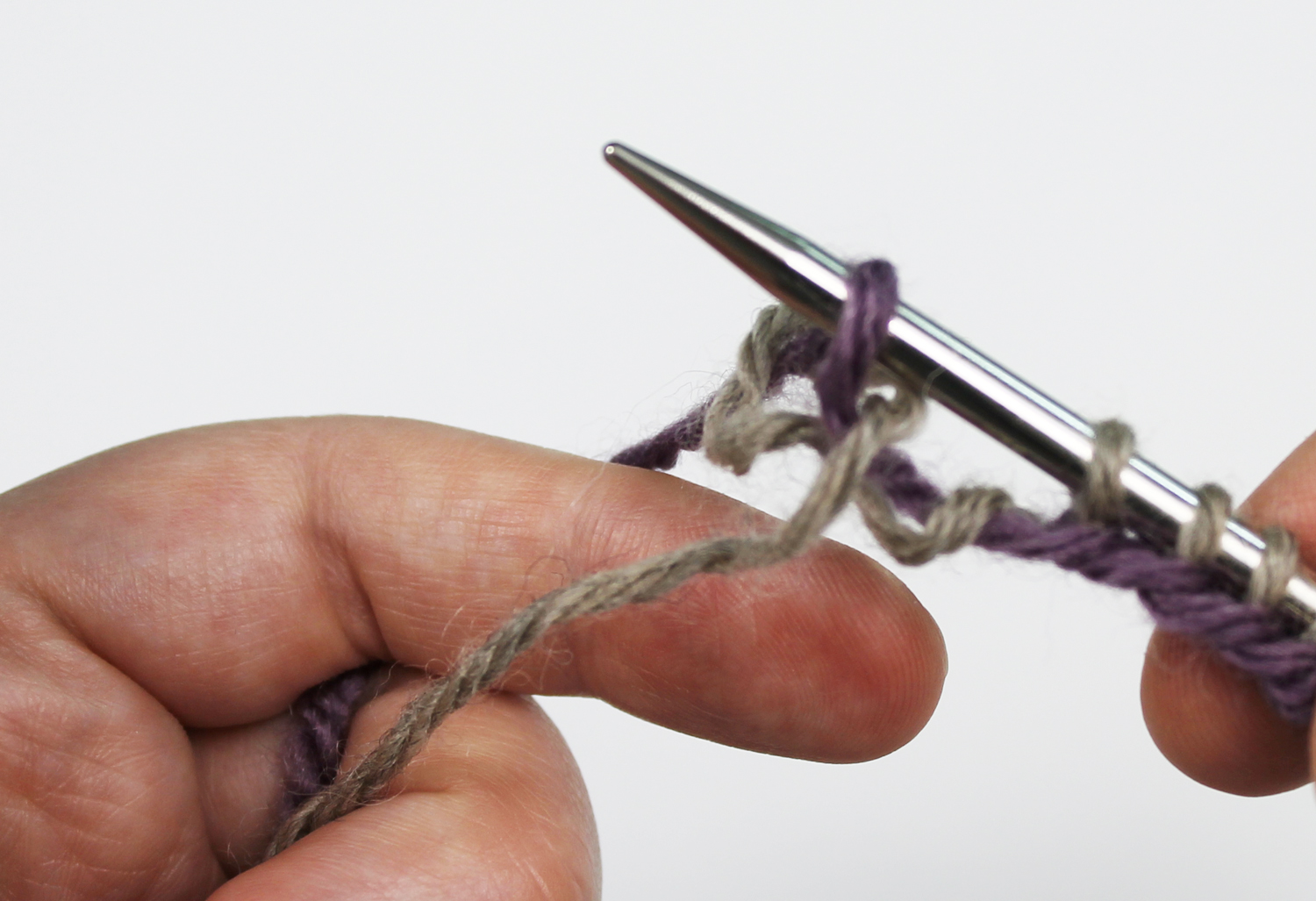 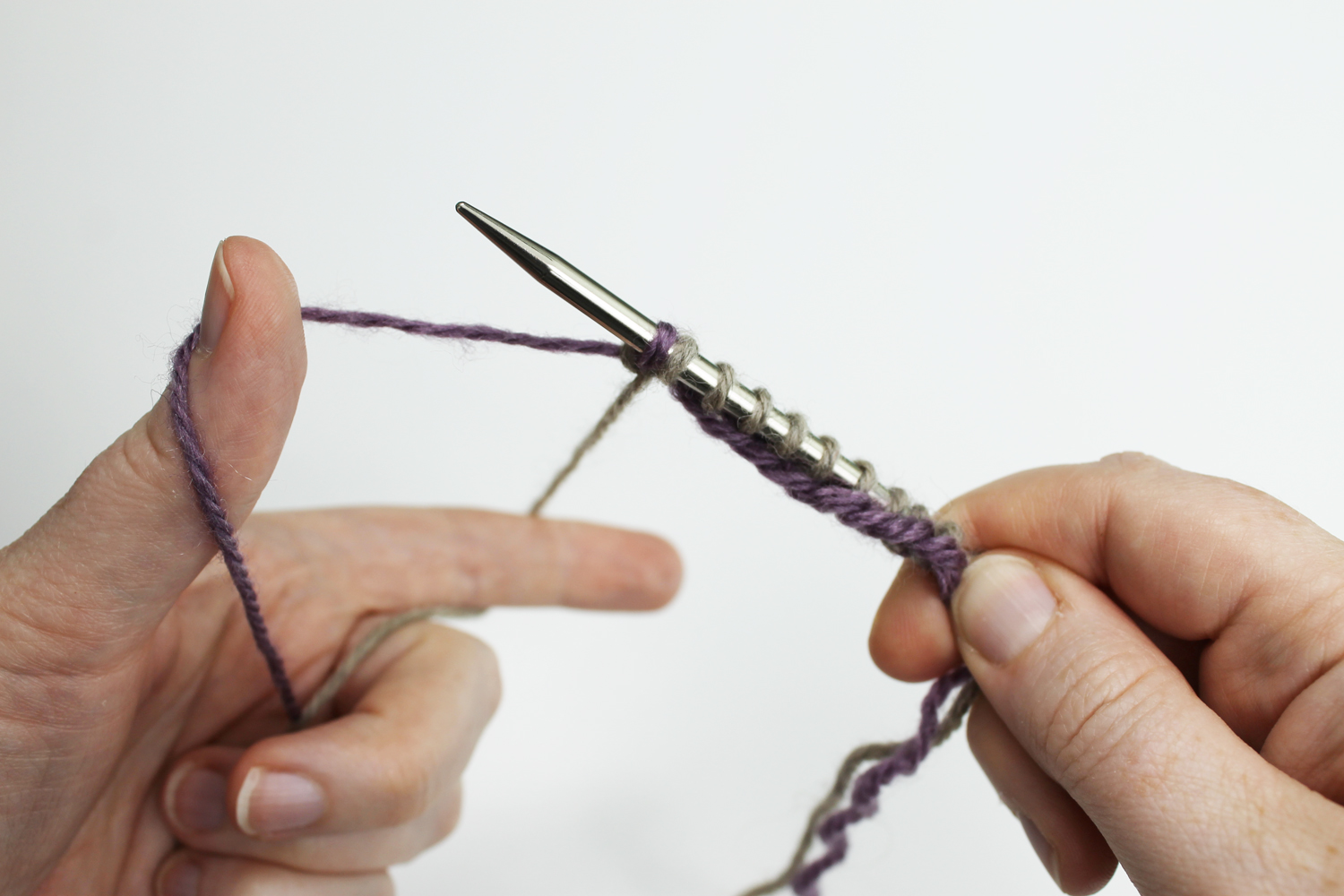 Pull both strands of yarn taut, securing the stitch onto the needle.

Switch the strands of yarn around, this time making a slingshot with the purple yarn closest to you.

Insert the needle under and through the yarn wrapped around your thumb (now the purple yarn). Then catch the gray yarn with the needle and pull it through. 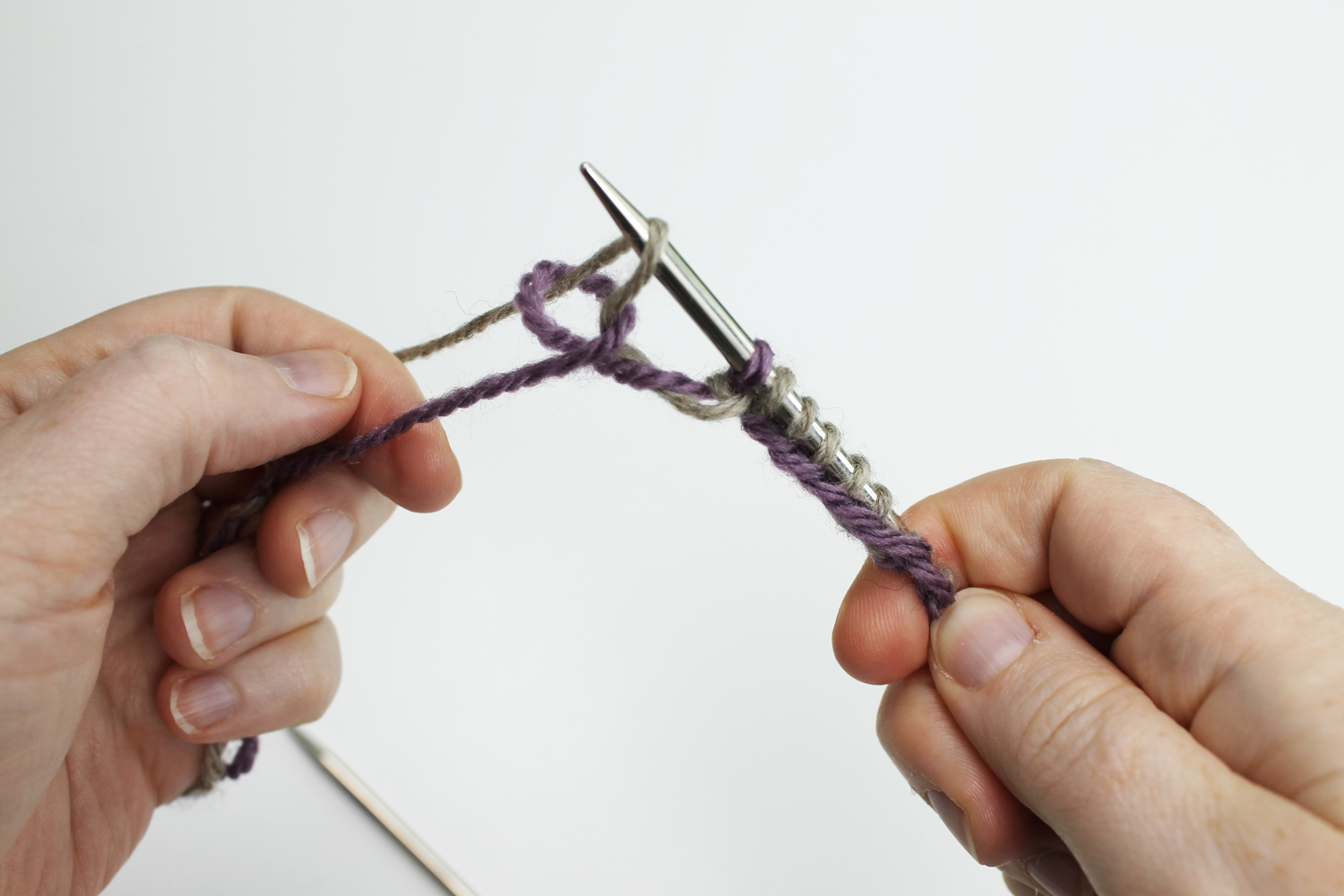 Pull both strands of yarn taut, securing the stitch onto the needle.

Repeat steps 1-6 until you’ve cast on the desired number of stitches. 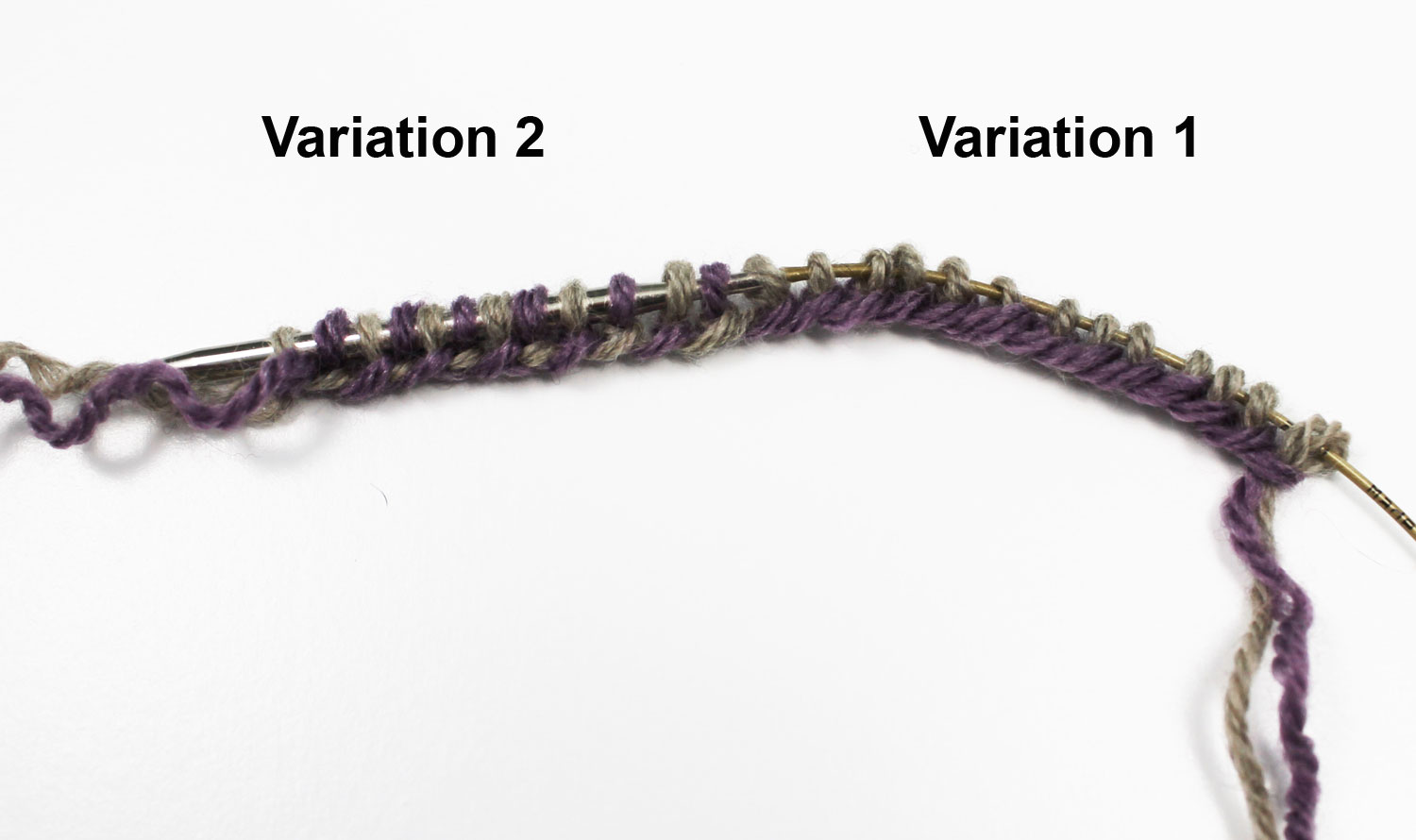 You can see that the variations are pretty similar. Variation 1 creates a cast-on that has the same color of cast-on stitches with a twist that shows off the other color, while Variation 2 alternates colors and creates a neat braided twist on the bottom of the cast-on edge. If your pattern doesn’t specify what to do, use whichever variation you like best!

What kind of cast on do you use for double knitting? If you’ve never tried, do you think you like Variation 1 or Variation 2 the best?

One Response to “Double Knitting Two-Color Cast On: Two Variations”