When I got the brilliant idea to look online for knitting instructions, instead of using a book (which failed me TWICE!), the long tail cast-on was the first technique I found. After all, you NEED to cast on if you want to learn to knit, right? I didn’t think to search for any other methods because I didn’t know there were different ones. In crochet, you just chain and get going! Lucky for me, this cast on was a breeze and soon I was knitting my nights away. I suppose it’s true that your favorite methods are usually the ones you learn first and those are usually the ones your teacher prefers (for the same reason)! The long tail cast-on is my favorite method of casting on a knitting project. 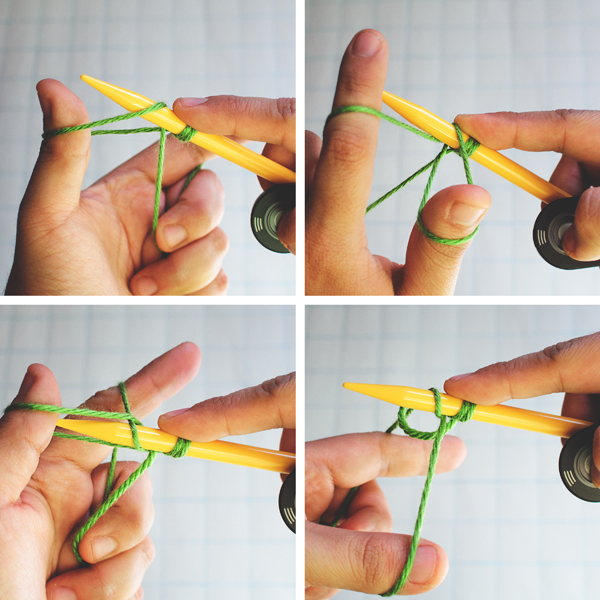 Benefits of the long tail cast-on in knitting:

The long tail cast-on is a swift movement of hands and needle. What you learn to do is actually a backwards loop cast-on AND the first knit row…all at one time! Isn’t that amazing? If you are working stockinette stitch, you simply turn your work and start purling.

This cast on leaves a very neat edge! It’s also quite sturdy and easy to knit from, if you have to. The stretch is decent, but some knitters like to employ even stretchier techniques if they are working something that needs to be stretchy, like a cuff. See also the German twisted cast-on. I have used the long tail cast-on for knitting hats and socks alike and never had a problem.

I think this cast-on is the best choice for continental knitting, as the yarn is draped/held similarly. It is also commonly used when knitting cables. Once you get the first stitches on, your hands memorize the movements and casting on will go quickly, even with large numbers of stitches.

Things to consider before starting:

The long tail should be about three times the width of your desired cast-on edge. Your yardage may vary, so it’s best to practice and see how much you need for X number of stitches, then use that length to determine the size of the tail you will need when casting on for your project.

If you are not a fan of the slipknot, you can start by simply draping the yarn over the needle and grasping the yarn in your palm with your fingers between the strands, as shown in the photo. You will have two loops over the needle for the first stitch and some people will knit them together as one on the return row (or in the first round).

Even though the first row is technically a knit row, you can ignore it if you have a rib to knit. The look of the long tail cast-on is nice enough to not really interfere with the look of the rib.

Start with slip knot on one needle. Drape the tail end + working end of yarn on the outside of your index finger and thumb, then bring the needle between your fingers, as shown below. Grasp the loose ends to achieve the correct tension. 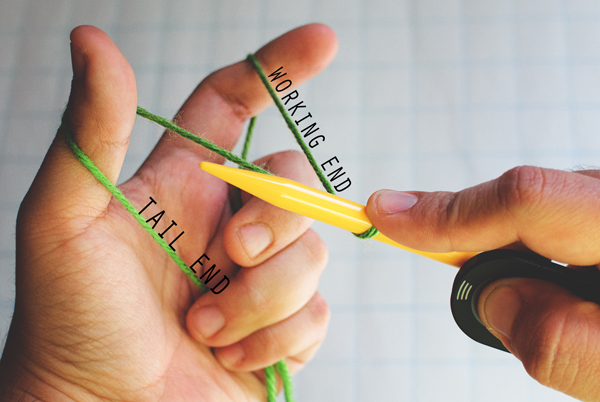 With the needle, pick up the tail end (strand on the outside of your thumb, labeled above) and pull up the loop: 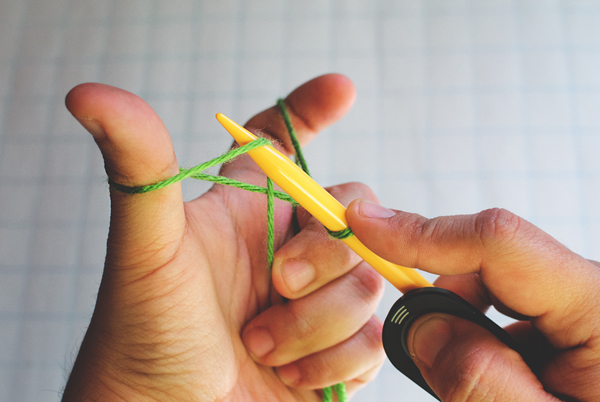 Keeping that loop on your needle, bring the tip around the working end (strand on the inside of your index finger, labeled in Photo 1) and pull a loop up and THROUGH the loop you pulled up from the tail end:

Drop the tail end loop off your needle and finger in one movement and use your thumb to tighten the bottom of the stitch: 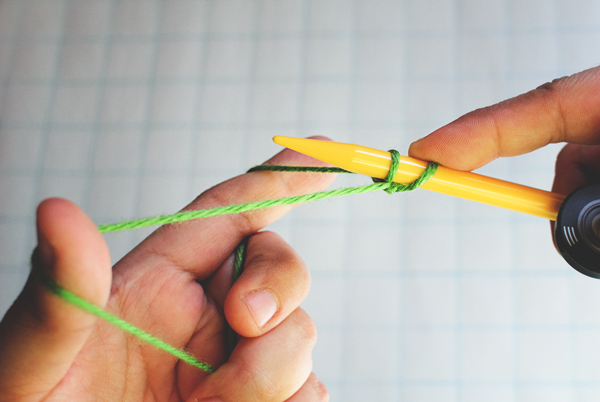 I have illustrated the steps again below, but notice how I move both my hands. I find the rhythm easy to keep if I rock both hands back and forth. Instead of moving my needle around to grab the loop from the working end, I tilt my hand back and bring my index finger around and place the loop on it (top right photo), then use the needle to pull it through the tail end loop (bottom left photo). I try not to let go of the tail ends, but sometimes you need to adjust them in your palm.

The long tail cast-on is much easier to understand in motion. I made this animated gif for you:

You can also explore this step further in the Bluprint classes Improve Your Knitting and Explorations in Cables, both taught by famed knitting instructor Patty Lyons.

What is your favorite method of casting on? Is it the first you learned? Is it the one you teach new knitters?