Copic markers can seem a bit intimidating at first glance. What do all of those letters and numbers mean? Below you’ll find a simple breakdown to help in understanding the Copic code. 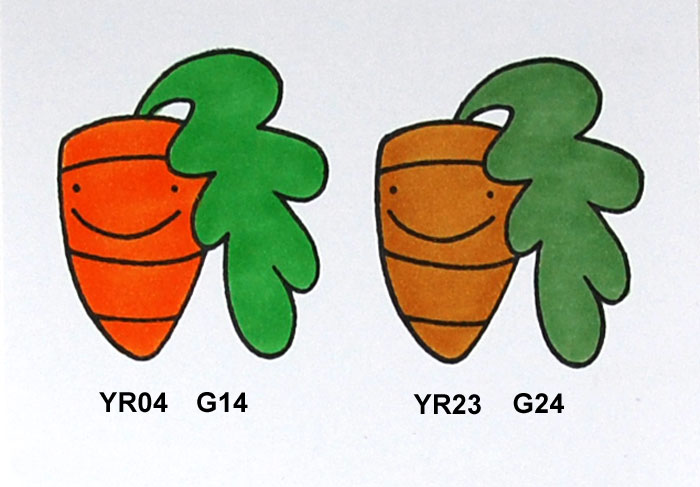 The numbers following the letter are broken down into two parts with each digit representing a different classification or characteristic of the marker color. For that reason, it is easier to understand the color code if the numbers are viewed individually rather than together. For example, think of G14 as G-one-four or YR23 as YR-two-three.

In the photo above, I used YR04 (YR-zero-four) and G14 (G-one-four) to color the carrot on the left. With low first numbers, you can see that the colors are bright and vibrant. By increasing the first numbers, YR23 (YR-two-three) and G24 (G-two-four) as used to color the carrot on the right, the colors become more muted or less bright. There can be a significant change in saturation by increasing the first number by just one or two numbers. 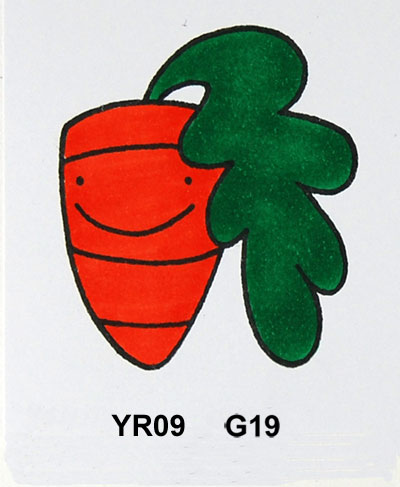 The second number indicates brightness or color shade. Lower numbers are lighter shades while the higher numbers are darker. In the photo above, I’ve increased the second number to 9 (using YR-zero-nine and G-one-nine). The colors are still very bright and pure but they are a darker shade. 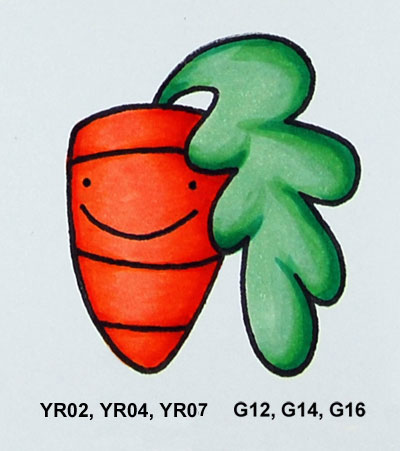 Within each color family there are smaller sequences of numbers. For example, in the photo above, I used YR02, YR04 and YR07 for the carrot and G12, G14 and G16 for the leaves. The saturation (or first numbers) are the same (zero for the carrot, one for the leaves) and the second numbers are two to four digits apart.

As a general rule, by keeping the color family (the letter) and the first digit (saturation) the same, you can be assured of a natural blend by increasing the second number by increments of two to four. Keep in mind this is not a “hard fast” rule as many colors can be blended. Find those you like and keep notes for future reference.

Note that because brown can be made up of so many different colors, the E group, or earth hues, do not exactly follow Copic code. There are, however, different natural blending groups, each with its own touch of red, gray, peach or green, providing many options for coloring different shades of brown.

For a great visual reference in choosing blending groups, check out the Copic color wheel, as published by Imagination International, Inc.

You might also enjoy our posts on basic coloring and shading with Copic markers and how to blend Copic markers.