This week’s tatting post is brought to you by Diane Caemartori, a tatter with seven years of experience in the field!

I love to tat, and I am addicted to collecting tatting shuttles! In the twenty plus years that I’ve been tatting, I have read quite a few discussions regarding the types of tatting shuttles, and which style is the best to use. The short answer is, the style that suits you. What are the styles of shuttles? I guess that could spark another discussion.

For now, let’s just look at what I consider to be the three basic styles of shuttles: flat, post, and bobbin. 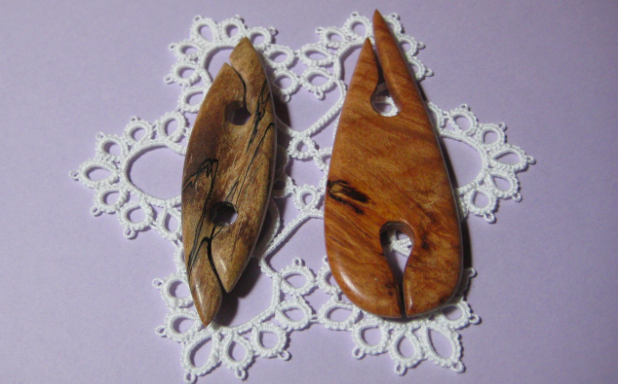 Here are two examples of flat shuttles from my collection.

As you can see, the slits in the two ends allow the thread to be wound around a large area in the center. One of the advantages to using this style of shuttle is that a tremendous amount of thread can be wound on it. One disadvantage is that the thread is constantly exposed to the oils on your skin as well as the dust in the air. When using this type of shuttle, I turn the shuttle sideways when creating the double stitch so that the thread glides along the smooth, narrow edge of the shuttle, rather than passing across the thread. 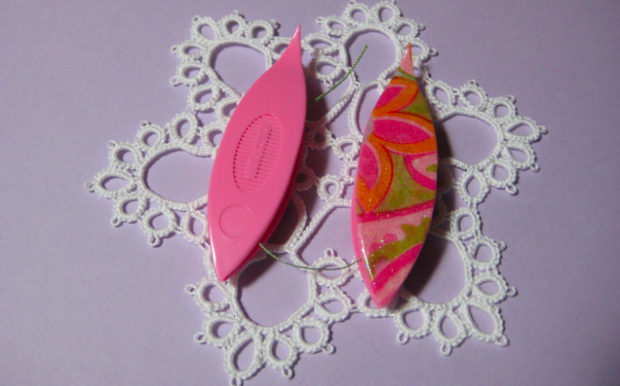 These are readily available in a variety of colors and sizes. These two shuttles are made by Clover. I decorated the shuttle on the right using a paper napkin, glitter, and Mod Podge. The thread is wound around a post that holds the top and bottom of the shuttle together. These are a great go-to shuttle for me, because they fit my hand perfectly. The pick tip on the end is great for joining to picots or un-tatting mistakes. 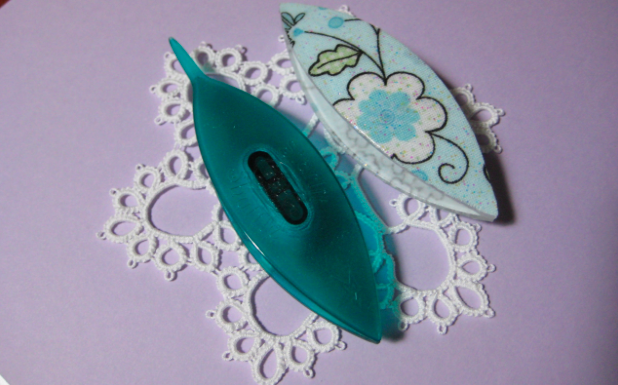 Sometimes I prefer to use a larger post shuttle, particularly if I’m tatting a small doily using the continuous thread method (CTM). These Starlit shuttles from Handy Hands are available with and without a pick. They hold almost twice as much thread as the Clover shuttles, and like the Clovers, they are a lot of fun to decorate! I used fabric, glitter, and Mod Podge to decorate the shuttle on the right. 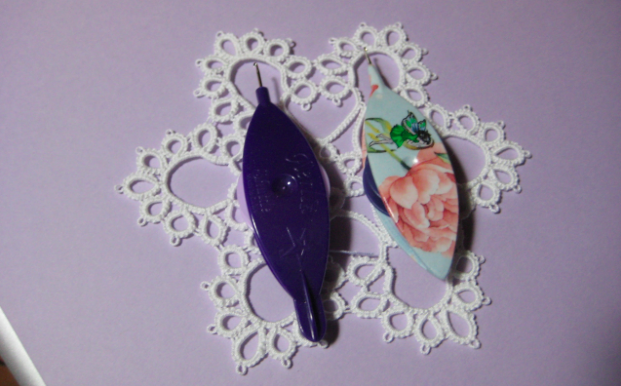 Bobbin shuttles are wonderful because they have a crochet hook built into the end of the shuttle, making it very simple to join picots.

Searching for shuttles can be a lot of fun! Finding shuttles in retail stores can be a challenge. I have found them at Hobby Lobby, Jo-Ann Fabrics, and Michaels. Be sure to look on eBay and Etsy for hand-crafted, vintage, and one-of-a-kind shuttles. There are several suppliers online. Just do a search for tatting shuttles, and you will be amazed at the number of shuttles you can find! 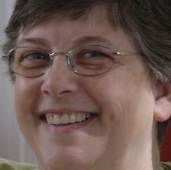 Written by Diane Cademartori: An elementary school librarian by day, and a tatter by night. Diane first became interested in tatting when she was given a tatted cross in high school. It took her twenty years to figure out how to tat. Then, when her friend Denise lent her a video, she was able to learn in about twenty minutes. She still dabbles in other fiber crafts, but tatting has been her focus for the past seven years.

What types of shuttles do you prefer?

3 Responses to “The Perfect Tatting Shuttle?”