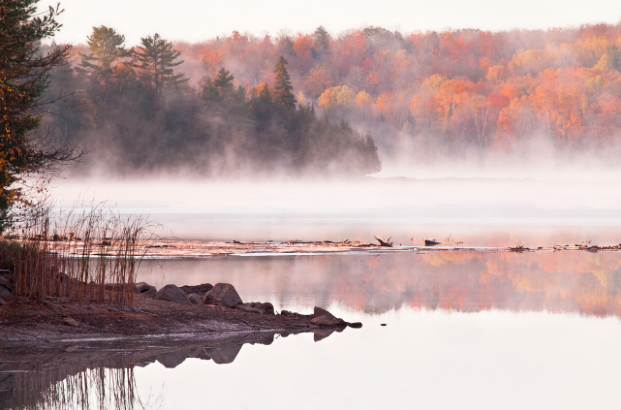 I love to be out with my camera on foggy mornings, especially in the fall and early winter. The lure of the atmosphere and diffused light really draws me out of the house. I love to exploit the landscape while it is covered in fog to evoke mood.

But be warned, fog is that one element that can either set the tone for a beautiful atmosphere in your photos, or that can very easily make your photos look white washed and dull– void of color and without definition.

There are varying types of fog that you will encounter out on a photo shoot. Some will be visible over water, some will form when the sun heats up a surface, and other types only come out at night. Some fog will be simple to photograph because it has minimal impact on exposure, while other fog will engulf a scene making it a nightmare. Fog can happen at any time of year and is classified according to how it is formed. Here is a rundown on the types of fog.

Sometimes referred to as simply ground fog, radiation fog and advection fog form because of the change in temperature between the earth and the air above it. It occurs when the winds are too calm to mix the layers of air near the ground.

Radiation fog occurs frequently in hilly and mountainous areas. This type of fog is formed by the cooling of land after sunset by thermal radiation in calm conditions with clear sky.

Advection fog is different as it is sometimes referred to as sea fog. This fog forms when warm air over the water condenses as it drifts over colder air currents. It also causes fog in coastal areas as it flows over colder air lying on the ground that has cooled down due to radiation.

These types of fog can be very dense and make visibility extremely poor. Radiation fog will usually evaporate during the day when the heat of the sun brings the air above the dew point temperature. Advection fog however, may form at any time and can hang around all day.

Photographing this type of fog usually will have you immersed in the bank of fog. It will engulf a scene. Taking photographs can be tricky. But finding the outer layers, or breaks inside the fog bank are the key to success here.

This fog occurs when cold, dry air travels over warm water or land that is moist and warm. When water in the warm and moist water or land evaporates, it rises and mixes with the cold air layer. The evaporated water then cools down and condenses to form fog.

This type of fog can be either be extremely thick and can contain characteristics that allow it to remain as a defined cloud over a surface, or, on a minor scale, can appear as strands of raising smoke coming off a still pond.

This fog usually happens during the winter in the mountains. Light winds push the moist air lying on the ground up the slopes until it reaches a saturation point and condenses. In most cases, the fog forms on the lower slopes of the mountains and leaves the peaks exposed. This can create awe inspiring images that make mountain peaks rise out of nowhere.

With freezing fog, the water droplets contained in the fog become super cooled. As a result, the droplets remain as a liquid until they come into contact with an object. It then it freezes on contact. It is similar to freezing rain but there is no obvious precipitation.

Ice fog is only found in the Arctic. In the extremely cold air, small ice crystals become suspended.

So now that you know the most encountered types of fog, how should you capture it?

If you are planning on shooting in the fog, the best time to capture this natural occurrence is during the evening or very early in the morning, just prior to sunset and after sunrise. To increase your chances of finding fog, make a mental note that it is a lot more common near water.

Shooting photos while in fog is obviously a lot different than going for a day time stroll in the park with your camera to photograph the kids. Your subject matters are not as clear or defined and color is minimized. The benefit of shooting in the fog is that it can diffuse the light source and appear that the light is coming from all angles. The bad thing about this is that is reduces the contrast of photos dramatically.

Fog can be used as a very powerful effect if you can emphasize the lighting, depth and outline of your subject. It’s these things that I search for. They can make the whole scene feel beautifully mysterious and give your photos a professional edge.

There are no set rules when shooting during dense fog. Remember, you’re the photographer and photography is a creative form or art; so how you use the fog is entirely up to you. It is however a good practice to try and get some of the subject matter closer to your camera. This will give the image a pop of colour, and create a focal point because of the contrast and definition.

Sometimes the subject matter can be made into nothing but a husk of a silhouette. When taking photographs in the fog, I always ensure I first expose for the fog itself is rather than the subject. I then reverse that, and expose for a subject. When at home I compare the two images to see what artistic message I wish to convey. Heck, sometimes I combine the images in Photoshop and use the exposure on the subject and the one on the fog to create one single image.

With fog, the light source is much more diffused than normal. This is due to the water droplets which have formed the fog. This softens the light and at the same time makes streaks of light noticeable from the intensity of many light sources. A good example for you to think about is this: picture a photograph of a forest in early morning light where the picture is taken in the course of the light and the light is streaking through the trees.

When taking photos in the fog, you want to make the light rays show off a varying quality, that will give your finished photo the atmosphere you want. To do this, you need to plan out your shooting point. The rays of light will become most visible when you’re shooting near, although not directly at the source. This will ensure the abundant lights will be bright, streaking and split off from all the dark scenes.

Patience and practice make the difference

When shooting in the fog, timing is essential to capture a great photo. Envisioning, moving or waiting for the perfect light will greatly impact the appearance of the light in the final photo. The layer of the fog tends to naturally adjust with time so being prepared at all times is a must. You need to understand your position in relation to the light source and be prepared to take photos of the ever changing landscape. A scene that may present itself one moment will be covered in fog the next.

There are two trains of thought. Know the scene you want to capture and wait for the fog to adjust to get the photo you want. Or, physically move with the breaks in the fog and photograph what that break in the fog presents as it moves across the landscape.

Another thing to remember is that fog may reflect light towards the camera. This will fool the light meter causing your images to be underexposed. To overcome this, use the camera’s built-in exposure compensation with a value of +1/2 to a +2. When you are out you can experiment until you get the proper value, or bracket your images and take 3 or 5 images of different exposures. This will ensure you get the proper exposure.

I hope I gave you some information that will be useful to your next fog outing. As with any photography, practice makes perfect. Just get out there and try it. You might be amazed at what you capture!