Sewing with selvages is a fairly recent trend in quilting. It wasn’t until the past decade or so that actually using the selvage for quilt patterns was considered acceptable. But, what’s the deal with using special scraps? Why has it become so popular all of the sudden? 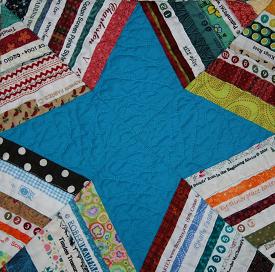 Looking for creative ways to repurpose your scraps? Then you may also be interested in downloading our free guide “Save Those Scraps! A Scrap Quilting Handbook,” which is stuffed to the brim with creative ways to use your leftover fabric!

By definition, the selvage is the area at the edge of the printed fabric that contains the information about the designer, the manufacturer and the colors used in the fabric’s printing. It is usually less than one inch wide, and because it is found at the edge of the fabric, the density of weave can vary from the rest of the bolt. For that reason alone, the selvage is often considered “unusable” in the traditional sense of quilt making.

As quilters, we want to use as much of our beautiful fabrics that we can. If we can’t use it now, we save it for later. At some point, a quilter looked at her pile of selvages and thought…I’m going to use those for a quilt! This was clearly breaking the rules. Those cut off edges were supposed to be difficult to work with. But, they had such pretty writing and color swatches on them that the temptation was just too much. 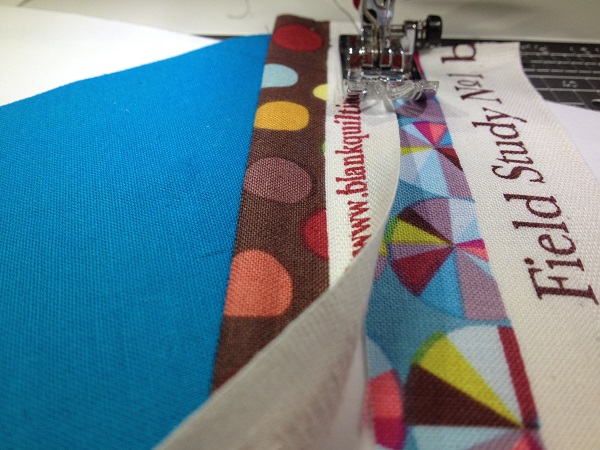 Selvages can’t be sewn or pieced like traditional patchwork.

If a quarter inch seam were used in the piecing of selvages, the lovely print and designs would be lost in the seam allowance. A new method of sewing these together had to be devised. Why not top stitch one onto the next? The selvage edge will not ravel or fray because it is woven to prevent that. It will not stretch either. So, the edge can be left exposed without any fear of it coming undone or pulling apart.

The technique used for sewing selvages is not difficult.

There are many places to see tutorials or videos on how to sew with selvages. There are even entire blogs and websites dedicated to the sewing, quilting and sharing of selvage techniques and ideas. Once a quilter starts sewing with selvages, the possibilities multiply.

Any quilt that is made of strips or strings can be made with selvages.

Sewing the selvages together is very much like string piecing, or strip piecing. One is basically making a piece of fabric from a collection of selvages. Sewing them together can be done with or without a foundation. It is truly a matter of preference only. Some quilters prefer using a paper foundation for stability, others prefer not to have to remove the paper later. Shortening the stitch length on the machine will make removing the paper easier, as it pierces the paper, allowing it to tear free with little resistance.

Saving selvages is very simple, but there are a few things to remember.

Varying the widths of the amount of fabric left will add interest and variety to your quilt. The printed area will add color to what is mostly white selvages pieces.

I also like to save the pieces of the selvage that have the pretty print or design on them. I rarely use the areas that have nothing printed on them. Being careful to use only the parts with letters or designs makes the quilt more interesting.

Fabric designers are now adding flair to the selvage.

What once was a completely utilitarian edge to the bolt is now another design opportunity. Many designers and manufacturers are making an extra effort to add sparkle to their selvages. Next time you are in a fabric store, take a look. The printed information is often provided in a beautiful or colorful font.

The color swatches that were once just small circles can now be found in a variety of shapes and sizes. Some designers have their own logo added, and some write special messages or sentiments. It is now seen as one more way to add personality to a bolt of fabric.

Stop! Don’t throw that selvage in the trash!

Save it for later, you’ll be surprised how quickly the collection will grow. And if you choose not to use them, surely one of your quilting friends will want them. Remember, next time you see a pattern that uses strips or strings, ask yourself: How would this quilt look make with selvages?

Do you use selvages for quilting? If so, what’s your favorite way to repurpose this fabric leftovers?