Knowing where to start with patternmaking can be overwhelming, as you might not know where exactly to begin. But for the moment, put that aside, because the important detail is actually starting! As with when you were learning any other new skill, do not worry too much at first about being perfect or getting everything right.

Take these top tips to get your start in patternmaking! 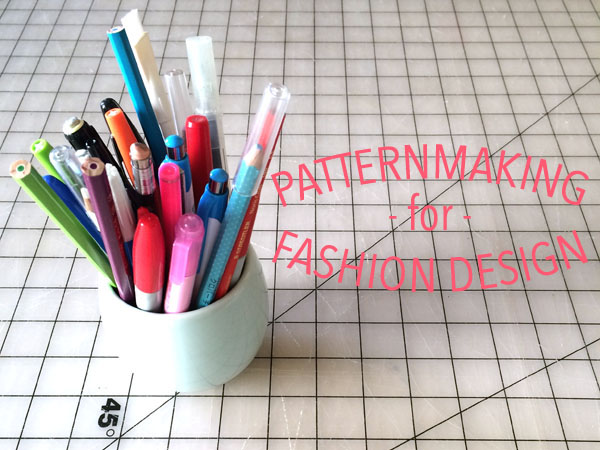 From learning how to make a dress pattern to drafting necklines, these tips will help you get started. With a little help and some expert tricks, you’ll be on your way to designing pieces you thought you could only dream of! 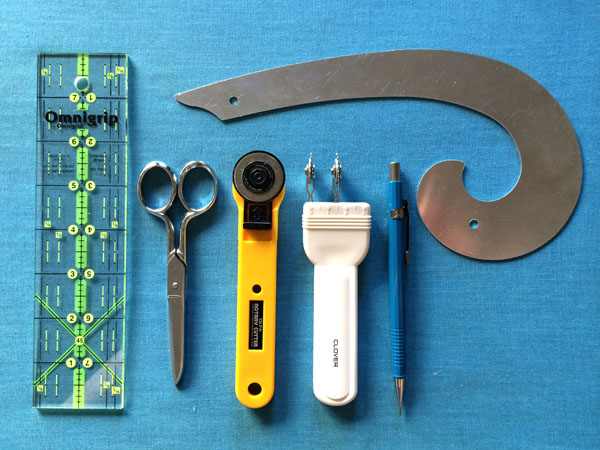 Just like cooking, it’s hard to do the right job without the right tool. Think about your blender: It’s hard to blend anything without a blender, right? Some tools can be substituted with a similar item, but many tools have a singular and important task that only it alone can achieve. Same goes with patternmaking. There are many tools that will make your life easier so it’s worth while to invest in some quality items to help yourself out. Pictured above are some of the key tools to buy for patternmaking. From left to right, are some of my favorites: 1- clear ruler, 2- small 5″ scissors, 3- rotary cutter, 4- a seam allowance marker, 5- a mechanical pencil, and 6- a French curve. All of these are critical in patternmaking. In addition to these, I would suggest getting some pattern paper and some manila oak tag paper so you can draft directly onto the paper, then transfer it to manila oak tag paper when it’s finalized. 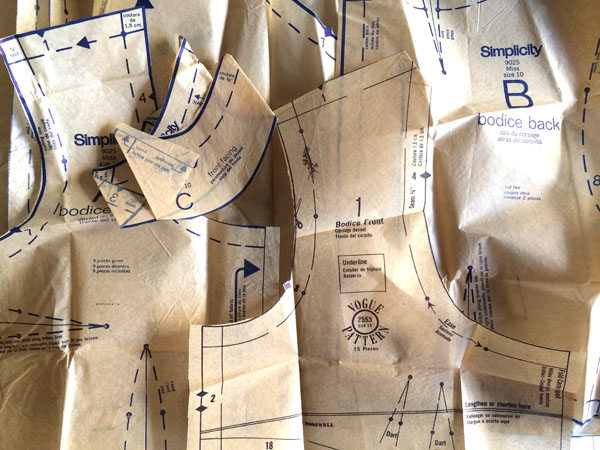 A great way to gain understanding on how patterns are made is to study existing sewing patterns. If you were going to learn how to build cars, presumably you’ve looked under the hood of a car before, right? And you’ve also probably driven a time or too as well! Same goes with sewing patterns. Buy a few and study them. How are they shaped? How do the curves flow and change as they move around the body? Look at the markings on the patterns and figure out what they are for and why they are important. I have patterns that go from present day all the way back to the 1920’s, and they are so different as they change with the times, with styles, and with “standard” body sizes. Educate yourself as much as you can about the thing you intend to make yourself. 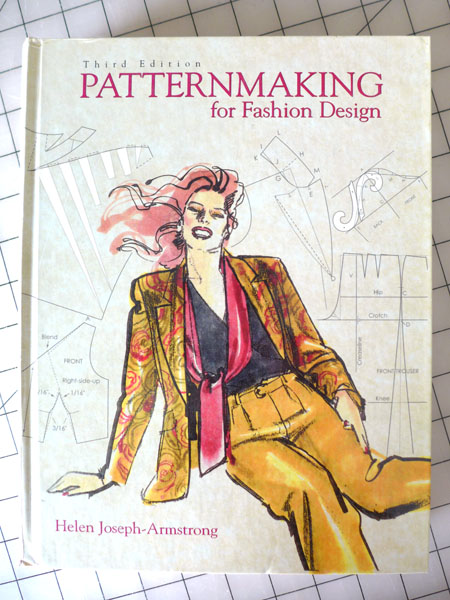 Without question, some of the best information out there is in quality text books. My favorites are Patternmaking for Fashion Design (pictured above) and Draping for Apparel Design (pictured below), both written by the brilliant Helen Joseph-Armstrong. Most of the patternmakers I know agree with me that these are some of the best and most comprehensive books on the market. They are books that are used by both the independent patternmaker as well as the college student learning the art in a classroom setting. 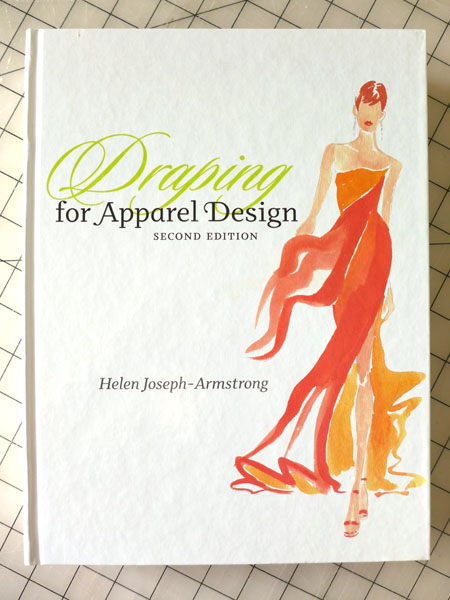 In these text books, you will learn all the skills for drafting or draping more designs than you could have ever come up with on your own, and do it all in a professional manner that is suited for the industry, should you decide to take it beyond your personal sewing needs. 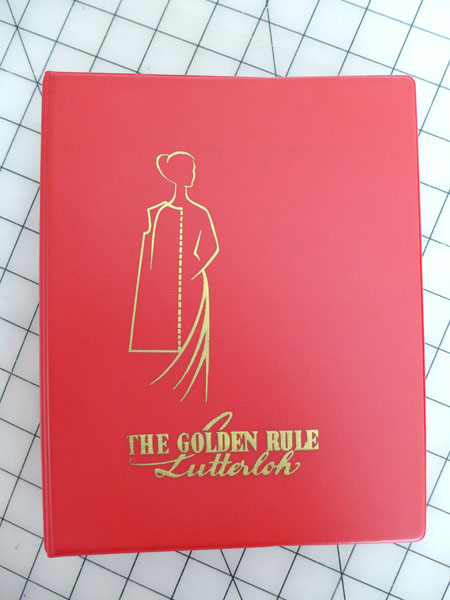 Tip #4: Try patternmaking on your own

Once you’ve learned a thing or two and have invested in some quality tools, then it’s time to give it a go for yourself! One of my favorite books is the Lutterloh system. This is a truly unique style of patternmaking where you first browse the styles that are hand drawn in the front of the book (pictured below), then you look up the pattern in the second part of the book that has all the pattern pieces and measurement markings written in. 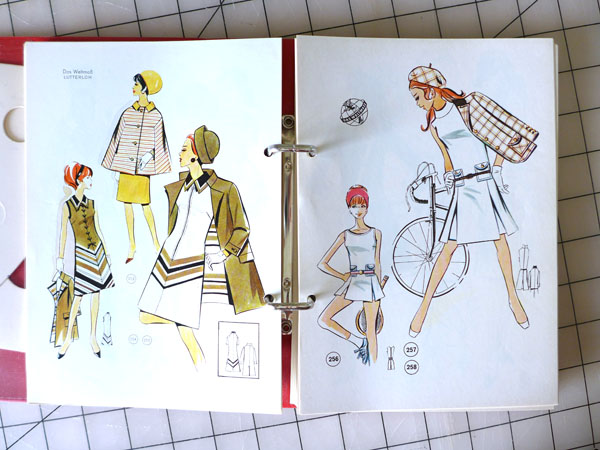 From there, you use their system to recreate the patterns, following their technique and tools. It’s a pretty amazing process and for someone just starting out, it’s a great way to become comfortable with the process of drafting patterns for garment construction. Once you’ve drafted the patterns, then you can sew them up and use all this knowledge in your own designs. These books were made throughout the years and can be found on eBay as well as around the web. Mine is from the 1960’s and has the most amazing vintage designs, as pictured above. 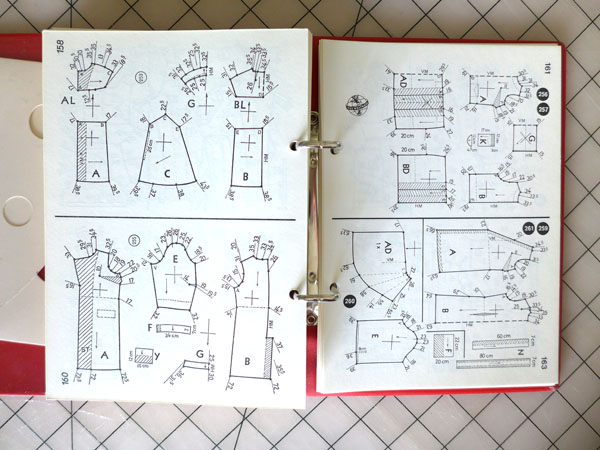 Tip #5: Enroll in a patternmaking class!

I would say that the absolute best way to learn quickly is to take a class in patternmaking with a qualified patternmaker. If you are in a place that has a local sewing shop, contact them and see if they have any patternmaking classes. If they don’t have specific classes, see if any of their customers or employees know enough about patternmaking to give you some lessons on the basics. Alternatively, many communities have custom tailors and seamstresses, that also might be willing to share their knowledge, even if they do not usually teach classes on the subject. Larger cities might have sewing shops with patternmaking classes, and many have college courses, adult continuing education courses, or a trade tech school where you can learn some skills. Do some searching and you might be surprised on how much is out there!

The main advice is to not be fearful and just get started! Buy one of the books, start to read it, and see how it goes. Find something that looks amazing to you and try to draft it! Unless you are selling your patterns, there’s little harm in trying, experimenting, and failing until you get it right. Give it a shot!