When one thinks of Impressionism, more often than not the first name that comes to mind is French painter Claude Monet. With his dappled brushstrokes and fascination with changing light, Monet’s work more than any other defines the term ‘impression.’

If you’ve ever wanted to know how to paint like Monet, you are certainly not alone. Here’s a look at some of his techniques.

Monet’s painting Impression, Sunrise from 1873 was the painting that caused art critic Louis Leroy to coin the term “Impressionism,” though his intent was more insult than compliment at the time. 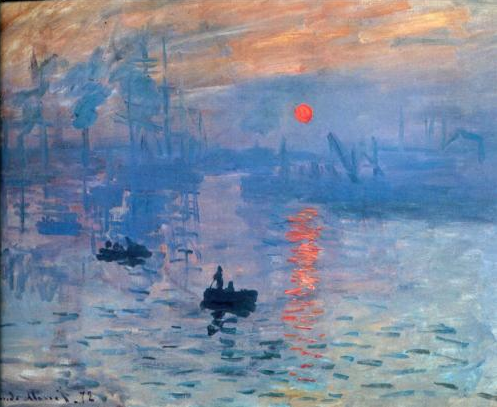 To maintain the same level of spontaneity and energy throughout, he has not worked any part of the painting past the level of a few short strokes, allowing the viewer’s eye to “optically blend” color and value information. In this detail of the water, you can see the raised edges of thick paint, and the intense, almost straight-from-the-tube color. 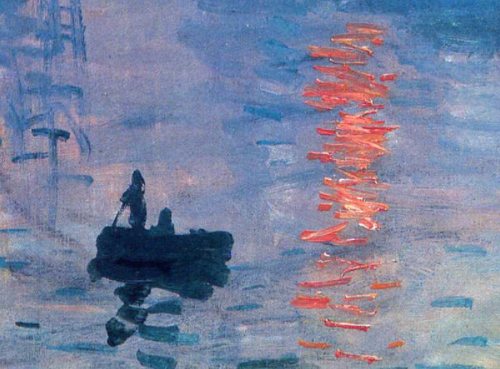 His short strokes and heavy impasto anticipate both the work of Vincent Van Gogh a few years later and the pointillist techniques of Georges Seurat. 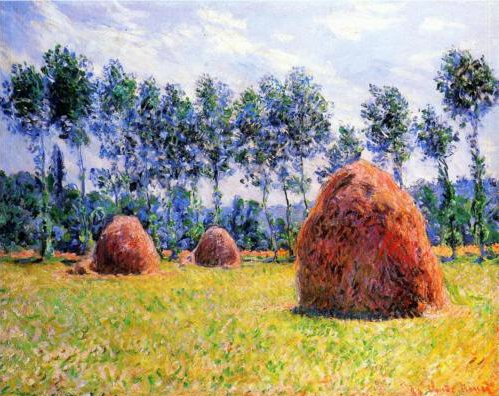 Artists have long known that distant objects close to the horizon appear more blue and get lighter the further away they are. The traditional approach has been to paint atmospheric perspective softly, using as well-blended and diffused a brushstroke as possible to make the imagery appear further away. Monet shakes up that tradition by vigorously attacking this area with his signature short, choppy strokes, once again coaxing the viewer to “optically blend” the strokes and values, and it still fades into the background.

The haystacks themselves are a great example of how value, color and context go a long way toward describing something. Monet doesn’t have to paint individual straws for the viewer to see the hay– another brilliant “impression.” 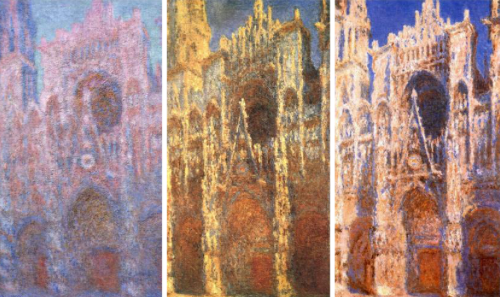 Monet was fascinated by the interplay between light and the natural and built landscape, and his series of studies of Rouen Cathedral from 1894 are one of the most detailed examinations of how light changes over time and through different weather that any painter has ever undertaken.

Especially interesting is how Monet’s technique changes to respond to the different light scenarios– in a soft light situation, Monet’s brushstrokes are similarly soft and diffused, while his impasto grows more aggressive and sculptural when the scene contains a harsher, stronger light. This series of paintings also emphasizes the speed at which Monet must have had to work to capture the light at the right moments. 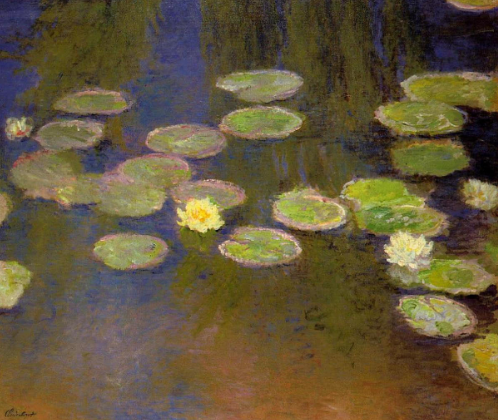 When you first come face to face one of the larger paintings from Monet’s Water Lilies series in person, it’s hard to understand how something so monumental in scale can seem so delicate and peaceful. If you look a little closer it’s also notable just how much Monet accomplished with an extremely limited palette of mostly muted and muddy greens and blues. Yet the lilies seem to glow with light, as do the reflections in the water.

Monet’s secret to making the pond seem three-dimensional is that only the lilies are impasto, with a tiny bit of indigo painted underneath each one serving as a shadow and reflection.

The pond itself, though made of Monet’s choppy brushstrokes, is flat and smooth. In the middle of everything is a radiant impasto yellow flower, poised against a complementary blue reflection.

Monet’s techniques have made him synonymous with Impressionism, but they aren’t exclusive to that movement. You can see his influence in many contemporary paintings, both representational and abstract.

Explore Impressionism further in Master Palettes: Explore Color Mixing. Or learn about great oil portrait painters. And be sure to come back to the Bluprint blog tomorrow for more fun with fine art! We’ll share five tips for painting watercolor portraits.

What Monet techniques would like to incorporate in your next painting?