There’s nothing like making pecan pie in the fall. Delightfully decadent and rich, it’s the ultimate comforting cold-weather food. Learning how to make pecan pie, therefore, is an investment in your time that will pay back with dividends, ensuring that you’ve got a crowd-pleaser of a dessert recipe all through the holidays. 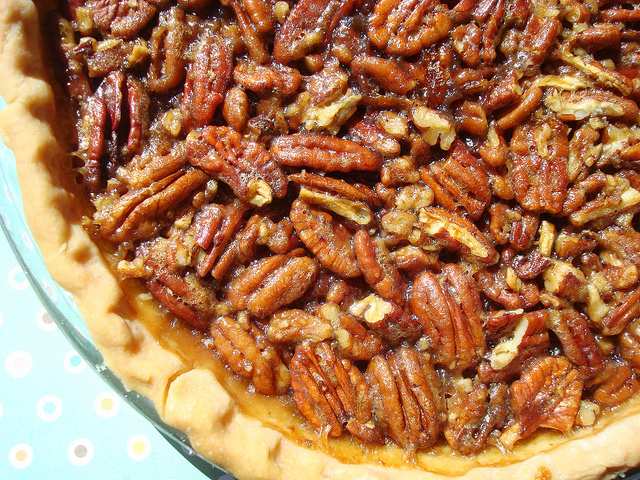 Scared to make a pie crust from scratch?

Don’t be. The process is a piece of pie once you’ve learned some basic techniques. The Craftsy course Perfecting the Pie Crust will help you conquer the crust, teaching you how to make, roll out and blind bake crusts. But instructor Evan Kleiman, a pie-oneer in the field, doesn’t stop there: she shares decorating techniques, including crimping, creating appliqués and building beautiful lattice and decorative crusts. 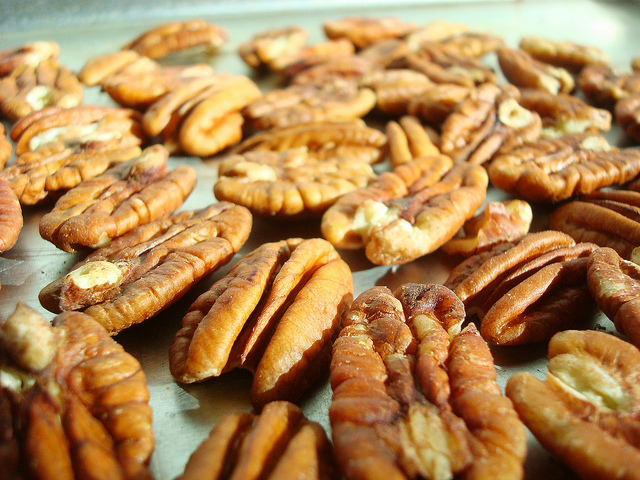 Once you’ve mastered the crust, it’s time to start thinking about the filling.

Pecans are the very heart of this sticky, make-your-teeth-hum-and-your-soul-buzz-with-sweetness, oh-so-tasty dessert.

Did you know that pecans are the only major tree nut that is native to North America? They were used first by Native Americans, then cultivated by Spanish settlers in Mexico. When French and Spanish colonists along the Gulf of Mexico began raising and exporting the pecan, it became a worldwide phenomenon. Its popularity spread as it became more widely available.

It was the aforementioned French settlers who brought the nut to New Orleans, which was to become Pecan Central — the climate was favorable for growing the nuts, and the locals developed a taste for them. For a time, revenues from the pecan harvest were more valuable than cotton! 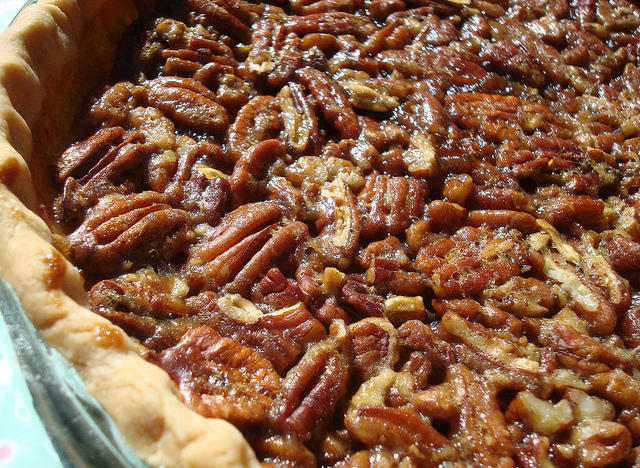 Perhaps it’s that French connection that led the way to pecans being used as a pie filling. Pralines, an almond and caramelized sugar confection, had been reimagined stateside with pecans and became very popular in the New Orleans area. Considering this, the jump from confection to pie wasn’t so drastic, and the pie proved popular in the region — an early recipe called “Texas Pecan Pie” appeared in Ladies’ Home Journal in 1897. The recipe, which called for a custard base as well as pecans soaked in milk, is clearly an ancestor, but it’s not quite the pie we think of today. 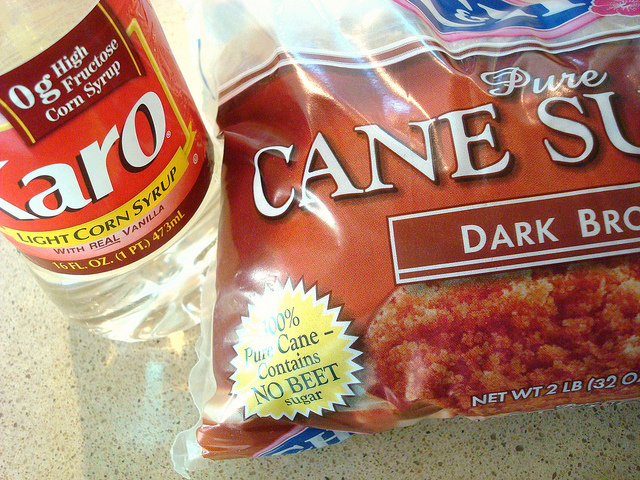 And then, along came Karo, the corn syrup company. According to company lore, a sales executive’s wife discovered a new use for corn syrup when she combined it with sugar, eggs, vanilla and pecans, and baked it in a pie shell. Sheer brilliance! (In the South, the recipe was and still is called Karo Pie.) And so a debt of gratitude must be paid to, yes, corn syrup. Pecan pie quickly became an American classic.

When making this pie, the only fussy part of the recipe is tempering the eggs; if you do it too quickly, you could end up with scrambled eggs in your sweet mixture. But don’t stress. Take a deep breath, beat like heck, and keep your eyes on the prize: a delicious pie at the end of that baking road.

Don’t ignore the part of the recipe that asks for the pecans to be toasted. The crispy exterior of the toasted nuts not only gives the pie a superior texture, but a tantalizing flavor.

Is the bourbon necessary in this recipe? No, but the rich flavor works beautifully with the brown sugar and pecans. If you prefer not to use alcohol, you can substitute water.

Not keen on corn syrup:

If you prefer not to use corn syrup, make this substitution: mix one cup of sugar and one cup of water, until the sugar dissolves. Use this instead of corn syrup (the pie may be a little wetter and less gooey).

Preheat the oven to 325 degrees F.

Roll the pie dough into a circle about 12 inches in diameter; place it into the pie pan and crimp the edges. Place in the preheated oven for 10 minutes to lightly blind bake. You don’t want to completely bake the crust, just make it slightly matte in appearance. This will help it stay sturdy and not turn gummy when the pecan filling is added. Remove from the oven, and set to the side for the moment. 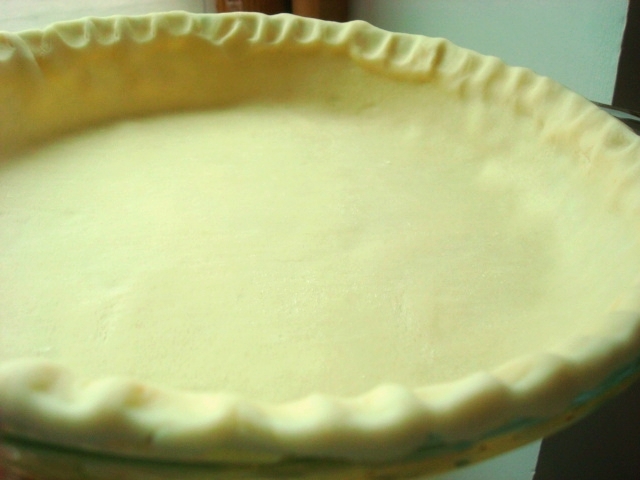 Place the pecans on a baking sheet in a single layer. Place the sheet in the oven. (It’s fine to put them in at the same time as the crust, on another rack). Toast for 8 to 10 minutes, or until the nuts are fragrant. Remove from the oven, and set to the side for the moment.

Note: Don’t turn off the oven. Keep the oven at 325 degrees. You’ll be using it again soon.

Put the corn syrup and brown sugar in a heavy saucepan over medium heat and cook, stirring occasionally, until the sugar dissolves. The mixture will bubble lightly. 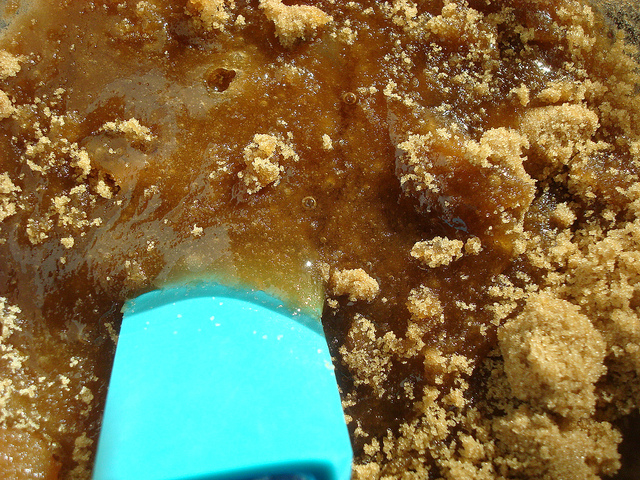 Remove from heat and add the butter, bourbon (or water) and vanilla. Let the mixture cool to just slightly warm, then add the eggs and whisk until smooth. (Don’t add the eggs while the mixture is still very hot, or you’ll have scrambled eggs!) 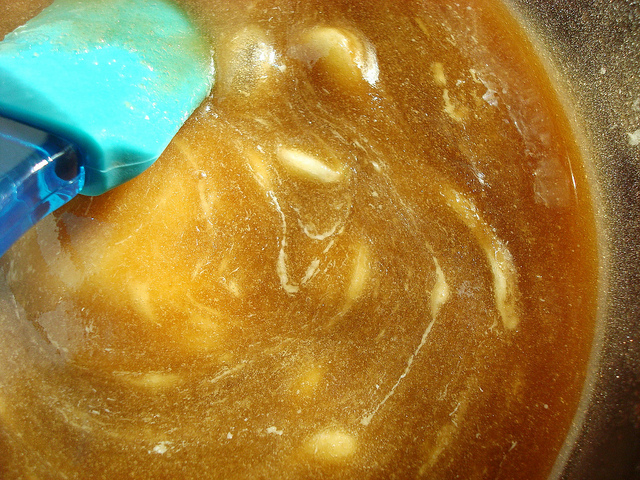 Arrange the pecans on the bottom of the crust. Carefully pour the filling over them (some will magically rise to the top). 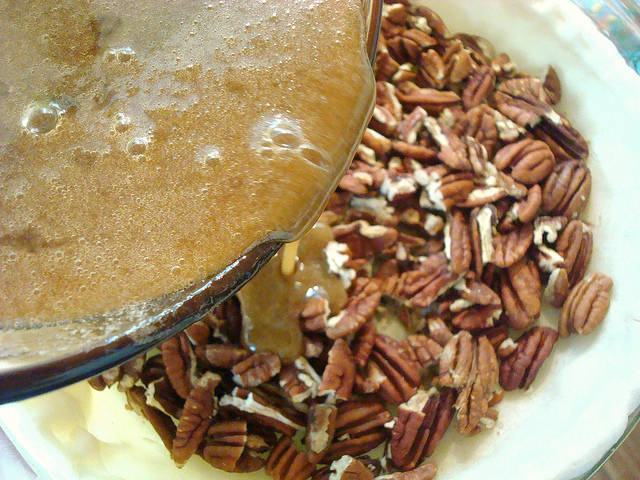 Bake for 45 to 50 minutes, until the filling is set; rotate the pan halfway through baking time.

What to do if the crust is browning more rapidly than the insides are setting up?

Cover the edges with foil, and the crust will not brown as rapidly. Let the pie cool completely before slicing. If you slice it before it’s set, it might get slightly gooey at the edges. But hey, if nobody’s watching, we won’t tell! 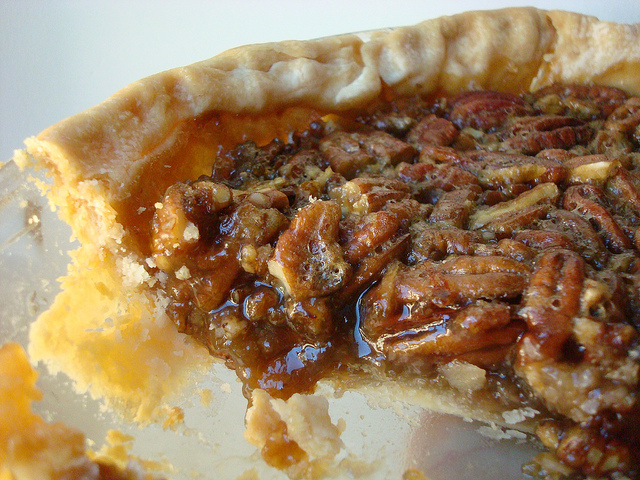 To store the pie, wrap it tightly and refrigerate for up to five days.

You might also enjoy our roundup of awesome autumn pie recipes and our tutorial on how to make pumpkin pie two ways.

Come back to the Craftsy blog on Tuesday to learn tips for tempering chocolate.