When it comes to drawing tools, there are two kinds: those that make a dry mark, such as pencils, charcoal, and pastels, and those that use a liquid ink: the pen family. Because of the unique flowing properties of ink, pens are almost a marriage of drawing and painting. In fact, the first pens weren’t too far from paint brushes.

Let’s take a look at kinds of pens and what they’re best used for. 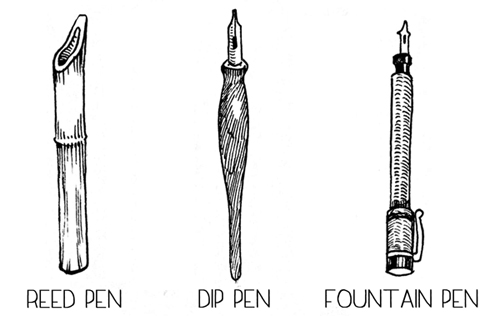 Reed pens are among the earliest pens and have been found at archaeological sites dating back as far as the fourth century B.C. They preceded the more familiar quill pen, which works the same way.

Reed pens usually consist of a reed or bamboo shaft cut at an angle. The angled point is dipped in ink and then dragged along the writing surface until the ink runs out and it needs to be dipped again. They can be made by hand quite easily, and the nib can be carved into many different shapes resulting in different line qualities.

While not very durable, reed pens remain in use today and are a favorite of calligraphers as well as fine artists. Vincent Van Gogh in particular used reed pens often for drawings as they complemented the loose, gestural brushstrokes in his paintings, such as this sketch for Starry Night, done in 1889. 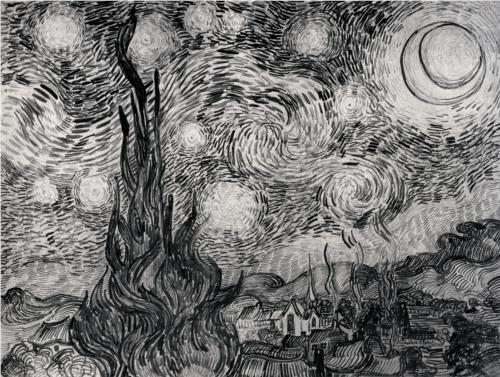 Dip or nib pens followed reed pens and quills, and date back to around the beginning of the 19th century. They consist of a steel nib attached to a handle that can be made of almost any material.

Mechanically they are very similar to a reed pen except that the steel nib is split down the middle, creating an ink channel. Once the nib is dipped in ink and makes contact with the writing surface, the ink flows down the channel via capillary action, leaving a very consistent and easily controllable line. By placing more or less pressure on the nib, one can control the width of the channel and thus the width of the line. Dip pens had numerous advantages over reed pens, most notably the durable steel nib and the fine line control.

The celebrated political cartoonist Thomas Nast (who first assigned the elephant symbol to the Republican Party, among other things) typically used a dip pen to create his illustrations. The graphic line was the perfect way to convey Nast’s often scathing political messages. Nast’s images were far more effective than print in bringing to light scandal and corruption, as seen in this cartoon depicting New York political figure “Boss” Tweed, who famously blamed Nast for bringing an end to his political career. 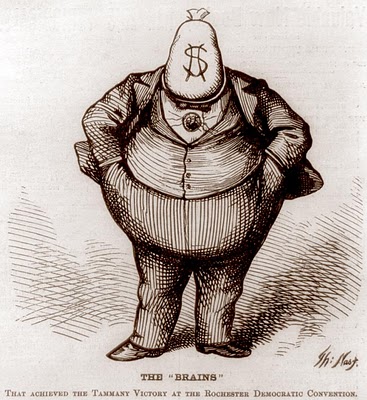 Fountain pens brought an end to the repeated, tedious dipping of pens. They contain an internal reservoir of ink — often a refillable cartridge — that allows an artist to make a continuous line without stopping to “reload” the ink on one’s nib. While pens containing reservoirs of ink have existed longer than the dip pen, fountain pens combining the steel nib and a sealed, less messy reservoir of ink first appeared in the mid-19th century.

The chief advantage of a fountain pen is portability. Artists no longer needed to carry a bottle of ink alongside their pens to do a sketch outdoors. They also reduced the chance of errant splashes of ink from a hastily-dipped pen landing on one’s drawing, though any owner of a fountain pen knows that accidents will still happen.

The clean repeated lines in Edward Hopper’s Study of a Standing Woman from 1900 indicate he was almost certainly using a fountain pen, allowing him to develop a much quicker rhythm with his hatch marks than the Nast drawing above without stopping to dip his pen repeatedly. 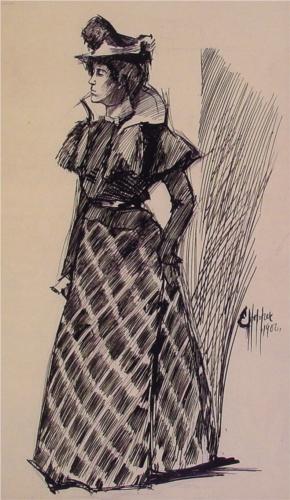 There are many new and different types of pens available now in addition to the three standards mentioned above. Technical pens are essentially fountain pens with slightly different nib shapes. Ballpoint and roller ball pens use the movement of a ball bearing to transfer ink onto the page, but are otherwise very similar. Yet even today, dip pens especially are still the most popular among illustrators and graphic artists.

You may also enjoy our post on the essentials of drawing media. And be sure to check out Bluprint’s selection of online drawing classes, taught by talented art instructors.

Tomorrow on the Bluprint Blog, we’ll discuss the basics of three-point perspective.

What is your favorite type of pen to draw with?