Sometimes even if you follow the pattern, your finished project still has some imperfections.

Take, for example, this sweater sleeve. If I had picked up the stitches around it like the instructions told me to, I would probably have had a huge gap between the underarm and where the sleeve meets the yoke. 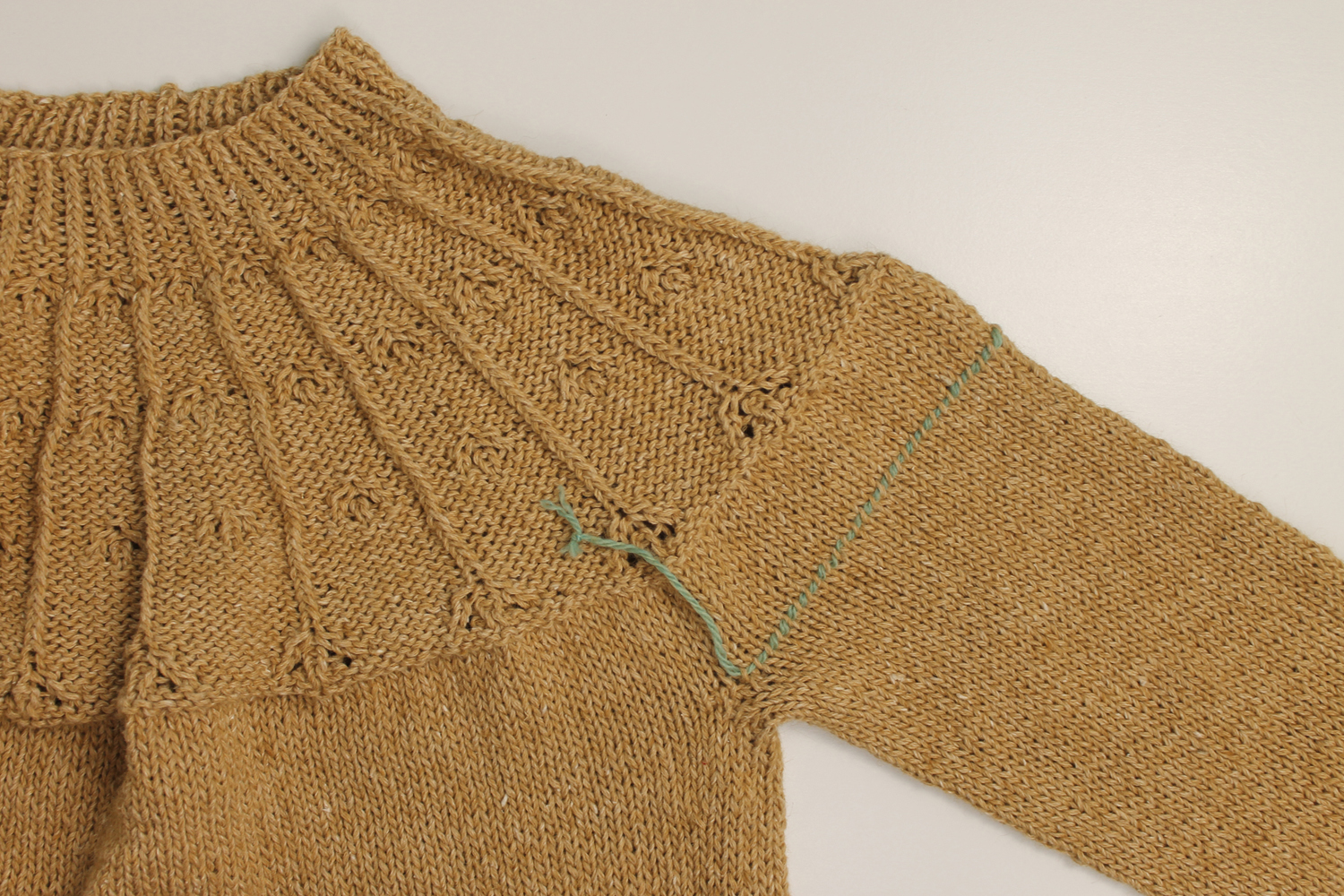 This problem can happen with any pattern where you’re turning a corner as you pick up stitches, from sweater sleeves to sock heels. But there’s an easy way that you can fill that gap without messing with the stitch count.

When to pick up corner stitches

This technique can work on any project that requires you to pick up stitches across a line that’s not straight.

This technique can work on plenty of projects. For this demo, I’ll show you the technique on a sweater sleeve. But you can use the same approach on sock heels to avoid a gap in the corner between the foot stitches and heel stitches.

How to pick up corner stitches

To show you this technique, I’ll use this Agrotera Pullover by Amanda Bell as an example. The sweater is constructed from the top down. After knitting the yoke, I placed the stitches for the sleeves on stitch holders, following the pattern instructions. Then I knit the rest of the sweater body, and came back to the stitches around the sleeves. 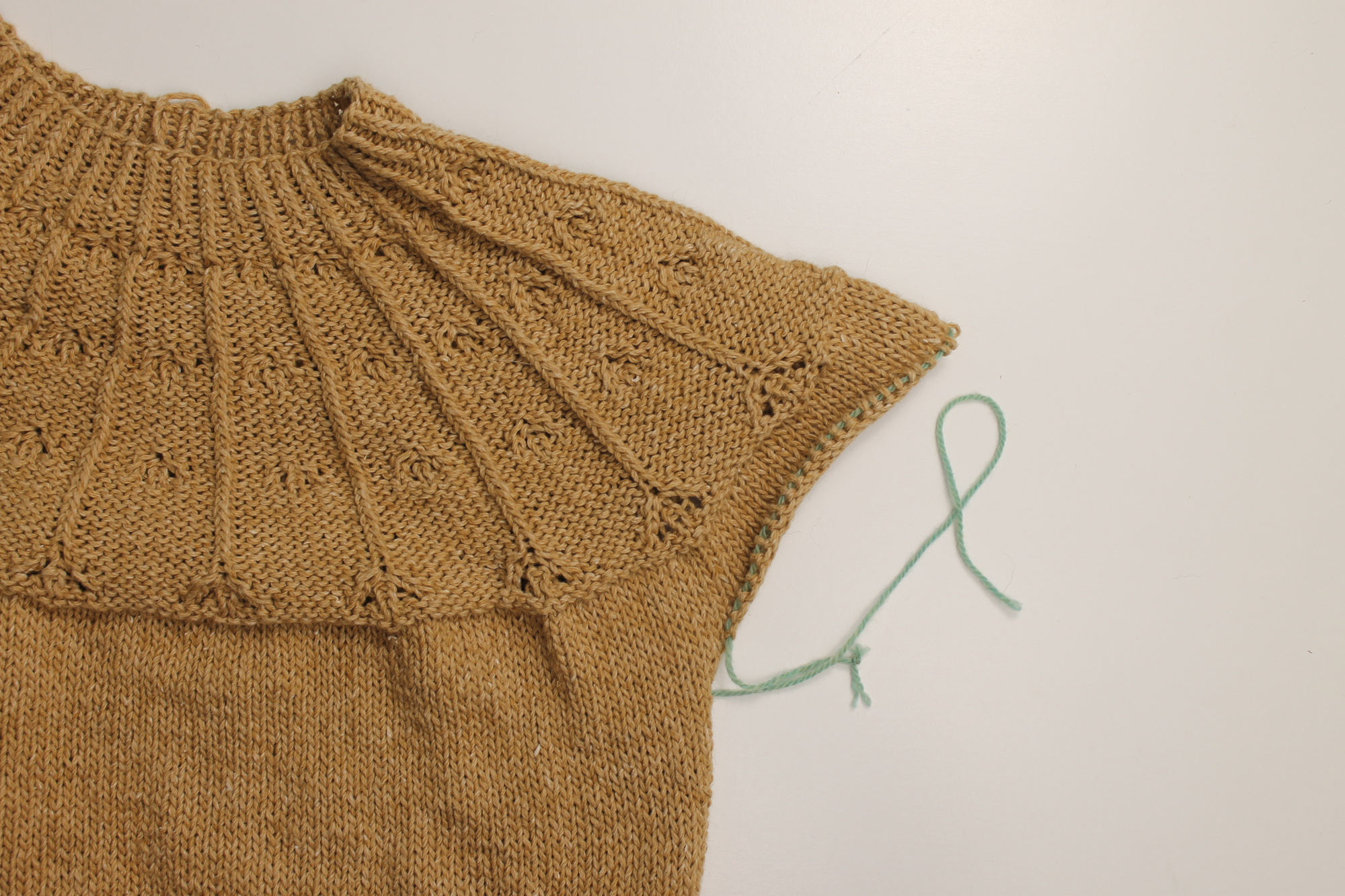 To make sure the sleeve goes all the way around the armhole, stitches are picked up across the underarm and combined with the stitches on the holder. This requires turning a corner, leaving a little gap. To avoid that gap, all we need to do is pick up some extra stitches then decrease them out.

Let’s take a look at how this technique worked on the sweater sleeve, then you can apply the technique to any project you’d like. 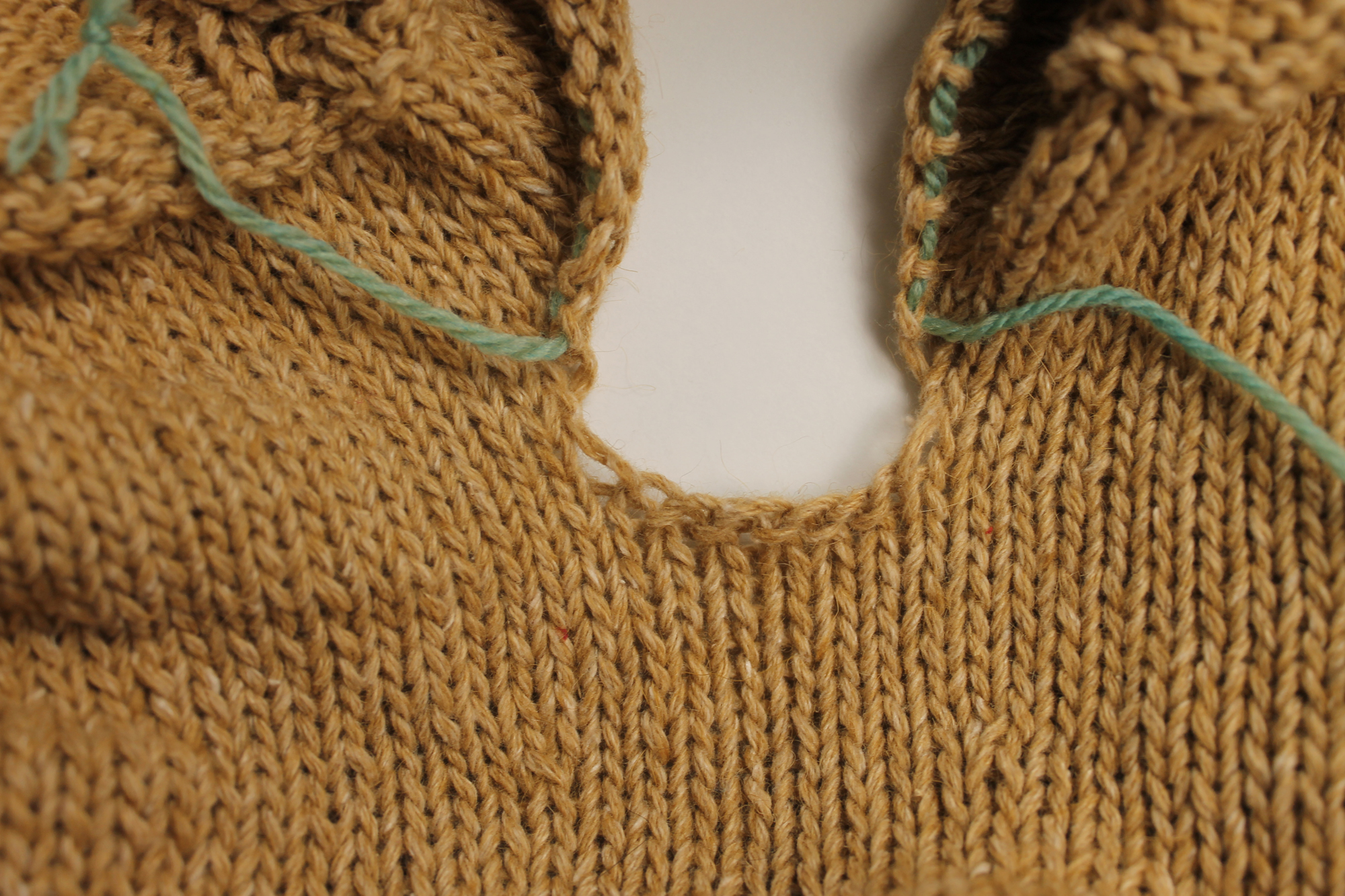 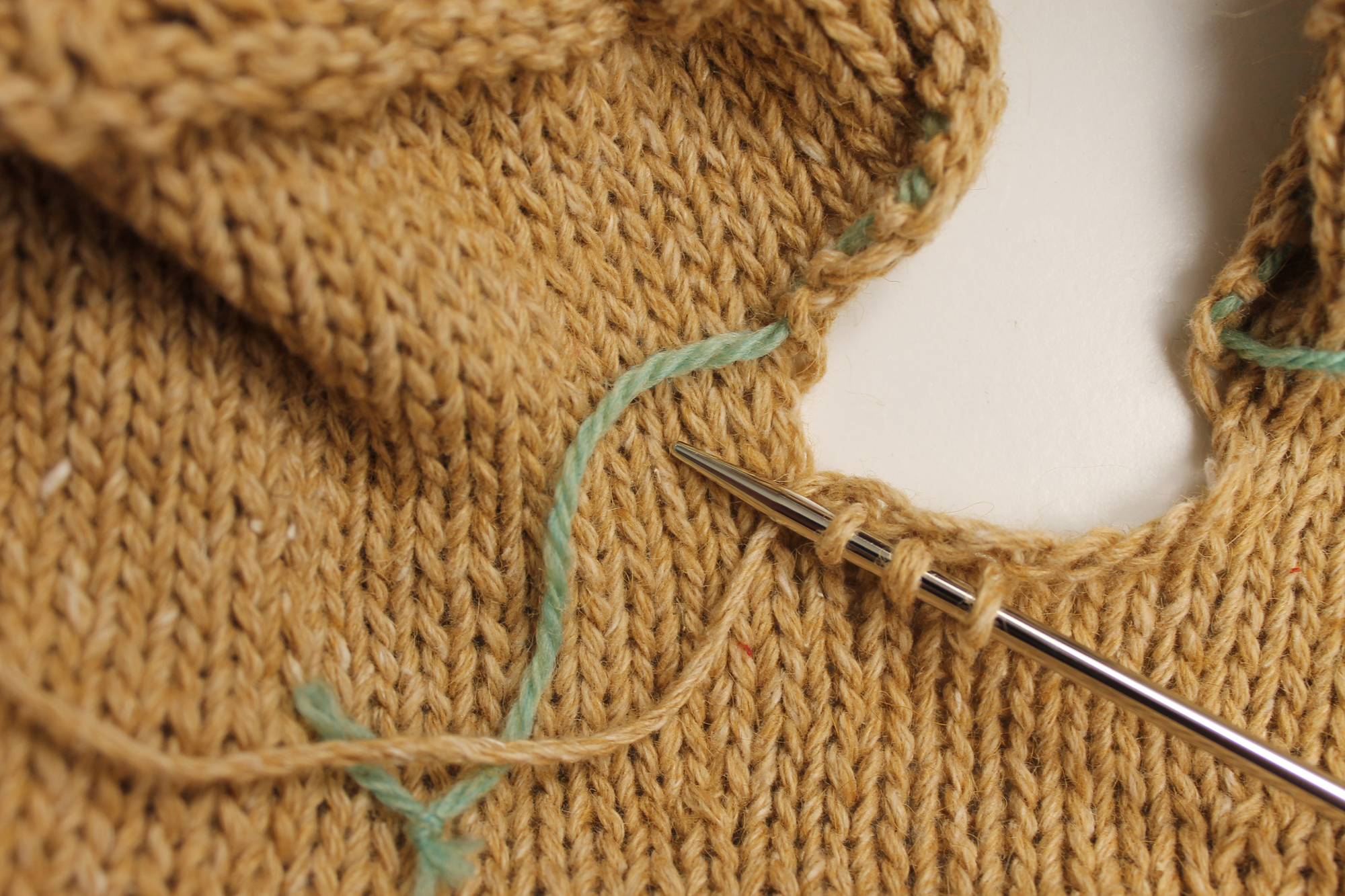 First, I picked up the 3 underarm stitches starting at the center. You can see that there’s a lot of space between the last picked-up stitch and the first stitch on the left holder yarn, which will create a gap. To avoid the gap, I’ll add some stitches (even though the pattern doesn’t call for it). 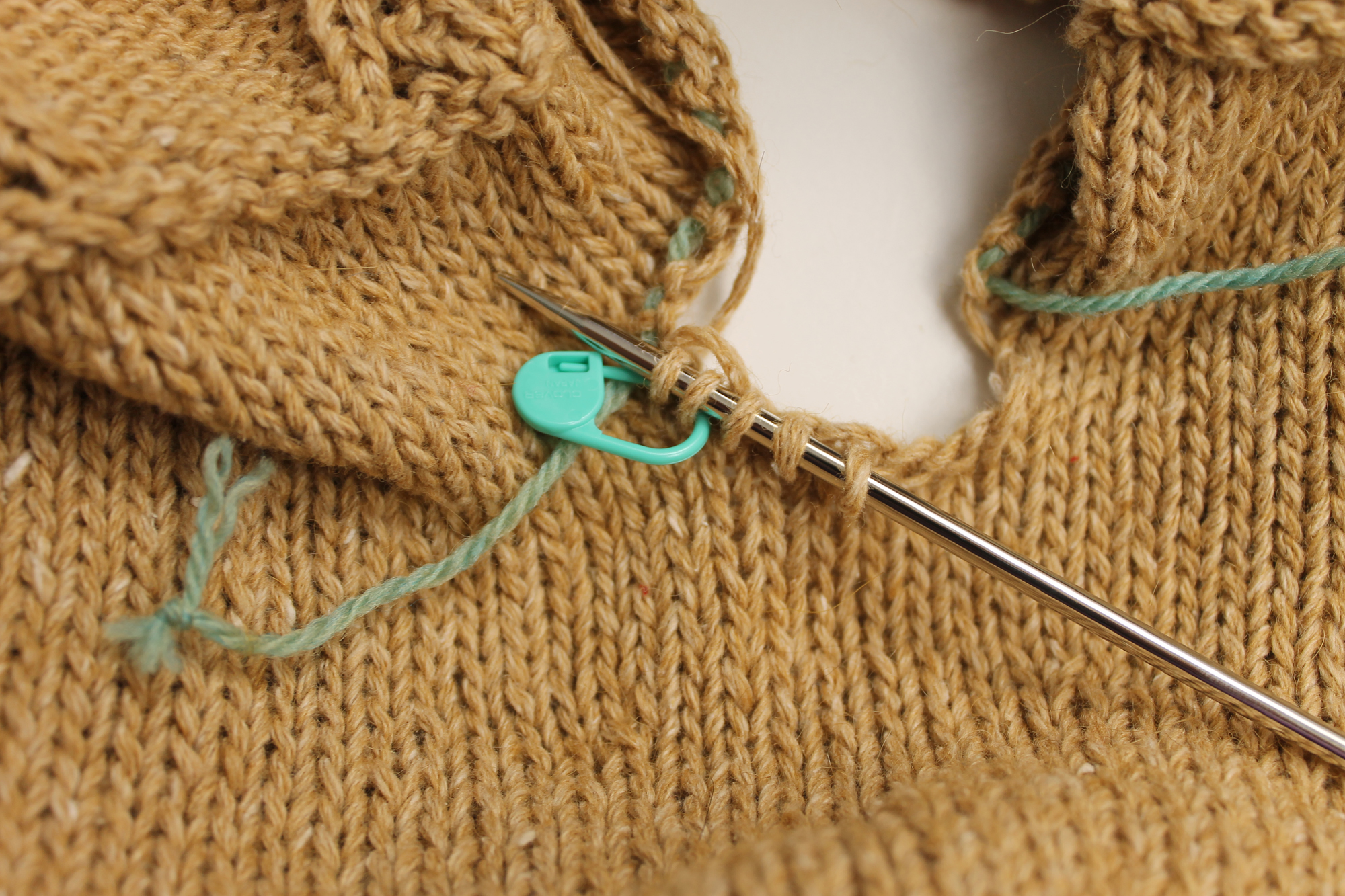 I picked up two extra stitches between the underarm stitches and the first stitch on the stitch holder. I also placed a stitch marker around the extra stitches so I’d remember when I made my way around again. 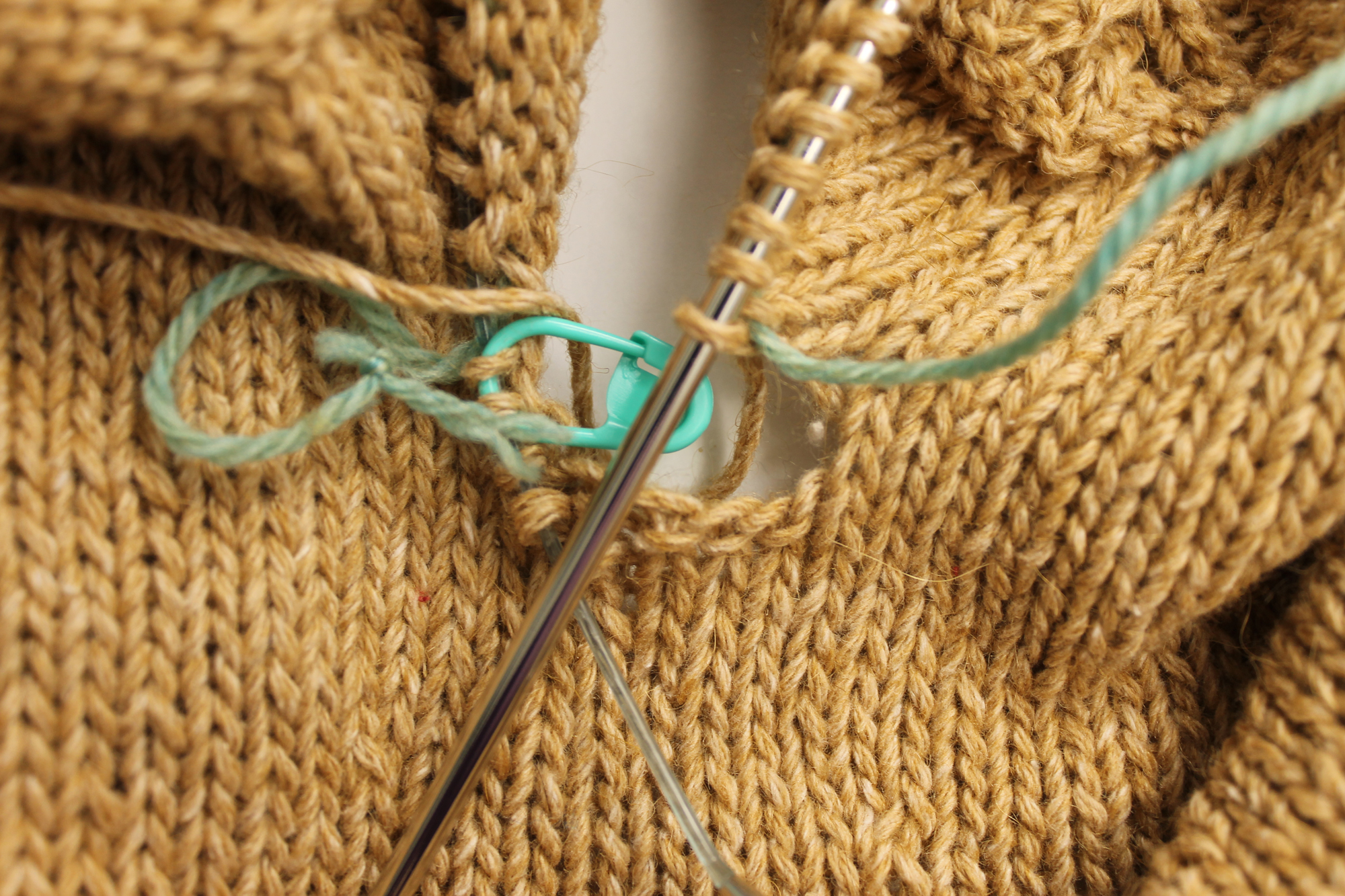 I continued knitting around to the other side of the sleeve. There’s a similar gap on this side, between the last stitch on the holder and the first picked-up stitch in the underarm section. So again, I’ll pick add some extra stitches. 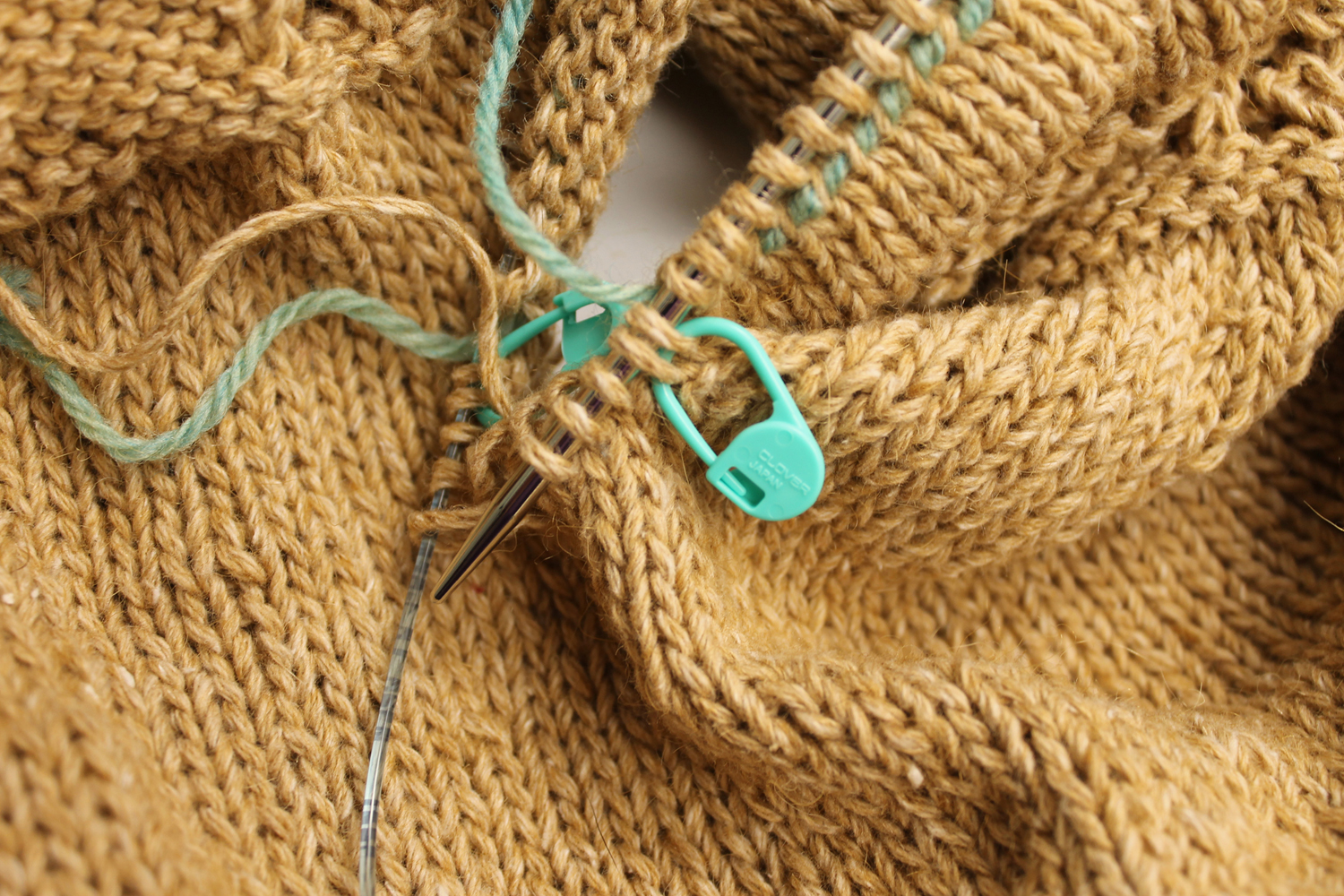 I picked up 2 extra stitches again, and placed another stitch marker around them. 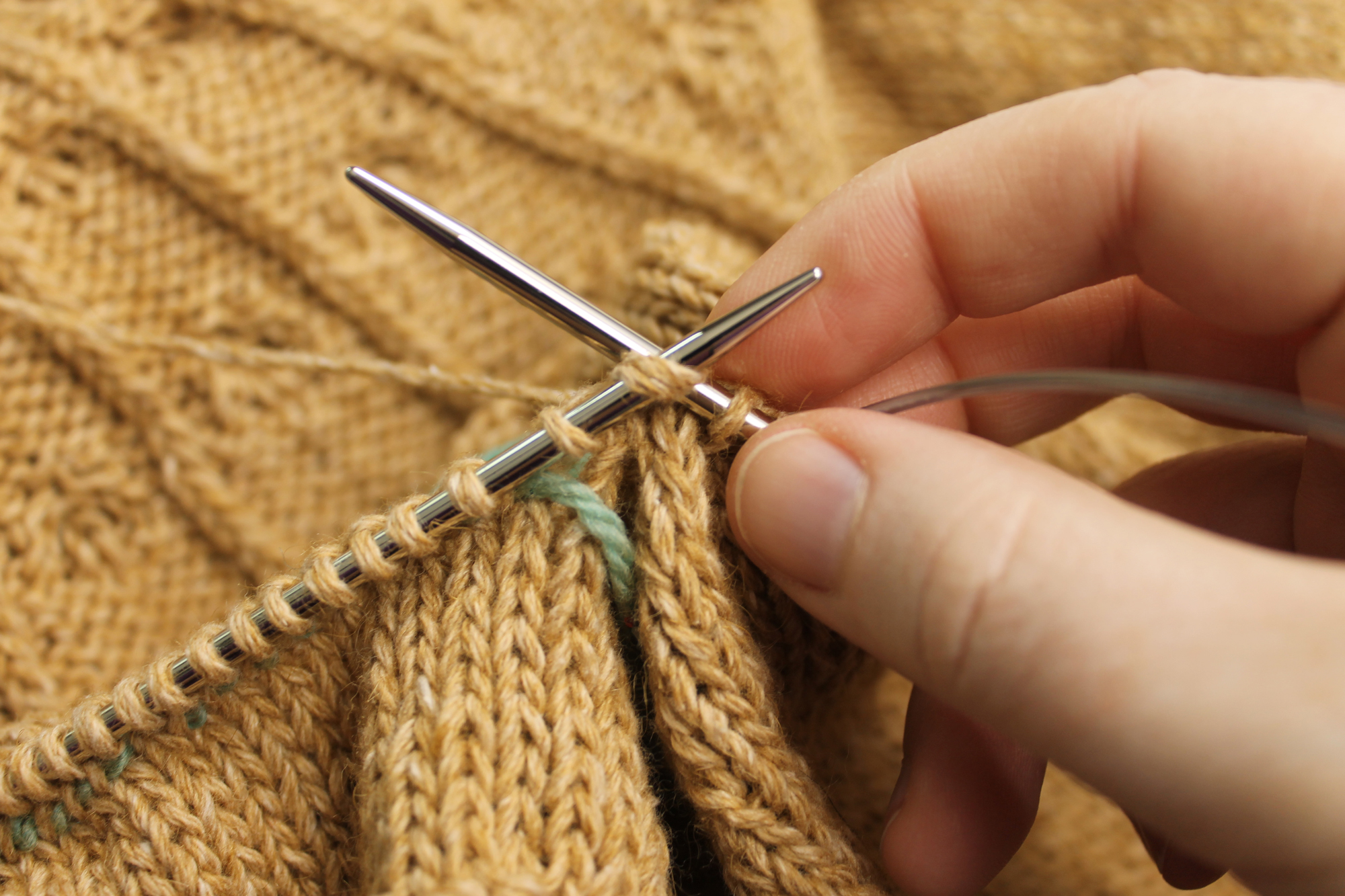 Then, I knit around to one stitch before the first marked stitch. I’ll need to decrease those extra picked-up stitches out so that they don’t affect my stitch count. 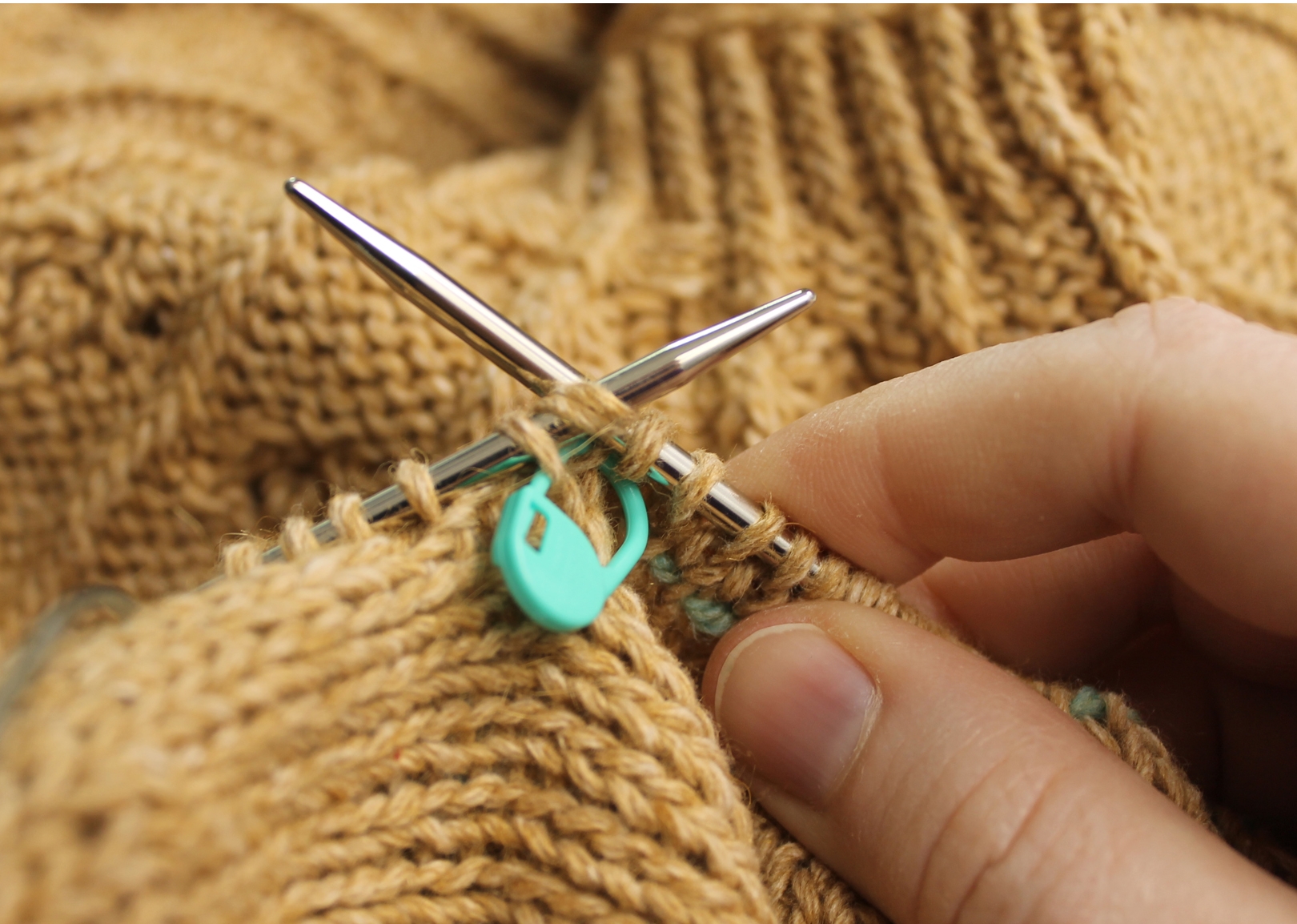 At this point, my stitch count matched the one in the pattern because I decreased out all the extra stitches. 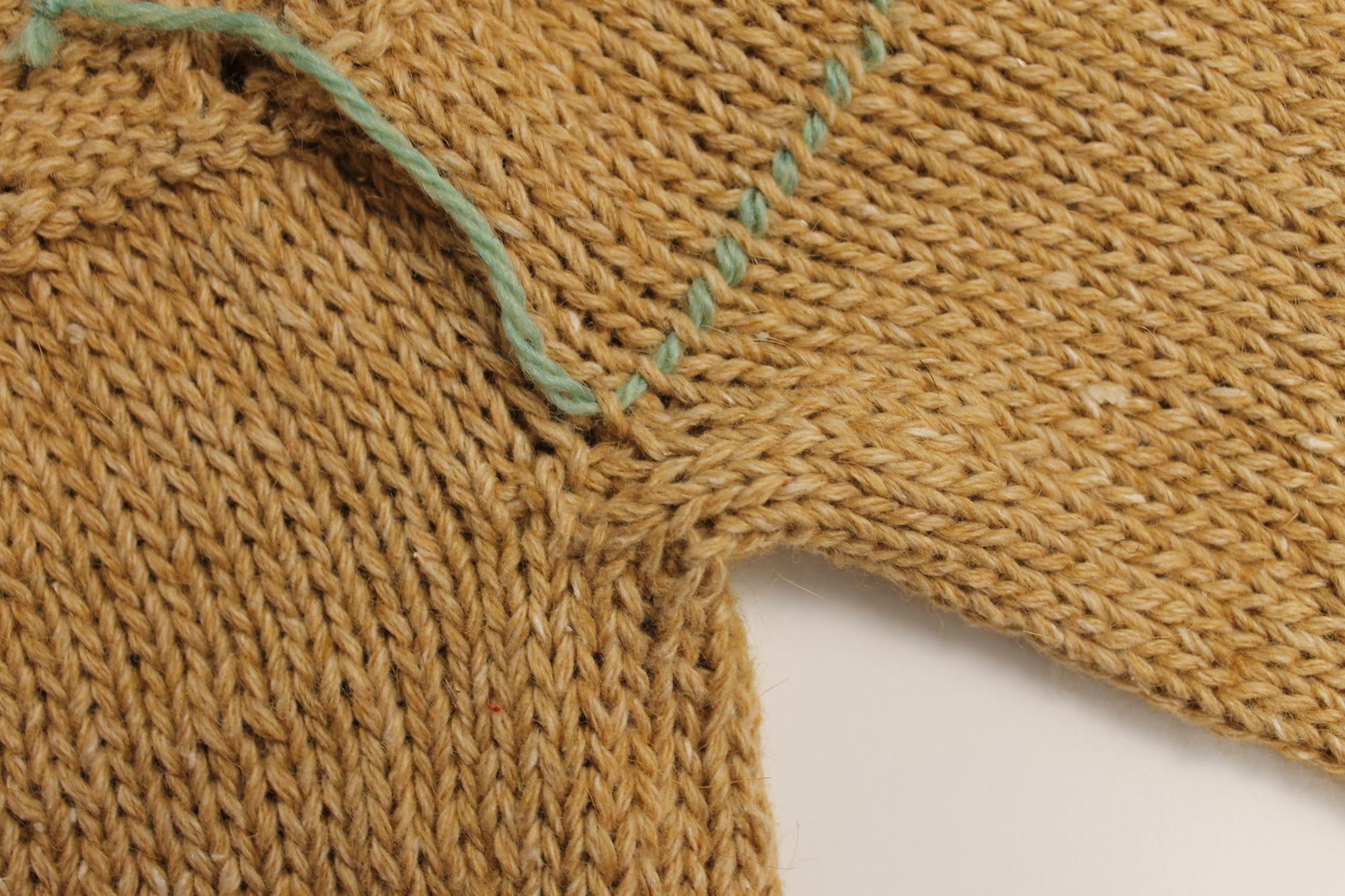 Check out the photo of the finished sleeve above. If you look close, you’ll see where I filled in those two extra stitches between the underarm and the start of the stitch holder stitches.

As you’re trying this technique, just remember: You can pick up as many extra stitches as you need to close up that gap, as long as you decrease out all the extra stitches in the next round.