By knowledgeably combining several factors when setting up a jack plane, a single plane can be made to perform a wide variety of woodworking tasks. You can efficiently dimension stock, accurately joint edges and even finish smooth curly maple with one plane if you know how. 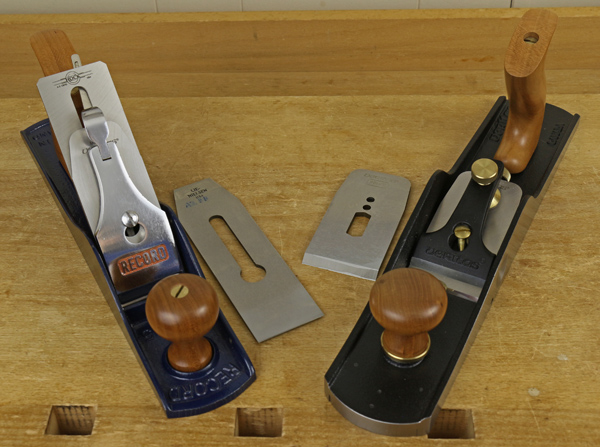 Let’s look at the factors, keeping in mind that each can be adjusted individually, but they all work together to make the plane perform as you want.

This is the angle created by the sole of the plane and the leading edge of the blade. In general, a higher attack angle reduces tearout in difficult woods but requires more force to push the plane through the cut. Attack angles range from 45 degrees, which works well for general planing including rough dimensioning of stock, to 60 degrees, which would be used to smooth figured woods.

In a bevel-down plane, the attack angle equals the frog angle when a conventionally sharpened blade is used. A 45-degree frog is a good all around choice and usually the only one available. Two manufacturers, Lie-Nielsen and Lee Valley/Veritas offer alternative higher frogs, though it is a bit cumbersome and costly to swap multiple frogs for a single plane.

There is a more convenient and less expensive way to raise the attack angle in a bevel-down plane. Instead of preparing the blade with the usual flat back, hone a very narrow bevel (1/64″ is enough) on the back of the blade. For example, a blade with a 10-degree back bevel placed on a 45-degree frog will produce a 55-degree attack angle. Thus, by having multiple blades, differently sharpened, a single bevel-down plane can be made more versatile. 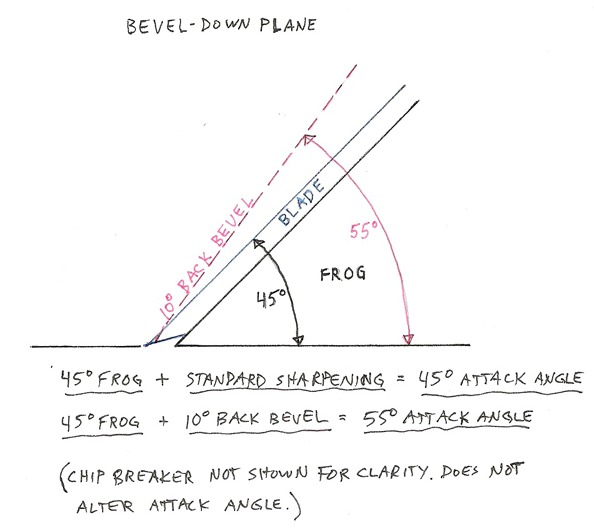 Below, note the narrow back bevel on the “flat” side of the blade. 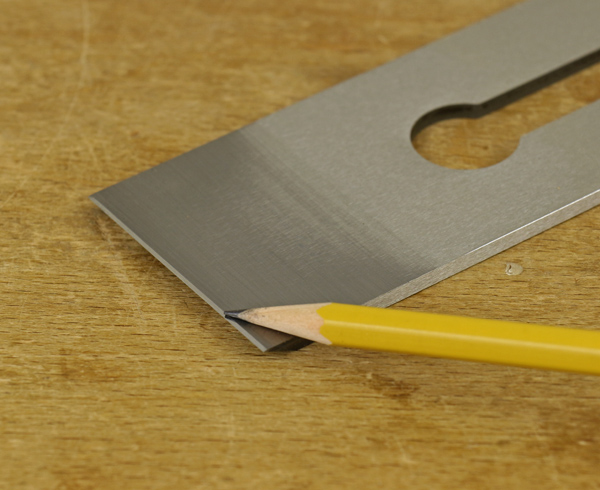 For a bevel-up plane, the attack angle equals the frog angle, 12 degrees, plus the sharpening angle of the leading edge, usually a secondary bevel. Thus, multiple blades, differently sharpened, easily expand the capabilities of a single bevel-up plane.

The lack of a chipbreaker makes blade changeovers quick and easy. For example, for finish smoothing a moderately figured wood, sharpen the blade with a secondary bevel of 43 degrees, which will produce an attack angle of 55 degrees when bedded on a 12-degree frog. 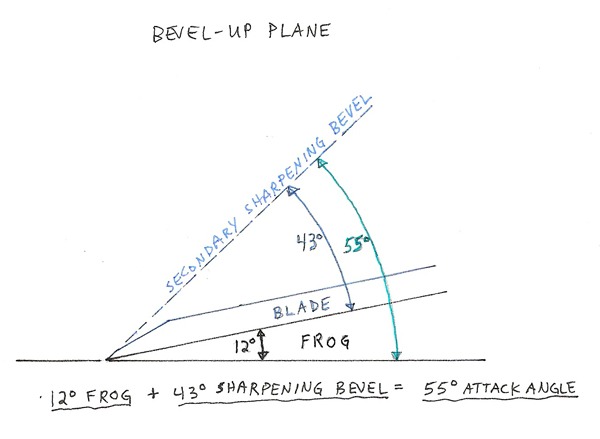 While having multiple blades for a single plane, consider the options of A-2 or O-1 steel for each. Generally speaking, A-2 is the tough one. It is somewhat more difficult to sharpen and perhaps does not take quite as keen an edge but it holds its edge longer. Thus, when setting up the plane for a 45-degree attack angle to be used for dimensioning stock, A-2 is a good choice. On the other hand, O-1 steel can easily be sharpened to a very keen edge. Though it dulls faster than A-2, it would be a good choice for finishing work.

This is the distance between the cutting edge of the blade and the sole of plane just in front of it. In general, a larger mouth facilitates rough work where thicker shavings must pass through and tearout reduction is less important. For smoothing work, which involves very thin shavings, a narrow mouth is used, as little as several thousandths of an inch. A very narrow mouth holds the wood fibers down very close to the cutting edge and thus helps prevent them from being lifted and torn ahead of being severed cleanly by the cutting edge.

Mouth adjustment in a bevel-down plane is made by moving the frog forward or backward. This is fairly easy in the excellent quality plane Lie-Nielsen planes but awkward and less reliable in most other brands. The Lie-Nielsen system, using the adjustment screws shown below, allow the frog to moved without removing the chipbreaker-blade assembly, thus allowing direct observation of the change in the mouth opening. 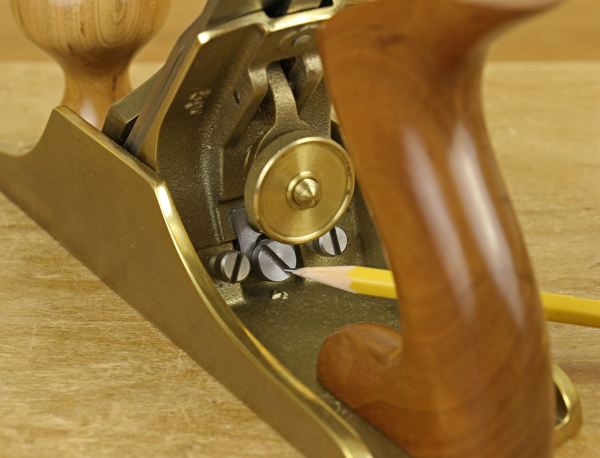 For a bevel-up plane, mouth adjustment is simple and quick. A knob loosens the movable section in the front of the sole, which is then adjusted to create the desired mouth opening. A tight mouth setting in a bevel-up plane is shown below. 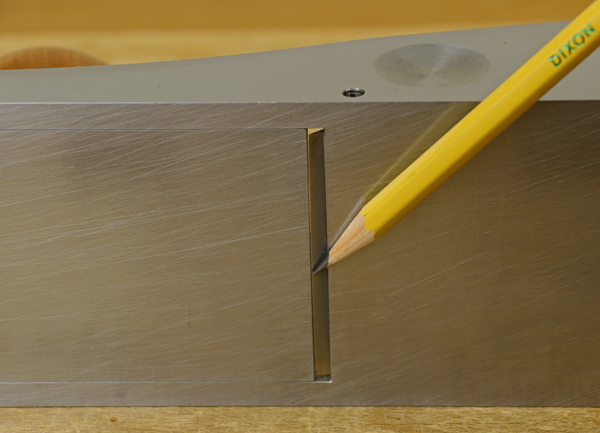 For smoothing highly figured woods with a very high attack angle, a very tight mouth can cause shavings to jam, so some trial and error is required to get this right. However, the compression function of a narrow mouth opening is actually less critical when very high attack angles are used because the chip is deviated sooner just by the effect of the attack angle. 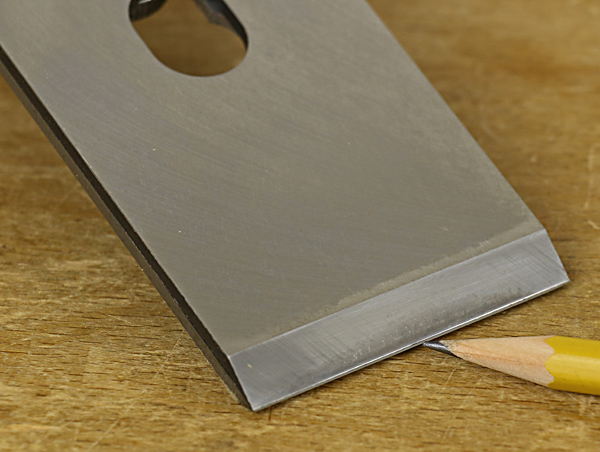 Note that the chipbreaker cannot be brought as close to the edge of a back beveled blade as to a blade with a flat back but the function of the chipbreaker is increasingly less important as the attack angle is raised.

It often surprises novice woodworkers that the blades of all types of bench planes are not sharpened straight across but rather with a slight curve across the edge, usually referred to as camber. A blade with a straight edge would plow square-edged gutters in the wood.

A smoothing plane, or your jack plane that you want to function as a smoother, should have minimal camber. The shaving made in finish smoothing is exquisitely thin, so the camber should be just enough to allow its thickness to feather out to nothing at its outer edges, as shown below. This will make utterly imperceptible curved-bottom cuts in the wood that feather into each other as the plane is used across the width of the board. 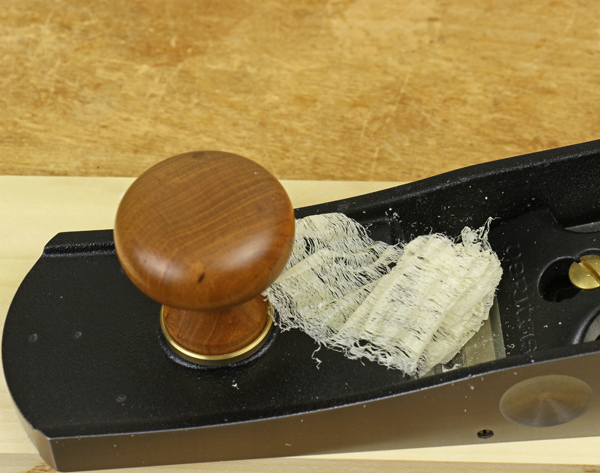 On the other hand, for rough dimensioning of stock, the blade should be prepared with more camber because thicker shavings will be made. Here, speed and efficiency are paramount and a slightly bumpy surface on the wood is entirely acceptable.

To use the jack plane as a jointer for final truing of edges and surfaces, prepare the blade with very little camber, similar to smoothing, but once again, never straight across. These small amounts are best judged by eye at the sharpening bench and informed by practice.

Working with different setups of the plane and its blades, along with practice and observation, will expand the performance of a single jack plane and greatly increase your woodworking skills. If you later acquire dedicated smoother and jointer planes, these skills will also allow you to expertly tune them for maximum performance.