With Saint Patrick’s day coming up, it’s the perfect time to learn how to make Irish soda bread. This traditional Irish loaf is moist, extremely dense, and massively satisfying, whether it’s served alongside a warming meat and potato-based stew, slow cooked corned beef, or simply with a thick smear of rich salted homemade butter. 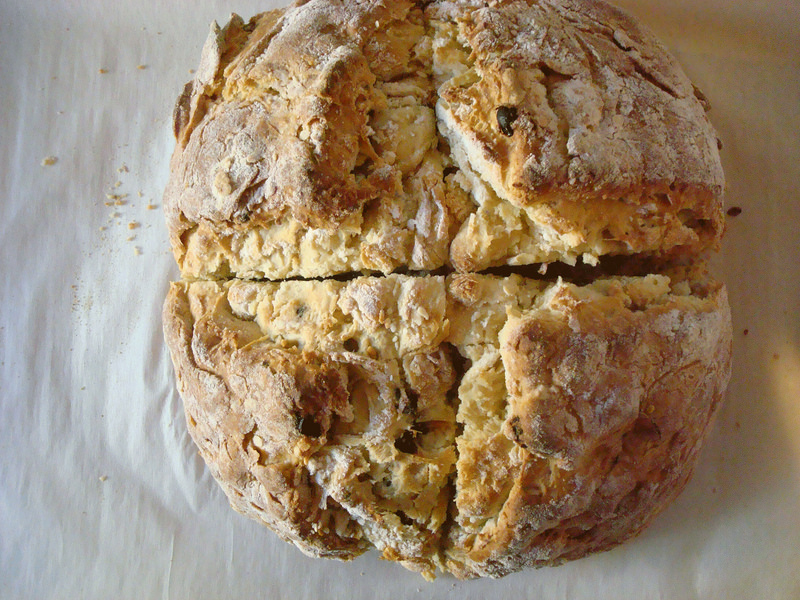 Making Irish soda bread–or just “soda bread” if you’re so inclined–will employ many of the skills learned in the Craftsy class Artisan Bread Making, but will come together quicker than many yeast bread recipes. Basically, it’s a quick bread made with soft flour (most recipes will employ all purpose or pastry flour as opposed to harder bread flour) and leavened with baking soda, which is where the bread gets its name.

While many an older Irish soda bread recipe is unsweetened, this recipe is evidence that a spoonful (or two) of sugar really does help the medicine go down in the most delightful way. The small amount of sugar called for in this recipe not only keeps the bread from tasting somewhat austere, but it also improves the texture and keeps the bread moist a bit longer. 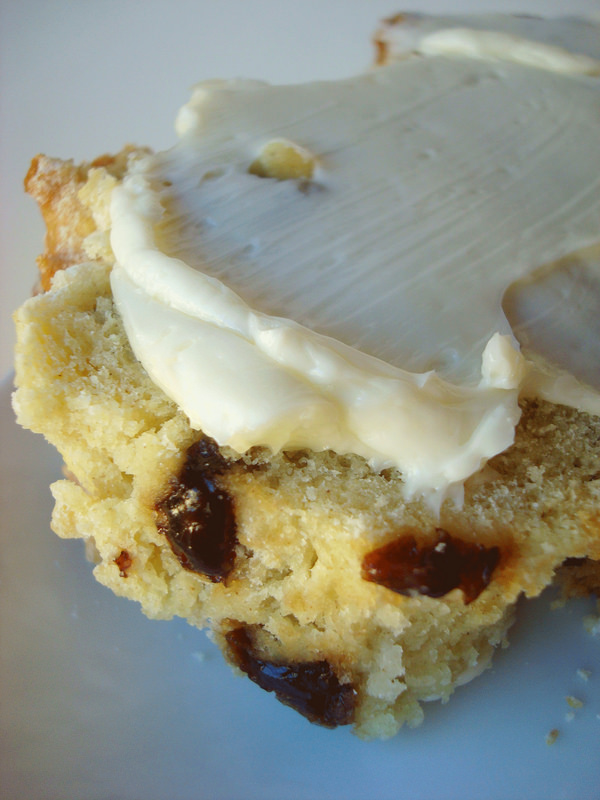 This quick bread is truly best the same day made, but it will keep, well wrapped at cool room temperature, for up to three days, or it can be frozen for up to a month.

Are your currants or raisins very firm, or even hard? Soften them up by soaking them in a mixture of water (enough to cover them in a bowl) and 2 tablespoons rum, brandy, or vanilla extract. The addition of alcohol or the extract will help improve flavor while the entire mixture will plump the raisins. Be sure to thoroughly drain and dry the raisins before adding them to the dough.

If your bread’s crust is browning too rapidly while baking, tent a sheet of aluminum foil over the loaf. This will slow down the baking of the exterior, so that the interior can catch up. 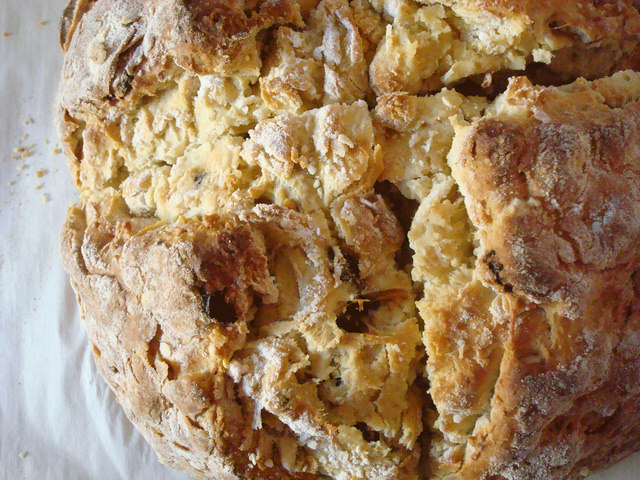 Makes one approximately 9-inch round loaf

Preheat the oven to 425 degrees F. Line a baking sheet with parchment paper; set to the side.

In a large bowl, sift together 4 cups of the flour, the sugar, salt, and baking soda. Using impeccably clean hands, a pastry cutter, or two forks, work the butter into the flour, mixing only until it resembles a coarse meal which can be loosely clumped by hand.

Stir in the raisins. With the dough mixture still in the bowl, form a well in the center. Pour the beaten egg and buttermilk into the well, and stir using a wooden spoon until the batter is combined, but don’t over-mix; just until everything is evenly moist. 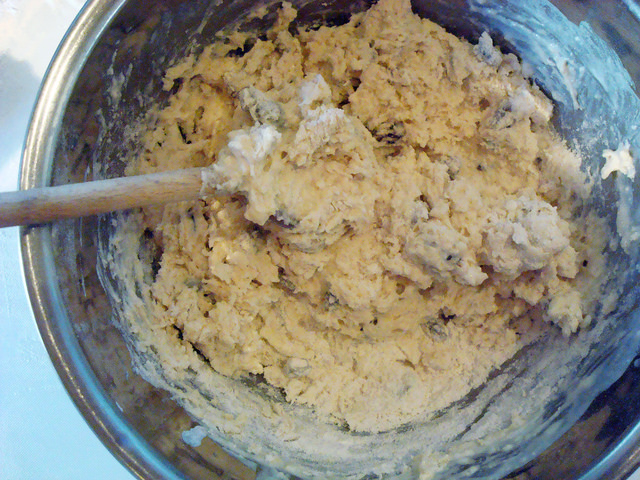 Dust a work surface and your hands with flour. Gently turn the dough on to the work surface, and knead the dough just enough so that you can form it into a ball. If needed, you can work in the remaining 1/2 cup flour, in part or in whole, but only work in as much as you need to make the dough workable; it may still be slightly sticky. Once formed into a ball, you’re not looking for smooth and seamless; it will be slightly rough. That is OK. 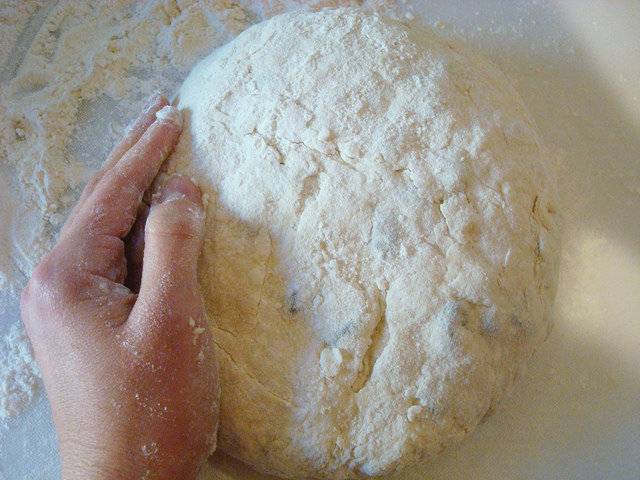 Transfer the round of dough on to your prepared baking sheet. Re-work the dough into a round with a domed top, if the dough alters shape while being transferred.

Using a serrated knife, score the dough with an “x” shape across the top, about 1 inch deep.

Bake until the bread is golden on the outside and has formed a firm crust, about 35 to 45 minutes. To ensure doneness, test by inserting a skewer or cake tester in the center of the loaf. If it comes out mostly clean, your bread is done. Remove from the oven, and let cool for several minutes before serving warm. 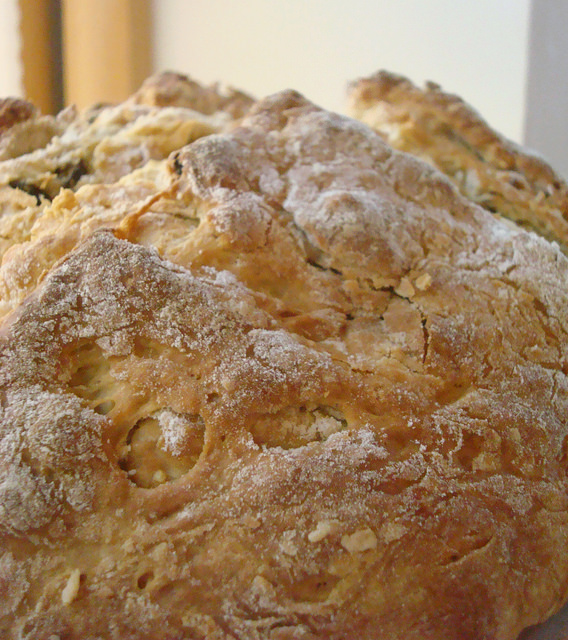 How do you like to eat Irish soda bread? Do you put anything on it or include in a special meal?