A router plane may not be an absolute necessity in the woodworker’s tool chest, but it sure is handy to have one when the need arises. Join us for a look at how to use a router plane, plus some scenarios where you’d be glad to have one on hand. 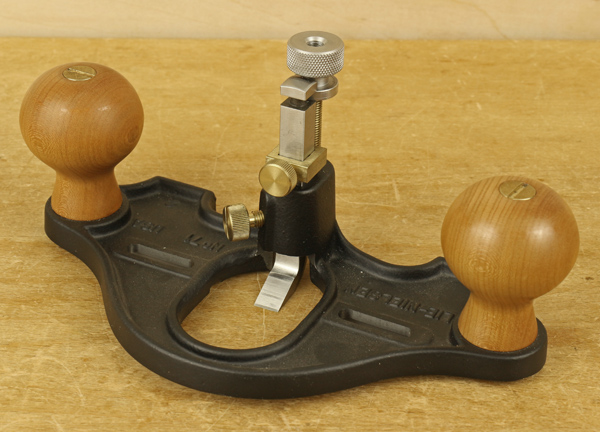 Think of a short L-shaped chisel in a frame that keeps it steady and registers the depth of cut. In fact, early router planes were little more than a shaped thick wooden block with a central opening that housed the cutting iron. Ulmia still makes one, and you can quite easily make your own using a stock manufactured replacement blade. These are simple but effective tools.

Pictured above is a modern router plane. The principal benefit of these is the threaded mechanism that precisely regulates the depth of cut. This makes it easy to advance incrementally to the final depth, which is set by a stop collar on the iron. The model shown is a closed throat design, which means the sole is continuously flat in front of the blade, improving support while preserving a good sight line to the cutting action.

This tool is equipped with a 3/8″ cutting edge, a good all-around size. Also available are narrower blades, useful for inlay work, and V-point blades to cut into acute corners. These planes also come with a small fence that helps with inlay work. Note that the angle of the “L” in a router plane iron is greater than 90 degrees to create clearance for the blade behind its cutting edge. The photo below shows the blade angle relative to the sole of the plane. 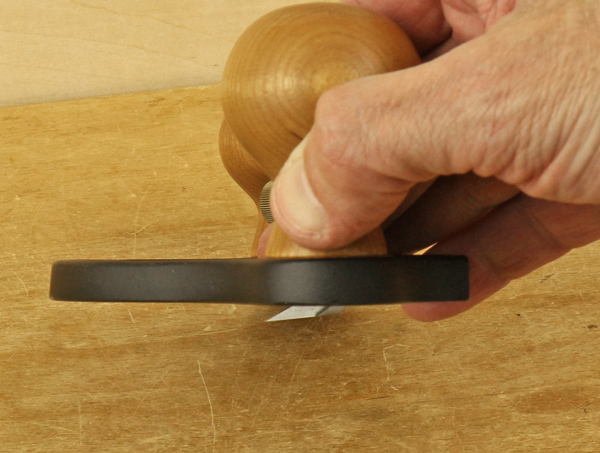 The full size router plane above has a little brother, shown below, which is just as handy. Note that the sole more closely surrounds the blade, which produces better support on narrow surfaces such as when making small mortises for hardware on the end or edge of a door or frame. The 1/4″ blade does not benefit from the nice adjustment mechanism of the large plane but tapping and a little patience still get small-scale work done well. 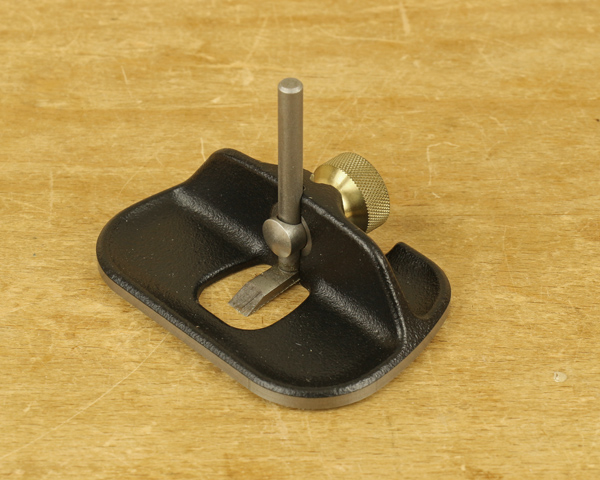 The value of a router plane is its ability to accurately cut a flat surface sunken at a consistent depth relative to the surrounding surface.

A good example is a dado, shown below, which is a simply a cross-grain channel. Hand-tool aficionados like to form this by first sawing the sides, and then chiseling away the bulk of the waste. Finally, the router plane is unsurpassed in finishing the floor of the channel. However, even machine woodworkers will find the router plane valuable to refine dados, and their long-grain analogs, grooves, with incremental precision. The socket of a sliding dovetail, for example, often requires tweaking. A router plane is especially helpful for working into the ends of stopped dados and grooves. 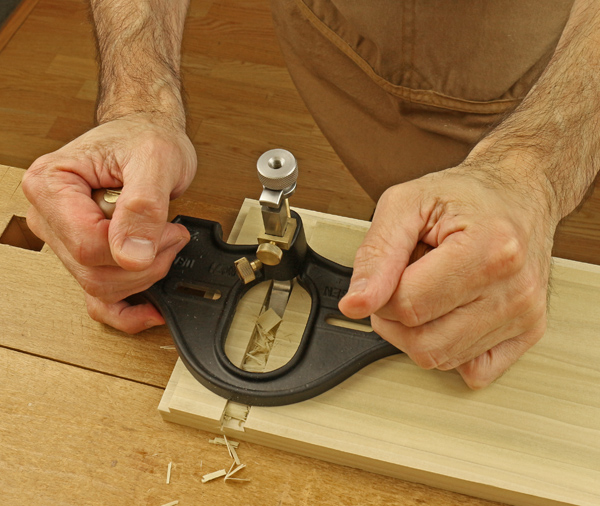 Half lap and bridle joints can be refined with a router plane, whether the bulk of the joint is formed by hand or machine. The half-lap dovetail that is commonly used in carcase work is essentially a stopped, dovetail-shaped half lap joint. As such, a router plane is very handy for accurately leveling up the floor of the socket part of the joint.

Tenon cheeks, whether sawn by hand or machine, often need a bit of trimming and truing. Using a router plane for this, as I am doing below, ensures that the cheek is flat and smooth, but also automatically makes the cheek parallel to the face of the rail. The sole is held firmly on the rail surface and the other end of the tool is worked in a swinging motion across the grain of the tenon cheek. The key, once again, is the tool’s ability to make a flat, smooth surface parallel to the surrounding or adjacent surface, and at a specified, consistent depth. 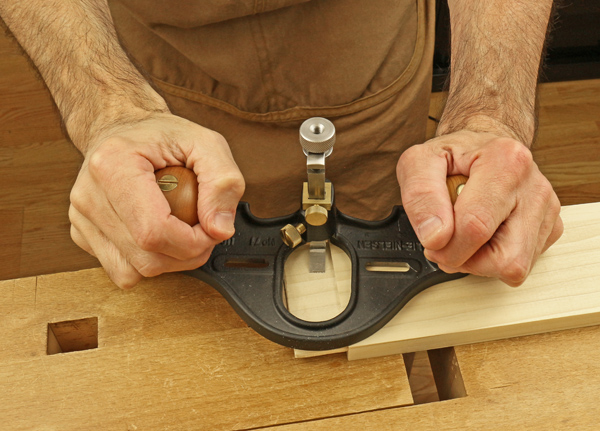 The theme also applies to the shallow mortises required for hinges and other hardware. In the photo below, I’m using my small router plane on the narrow side of a board to finish a hinge mortise after bulking away most of the waste with a chisel. I used the router plane in various directions to form the final mortise, seen in the next photo below. 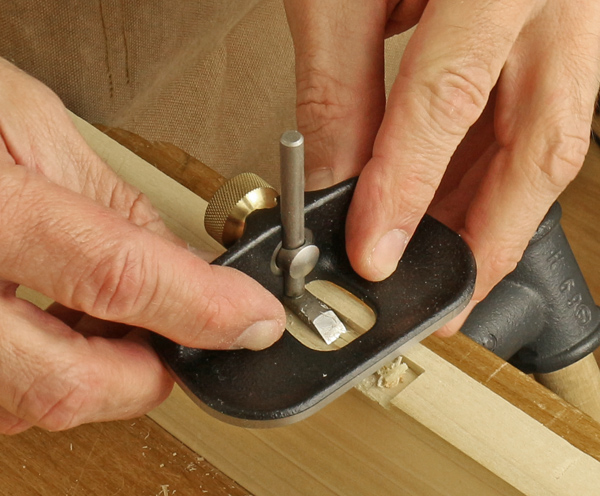 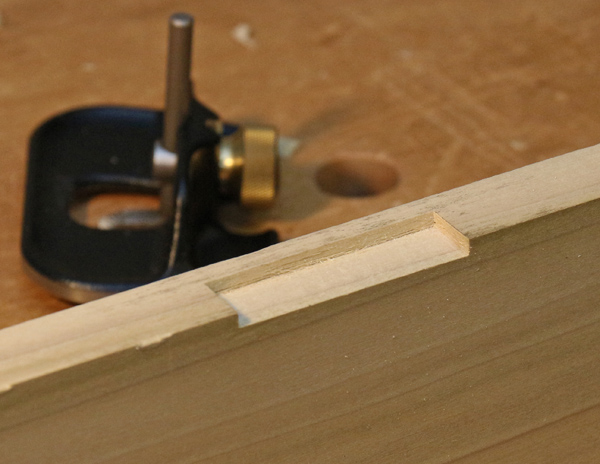 Consistent with its conceptual simplicity, a router plane is a fairly easy tool to use.

Settings are mostly done directly, such as gauging the blade to a hardware layout depth line, rather than by measuring with a rule. Where deeper work must be done in stages with a large router plane, such as a dado, the final depth is set with the stop collar. The blade is then raised to start with manageable shavings, then lowered step by step until the stop collar limits the cut to the desired final depth.

The blade in a router plane is on its own, much like a chisel, in that there is no chipbreaker or sole immediately in front of its edge like in a bench plane. Therefore, particular attention must be paid to the grain direction and to work with or across the grain where possible. It tends to rive when working against the grain, reducing accuracy and surface quality. On the other hand, I find it works most accurately and reliably across the grain.

The blade should, of course, be kept sharp. It is important that the edge is square to the length of the lower section of the “L.” If not, the angle of the blade (described and shown in the first part of this post) will cause one side of the blade to cut deeper than the other, which is antithetical to the virtues of the tool. This takes care and patience at the sharpening stone because the “L” does not permit much range to move the blade back and forth. 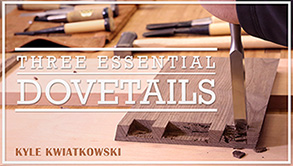 Learn for life! With lifetime access to your classes, you can watch lessons at your preferred pace and easily revisit your favorite concepts with just a click.

Kick up your feet! Enjoy classes anytime from the convenience of your home or even on-the-go with our mobile apps.

Get personalized guidance! Ask your instructor questions to receive all the answers and feedback you need to succeed.

Love it! There’s no risk in trying with our 100% money back guarantee.