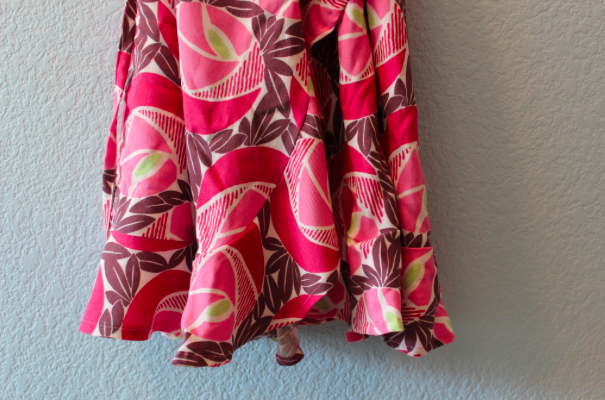 Ruffles can really dress up a dress! There are a few different ways you can accomplish this, and the best method for how to sew ruffles on a dress depends on where you want to add the ruffles.

Here’s how to sew ruffles on a dress, depending on the type of ruffles you are adding:

If you are adding ruffles to the bottom of a dress, you can follow the steps for gathering fabric by machine. Check out this post for the how-to. Once you have your ruffle, pin it to the bottom of the dress (make sure to match up any seams on the ruffle to the body of the dress), right sides together, and sew. If you are having a difficult time maintaining the evenness of the ruffles while sewing, you can also hand baste the ruffle in place before machine sewing. Once the ruffle is sewn on, hem the ruffle and finish the inside seam. With this method you can easily play around with the length and fullness of the ruffle.

If you are adding ruffles to the front of a dress, like on the button band of a shirt dress or on a wrap dress, you will probably want your ruffes to have a bit more drape to them. This can be achieved by cutting the ruffle on the bias of the fabric. I recently constructed a wrap dress from a pattern that had a pretty ingenious method for cutting a long ruffle on the bias without using yards and yards of fabric: the ruffle was cut in a circular coil shape. As a result, the ruffle had a nicely rounded bottom edge, draped beautifully, and because of the way it was cut, required no additional ruffling. It’s now my favorite method for how to sew ruffles on a dress. This method might involve a lot of trial and error if you’re starting from scratch, but it’s worth it’s worth it if you don’t have a never-ending supply of yardage.

Just like with the previous method, once your ruffle is prepared, pin in place, matching any seams. Ruffles cut on the bias might require more pinning and unpinning due to the slight stretch of the fabric. Sew, and then finish the inside seam and raw edge of the ruffle. A narrow rolled hem will work best of this kind of ruffle, and it’s a good opportunity to invest in a hemmer foot for your sewing machine if you don’t have one already. It makes a rolled hem much, much easier.

Another option for adding ruffles to a dress is to add them in layers around the body of the dress. This works best when you are using a tube dress as your base. It’s a really cute option for little girls but works for adult women, too! The ruffles you will use for this dress are called circular ruffles, and they resemble a donut when you cut them out: a larger circle with a smaller circle cut out of the center. The size difference between the inner and outer circles will dictate the amount of ruffle: a larger inner circle will give you softer, drapier ruffles while a smaller inner circle will result in a more voluminous ruffle. The length of the ruffles can be as long or as short as you want. It’s a good idea to hem the ruffles before adding them to the dress. To sew the ruffles on the dress, start from the bottom hem of the dress, layering the ruffles slightly as you go. The idea is to cover the stitching of the ruffle underneath with the hem of the ruffle you are adding.

Have you added ruffles to a dress? What’s your favorite method?