An air show brings back childhood fantasies of flying plastic planes and yearning to be that Top Gun pilot that seems invincible. That’s probably why you will see generations of families sitting on lawn chairs — grandfathers, fathers and young boys– all with a camera in hand, trying to recapture those childhood fantasies. 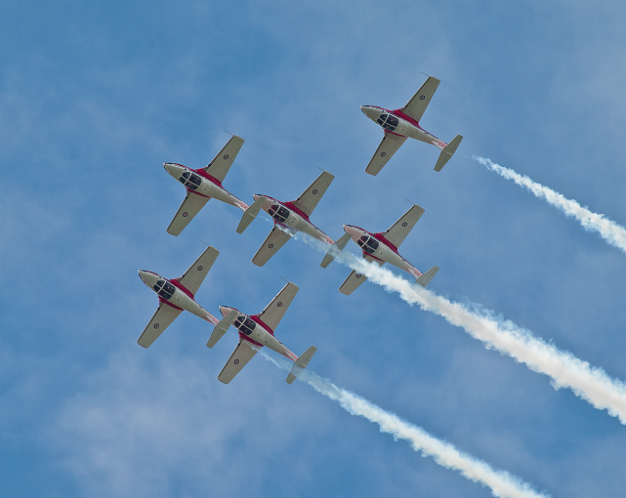 As with any photographic genre, cameras for these types of events can be quite expensive. Just remember, it’s not always the gear that takes the great photo, it’s the space between your two ears that will make your photos better than the others.

Let’s dive into ideal gear and some tips for getting the best shots!

My gear that I took to the Waterloo air show this year:

Olympus E-30 DSLR and a tripod to rest the camera with larger telephoto lenses on it. (Although, using such fast shutter speeds can eliminate the need for a monopod.)

Olympus 50-200mm f2.8-3.5 for those flybys at low level and crowd photos, 2x teleconverter to stretch out the focal length to capture high flying aerials, and I brought my Olympus 11-22mm f2.8-3.5 wide angle for some ground photos offering a different perspective. Wide-angle lenses are a big help for ground photos as they yield dramatic perspectives. They also allow you to get close enough to the aircraft to eliminate foreground clutter and still fit the entire craft into the frame.

I always carry spare batteries. At any given time in my camera bag I will have three spare batteries to make sure I have enough. I will also go through over 1,000 shots quite easily at an air show in a couple hours. For memory, I like to use as fast a memory card as possible as I will be shooting in burst mode. I will take two 16 gig memory cards and probably go through almost both of them. The really big acts happen towards the end of the show. Nothing is more irritating than an excellent day of shooting only to discover you only have 14 shots left on your last memory card to shoot the display you have been waiting all day to see.

Wear a hat! Keep the sun off your head. Cargo pants because I do not know the rules where you live, but some air shows will sometimes not let you bring in camera bags; therefore all the various pockets in the cargo pants will come in handy for carrying your various items. But before you stuff all that loosely into your various pockets, put everything in Ziploc bags to keep them safe.

OK, now let’s get into the photography tips:

1. Practice shooting other fast moving subjects before you get to the air show. Expect to use the first day of an air show as your practice day, getting down the timing you will need to capture good photographs of planes in flight.

2. A general rule is “Put your camera on shutter priority and do not shoot at a speed slower than twice the length of the longest part of the lens you are using.” In other words, if you are using a 100-400mm lens, shoot no lower than 1/800. There is a notable exception to this generalization: anything with a propeller. Propeller driven aircrafts are a challenge. If you shoot them at a high shutter speed the image you capture will be unnatural looking in that the propeller will be frozen in flight. A much better alternative is to lower the shutter speed and capture the ever elusive “propeller blur.”

3. Prop blur occurs when the shutter speed is adequately slow enough to capture at least some of the arc of the tip of the propeller. This can be achieved if you shoot anywhere from 1/125 to 1/180, but the results are hit and miss, which leads me to this, shoot in continuous mode.

4. Another thing you could always do it to just put the camera on shutter priority and shoot at 1/1000th of a second in the hopes that this will help to eliminate blurriness caused by hand shake. For the average photographer this will work just fine. However, all other things being equal in shutter priority, increasing the shutter speed simultaneously adjusts your aperture, resulting in blurriness because of decreased depth of field. So increasing the shutter speed isn’t a perfect solution.

5. Personally I like to pan with flying images at a fairly high shutter speed. I set my camera on manual mode, set the aperture to a mid range, F5.6 to F11, depending on brightness, and set my shutter speeds up around 1/800. Again, depending on how bright the day it. It’s just one of those things you will have to determine that day. I adjust for the light and fine tune with my ISO and EV to get the right exposure. I am not a firm believer in stretching the limits of my gear. I rarely shoot at full focal length or at an aperture of an f2.8.

6. Now when it comes to shots of the crowds or photos of stationary airplanes, I’ll jump over to aperture priority mode. With most air shows occurring in reasonably good weather, worrying about the amount of light while shooting a lower aperture generally isn’t a problem. Shoot whatever you feel comfortable with. I generally choose an aperture of f9.0, or some mid range f-stop to get the optimum image out of my lens. Occasionally I will dial it down to f2.8 if I am focused on macro images.

7. Choose your location wisely. Get to the show early to scope out the best possible location to shoot. How do you find that best spot? The best spot is where all the photographers with the big lenses will be standing. Don’t let them intimidate you. Nuzzle up and remember my first piece of advice. The composition and the quality of the photos are greatly influenced by what’s between your ears, not the 24 inches of steel the guy beside you has. If you get there early enough you’ll be rewarded by being right on the fence thus preventing the little kids from getting in front of you and ruining your shot. Once you get the prime spot, set up your chairs and umbrellas, settle back and guard your patch.

8. Be prepared for some disappointment: missed timing with half a plane in the frame, blurry shots, or someone’s head in the way. But seeing that you are shooting in the digital format, if you have the memory capacity, shoot to your heart’s content. But do not delete anything until you have had a chance to look at the images on the computer. You never know what you will miss happening in the air while you’re deleting those shots at the show.

An air show can be a lot of fun. Don’t get so engrossed in shooting that you forget to have a good time with your family. It’s good to have some beautiful shots for your portfolio, but living the excitement with your child is more important.