V-neck bindings on knit T-shirts can be the trickiest to sew, because of the V-neck itself. Rounded necklines can be sewn with in one pass without any fuss or pivots, but the V-neck has a center focal point that needs to be sewn perfectly.

Learn a simple technique for sewing a V-neck binding flawlessly! 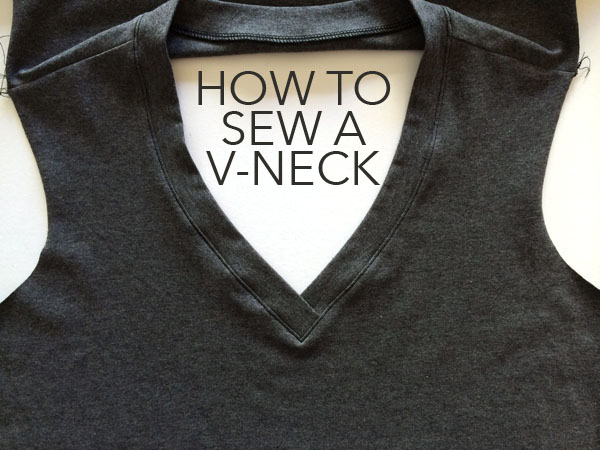 Different approaches to sewing a V-neck

There are many approaches to sewing a V-neck binding on a knit garment, and the two most common are the overlap method, as pictured above, or a center seam method. The latter is where the binding has a seam directly down the center of the binding, in line with the center point of the V-neck. This approach is more than acceptable, but personally I can find the seam to be bulky and unless you sew it perfectly, it will always look off center.

The overlap method is far easier to sew and looks just as polished, if not more, depending on your tastes. If your project calls for a center seam but you want to switch your binding to an overlap, you do not have to change much at all. Since the center seam would have seam allowance added in, that little bit will likely be enough to allow you to switch it up. Just be sure that the short ends of the binding are cut at a 90-degree angle with the long sides, as many center seam V-necks are shaped for sewing.

Okay, are you ready? Let’s sew! 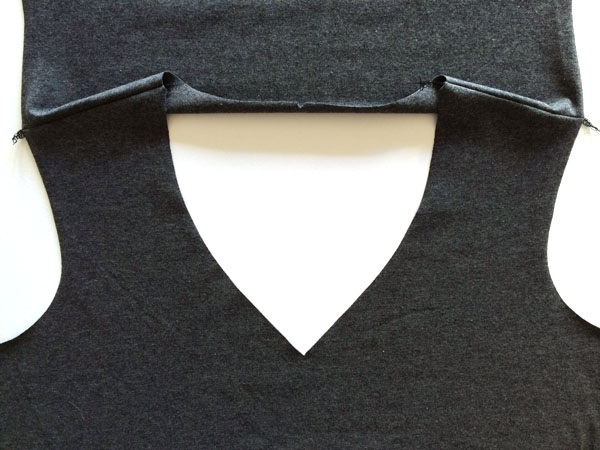 Sew the front of the shirt to the back of the shirt along the shoulder seams. If the project instructs you to sew the sleeves and side seams first, know that it is actually a lot easier to sew the neck binding while the top is still open flat. So now is the perfect moment to do the binding, regardless of what your pattern says. 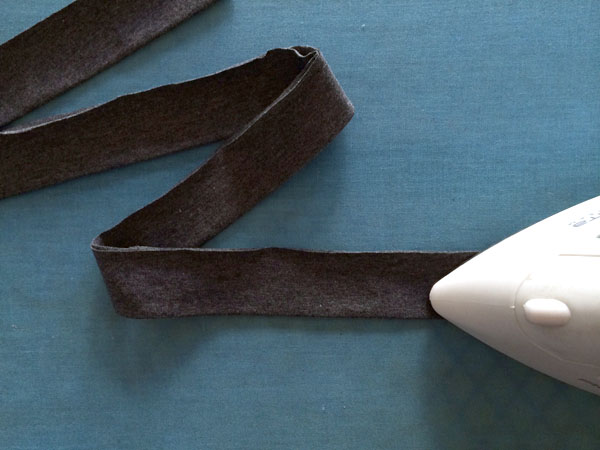 Prepare the binding by folding the length in half with wrong sides facing each other. Press along the center, keeping the raw edges in line so the binding stays consistent in size throughout the entire length. 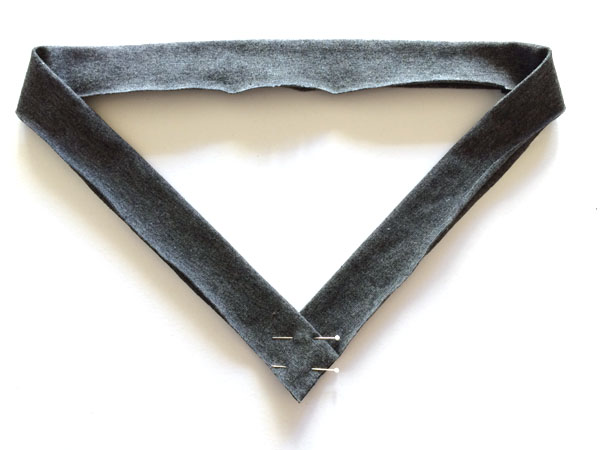 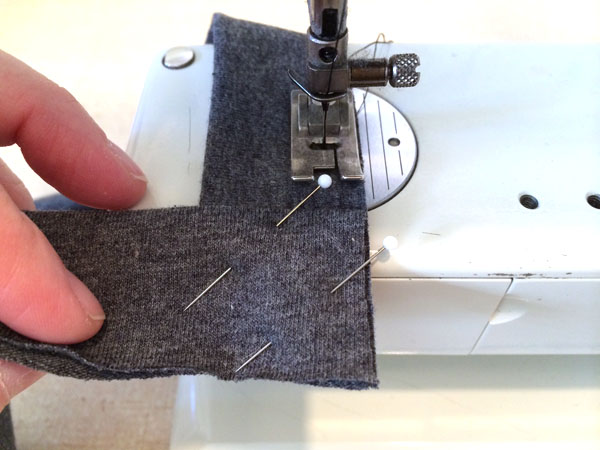 Take the binding to your machine and sew with a baste stitch just before and after the V at the center. Be sure to sew this at the project’s seam allowance and to pivot perfectly at the center V. 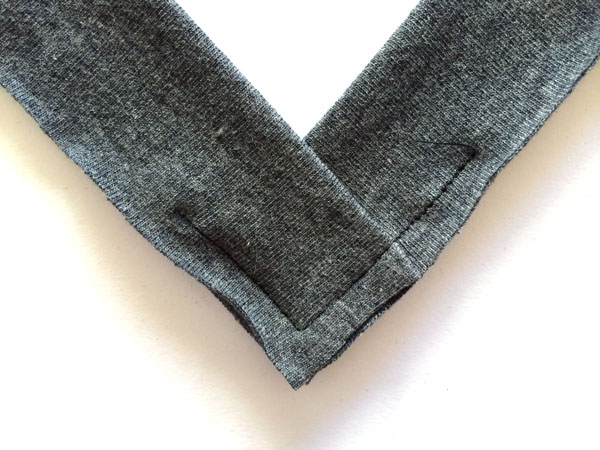 Your binding should look like this one above. My baste stitch is longer on the right side than the left, but this does not matter as it just needs to hold the overlap in place and the stitch will be removed later, so do not worry if yours looks like this too! 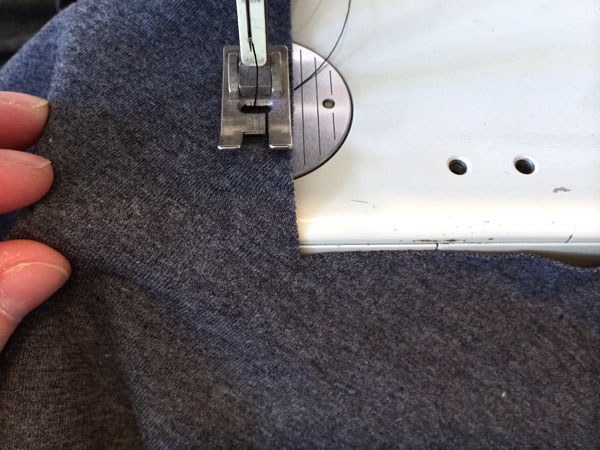 Repeat the baste stitch as you did on the binding, this time on the V of the shirt itself. Again, sew a few inches before and after the center pivot and make sure to sew and pivot at the project’s seam allowance. 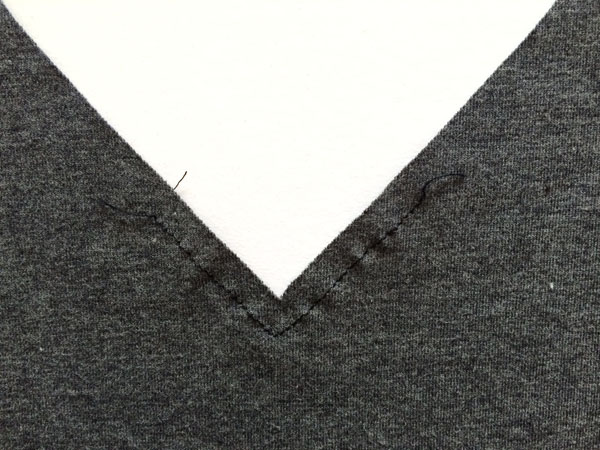 Above is what your shirt front should look like now with the baste stitch sewn. 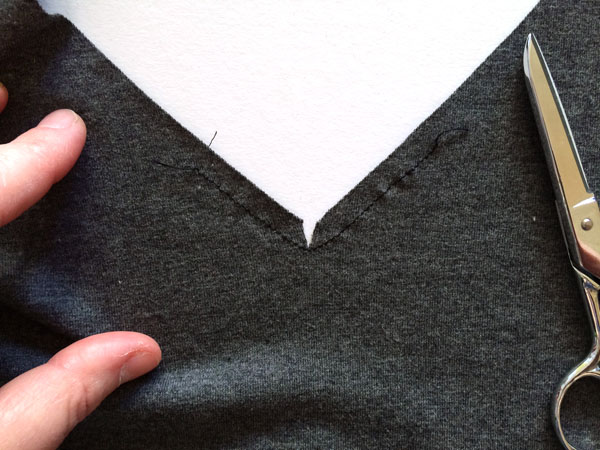 In order to sew the binding to the neckline, we need to allow for the center V to open up. Clip a slit into the seam allowance directly at the center point. Absolutely do not over cut and do not cut beyond the stitching. This will result in a hole at the most visible spot on your shirt. 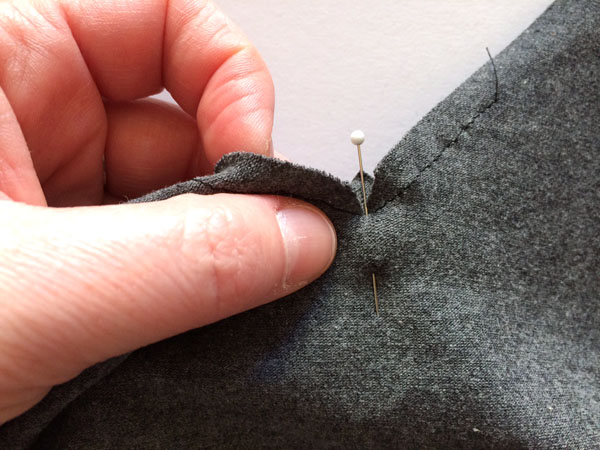 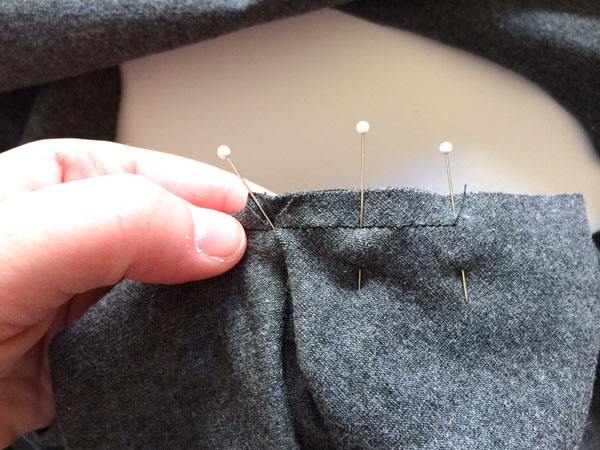 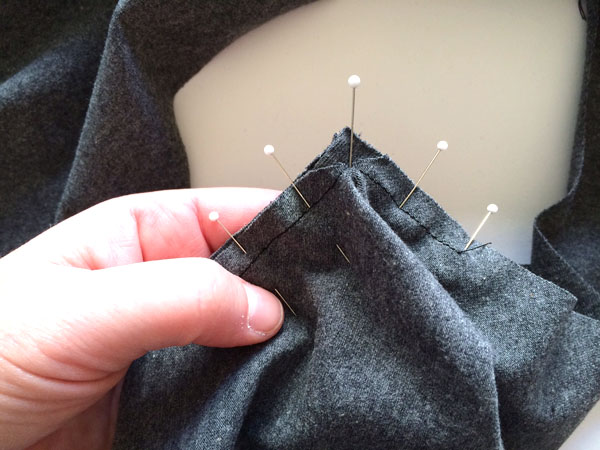 Repeat step 10 on the other side of the V, again keeping the raw edges together and allowing the clip made at the center V to spread open. 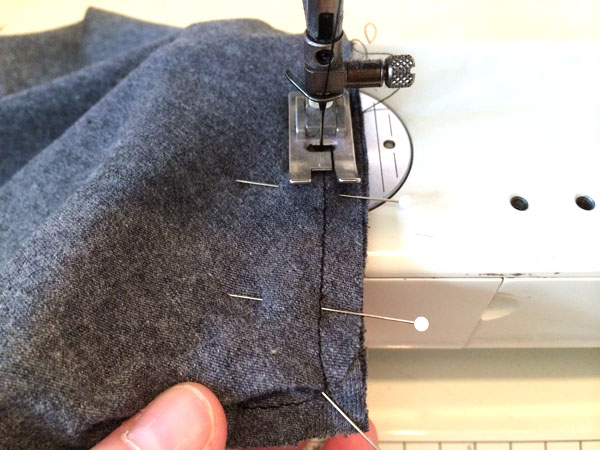 We pinned along the shirt side and not the binding side of the seam because it is much better to sew this step with the shirt up. This will allow you to see the fabric of the shirt at the v-neck and to keep it out of the way when making the pivot.

Sew along the seam allowance, just at the V where the two pieces were marked with baste stitches. Be extremely careful to pivot directly at the pivot point for both pieces, and keep the shirt fabric out of the way while doing so. 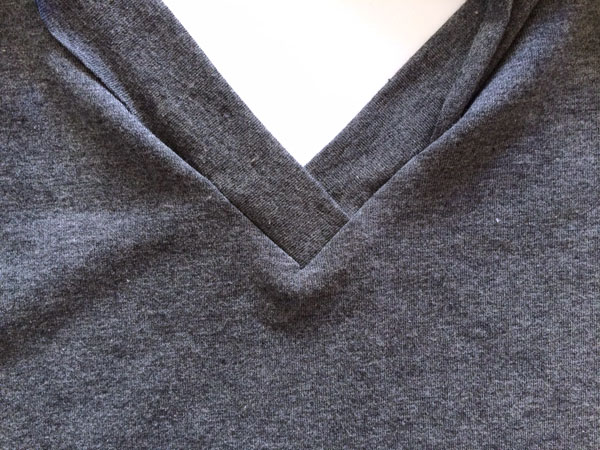 Your shirt should now look like mine does above. None of the rest of the v-neck is sewn yet, but the couple of inches on either side of the V itself. If you have any baste stitches showing, leave them until after the whole binding is sewn. 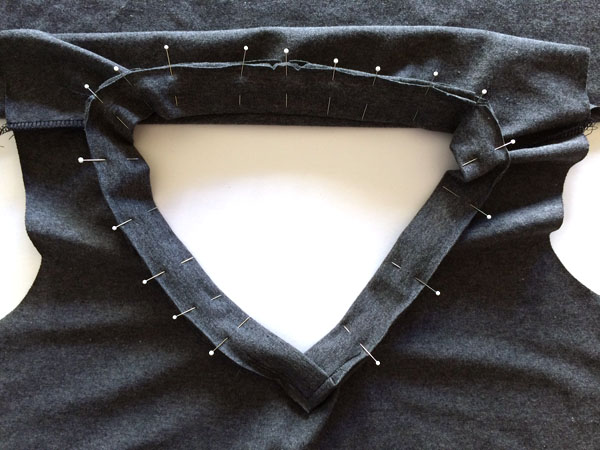 Pin the rest of the neck binding to the neckline, making sure to match any notches from the pattern’s instructions. Keep the raw edges together and stretch the binding to fit if necessary. 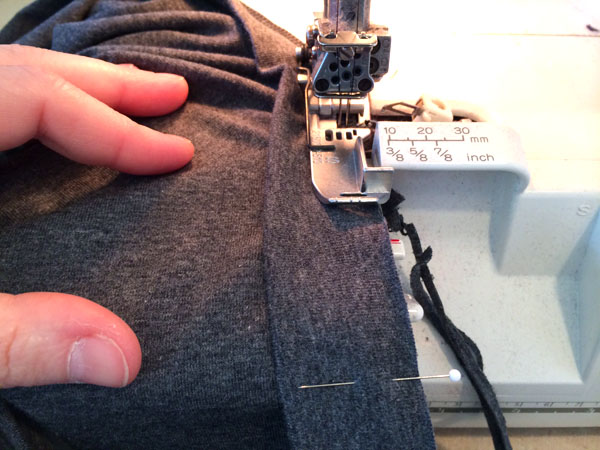 This step can be sewn with a serger (overlock) machine or a conventional machine. For a serger, start at the bottom of the V, work around the rest of the neckline, then end by sewing off the other side of the V at the center front of the shirt.

Be careful not to catch the shirt in the stitching or the blade of the serger knife while sewing. Since the shirt is already basted at the V at the project’s seam allowance, it should sew together perfectly. 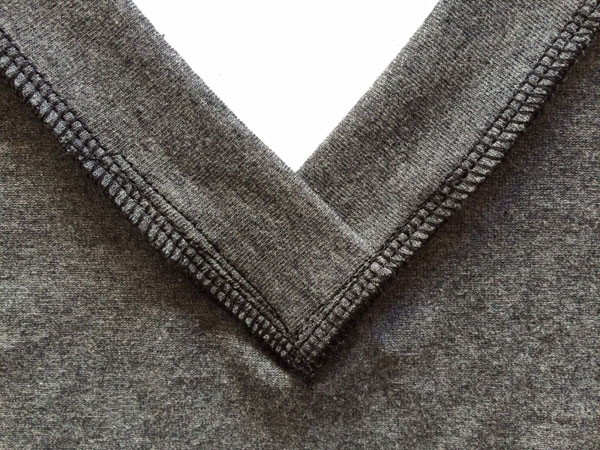 The inside of your shirt will now look something like this does above. If you have any baste stitches showing, now is when you want to remove them. Be extra careful not to cut the construction stitch in the process. 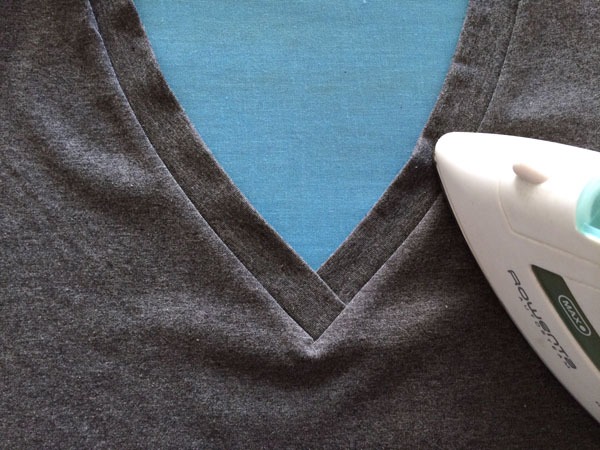 Turn the shirt right side out and press the seam allowance away from the neck opening. The v-neck can be left as is, but if you want to stitch the seam allowance to the shirt, you can choose to top stitch it. This is commonly done in store bought t-shirts, but it is a matter of personal taste. 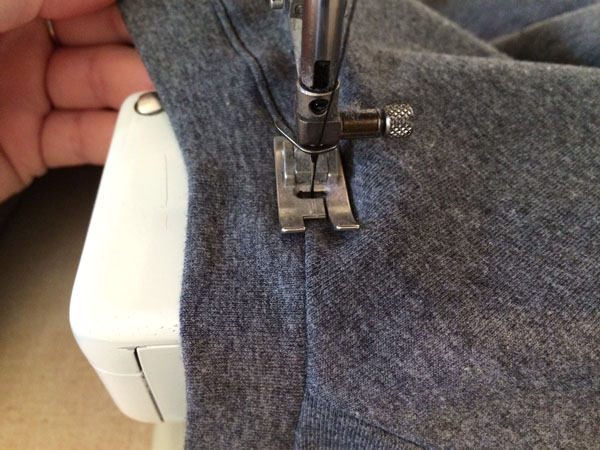 If you are choosing to top stitch the neckline, simply sew around the seam with your conventional machine. Remember to sew close enough to catch the seam allowance on the inside of the shirt. 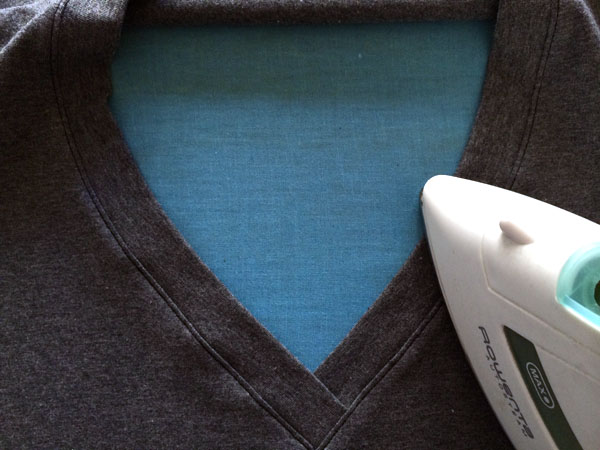 Press again after top stitching to flatten the seam. 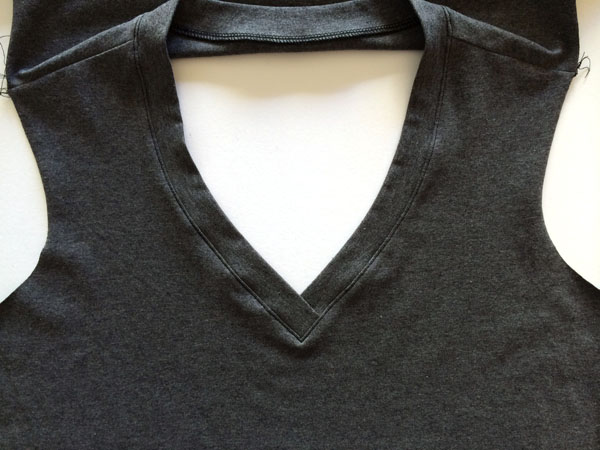 And that is it! From here you can carry on with the rest of your project by finishing the armholes and side seams.

One Response to “Sewing Knit Necklines: How to Make a V-Neck”