Have you ever learned the proper way to hold a knife?

There’s more than one reason why culinary schools spend so much time on knife skills before they move on to the art of creating delicious food. For one thing, learning proper knife skills helps ensure safety in the kitchen, keeping food, not fingers, on the chopping block. For another, proper knife handling can ensure precision and consistency in food cuts, which can result in more even cooking and more professional results. 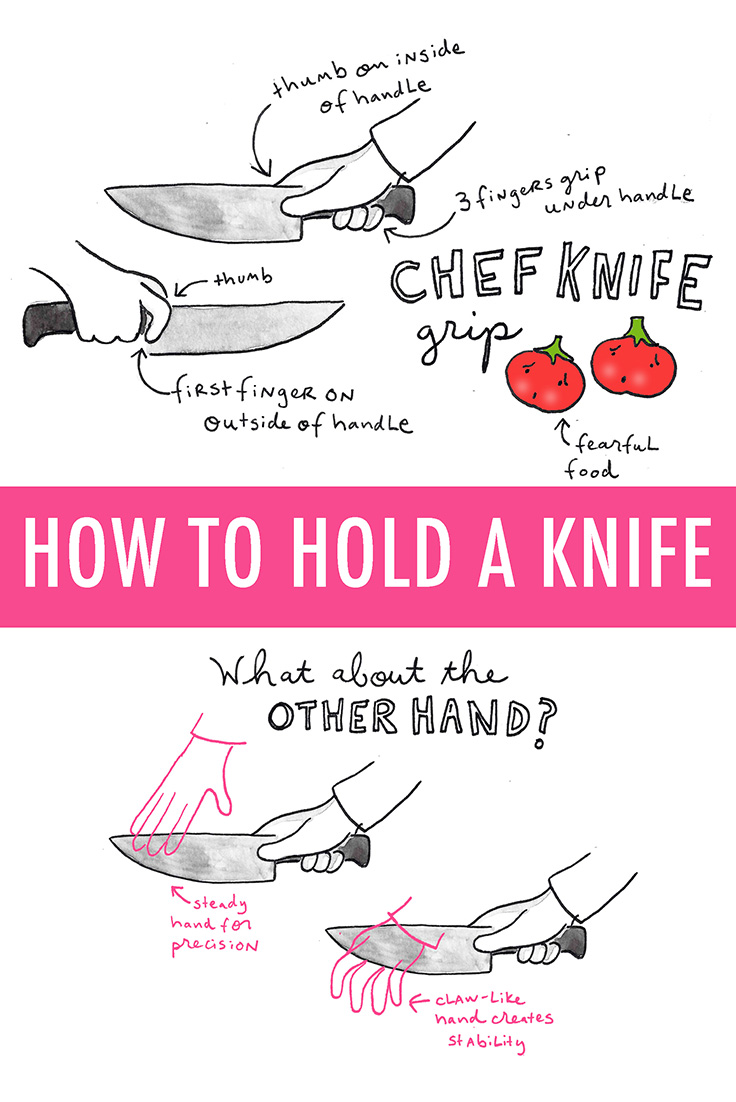 Learn the proper way to hold a knife and why it matters with this illustrated guide!

The proper, go-to chef’s knife grip goes a little like this: 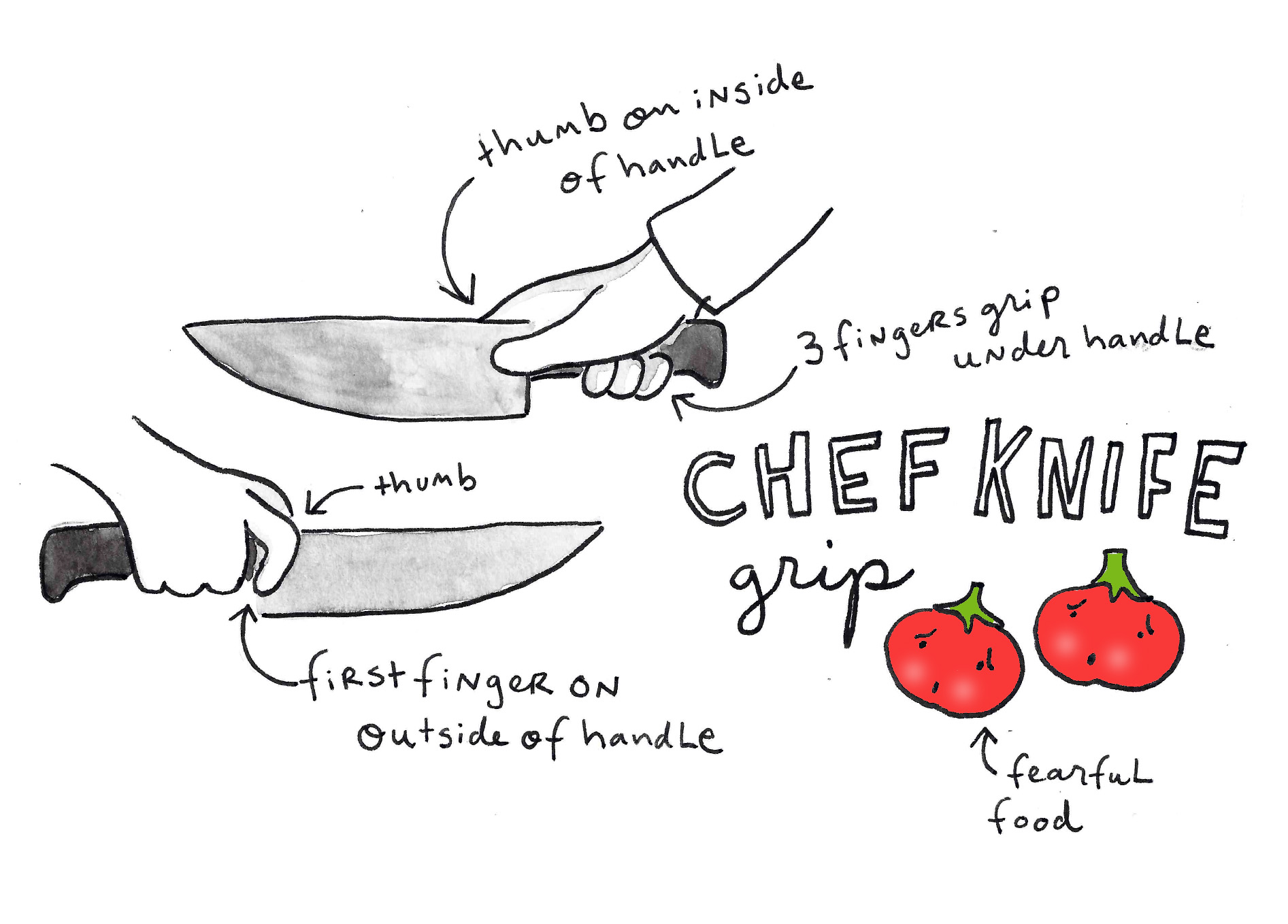 The hand that is holding the knife is not simply clutching it within a fist. The thumb rests on the inside of the knife, safely above the sharpened blade. The forefinger is slightly bent, and gently “hooks” the outside of the knife, right around where the blade meets the handle, but once again, at a safe distance from the sharp blade. The positioning of the thumb and forefinger allows the chef to properly direct and guide the blade, so that it the knife can be used to cut exactly where he or she wants.

Of course, this may lead to an important follow-up question…

What about the other hand?

Where is the hand that isn’t holding the knife? While it’s not as active in knife work, it’s no less important: it can be used to help “aim” the knife in the right direction, provide stability, and keep food in place while you cut. These are two of the most common positions for the second hand: 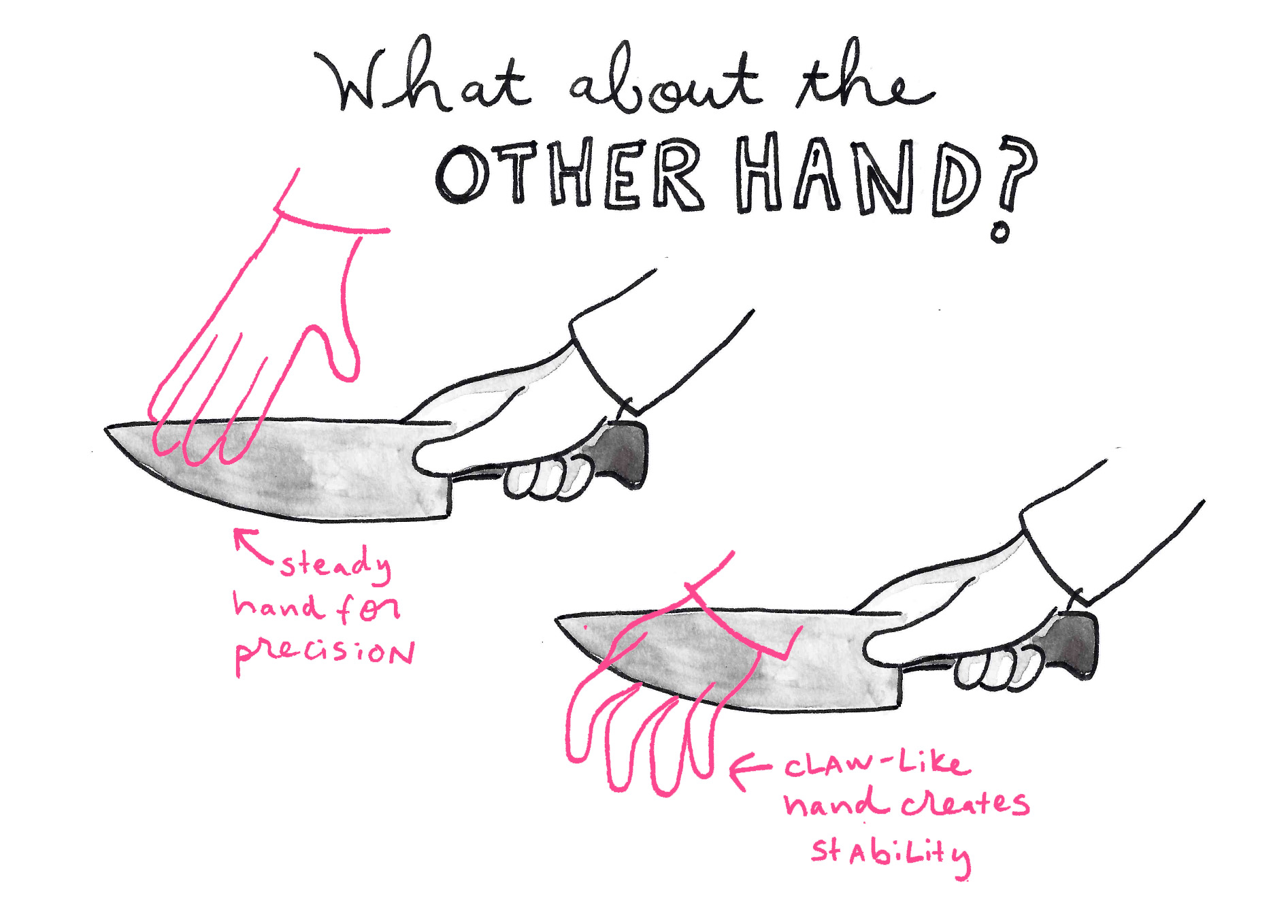 In the top left illustration, you see that the fingers of the second hand are perched gently on the top of the knife, at a safe distance from the sharp blade. As the primary hand holding the knife cuts in a rocking motion, the position of the second hand allows control and aim in your cutting. This hand position is fantastic for mincing.

In the bottom right illustration, the second hand is poised like a claw inside of the knife. Imagine a piece of food, such as a tomato, within that claw hand. The second hand keeps the food and the knife stable, so that you can cut controlled portions, and neither the knife nor food will slip out of your grasp.

While the above graphics portray the classic way to hold a knife, these other grips are worth discussing for a few moments.

This knife grip is pretty straightforward: 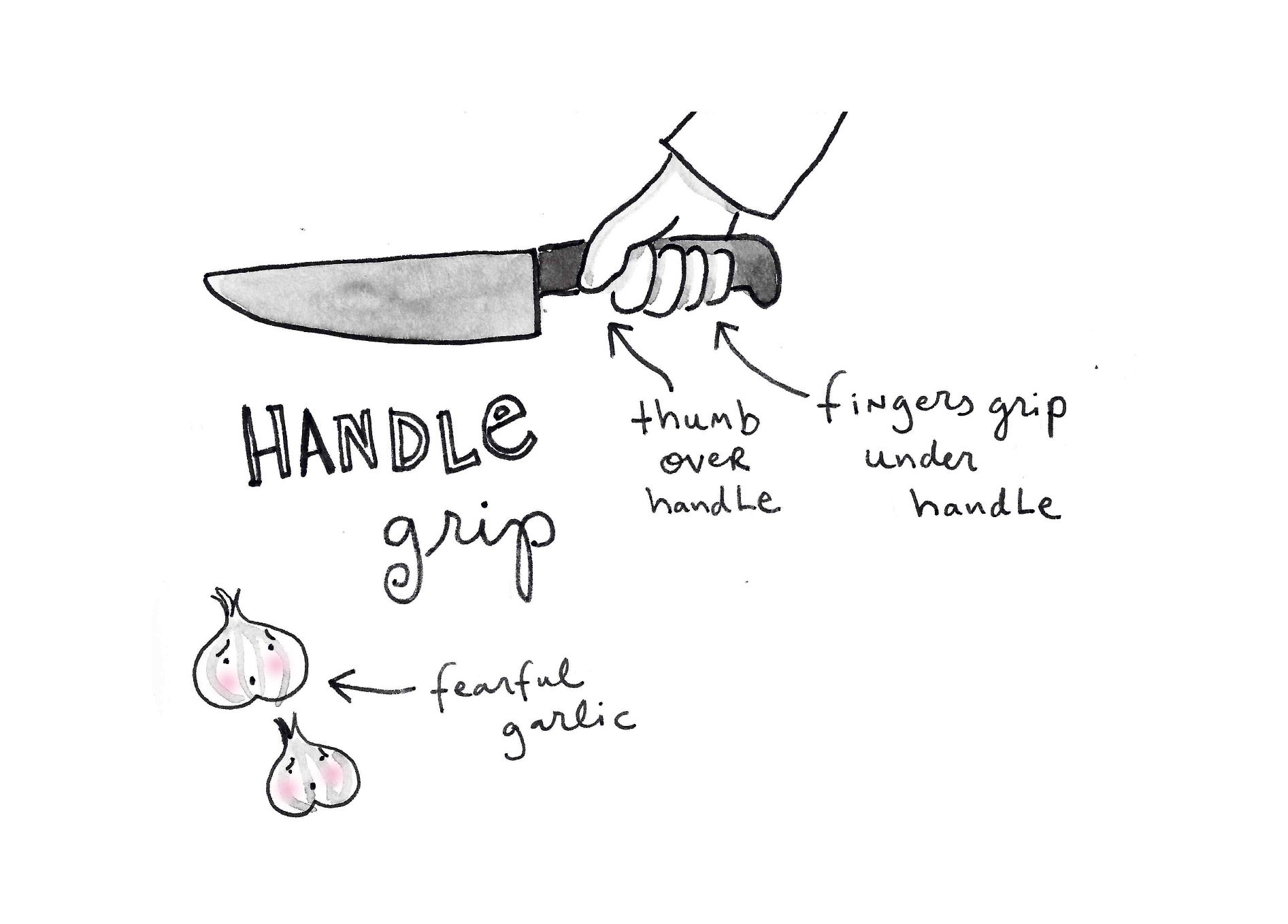 With the handle grip, the dominant hand is curled around the handle of the knife, almost like how you would hold the handle of a jumping rope. This is a common grip for people who have smaller hands, or to chefs who are new to knife work. While it’s not a terrible grip, it should primarily be considered a starting point. For many children, they begin to write by clutching pencils and crayons like this, but as they become more practiced and dexterous, they graduate to a grip, which allows them more control. A proper knife grip is kind of like that. Once you’ve graduated from this handle grip, you can move on to the more refined grip described above.

That having been said, this handle grip is very effective when you are using the knife aligned sideways to smash a fairly soft ingredient, such as a garlic bulb. The non-dominant hand would be used to put pressure on the sideways blade from above, which would result in smashing the item in question.

This grip is characterized primarily by the positioning of the forefinger on the knife. 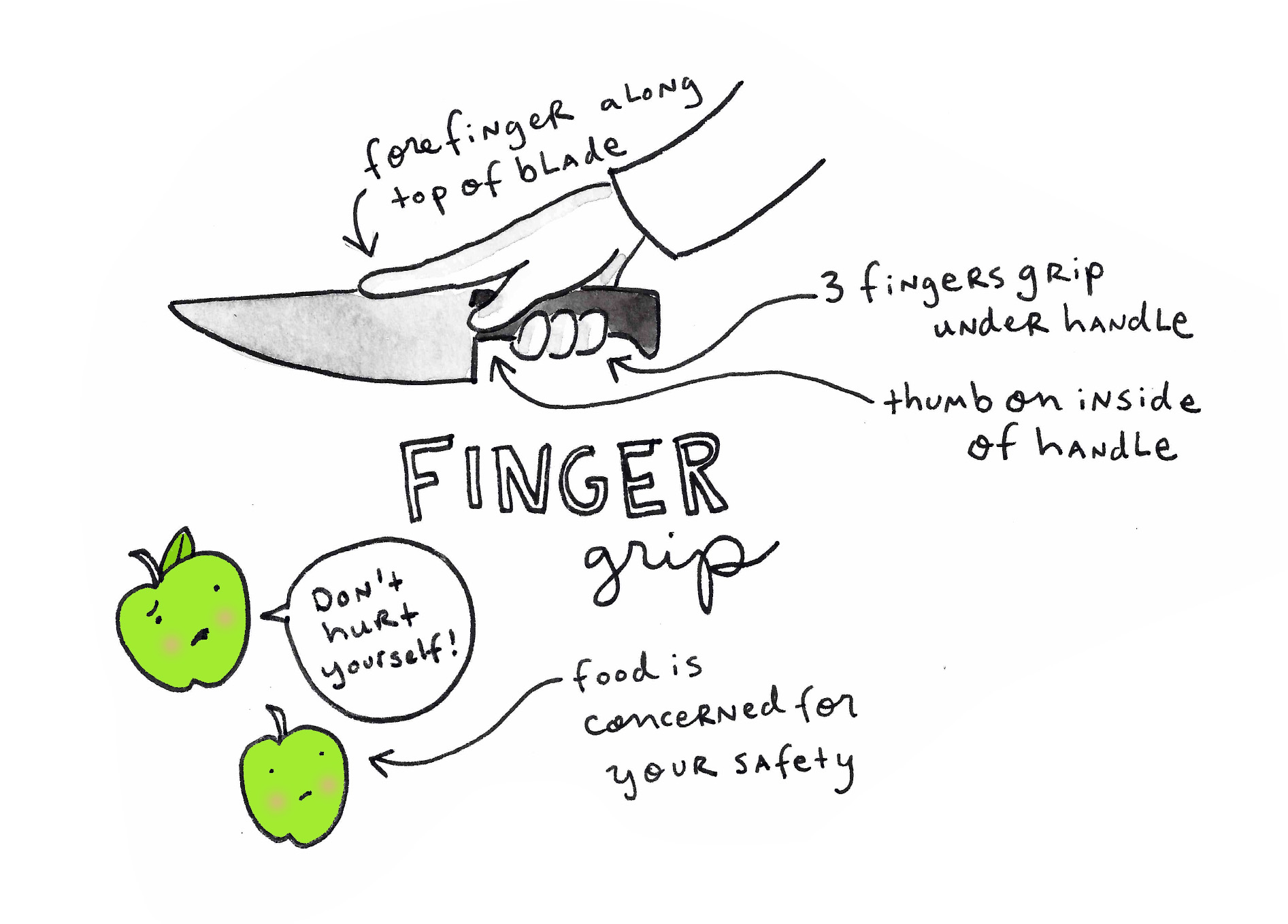 Many believe that the forefinger perched along the line of the knife is a great way to increase precision and aim in their cutting. However, this is not quite the case. There isn’t much stability from side to side with this grip, which means that if that top finger slips off of the knife, it could end up right on the cutting block. Ouch!

While this might seem like a natural way to hold a knife and might seem easier at first than the proper way to hold a chef’s knife, the risk of potential harm is too great to make it an ideal choice for knife handling.  While the top method might seem awkward and strange at first, stick with it: the precision and speed will come with time.

Want to improve your knife skills? Free Bluprint course Complete Knife Skills will have you (safely!) brandishing your chef’s knife like a pro in no time.