Drawing and painting bricks is easier on the back than actually laying bricks, but you still have to put them together one at a time.

Follow along to learn how to draw brick and paint your finished product. 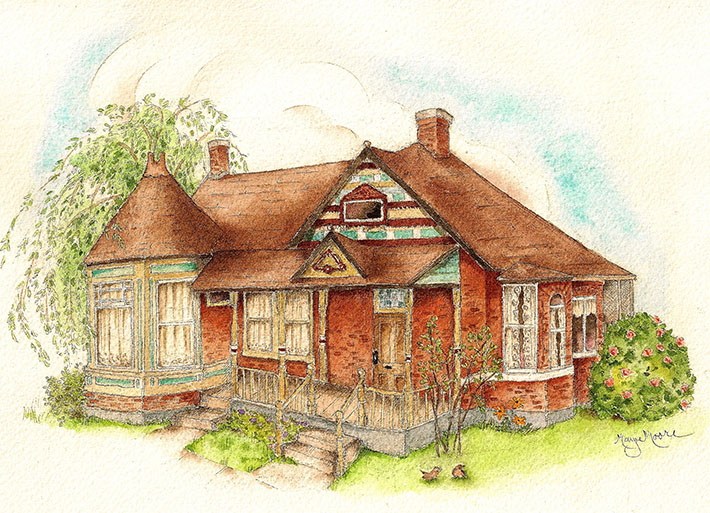 Though I will admit that I don’t always look forward to the tedium of drawing a brick structure, once I get going on it, it is sort of relaxing. And you can make it interesting by changing the shapes or patterns of the bricks, adding cracks, sagging old brick layers and using variations in the brick colors.

Bricks or stonework in general can really catch your eye in a piece of art so it is valuable to add it to your ever growing artistic skills.

As silly as this sounds, your first row of bricks has to be planned out just as if your were working with real bricks and mortar. Well, at least in the artistic sense. Even if you want your bricks to have an aged look with a little sagging, you want the first row to reflect this positioning.

This beginning stage may take a little longer with lots of erasing and maybe a little hair pulling, but hang in there, it will work out in the end!

Using a chimney for my sample and perspective, my first line of bricks is drawn in. This row will be your guide for the rest of the brick placement in your drawing.

Step 2.  Draw the rest of your brick pattern.

My second row of bricks alternates in position with the first row — the bricks start and end at the halfway mark with the brick above it.

After this row, follow the same alternating pattern for the remainder of your structure. Trust me, it will get easier as you move along.

I gave my whole chimney a wash with a mix of sepia and cadmium yellow watered down until it looked beige. This colors the cement the bricks are held together with, your background.

It is best to paint the bricks one at a time unless you are doing a large brick structure where you can blend the bricks together in places as in the house painting at the top of this post.

Some nice watercolor mixes for bricks are indian red with browns, yellows or even red orange. Notice that my bricks have a little variety of shades. This will make your brickwork look more interesting thus your artwork more appealing.

Continue on until the bricks are all painted.

Step back and look to see if you need to darken a few bricks up a little. It will look best with varying shades of lighter and darker bricks.

Step 4. Add detailing and highlighting to make your brickwork stand out.

Since there is a cement edge on the top of the chimney, it was a great opportunity to shade the bricks right under its lower edge, creating come nice contrast.

I have added a strip of shading under some of the individual bricks creating a shadow. This will enhance and highlight the bricks.

Perspective and depth are achieved by deepening the color of the shady side of the chimney.

On last look, I thought the chimney could benefit by a deepening the shade of a few more bricks. I wet them and then dabbed in more color and let it pool and dry without brush strokes. This gave the effect of time and weathering of the bricks. 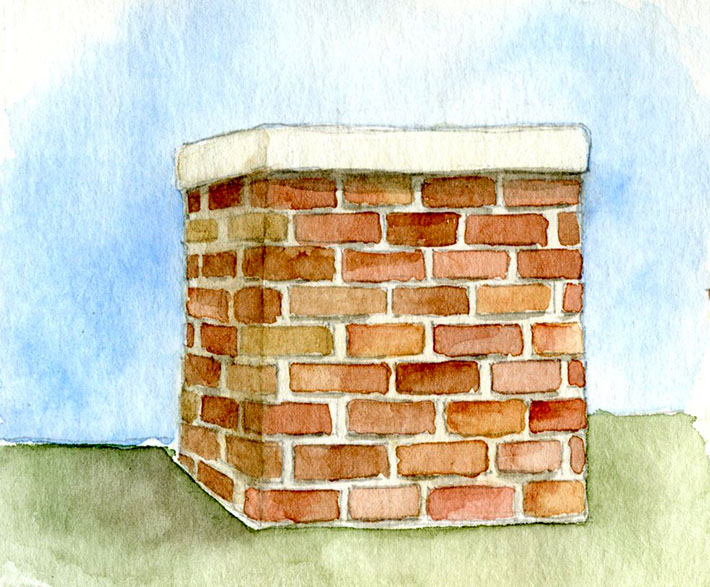 Have you ever painted a brick structure? What brick pattern did you use?