Do you know how to cook artichokes? While many people love the unique, nutty-buttery flavor of this unique-looking vegetable, many are also intimidated by the actual process of cooking them. 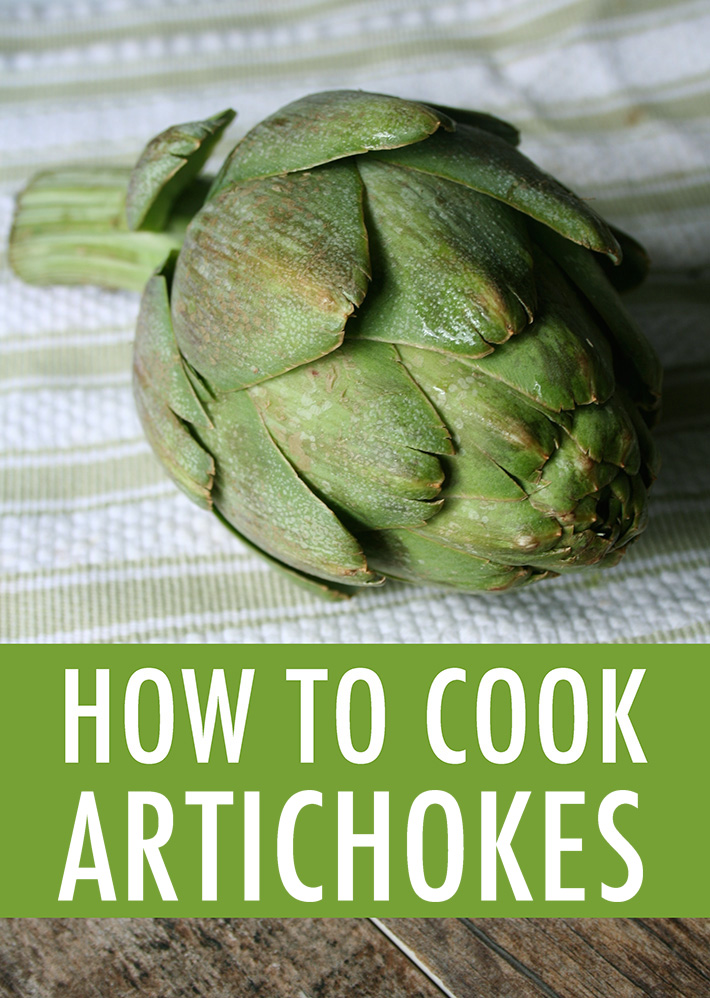 Artichokes are not difficult to cook, but they do require specific techniques. This post will educate you on how to prep and cook artichokes, so that you can expand your culinary horizons and create all sorts of delicious vegetable dishes with your newfound skills. 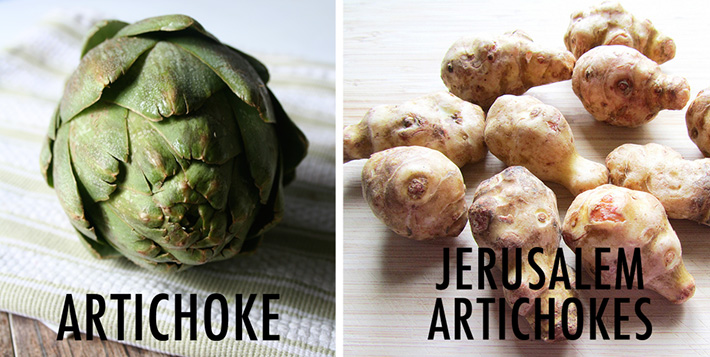 Before you learn how to cook an artichoke, it may be helpful to learn a bit more about its backstory.

When we refer to artichokes in a culinary sense, the type in question is most frequently the “globe” artichoke. Visually, you’re not likely to confuse it with the other key type of artichoke used in cooking, the Jerusalem artichoke, which is actually a tuber from a breed of sunflowers, resemble mini lumpy potatoes, and are treated like a root vegetable.

Globe artichokes (though we’ll stick to plain old “artichoke” from here out) are a visual wonder and certainly the vegetable most likely to be carved on decorative posts: a green orb composed of what look like tightly budded small, symmetrical green leaves. They are actually part of the thistle family; what we eat is actually a tight flower bud, which is only suitable for cooking before the flower blooms. Once the flower does bloom, the texture changes, rendering the artichoke unsuitable for eating, but it is awfully pretty: 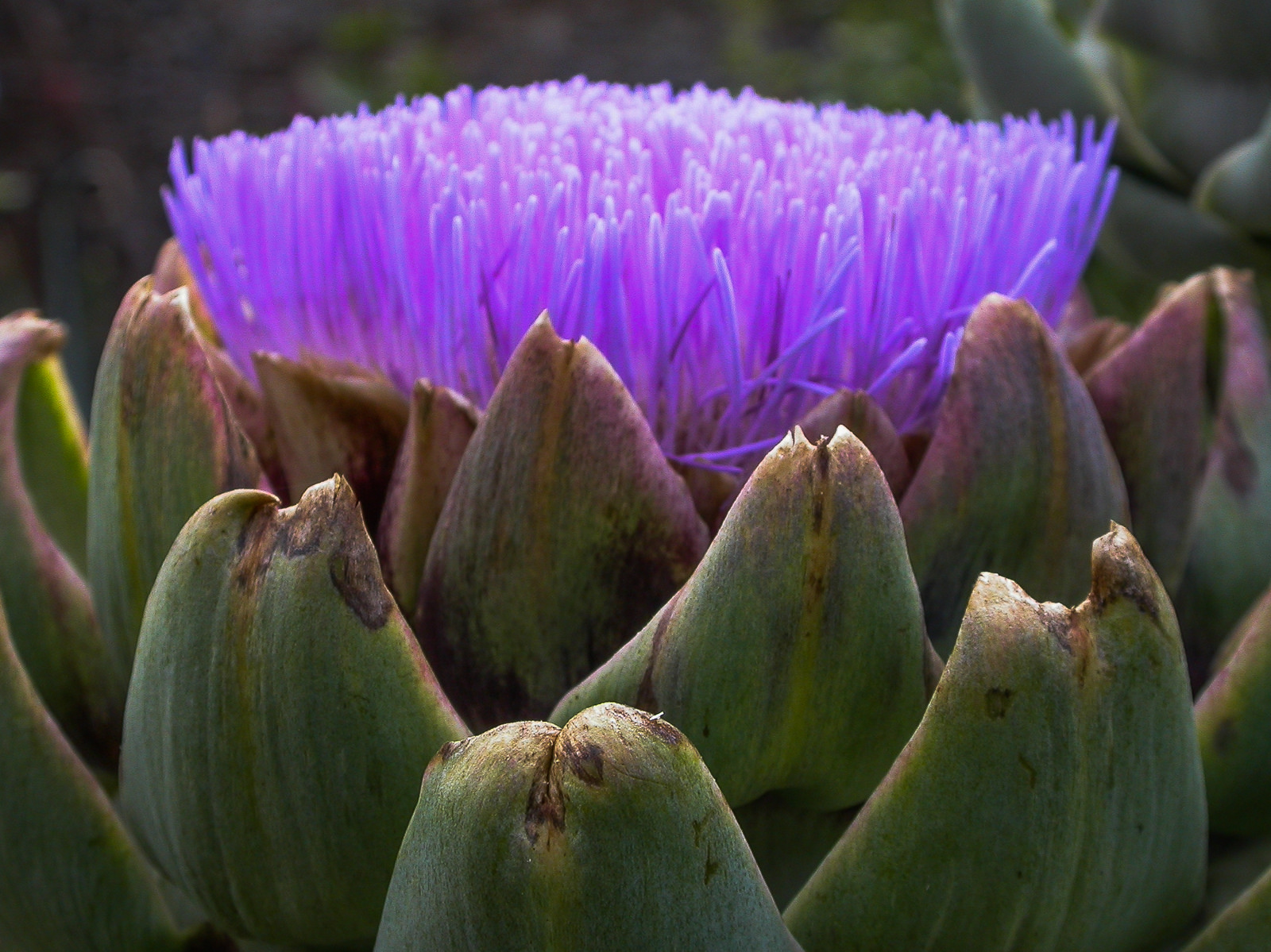 In terms of cultivation, the artichoke is native to the Mediterranean, and was consumed as a food as early as the days of ancient Greeks and Romans. The custom was ultimately introduced to England, where artichokes are said to have been grown in Henry VIII’s garden. Early settlers brought artichokes to the United States of America, in particular French immigrants to Louisiana and Spanish Immigrants in California.

While artichokes are grown and available year-round, they are considered at their peak from March through May. They thrive in foggy, cool climates without extreme heat or cold, so it’s no surprise that nearly 100 percent of all artichokes in the U.S. are grown on the temperate California coast. Castroville, California is considered the epicenter of artichokes, dubbed the “Artichoke Center of the World” and even hosts a yearly festival dedicated to the tremendous thistle. As a bit of artichoke trivia, Marilyn Monroe (known as Norma Jean at the time) was crowned “Artichoke Queen” in 1948. 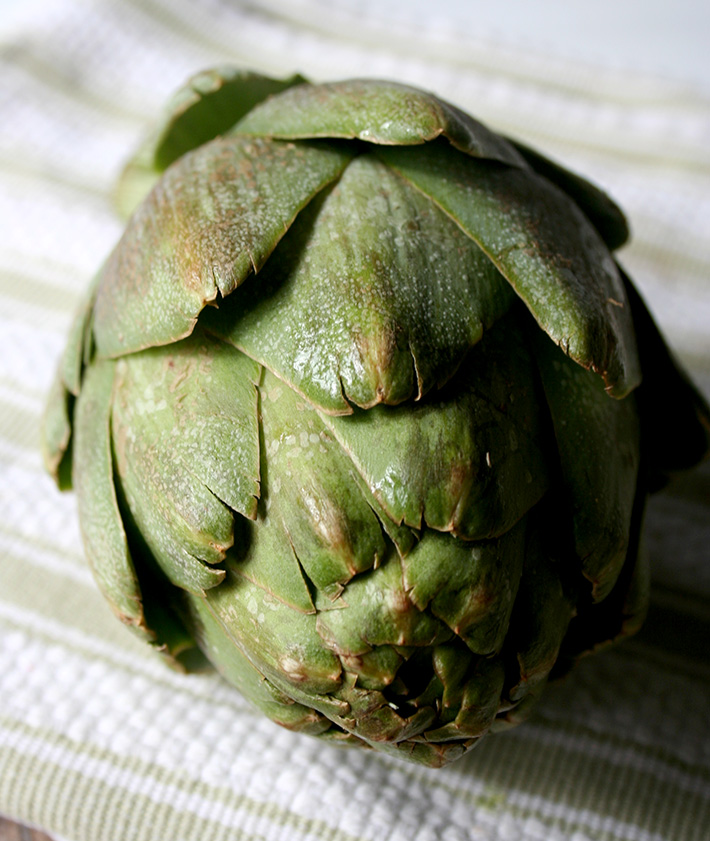 You’re often told to eat your vegetables, but in the case of artichokes, it’s really a good idea. Here are just a few of the health benefits of eating artichokes:

Antioxidants are credited with a number of different health benefits, including reduced risk of cancer, and protection against free radicals. One cup of artichoke hearts contains more antioxidants than a similar quantity of blueberries or cranberries, and nearly double the antioxidants contained in a glass of red wine.

With over 10 grams of fiber, an artichoke contains nearly half of the USDA-recommended fiber per day (21g for women and 25g for men). This makes it a healthy choice to improve digestion and overall health.

Artichokes contain a healthy dose of vitamins. Notably, vitamin K, which among other benefits is said to prevent dementia, potassium, which helps reduce high blood pressure, and manganese, which aids in bone production and helps maintain a healthy metabolism.

How to choose an artichoke 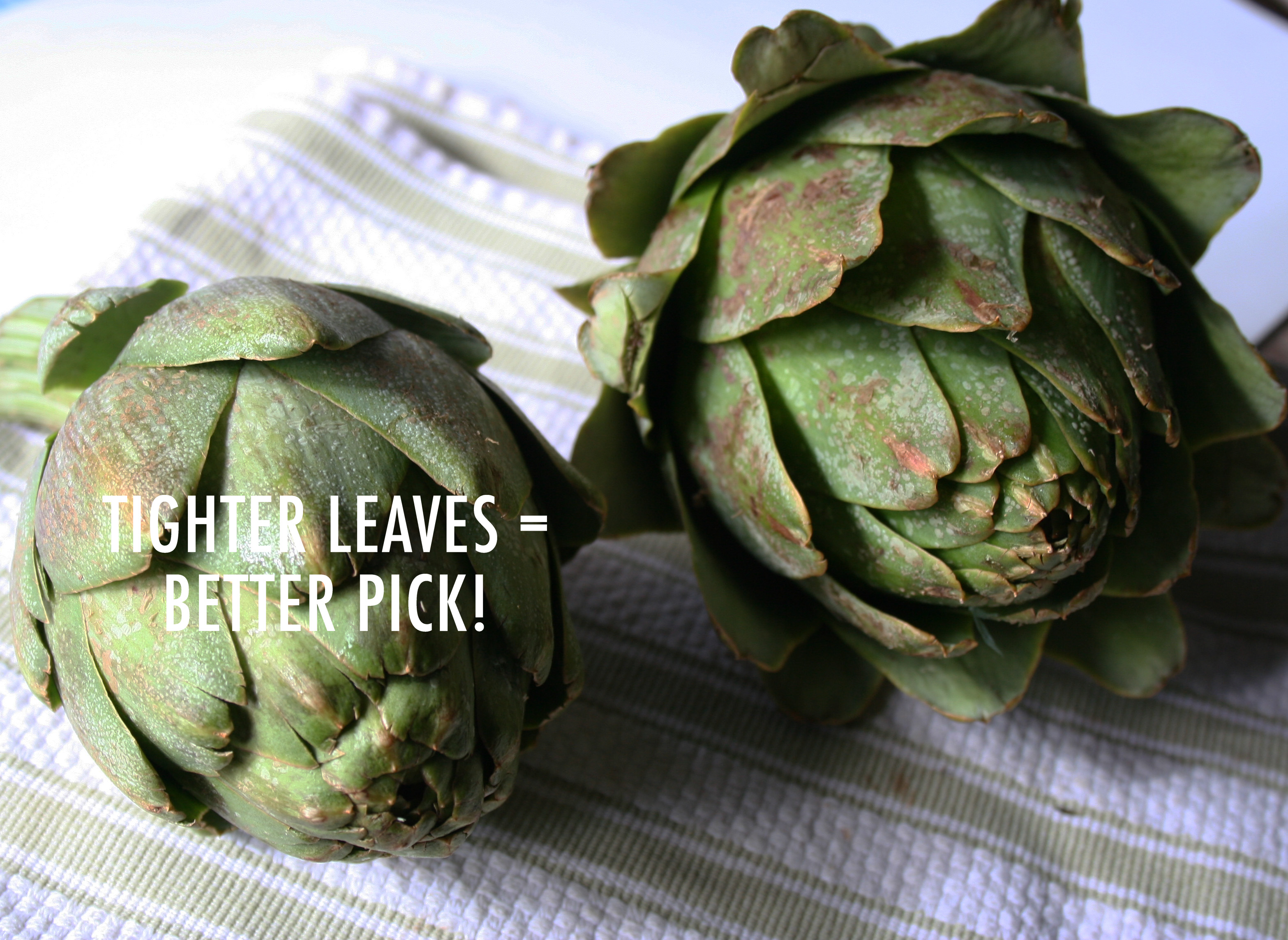 Interestingly, during the winter months (December through February), the presence of slight blotchiness or a slight white “blistering” on the edges is not necessarily a bad thing. According to Ocean Mist Farms, “the appearance of these Artichokes is the result of exposure to colder temperatures and frost,” and that true artichoke aficionados believe that these winter varieties have a more tender texture and deeper flavor.

So what parts of an artichoke are edible? 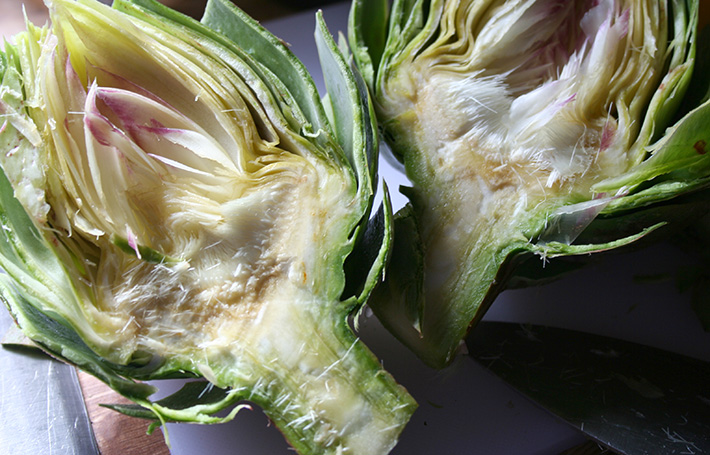 The heart is probably the most coveted portion of an artichoke; tender and flavorful, it can be braised, used as a pizza topping, or as a salad ingredient.

While the entire petals are not edible, there is a portion of the base of the petals that can be eaten; often, they will be served with a dipping sauce, so that the leaves can be dipped, and the eater can use their teeth to scrape off the soft, tender part of the inner leaf.

Another part of the artichoke that you can eat? The internal part of the stem closest to the heart. It’s actually an extension of the heart! It’s slightly more astringent than the heart itself, so it is not everyone’s taste, but some people love the flavor.

How to prep an artichoke for cooking

Before you get cooking, prep your artichokes by removing all of the pointy and hard bits you won’t need. Here’s how.

Slice off the top tip of the artichoke. Cut off the thorny tips on the leaves. This will prevent you from cutting yourself on the sharp edges while you cook, and will help make the finished artichokes easier to eat. 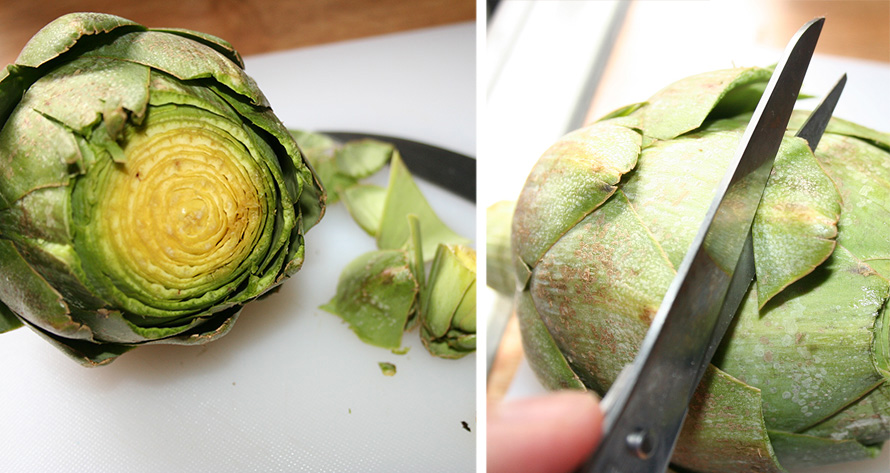 Wash the artichoke (it’s best to do this after you’ve sliced off the prickly bits), gently easing the petals, open a little bit to allow for more even cooking.

Slice the stem so that there is about 1 inch of stem remaining. You can peel the hard outer portion if you like, or simply cut it off after cooking. If there are any leaves that look slightly open toward the bottom of the choke or on the top of the stem, cut them off. 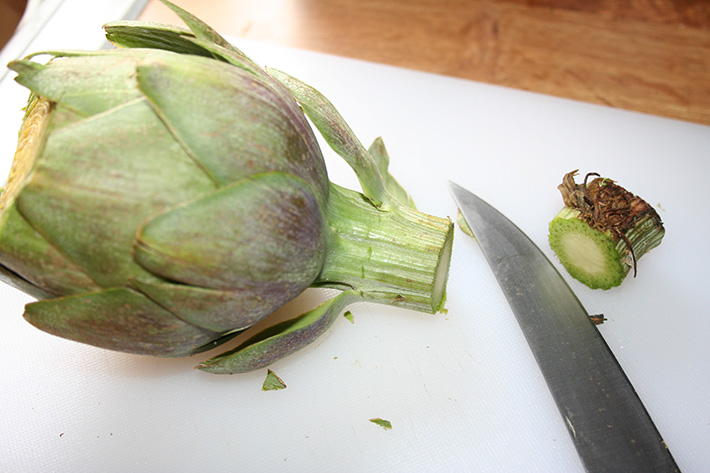 Rub all of the exposed cut portions of the artichoke with a slice of lemon. This will prevent them from browning (hey, we eat with our eyes first, so keep it looking pretty!). 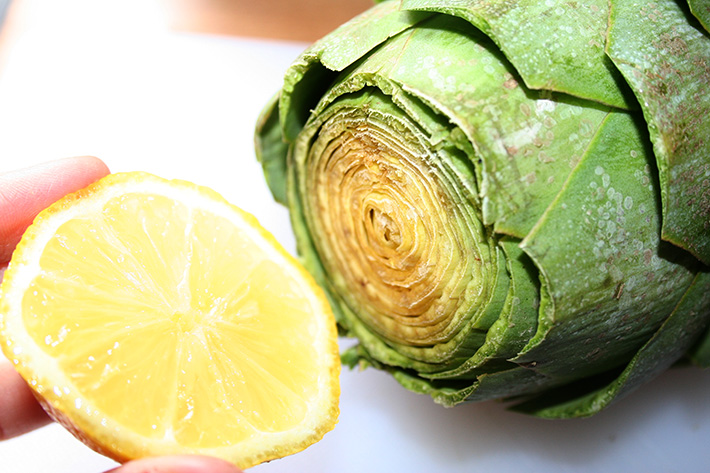 Now, your artichoke is ready to cook.

How to cook artichokes three ways

There’s more than one way to cook an artichoke. Here are three easy ways to prepare them. 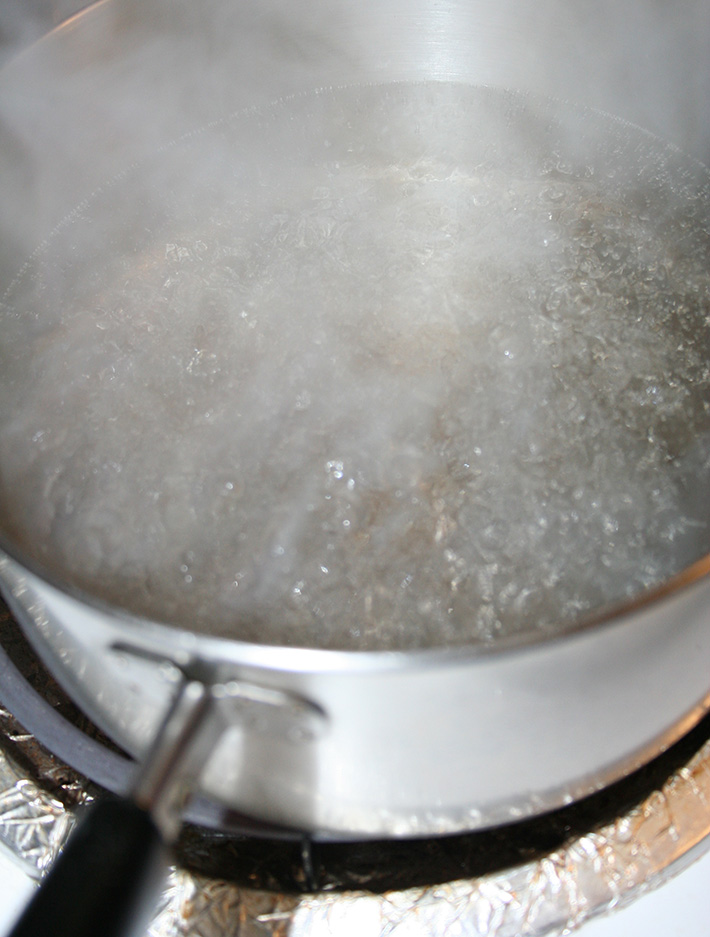 Place your prepared artichokes in the pot of boiling water (they will float) and reduce the heat to a simmer. Cover the pot, and let the artichokes cook until tender, somewhere between 25 and 40 minutes, depending on the size of the artichoke. To test doneness, try cutting the base of the artichoke with a sharp knife; if it glides through with ease, your artichoke is ready to eat. 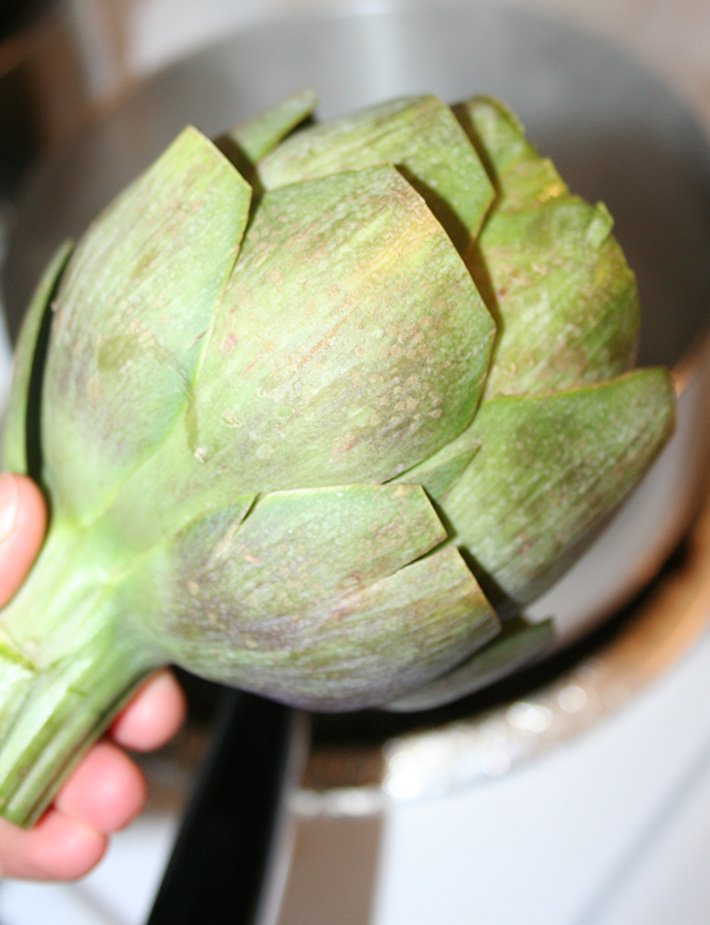 Prep your artichokes per the instructions above. Fit a large pot with a steaming basket, then fill it with water so that the water level reaches just below the basket.

Heat the water on high until it comes to a boil.

Reduce heat to a simmer, and place your prepped artichokes in the steaming basket, with the stems facing up — be careful, the steam rising will be hot! Cover the pot with a lid, and steam until the artichokes are tender, between 25 and 40 minutes depending on the size. To test doneness, try cutting the base of the artichoke with a sharp knife; if it glides through with ease, your artichoke is ready to eat.

Yup, you can cook artichokes in the microwave. Here’s how:

Prep your artichokes per the instructions above. Cut them in half, lengthwise. Rube the cut edges with lemon to discourage browning. 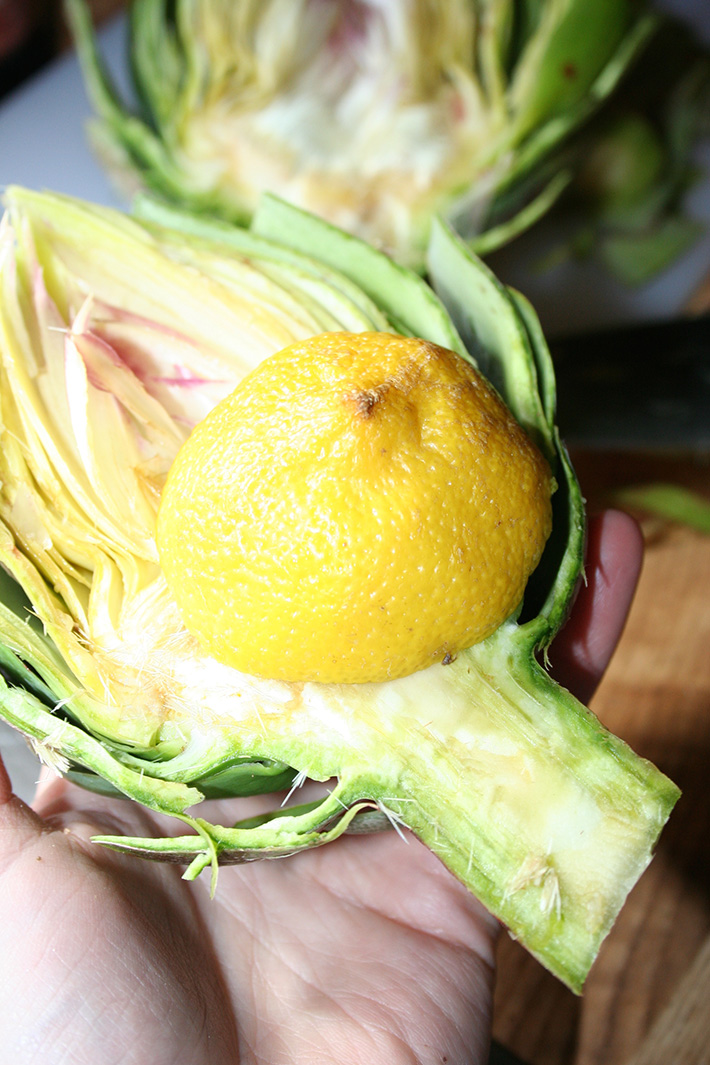 In a microwave-safe dish (a Pyrex-type bowl or small casserole dish with a lid works best), pour enough water to coat the bottom of the vessel, and a generous pour (2-3 tablespoons) of olive oil. Place the half or halves (I could only fit one half in the dish at a time), cut side down, on top of the wet mixture. Sprinkle the top of the artichokes with a little salt and a little more lemon juice if you’d like, and cover the vessel.

Cook until tender, 8-12 minutes on high. This can vary depending on your microwave; start checking at around the 8 minute mark. Cook until tender. To test doneness, try cutting the base of the artichoke with a sharp knife; if it glides through with ease, your artichoke is ready to eat. 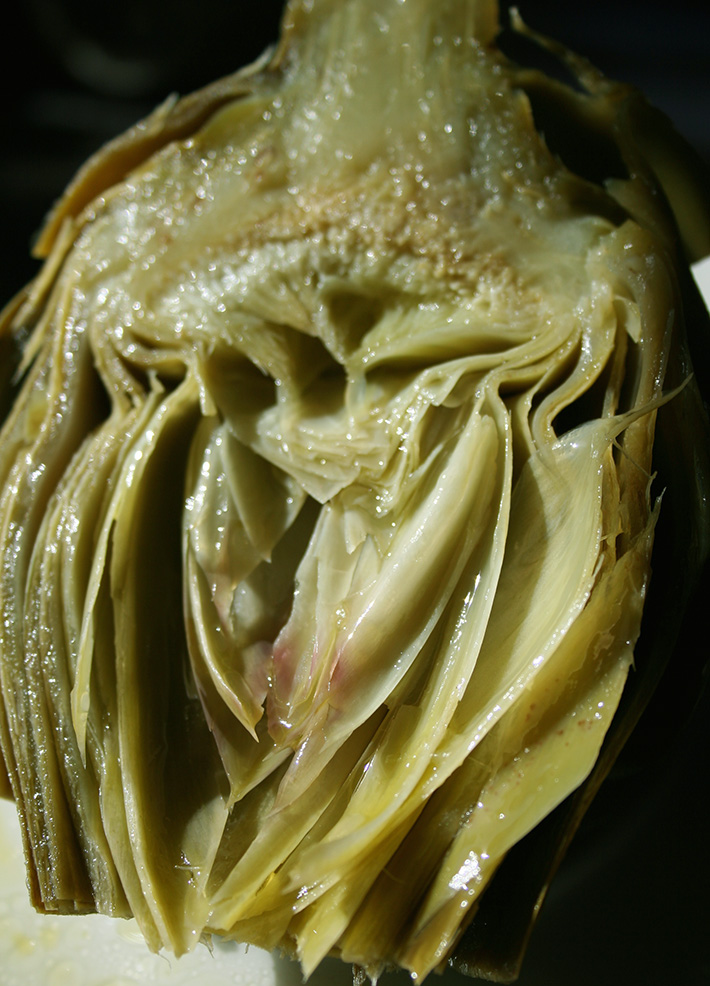 How to eat artichokes 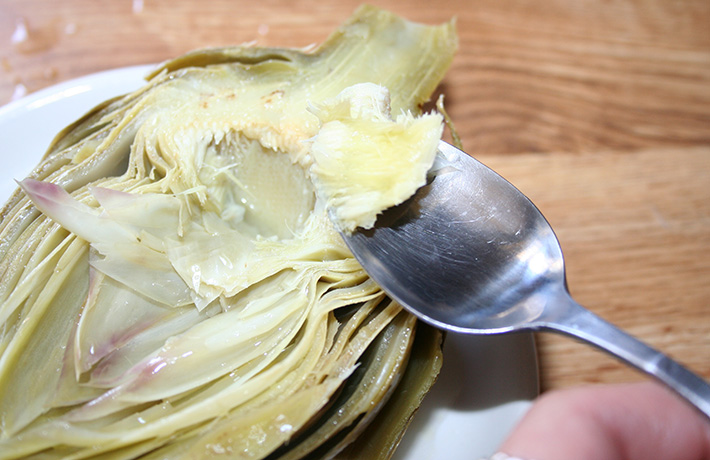 Once your artichokes are cooked, you’ll want to remove the fuzzy part from the center, right above the stem, with a spoon. This is referred to as the “choke,” and while it won’t literally choke you, it certainly won’t taste great. Removing the choke is easier to do once the artichoke is cooked. Once that is done, get cooking!

While your options are endless, here are three tasty ideas for using your cooked artichokes:

A classic way to enjoy cooked artichokes is to dip the petals in melted butter, and then to use your teeth to scrape off the sweet, soft inner side of the petal. Simple, but so delicious. 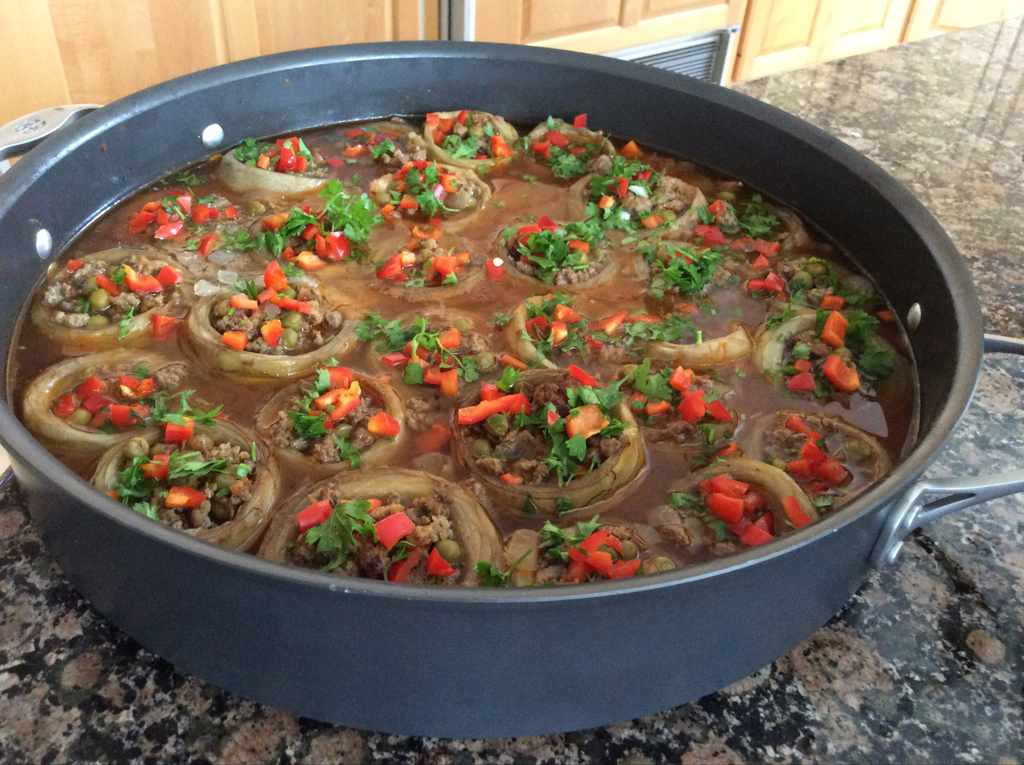 Artichoke hearts can be stuffed and braised for a cozy, comforting meal. The above recipe, featuring braised artichokes filled with ground beef, was inspired by the Craftsy class Secrets of Slow Cooking: Mastering the Braise. 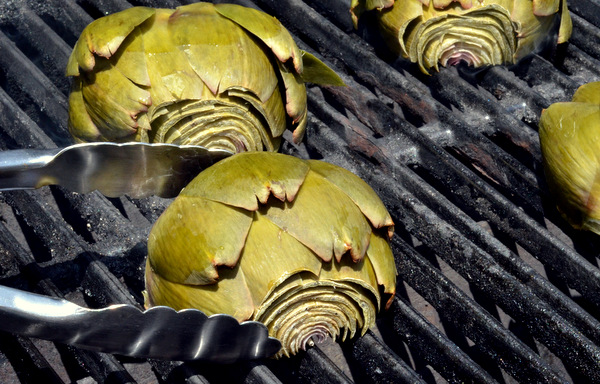 Go ahead, put your cooked artichokes on the grill! They attain a smoky, charred flavor that contrasts beautifully with the naturally buttery flavor of the vegetable.

What is your favorite way to enjoy artichokes?