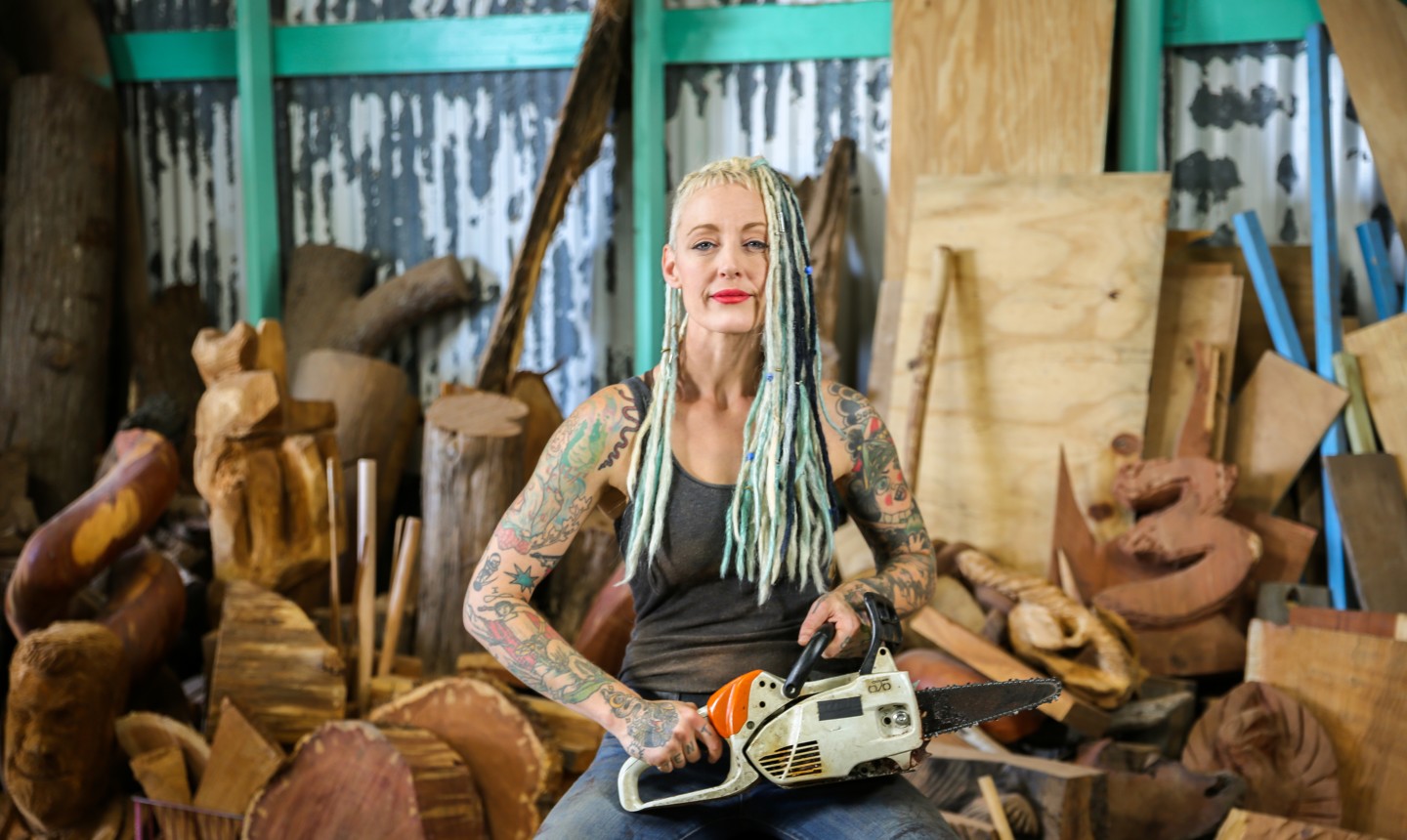 Her Instagram feed is a wall of wood, tattoos, carvings and the occasional bloody finger. Her Twitter bio reads: Chainsaw artist seeking a life of travel, freedom and inspiration. When she’s not working in the workshop, professional chainsaw artist Griffon Ramsey, a subject in our series Spark, is a big-time influencer who shakes up assumptions about women artists and the world of wood-carving. Her art is definitely not about happy wooden bears lingering at tourist traps — though she does have a magical story about a roadside attraction.

You studied set design in college, is that right?

Yeah, and I still really like to express myself that way. In Austin, there’s a lot of opportunity for cool projects.

So you’re thinking about doing big installations in the future?

Yeah, it’s cool to make a piece for somebody and have it fit into their home and feel that they love it. But I like the idea of making things for public spaces, where you can touch more people, you know?

Is salvage a typical way for you to source wood?

You know, I’ve been kind of lazy — I’ve been going to the saw mill a lot. But I’m trying to look at my business a bit more carefully this year, so I made a mental note to start looking for new wood sources.

Plus it’s great to give something a second life.

Oh, absolutely. Granted, a lot of the stuff I use — the cedar here — is considered invasive, so people are cutting it down anyway to help other plants. So I feel okay buying from the sawmill. With salvaging, the story sometimes is a crazy storm, or a crazy flood, or something like that, and I think it adds to the mysticism of whatever I make, you know?

Speaking of mysticism…on your site, you say that your work is partly inspired by magic. What do you mean?

It’s [a thing from] my youth; intuition; those feelings, those coincidences, those weird moments in life that things line up. Honestly, it’s how I got started carving. It feels like this strange meant-to-be thing.

I grew up in Oregon. The first time I became interested in chainsaw carving — I was seven or eight years old — was a family trip up the coast. We stopped at this roadside attraction called Sea Gulch. It was a chainsaw carving gallery, a saloon-town village thing. It had these paths up into the hills and there were all these things hidden and tucked away, weird little buildings and moving things, carvings on motors and chainsaw sculptures, Totem poles, a cigar store Indian. Just lots of stuff to look at. I was super-fascinated by that. Years later, I told my husband at the time that I was interested in learning chainsaw carving. It was something that I’d always wanted to try because of that experience.

And that’s when you got started?

So, [my husband] bought me this little chainsaw for a Mother’s Day present, but I was pregnant. I was too scared to use it, so it went into the basement. I forgot about it. Six years later, when I was quitting my job, I decided to get it out again. I’d started a YouTube channel and every time I did a video I’d do something different, and I thought the chainsaw would be a great dramatic entrance. So, I’m working on this idea and he was like, oh, I know this guy who does chainsaw carving. We went to check it out, and R.L. Blair had moved in at that point. He showed me how to set up my saw and I learned more about his history. Come to find out that he was the guy who carved at that roadside attraction.

So there’s this moment in time that inspired me originally, and then randomly when I decided to learn, twenty-something years later, Blair happened to be 30 minutes away from me. So, I don’t know. I don’t know what I believe in. I follow those feelings. It seems to be working for me, and magic is an easy way to describe it.

And now you do this full-time and you’re competing in chainsaw art competitions!

Yes, I have a competition coming up next week in Japan. And I have an event in November in Slovakia, working on an ice church. It takes three to four weeks to build this big church out of ice and they have weddings and events in it. And I guess it’s super-duper below freezing. I’ll be the only woman in a group of 20 guys and most of them are Slovakian, Russian, Eastern European guys. And me.

This interview has been edited and condensed for clarity.

One Response to “Meet Griffon Ramsey, Chainsaw Artist and Believer in Magic”