First off, I am a 100% digital shooter and have been since college when I traded in my old Vivitar 35mm for a Canon Rebel XT. More and more, I see boutique wedding photography studios offering film — especially medium format — as a coverage option for clients who want something a little bit different. I love the look of film and for my own wedding hired a photographer who shoots both.

Check out some of the advantages and disadvantages to film and digital: 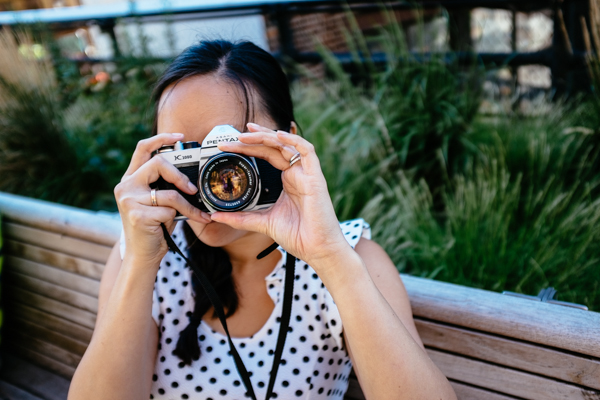 Film just has “that look.” It’s softer, it’s dreamier, and the color palette is a little more defined. Medium format is even more so, because of the shallower depth of field that is possible. With film, you never have to sit in front of a computer and can just send your exposed film off to the lab. No editing or retouching is necessary.

Since most photographers are shooting digital, being a film shooter gives you something unique to offer people. Most film shooters bring only a certain amount of film with them to a wedding so they are more likely to carefully compose each frame, so they aren’t wasting film or running out before the end of the day. For photographers that are interested in shooting medium format, film is a way less expensive way to get that look over digital. A similar digital system can cost ten times more.

Digital photography has a lot of advantages. That is why it is most popular, in my opinion. First, it is relatively cheap. Once you have your equipment, you can shoot all day as long as you have memory cards and batteries. Being cheap means that you aren’t afraid to take a lot of images. So, you have more images to work with and your clients end up with more images. Everyone is happy.

Second, it is fast. You can shoot images and upload them to a website instantly or make prints instantly. With the LCD screen on the back you have instant feedback and know whether you got the shot you wanted or didn’t. Shooting in RAW means that you can fix some mistakes that you may make in camera. You can adjust the exposure and tones after the fact. Digital is generally sharper than film and allow you to get a very crisp final product. Digital cameras have continually increased their low light capabilities and now far exceed film in that category. Lastly, software developers and preset designers are getting increasingly close to replicating the film look using digital files.

If digital is fast and cheap, that makes film slow and expensive. With film you have to wait to see how the images turned out until after they are developed and printed. If you send your film out to a lab this can take weeks. Also, you need to buy a steady supply of film to continue shooting. Depending on what you use and how many rolls you go through in a wedding, this can be very costly. To keep costs under control, film shooters must keep track of how many frames they take and limit themselves to a certain number, to avoid running out or breaking the bank. Film is also not ideal for low light situations, so it’s not very useful for dark receptions or night shooting without a tripod.

The one thing that bothers me most about digital is the time spent sitting at the computer. Yes, you can outsource this much like film shooters can to a lab. But I feel the need to do editing myself, to put my personal touch on it. This is a lot of time staring at a backlit screen and not something I want to be doing most of the time. Digital shooters also have higher start up costs, which, along with buying a camera and lenses, includes buying a computer and software. Since everyone is used to instant gratification, digital clients have very high expectations for a quick turnaround, which film shooters don’t experience.

Whether you are considering becoming a digital or film wedding photographer or considering hiring one, I think these are important things to keep in mind. It all comes down to preference.

Are you shooting your brides in the best light? Get lighting, posing & composition skills that will have your clients saying “I do” to your photography in Craftsy’s Beautiful Bridal Portraits class!

What is your preference? Film or digital?