Do you have a bunch of yarn left over from another project? Maybe you’re stuck with a bunch of small bits left over and you can’t think what to do with them. Try domino knitting! 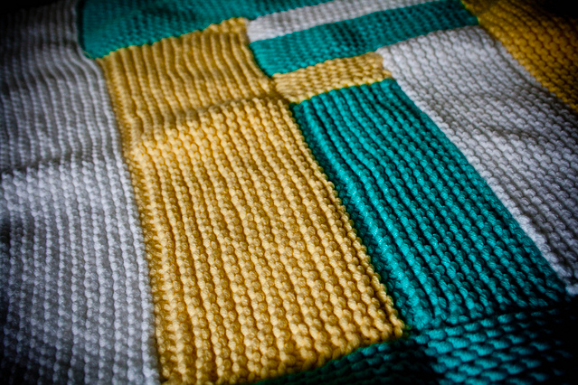 When domino knitting, you start with one block, whether it be a square, rectangle, or diamond shape. Then the next block, knitted with a different color, is begun by picking up one edge of that first block. If you want the second block to be a different size, you would either cast on additional stitches as you knit the first row in the new color or you might only pick up half the block. Each new block picks up from a previous one, leaving you with a look much like a block quilt but without sewing together any of the pieces.

Eventually, you will have to join a new block to more than one existing block. To do that, I like to pick up the longer edge, say it’s the horizontal edge. Then when I get to the corner where there’s a vertical edge from an existing block, I would knit the edge stitches from that block together with the first stitch of my new block to join the blocks without needing a seam.

Domino knitting can be free form, where you just knit where the mood (and your yarn stash) takes you. Or it can be very patterned and specific with blocks of all the same size and creating an overall pattern.

Domino knitting isn’t just an opportunity to use up your stash yarn or play with color. It’s also an opportunity to play with textures. I once found a pattern for a six-sided baby block where each of the six sides was a different stitch: garter, a rib, a basket weave, etc. One of these days, I want to take the idea for those blocks and create a domino baby blanket made of uniform-size blocks with each block having a different pattern.

Even if you’re trying to do a free form domino knitting project, it’s always a good idea to have in mind what size and shape project you’re aiming for. At some point, if you’re making a scarf or a blanket, you’re going to want to end up with square edges and opposite sides that are the same size. Luckily, graph paper can help. Maybe you want to free-form for a little bit and then plot out the rest of your course on graph paper as you get closer to the end. Or you can plot out your blocks before you start.

Join us here at the Craftsy blog tomorrow for a great roundup of free knitting patterns to celebrate Free Pattern Friday!