Do you know how to make chicken pot pie crust? Spoiler: that’s a trick question. 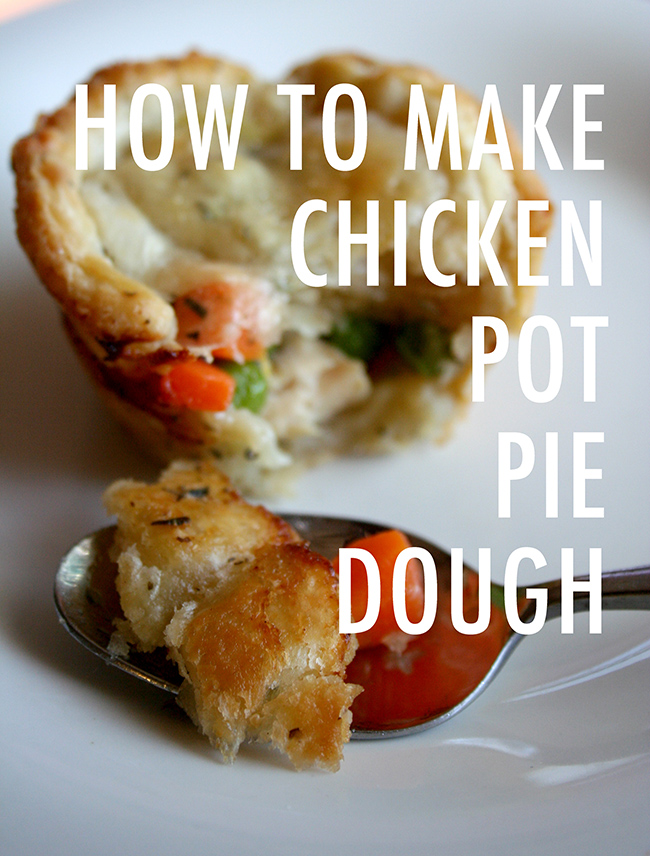 The fact is, there isn’t just one way to make chicken pot pie crust.

There are endless variations, and seemingly everyone insists theirs is the absolute best.

Some people use a basic all-butter pie dough. Others insist it has to be half butter, half shortening to be flaky yet sturdy. Others still suggest employing lard.

Oh, and there are the “secrets.” Some bakers say that the secret to a perfect crust is blind baking the bottom. Others say the secret is adding an egg to the dough. Others still insist that it’s a splash of vinegar added to the dough that gives it the perfect flakiness. 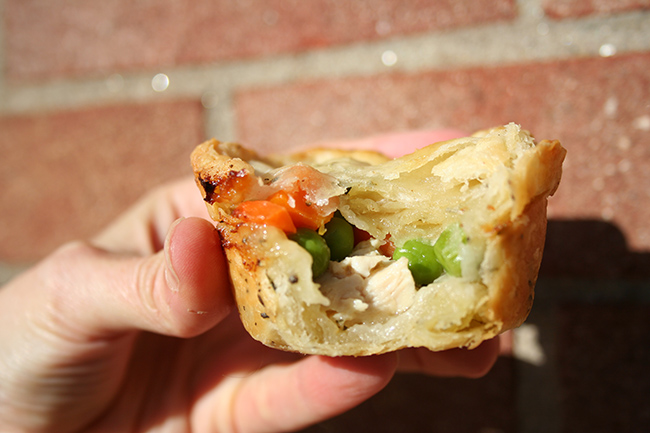 So, who should you believe? I tried several of the different variations listed above, and found what I believe is a fine basic specimen: an all-butter crust featuring two infusions of butter, with a splash of vinegar added to the dough.

The butter imparts a full-bodied flavor, and the vinegar does indeed add a little zing to the flavor and a little extra flake to the crust.

All of the Comfort. Less of the Guilt

Enjoy your favorite comfort foods, made healthier and more delicious, with recipes and tutorials in these 6 online video lessons. Enroll Today!

Consider this recipe your template: You can either choose to follow this recipe to the letter, or try one of the variations listed below so you can tailor the recipe to make it your absolute best chicken pot pie. 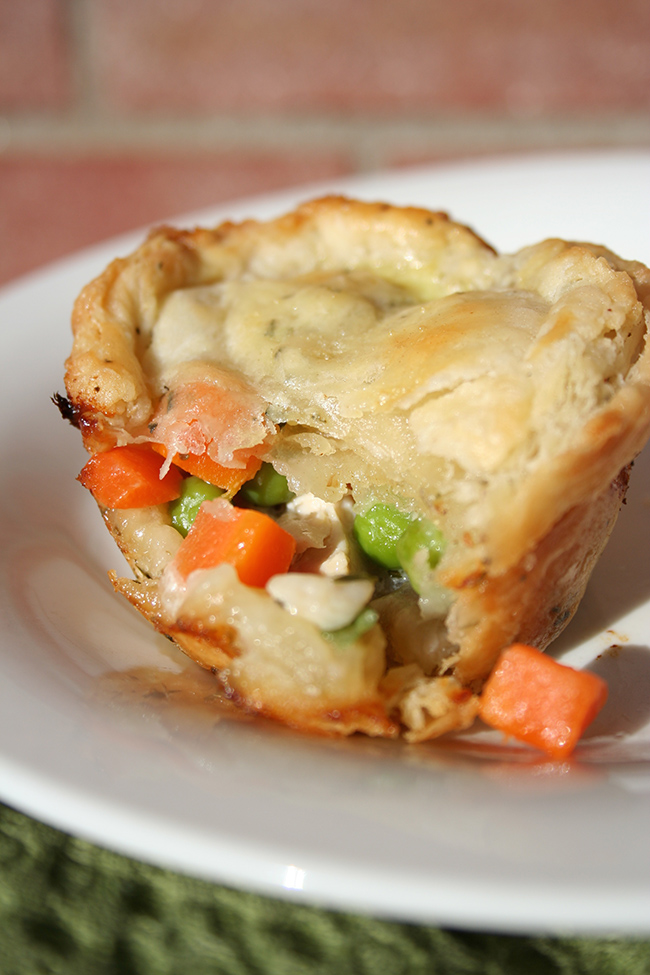 Makes enough for one 9″ double-crusted pie, or 12 cupcake-sized pies

In a large bowl, combine the flour and salt; give a quick whisk to combine. 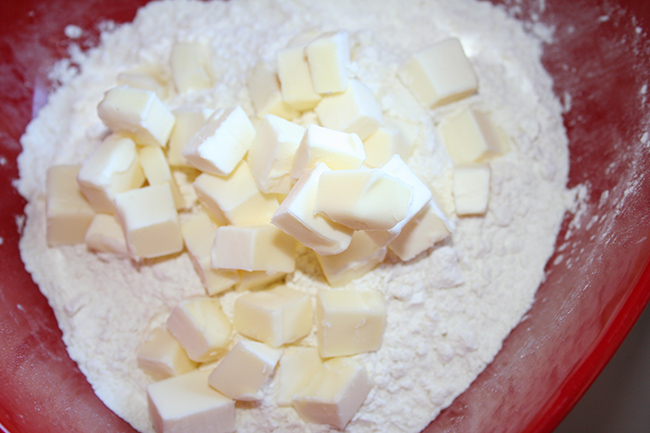 Add the rest of the butter to the mixture. Mix with a wooden spoon to give each piece of butter a coating of flour, then switch to your hands to squeeze or flatten each butter cube. This makes for nice pockets and flakes in the finished crust. 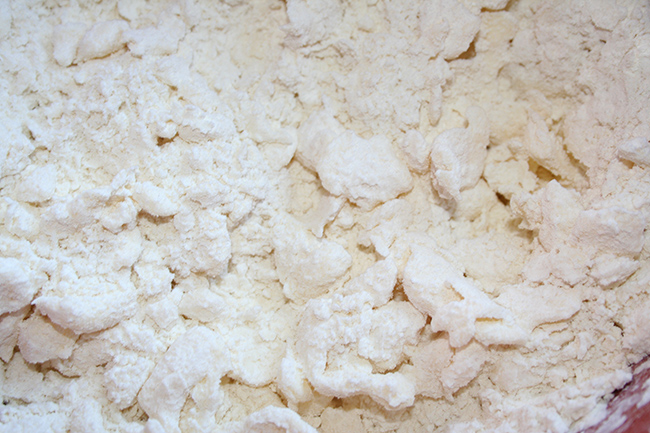 Add 2 teaspoons of vinegar and begin to incorporate the ice water, 1 tablespoon at a time, stirring gently after each addition. Once the mixture clumps together into a ball with minimal dough flaking off, you’ve added enough water. 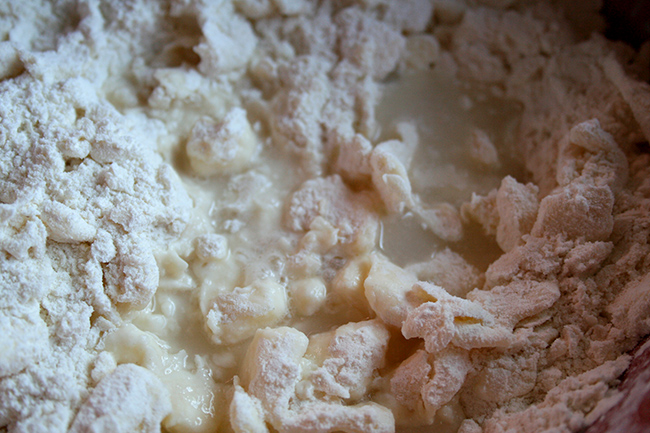 Divide the dough in half, and form each portion into a disc. Wrap tightly in plastic, and put the dough in the refrigerator for several hours, or overnight.

When ready to bake, roll out the pastry as you would the dough for a double crust pie (in these photos, the crusts were cut into smaller portions for mini pies).

Fill with your favorite chicken pot pie filling, top with the second portion of crust, and brush all over the top with an egg wash. 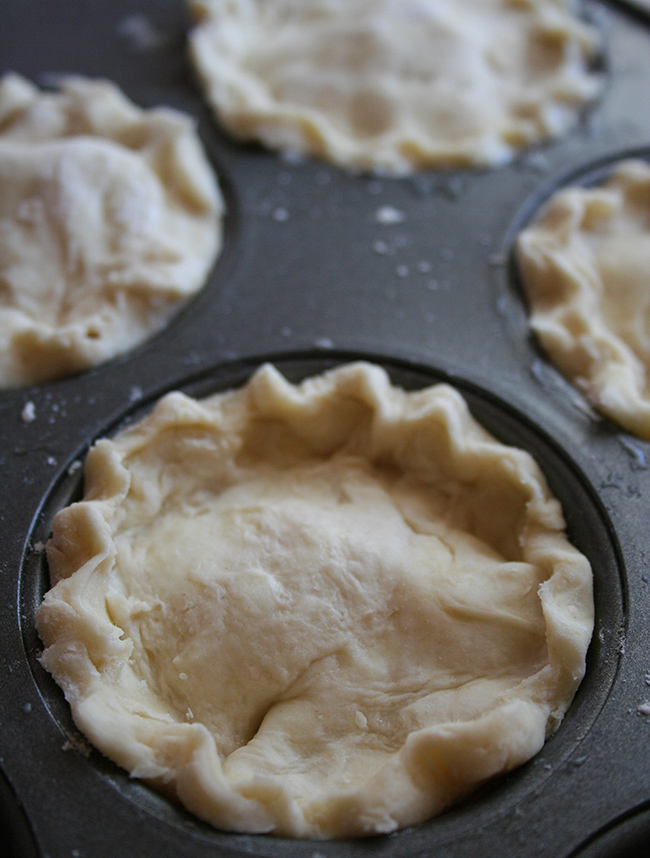 Bake at 400 F until browned to your liking: 10-15 minutes for mini pies, 35 minutes or until golden brown for a full-sized pie. Tent the top crust with foil if it seems to be browning too rapidly. 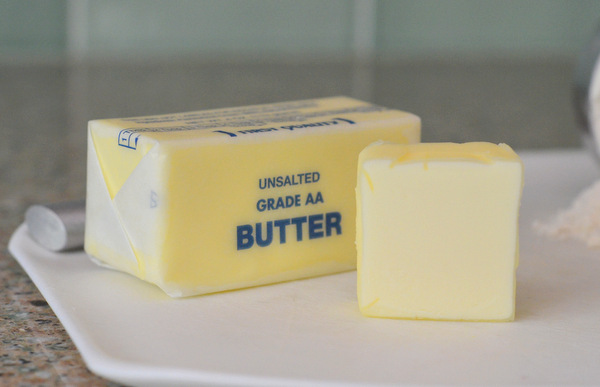 This recipe employs all butter, but some say that half shortening makes for a sturdier crust. If you’re worried about Soggy Bottom Syndrome, replace some or all of the butter called for in the recipe with vegetable shortening. You can also substitute lard, although I personally have not tried this variation.

Oh, and an added note on butter: use the good stuff here. Since this crust has so few ingredients, each one really shines. If you use a nice, fancy butter, your finished pot pie or pies will taste fancier in kind.

Does blind baking the bottom crust help avoid the aforementioned Soggy Bottom Syndrome? Not in a huge way. Personally, I found the risk of dough shrinkage and the annoyance of the added step wasn’t worth it.

Some advocate the addition of an acidic ingredient such as vinegar to give your crust the perfect flaky texture. Personally, I found that a few teaspoons of vinegar added to the dough at the same time as the ice water really did impart a pleasant texture to the crust, so it is suggested in this recipe.

Some bakers like to add cold milk to the dough, instead of ice water. If you prefer a darker crust, consider this option.

If you’re so inclined, it is suggested that you employ an egg wash on top of your pot pie or pies before baking. It will make them more visually appealing, and it adds a pleasant crunch to the top crust. 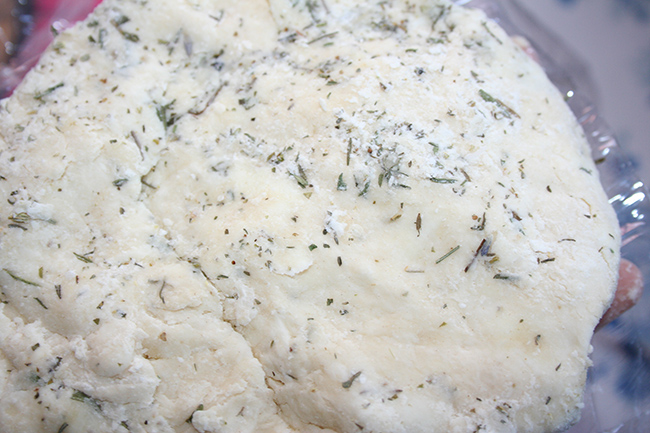 If you want to jazz up your chicken pot pie crust, add some flavoring! At the same time that you incorporate the water into the dough, add herbs, spices or even grated cheese to make a uniquely delicious finished product. I tried a variation featuring herbes de provence and it was amazing!

All of the Comfort. Less of the Guilt

Enjoy your favorite comfort foods, made healthier and more delicious, with recipes and tutorials in these 6 online video lessons. Enroll Today!
Discussion