It takes an impending houseguest to get me to move quilts from their long-term parking spot, AKA my deep sofa. When the noted quilt researcher Laurel Horton visited last week, a quilt came up for air and we examined it.

Spoiler alert: There’s a seam ripper in its future. 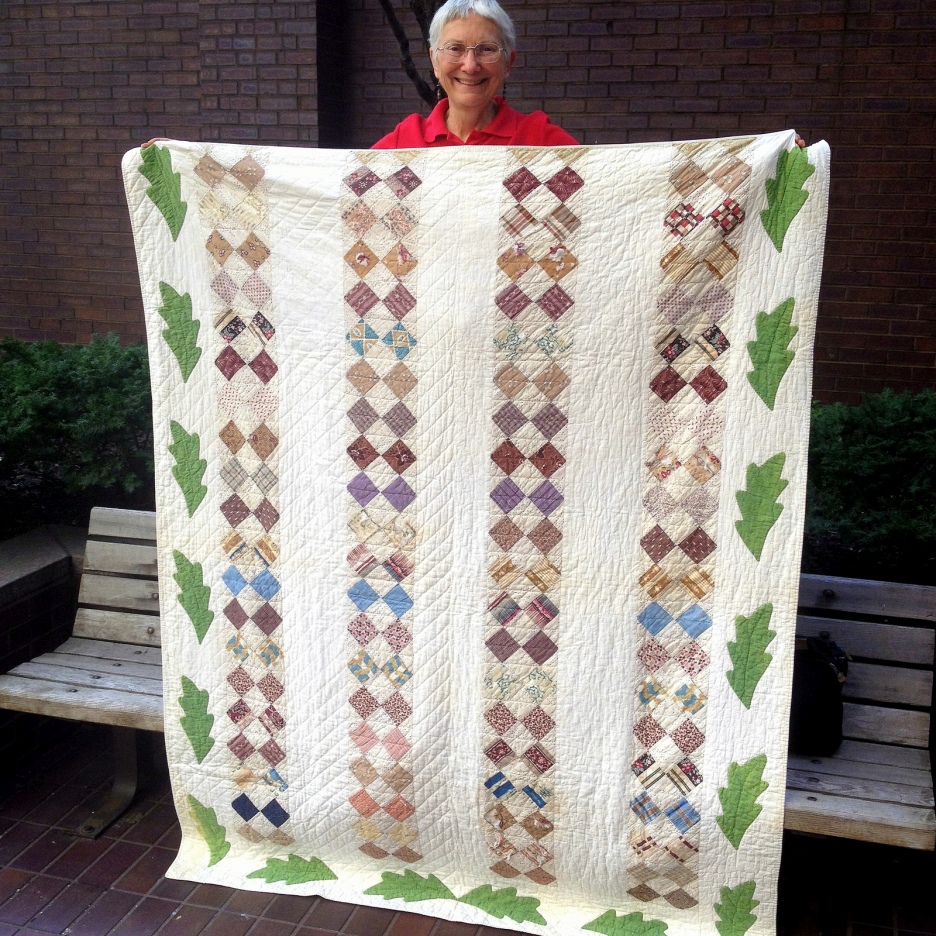 Quilts in my collection are characteristically eccentric in their construction.

At first sight I am attracted by particular types of blocks and fabric in a quilt. I often see something others don’t during their first impression. It’s a glimmer but to me it’s as if I’ve seen a glint of gold. The “Anita Meter” goes through the roof.

Once upon a time “Suzy” presented me with a Strippy Four-patch quilt that belonged to her mother. It’s likely that she purchased it from a Long Island, NY, antique shop for decor. It’s worn and bleached out from harsh laundering but it’s still readable. It’s exactly the sort of quilt to stop me in my tracks. 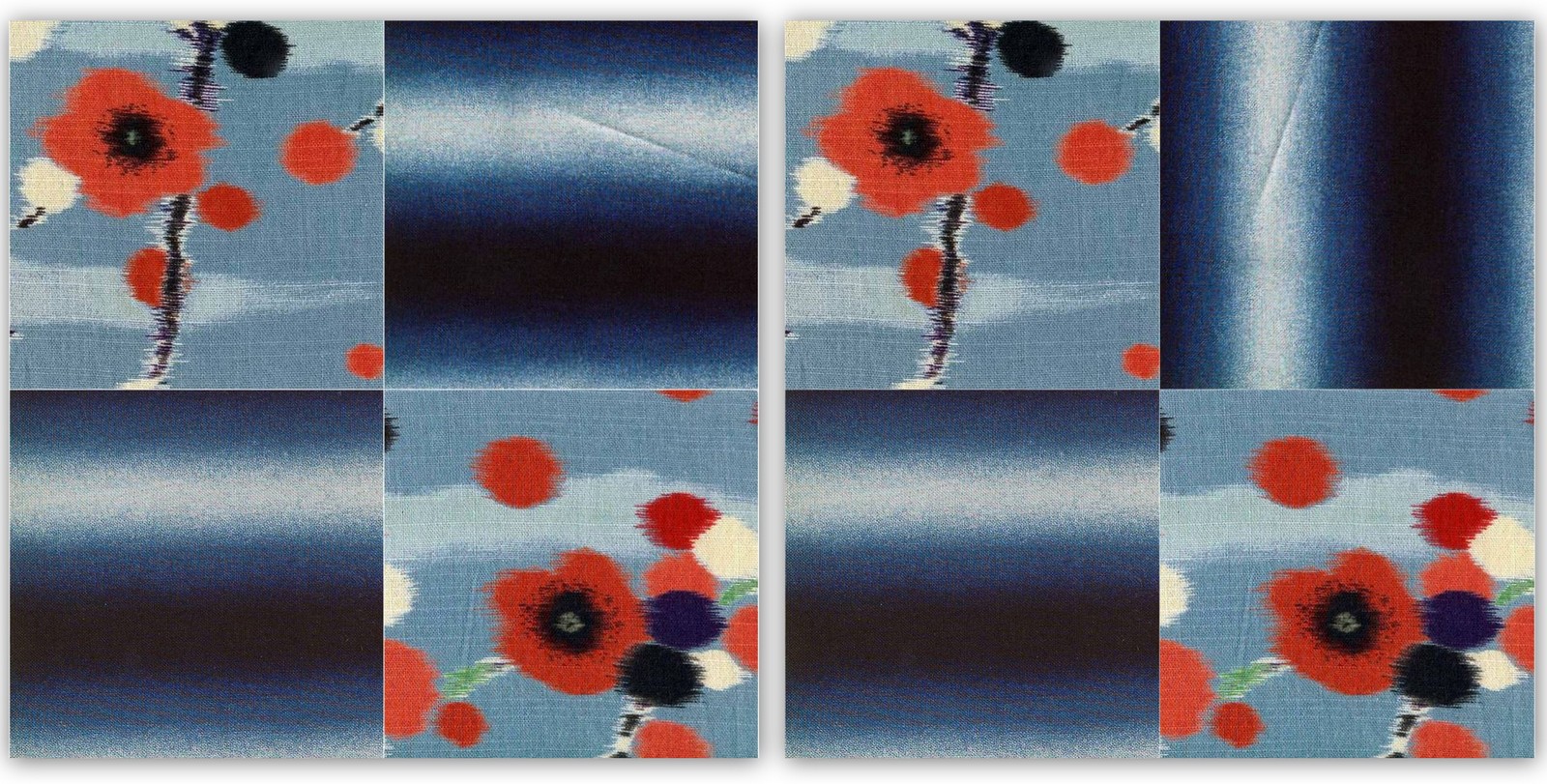 I digress but, do you see a difference between the above two blocks? Each uses the same four fabric squares in the same positions but the orientation of the blue stripe squares in the upper right quadrants differ.

Last month my Bow Twist pattern was released. I think it’s sensational from an engineering standpoint. My nephew would appreciate it. It’s well-proportioned and eccentric in construction. It resulted from my happenstance sighting of the Bow Tie blocks on my design wall. I had walked past these with my head cocked and noticed a squarish shape contained on-point. Immediately I grabbed orange low tack tape to demarcate what evolved into the Bow Twist block.

With time, I devised a radical method to construct this new block. It can’t be discerned by looking at it and it has to do with the triangles. If you’ve read my recent columns you know 2015 has become my year of triangles.

Speaking of the use of fabric, I deliberately set a pair of pickle-colored stripe squares, near the scissors, perpendicular to each other. I have always been crazy for perpendicularly-set directional fabrics whether in a quilt, upholstery, or garment.

Do you see what I see? It appears that every directional fabric square is set perpendicularly with many instances of same fabrics spanning horizontally across the quilt. See the three pairs of woven blue chambray? The bottom horizontal column of brownish vermiculate? The top horizontal column of stripe squares? These are not happy accidents but deliberate sets. 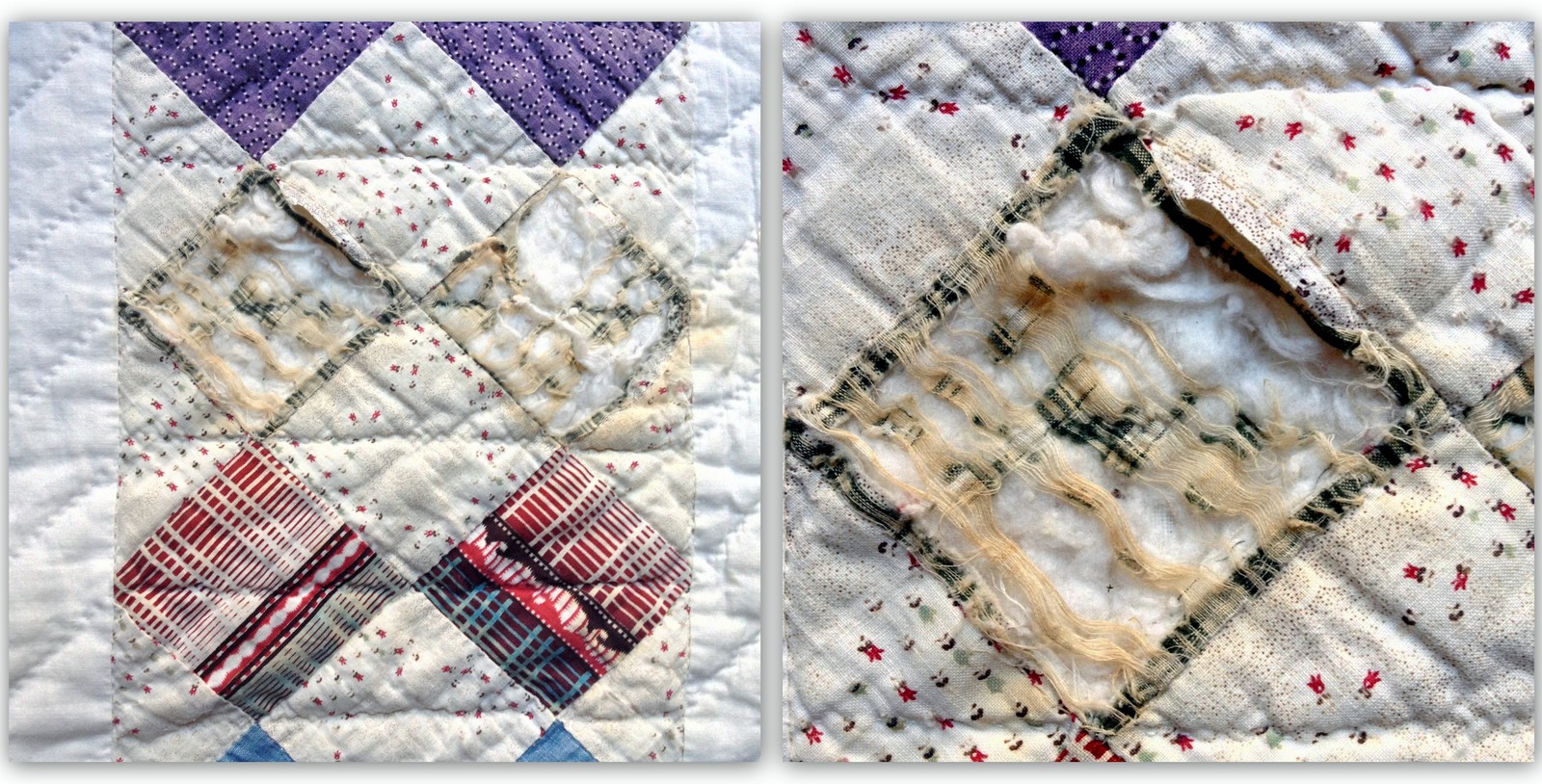 The red/blue roller-printed stripe initially grabbed my attention. Hands down, killer fabric. It’s a shame the woven blue squares have shredded. About all that remains are, I believe, warp threads. Look to the upper right for the precise hand-stitches which once joined the woven square to the selvedge of the background triangle.

Laurel and the seam ripper proved my hypothesis. Yes, the vertical columns of pieced blocks are Four-patch blocks set on point. But they alternate with Four-patch blocks cut diagonally in half. What an unusual method of construction. This is one rare and deliberate quilt.

The cross-stitch initials “AMG” appear on the back of the quilt. This maker and I are kindred spirits.