Nothing brings a smile to my face like a yarn bombing. Whether it’s a huge installation on a bridge or just a small one like a doorknob cozy, seeing everyday objects covered in yarn brightens my day instantly.

Fiber artists like Olek and Magda Sayeg are practically yarn craft-household names in the world of yarn bombing, organizing some of the most famous fiber installations we know. Now, yarn bombings are now becoming so large in size that it often takes the cooperation of fiber artists and large organizations to stage the entire installation.

While it’s difficult to pick favorites — aren’t all yarn bombings beautiful and wonderful? Here are a few recent ones that caught my eye. 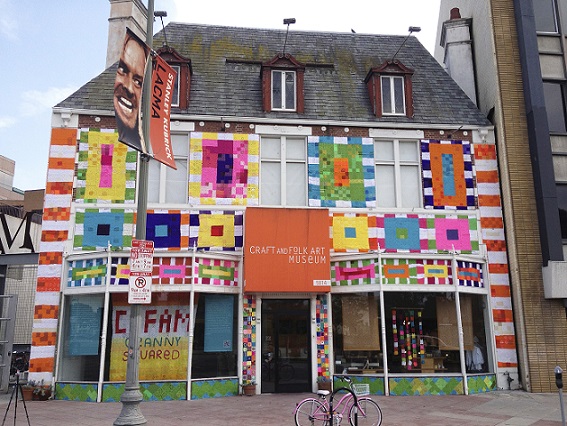 From far away, you’d never know that all these colorful squares are actually crocheted granny squares. These squares are the work of Yarnbombing Los Angeles, a group of knitters who have been staging public installations since 2010.

More than 500 crafters from around the world contributed to this specific project. After the installation is taken down on September 14, 2013, the squares will be sewn into blankets and distributed to Skid Row residents. You can see even more photos of this amazing installation here. 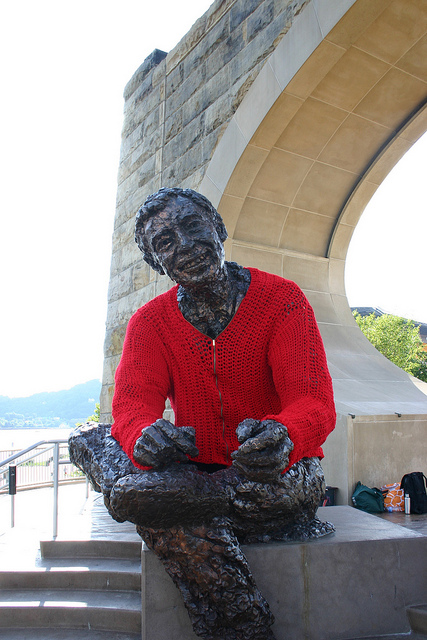 Yarn bombing statues is not uncommon, as we’ve seen from yarn bombings like the Rocky statue in Philly. But if any statue deserves to be covered in yarn, it’s Fred Rogers of the children’s TV show Mister Rogers’ Neighborhood.

The red sweater, symbolic of the sweaters Mr. Rogers often wore on his show, was crocheted by Pittsburgh native Alicia Kachmar. As you’d probably guess, Alicia used a giant Q-size crochet hook to make a sweater large enough for this 10-foot-tall statue! Check out more photos on Alicia’s Flickr. 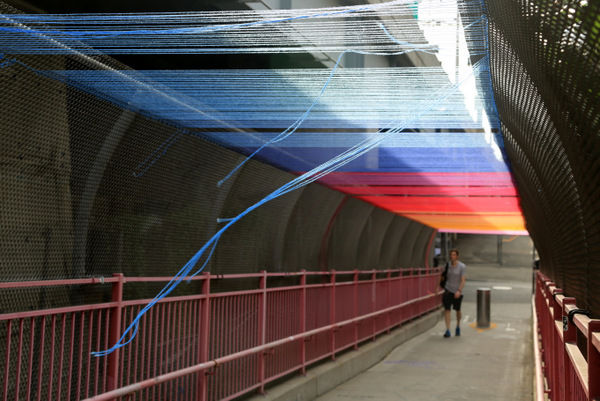 This yarn bombing is proof that installations don’t have to be overly complicated to be beautiful. Minneapolis artist HOTTEA strung yarn over the pedestrian walkway of the Williamsburg Bridge that connects Brooklyn to Manhattan, creating a rainbow effect for hundreds and bikers and pedestrians to enjoy. See more photos at here. 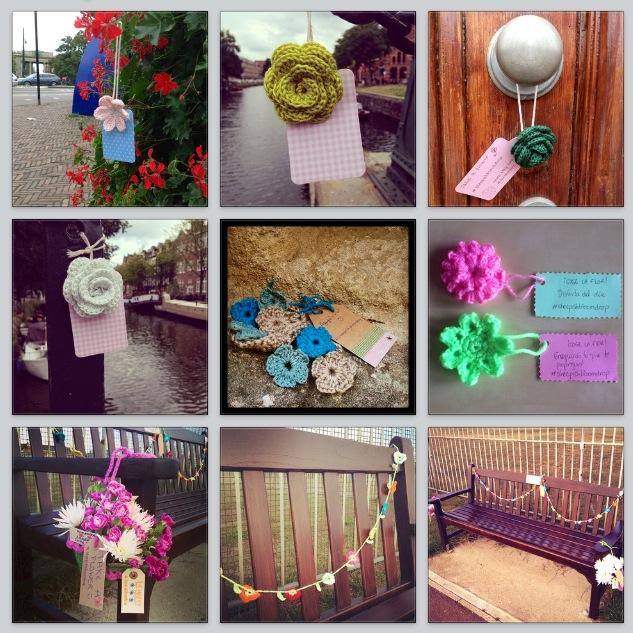 It takes a lot of crafter power to organize yarn bombings. In the case of Meredith Crawford of One Sheepish Girl, it only took a blog post and some really awesome knitters and crocheters. Meredith’s Sheepish Bloom Drop invited her readers to craft a flower, attach a kind note, and leave it anywhere they’d like. Readers photographed their yarn bomb, tagged it on social media, and created a worldwide yarn flower bomb. 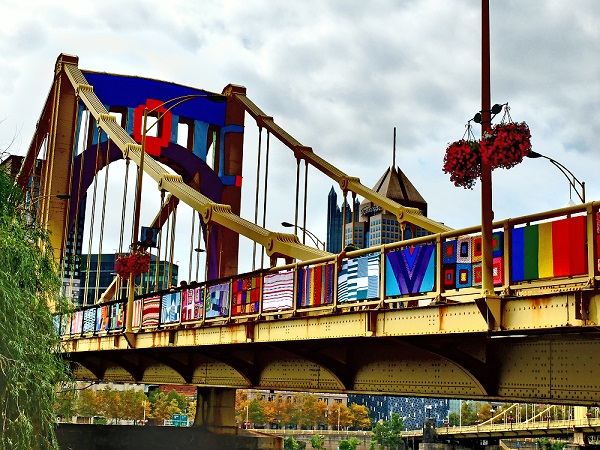 Photo by Knit the Bridge

This installation, organized by Knit the Bridge, uses more than 600 knitted and crocheted blankets and over 1800 (whoa!) knitters’ and crocheters’ work. The bridge is located near Pittsburgh’s famous Andy Warhol Museum.

Blankets were attached to the steel bridge using plastic ties. The yarn bombing was removed on September 6th, with plans for blankets to be washed and donated to local homeless shelters and nursing homes.

Are you interested in yarn bombing? Here are a few things to consider before you get started. You can also start small with Bluprint member The Crochet Crowd’s tips for yarn bombing a bike.

What’s the coolest yarn bombing you’ve ever seen? Have you ever participated in a yarn bombing?