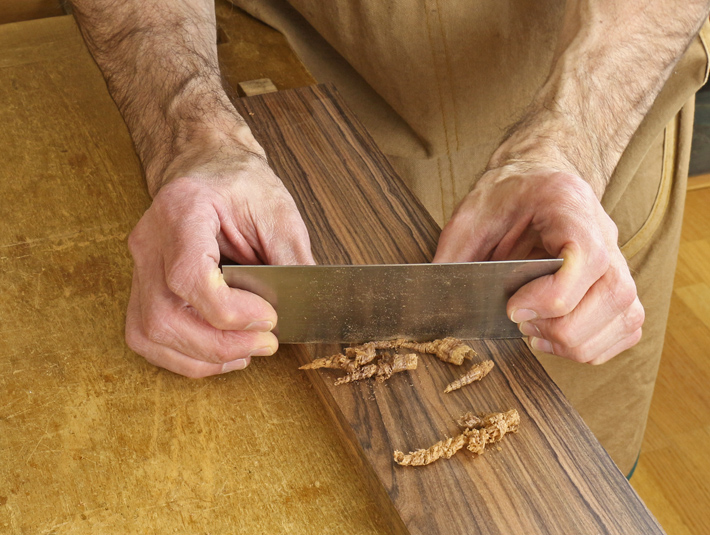 Deceptively simple but wonderfully effective, they are work faster and more economically than sandpaper, and can in even outperform hand planes is some situations. 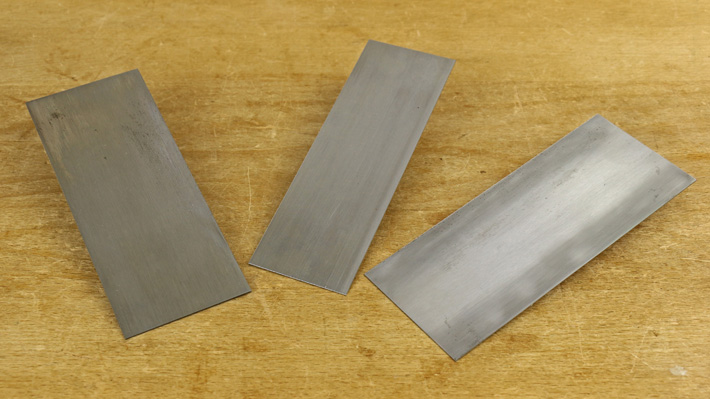 Simple, but there’s a hook

A wood scraper is basically just a rectangular piece of saw-grade steel, moderately hard at Rc48-52. The secret, however, is the hook. Too subtle to photograph well, the hook is created by slightly burnishing over the corner of each long edge of the scraper. Below is a diagrammatic cross section, not to scale (I think I need a Bluprint drawing class). 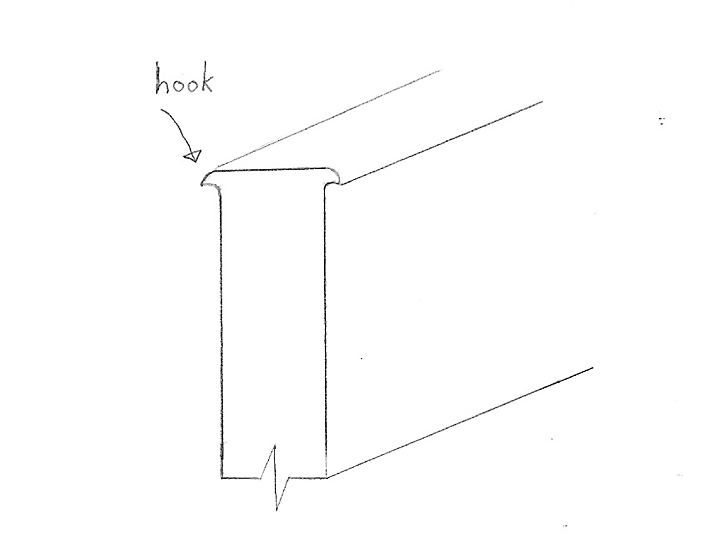 The hook functions as a tiny cutting edge. This means that the hook actually cuts and creates shavings, not dust, as demonstrated in the photos. The shavings come away from the wood in tight curls.

The hook has two key properties. It meets the wood at a very low angle and, unlike any regular blade, it is extremely short. This allows it to cut without digging too deeply into the wood or splitting the wood fibers ahead of the cut, which would produce tearout. In this regard, scrapers have an automatic advantage over hand planes, which can sometimes produce tearout in figured woods or other inconsistent grain patterns. It should be noted, however, that scraping is a method for finish surfacing. It does not have the dimensioning capability of hand planing.

Build sleds, fences, jigs and cauls that no shop should be without.Enroll Now »

The photo below shows wildly figured bubinga being scraped. There is not a bit of tearout. This makes scraping a marvelous way to finish beautiful but cantankerous grain patterns. The photo at the top shows very dense Honduras rosewood being easily scraped smooth. On medium to very hard woods, a well-sharpened scraper can produce a surface that requires only a little fine sanding. Scraping is generally less effective on soft species such as pine or butternut. 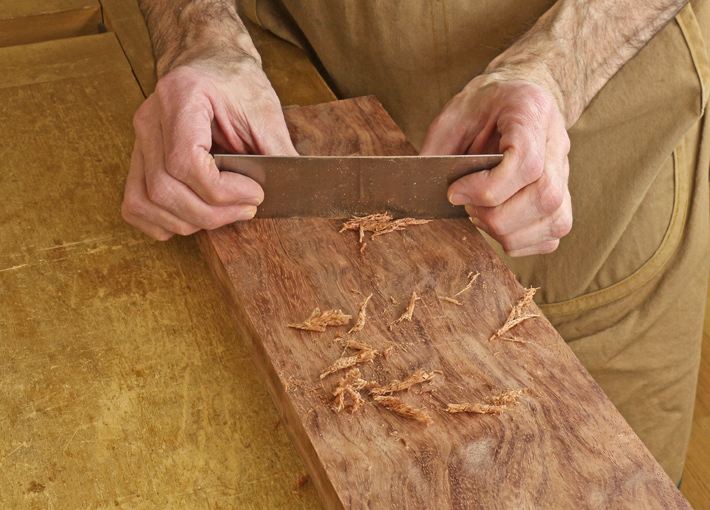 In use, the hand scraper is generally held with both hands and bent so that it meets the wood in a curve. This tensions the edge to prevent it from skipping or chattering on the wood. The curve also prevents the corners from digging in. It may also be helpful to skew the scraper relative to the direction you are pushing. The scraper is tilted to just the angle where the edge starts to bite into the wood. This is intuitive and easy to do.

Of course, there are variations in even a tool as simple as a hand scraper. The main options are in thickness. The most commonly recommended thickness for general work is .032″, which is a good first choice. I find that to be a bit stiff and usually prefer a .024″ scraper for control and comfort. For spot clean up and other delicate work, a more flexible .020″ scraper is handy. Scrapers are usually about 6″ wide — shorter feels awkward — and 2″- 2 3/8″ tall. The photo below shows scrapers, from left to right, in thicknesses of .020″, .024″, and .032″. 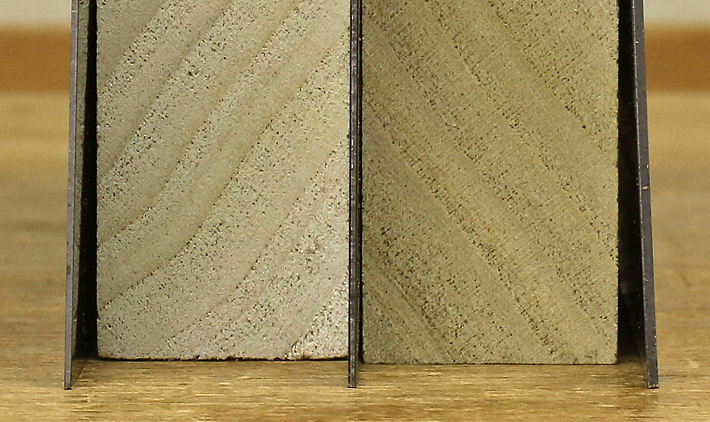 The best quality hand scrapers only cost about $6 – $8. They will last many years.

Hand scrapers can also be used on curved surfaces. The whale-shaped scraper, below, is very versatile. (The little scraper next to it is surprisingly handy for touch up work.) 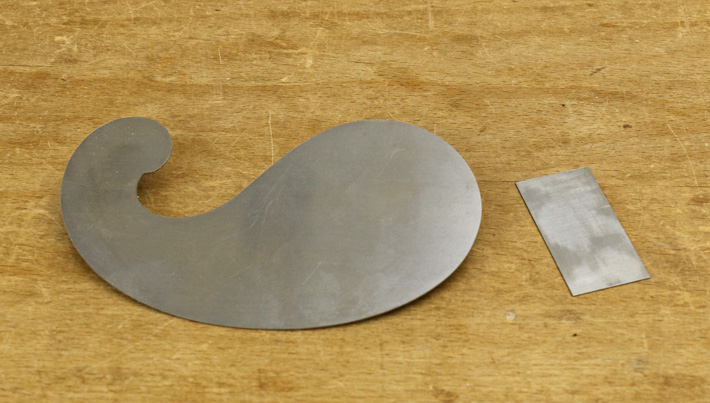 The odd-looking scrapers in the next photo contain several concave and convex edges with different radii. These are particularly useful for shaped edges and moldings. 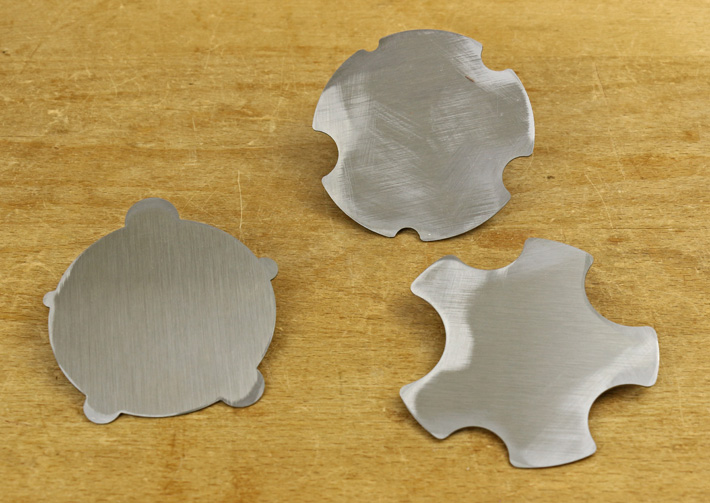 The technique of sharpening scrapers is beyond the scope of this article but I would like to cover this in detail in a future post. The basic idea is that the edge of the scraper is filed, then stoned, neatly square and smooth. Scraper steel is hard enough to hold an edge but soft enough to distort easily under the pressure of a very hard burnishing rod, which is pushed along the edge to form the hook. This is not hard to do. Ignore talk about sharpening a scraper being difficult or part of some arcane science.

Without a doubt, hand scrapers should be in your tool kit right from the start. Later, for scraping larger areas, a scraper plane is helpful. These tools are about the same in principle but the frame of the plane helps to maintain a flat surface, and the weight and handles add power to the stroke. The Stanley #80 cabinet scraper has a short sole and is favored by many, though I find the larger scraper plane by Veritas, shown below, to be much more effective. 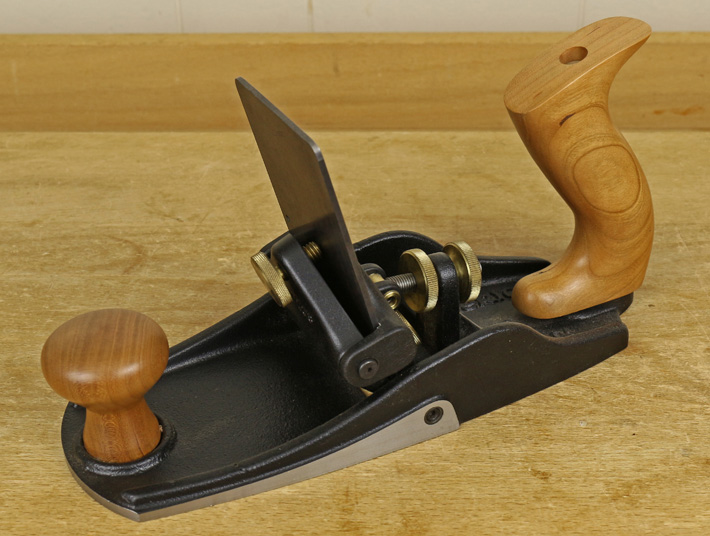 Build sleds, fences, jigs and cauls that no shop should be without.Enroll Now »